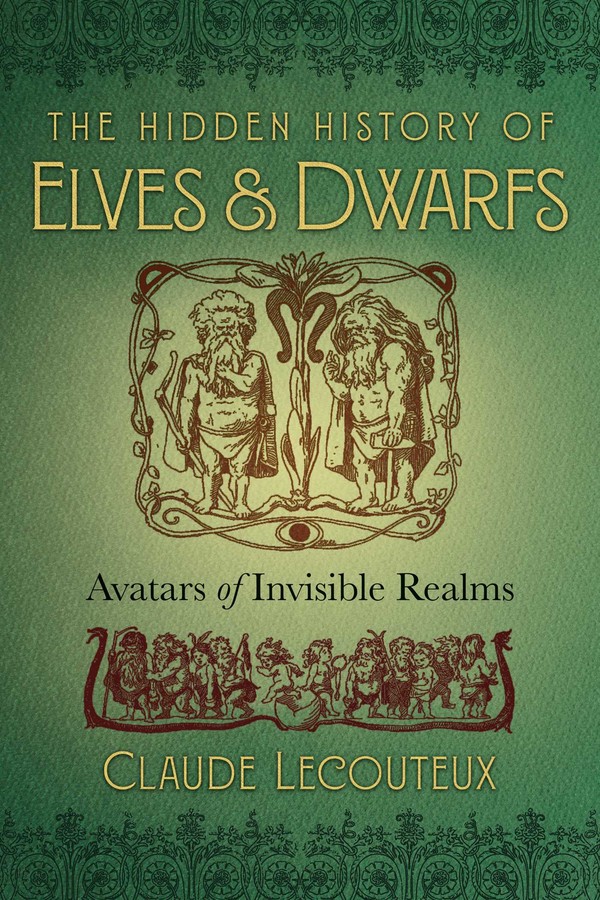 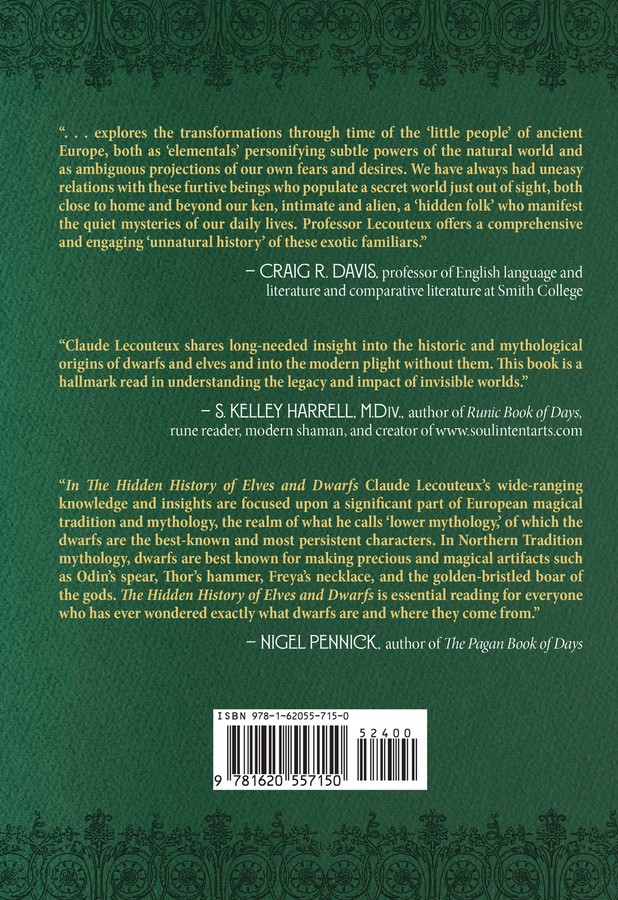 The Hidden History of Elves and Dwarfs

A comprehensive examination of the intertwined mythology, folklore, and literary history of the little people

Most people are familiar with the popular image of elves as Santa’s helpers and dwarfs as little bearded men wearing red caps, who are mischievous and playful, helpful and sly, industrious and dexterous. But their roots go far deeper than their appearance in fairy tales and popular stories. Elves and dwarfs are survivors of a much older belief system that predates Christianity and was widespread throughout Western Europe.

Sharing his extensive analysis of Germanic and Norse legends, as well as Roman, Celtic, and medieval literature, Claude Lecouteux explores the ancient, intertwined history of dwarfs and elves. He reveals how both were once peoples who lived in wild regions as keepers of the secrets of nature. They were able to change their size at will and had superhuman strength and healing powers. They were excellent smiths, crafting swords that nothing could dull as well as magical jewelry, and often entered into the service of lords or heroes. They were a part of the everyday life of our ancestors before they were transformed by fairy tales and church texts into the mythical creatures we know today. Lecouteux shows how, in earlier folklore, elves and dwarfs were interchangeable, gradually evolving over time to express very different kinds of beings.

Revealing the true roots of these helpful and powerful beings, including an in-depth exploration of one of the most famous dwarf/elf/fairy beings of the Middle Ages, Auberon or Oberon, also known as Alberich, Lecouteux shows how the magic of dwarfs and elves can be rekindled if we recognize their signs and invite them back into our world.
Chapter Two

The Germanic Literature of the Middle Ages

It was around the years 1023-1050 that a dwarf was mentioned for the first time in the literature of the German-speaking regions, but non-literary texts show that this figure was known long before this date. The Ruodlieb, which is considered to be the first romance of the Middle Ages, was written in Latin, based on legends whose traces we can find in later works. It tells of the encounter between a knight and a dwarf, and this encounter deserves a momentary stop as it includes all the principle characteristics of the German dwarf found in subsequent tales.

Ruodlieb sees a dwarf at the entrance to a cave and captures him. In return for sparing his life, his prisoner promises Ruodlieb that he will show him the place where the treasure of Kings Immunch and Hartnuch is hidden; then he foretells his future. Ruodlieb will win the hand of the fair Heriburg, but it will only be at the cost of much spilled blood if he does not follow his counsel. The suspicious knight demands pledges; so his captive calls for his wife. She emerges from the cave and offers to be the knight’s hostage until he has made good on his promises. It is finally said that this figure “is quite beautiful despite her small size.”

Unfortunately, the eighteenth fragment of the Ruodlieb stops here.

We should keep in mind the essential information gleaned from this story: dwarfs live in caves, they know hidden secrets, and they have the gift to foretell the future. Furthermore, they inspire distrust in those they meet, which implies not all of them mean well.

All the later texts confirm what the Ruodlieb says and add some finishing touches.(29) The dwarfs dwell inside hollow mountains that are veritable underground palaces sparkling with gems. They have wives and children, suzerains, and vassals and live in a hierarchical society that is a perfect reflection of medieval society. There is a nobility with a king at its head. Only peasants are not mentioned, but they rarely appear in courtly literature. Dwarfs experience the same passions as men, especially the torments of love and the goad of ambition. They wage war among themselves to expand their domains, in other words to conquer other hollow mountains. They have hereditary enemies: giants and dragons. Their amusements agree on all points with those of the human world: they love music, singing, dancing, good meals washed down with wine or mead; they organize jousts and tourneys on the green meadows that extend before their underground palaces; and finally, they know how to speak courteously. The great majority of them are well-meaning and helpful; only the Arthurian romances, in agreement with romance literature in general on this point, portray perfidious or thieving dwarfs.

Dwarfs can appear in one of three ways in the Germanic regions. They can take the appearance of bald, bearded old men, or resemble extremely beautiful children, or else look like knights. The first type is quite rare in the Middle Ages, although it is the predominant type in later folk tales. It is vouched for by only three texts.(30) The child dwarf is equally rare and only appears in the Gest of King Ortn.(31) These first two types are incontestably the oldest and the least contaminated, but they were supplanted by that of the dwarf knight, a reflection of the era in which the poets lived whose work I am using--and they almost vanished completely from the writings. Their resurgence several centuries later indicates nevertheless that they continued to live in oral folk traditions.

In the romances, dwarfs are generally between twenty-seven to forty-four inches in height. Though they have small feet and short legs they have the strength of twelve to twenty men, which some authors explain is due to their possession of magical items. (The physical weakness of a dwarf is an add-on motif: it was thought that a small body could not possess great strength.)

Dwelling inside mountains or even underground, and sometimes even behind a waterfall, the dwarf knew all the secrets of nature: the virtues of the waters, stones, metals, and herbs. Of all the monstrous humans of Medieval German literature, the dwarf is the only one to wield magical powers. He knows how to turn invisible, thanks to a magic cape (Tarnkappe) or headgear (Tarnhelm), an object that plays an important role in the legend of Siegfried.

The dwarf can also travel in an instant to wherever he wishes to go, like the fairies in the romances. He owns rings in which marvelous stones are set, and belts that multiply the strength of the wearer, or provide protection from poverty, hunger, and so forth. He owns certain gems that would be quite useful for students of living languages because when placed beneath the tongue, they make it possible to understand and speak foreign languages. They also prevent thirst and prevent dragons from attacking; in short, nothing is a priori impossible for them. The dwarf knows the future, which implies a connection to the other world, but a later, rational explanation redefines this knowledge as the fruit of the study of necromancy, which, during the Middle Ages, was synonymous with sorcery.
Claude Lecouteux

“. . . explores the transformations through time of the ‘little people’ of ancient Europe, both as ‘elementals’ personifying subtle powers of the natural world and as ambiguous projections of our own fears and desires. We have always had uneasy relations with these furtive beings who populate a secret world just out of sight, both close to home and beyond our ken, intimate and alien, a ‘hidden folk’ who manifest the quiet mysteries of our daily lives. Professor Lecouteux offers a comprehensive and engaging ‘unnatural history’ of these exotic familiars.”

“Claude Lecouteux shares long-needed insight into the historic and mythological origins of dwarfs and elves and into the modern plight without them. This book is a hallmark read in understanding the legacy and impact of invisible worlds.”

“In The Hidden History of Elves and Dwarfs Claude Lecouteux’s wide-ranging knowledge and insights are focused upon a significant part of European magical tradition and mythology, the realm of what he calls ‘lower mythology,’ of which the dwarfs are the best-known and most persistent characters. In Northern Tradition mythology, dwarfs are best known for making precious and magical artifacts such as Odin’s spear, Thor’s hammer, Freya’s necklace, and the golden-bristled boar of the gods. Apart from making jewelry, weapons, and armor for the gods, the dwarfs have their own magical attributes. Aubéron has a bow whose arrows always hit the target, an impenetrable chain-mail coat, a horn, and magic cup.

Dwarfs are remembered in ancient Scandinavian place-names, and folktales from all over Europe embed the memory of dwarfs in the fabric of storytelling. Emerging from dense forests, mysterious lakes, burial mounds, and hollow mountains, sometimes they aid humans, but often they are unreliable assistants, for they have their own agendas. They exist within a world of fluid boundaries where transformation plays a major role.

Denizens of an otherworld that interpenetrates the human world, dwarfs and elves were demonized by churchmen and conflated with Biblical evil powers. The realm of elves and dwarfs was much wider and far more diverse than that. Claude Lecouteux defines the real difference between sprites, elves, dwarfs, duses, trolls, and various forms of giants that existed in human perception before their demonization. The Hidden History of Elves and Dwarfs is essential reading for everyone who has ever wondered exactly what dwarfs are and where they come from.”

– Nigel Pennick, author of The Pagan Book of Days

"Modern studies rather tend to emphasize the cultural and psychological over the mythological. Nevertheless, Lecouteux marshals his scholarship and argues rationally, making a plausible case and maintaining interest throughout. The translation makes this an easy read, full of engrossing material and engaging ideas. Also, it is good to hear a continental perspective on these matters."

"I found this book interesting with all the history from various cultures that Mr. Le Couteux was able to use to unravel a web that has been too long in place. I, myself, have always felt that elves were akin to Faery kind. So, I have ever had a place for them in my life and home. I have seen dwarves as energy to work with when doing some creative process, unusual when working with crystals and anything metal. And now, I know I was on the right track in the energy signatures that I was working on within my work."

The Hidden History of Elves and Dwarfs