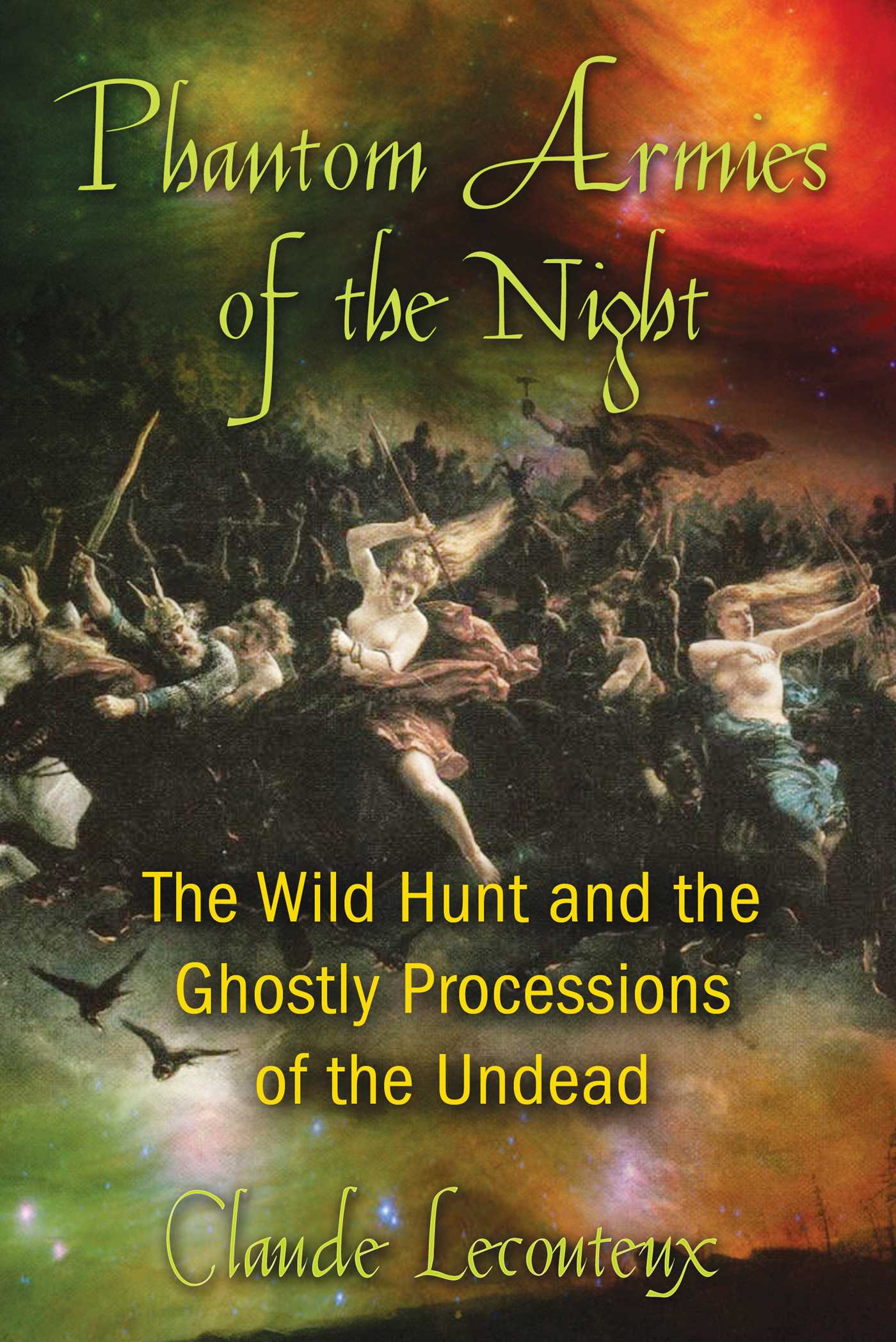 Phantom Armies of the Night

The Wild Hunt and the Ghostly Processions of the Undead

By Claude Lecouteux
LIST PRICE £10.99
PRICE MAY VARY BY RETAILER

• Recounts the myriad variations of this legend, from the Cursed Huntsman and King Herla to phantom armies and vast processions of sinners and demons

Once upon a time a phenomenon existed in medieval Europe that continuously fueled local lore: during the long winter nights a strange and unknown troop could be heard passing outside over the land or through the air. Anyone caught by surprise in the open fields or depths of the woods would see a bizarre procession of demons, giants, hounds, ladies of the night, soldiers, and knights, some covered in blood and others carrying their heads beneath their arms. This was the Wild or Infernal Hunt, the host of the damned, the phantom army of the night--a theme that still inspires poets, writers, and painters to this day. Millennia older than Christianity, this pagan belief was employed by the church to spread their doctrine, with the shapeshifters' and giants of the pagan nightly processions becoming sinners led by demons seeking out unwary souls to add to their retinues. Myth or legend, it represents a belief that has deep roots in Europe, particularly Celtic and Scandinavian countries.

The first scholar to fully examine this myth in each of its myriad forms, Claude Lecouteux strips away the Christian gloss and shows how the Wild Hunt was an integral part of the pagan worldview and the structure of their societies. Additionally, he looks at how secret societies of medieval Europe reenacted these ghostly processions through cult rituals culminating in masquerades and carnival-like cavalcades often associated with astral doubles, visions of the afterlife, belief in multiple souls, and prophecies of impending death. He reveals how the nearly infinite variations of this myth are a still living, evolving tradition that offers us a window into the world in which our ancestors lived.

Chapter 1
The Good Women Who Roam the Night

“Away with day, for the night is mine!”
What the Wild Hunt (Güestia) says in Asturias

Certain nights play host to the passage of all kinds of nocturnal troops. These legions were sometimes composed of the living led by Diana and Herodias, Satia and Dame Abonde, or alleged witches whose doubles had quit their sleeping bodies. Sometimes they gathered together the dead, revenants, or damned souls who could find no rest (the Mesnie Hellequin, Oskoreia, Asgardreia). Finally, demons or the devil in person, or their minions, could be seen walking or riding in the darkness. On every occasion these figures were associated with a specific kind of activity, and it is worth examining the accounts in detail if we wish to avoid the erroneous combinations and confusion that make understanding these nocturnal throngs so difficult. Moreover, this confusion is not due solely to the nineteenth and twentieth-century researchers but goes all the way back to the Middle Ages.

The Journey of the Double

We encounter the first instance of the belief in the Ladies of the Night in a canon attributed to the Council of Ancyra that met in 314. However, this canon’s first known appearance was in 872 in the capitularies of Charles the Bald. It was then picked up anew in 899, in a treatise by Régino, the Abbot of Prûm.

This also is not to be omitted, that certain wicked women, turned back to Satan, seduced by demonic illusions and phantasms, believe of themselves and profess to ride upon certain beasts in the nighttime hours with Diana, the Goddess of the Pagan, or Herodias, and an innumerable multitude of women, and to traverse great spaces of the earth in the silence of the dead of night, and to be subject to her laws as of a Lady, and on fixed nights be called to her service.

This text, known as the Canon Episcopi, inserted around 1066 by Burchard of Worms in his Decretum, offers evidence that the church was attacking an allegedly pagan belief that was still vigorous enough to be viewed as dangerous.

Have you believed what many women, turning back to Satan, believe and affirm to be true, as you imagine in the silence of the night when you have gone to bed and your husband lies in your bosom, that while you are in bodily form you can go out by closed doors and are able to cross the spaces of the world with others deceived by the like error and without visible weapons slay persons who have been baptized and redeemed by the blood of Christ . . .

Burchard records here a belief that is the source of the witches Sabbath: certain women possess the ability to propel flesh and blood doubles (alter egos) of themselves to roam at great distances committing evil deeds, killing people, eating them, placing pieces of wood or straw in the place of their hearts, then reanimating them . . . He goes on more explicitly:

Have you believed as certain women are accustomed to believe, to wit that by virtue of other limbs provided you by the devil (Christian interpretation of creating a double) you have crossed in the silence of the quiet night through closed doors to fly into the clouds where you have waged battle on others [women], both inflicting and receiving wounds.

These women who roam the night fight the same battle as the sixteenth-century Benandanti, who performed a functional ritual. Here the representatives of good and evil, the fertility and sterility of the land, would confront each other. The wicked individuals of one of these bands would steal the seeds, the others, working for good, would try to hold the wicked in check. The victory of the “good folk” over the wicked ones would make it possible for the coming year to be a fruitful one.

Alongside the chapters of the Decretum that link these women with Satan, we find another note on the same subject, but one that is more interesting because it introduces a well-known figure from folk belief who persisted into relatively recent times, Holda, in other words, the “Benevolent One.”

Have you believed that there is any woman who can do that which some, deceived by the devil, affirm that they must do of necessity or by his command, to wit with a host of devils transformed into the likenesses of women, she who common folly calls Holda, must ride on certain beasts during special nights and be counted as members of the company of demons.

Burchard does not understand the phenomenon of a split personality and attributes it to a “necessity” or a “command.” In fact, it is rather a gift, an atavism. According to the beliefs of earlier times, every human being possessed several “souls,” with the word soul meaning “vital principal” in this instance. Among these souls there is the external soul, which the ancient Germans called the hamr, and which Latin texts refer to as animus or spiritus. It is able to quit the body when it is sleeping,is in a coma or a trance, or when it is afflicted by a serious illness. It can then go about its own business in the form of an animal or human. The clerics were unable to grasp this, observing only that the body was still actually present before their eyes, and they attributed the stories of people whose double had rejoined their bodies to tricks and glamors of the devil.

“Claude Lecouteux marshals what must be a virtually complete recounting of stories from throughout Europe involving nocturnal sightings of the Army of the Dead, also known as the Wild Hunt, and traces their thematic origins from pre-Christian times through the filter of the medieval church. His primary sources are exhaustive, ranging from the medieval period to 20th-century accounts by various authors along with church records and folktales. His secondary sources draw extensively on scholarship, particularly from France and Germany. The connection of the figure now known as Harlequin and other figures to rites for the dead is particularly well presented. The Wild Hunt was clearly associated with the spirits of the dead but also with fertility, fecundity, and certain times of the year. Lecouteux explores these and many more aspects of a civilization that both lies behind us and is in faint form still present.”

“One of the most frightening and persistent visions recorded throughout Indo-European history, legend, and folklore is the spectral array of the Wild Hunt. Claude Lecouteux’s brilliant scholarly detective work results in the definitive study of these ghastly processions that have haunted the night skies of Europe for millennia. Phantom Armies of the Night is teeming with tales that will fascinate, delight, and terrify--often all at once.

– Michael Moynihan, author of Lords of Chaos: The Bloody Rise of the Satanic Metal Underground and tra

“This book is an excellent jumping-off point for scholars wishing to untangle the lines between early Christianity as it blended and then separated from European Paganism. Excellent scholarship along with thought provoking legends and a light hand on interpretation makes this an outstanding addition to a historian’s library.”

“...clearly associated with demons and spirits of the dead and the author describes this folklore with eerie tales that will fascinate you.”

“This excellent book...is the most comprehensive study of the subject so far written and it is very highly recommended.”

“Overall this work is wonderfully rich in detail and gripping material centered around a subject which is uncommon in modern sociological, or spiritual works. This volume is well worth a read for those interested in historical mythological themes.”

“This excellent book by a former professor of medieval literature and civilization at the University of Sorbonne in Paris is a continuation of the author’s ongoing research into the mythological and folkloric aspects of death and popular beliefs about the survival of the soul and the afterlife.”

“I would recommend this book to anyone who loves European and Religious history and lore, as well as those seeking to understand the differences between Christian and Pagan worldviews. It will make an interesting addition to their library.”

“This book is ambitious, thick with information,and impressive...After finishing it, I felt as if it is the kind of book one likes to have on the shelf for reference and consultation, rather than the kind of book one reads from start to finish in the usual way. Unless, of course, you are an academic, who enjoys reading analytical books for fun (as I do). Still even if you are not an academic, I’d recommend it to you anyway.”

“This is an exciting and absorbing study of a form of folk mythology that has spanned Europe for more than a thousand years. Lecouteux provides both a mass of valuable information and a viable working hypothesis of explanation.”

Phantom Armies of the Night

The Wild Hunt and the Ghostly Processions of the Undead

By Claude Lecouteux
LIST PRICE £10.99
PRICE MAY VARY BY RETAILER