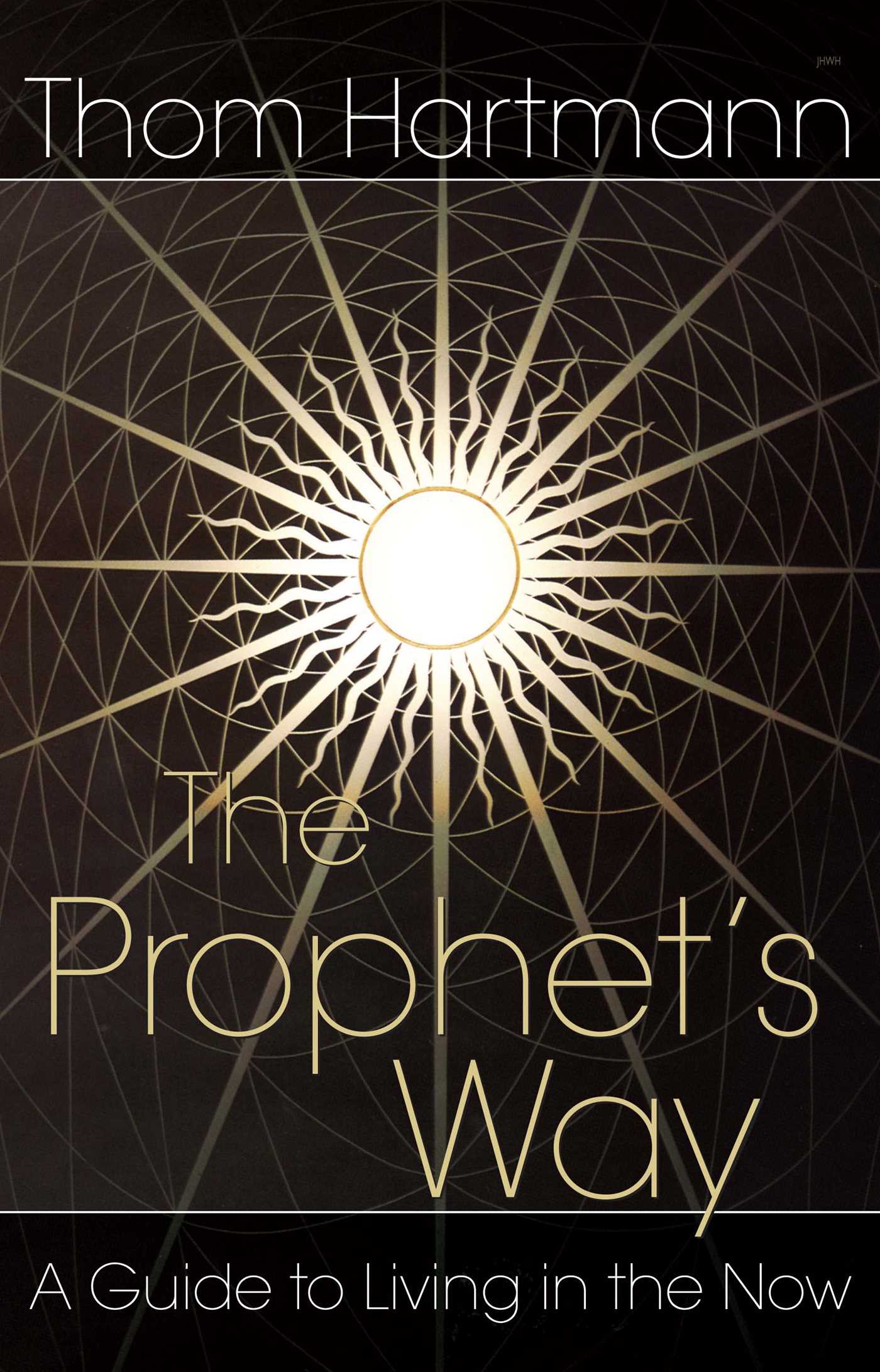 A Guide to Living in the Now

By Thom Hartmann
LIST PRICE £16.99
PRICE MAY VARY BY RETAILER

In the course of his work for the charitable organization Salem, Thom Hartmann personally witnessed famine in Uganda, chaos in Russia, and genocide in Colombia--all signs that modern cultures have lost the connection to the sacred, both within and without, that was emblematic of older cultures. To truly flourish, the human spirit needs to be present in its surroundings and attuned to the Now. It needs to act on what it knows is possible and to experience how the smallest actions can have massive consequences. This is the reality of the Prophet&#8217;s Way, a path--both literal and figurative--that the author walked with his spiritual mentor Herr M&#252;ller that skirts the edge of the precipice, where one can experience a truly spontaneous life under seemingly overwhelming and impossible circumstances. In The Prophet&#8217;s Way, Thom Hartmann shares his intense spiritual journey, a story that melds recent discoveries in science with ancient truths. Through insightful and engaging vignettes Hartmann teaches that accepting the challenge to have faith means living on the edge--remaining in the moment--because it is here where the material and spiritual worlds meet. He offers readers a unique view into his experiences of expanded consciousness, providing a powerful example of how we can re-create our future by reconnecting to the sacred heartbeat of the world.

A Prayer and an Answer
A week or two before Christmas, I was sitting in my meditation chair about 3 a.m. on a snowy night. There was a huge window in front of me, more than six feet square, and it looked out on trees covered with a thick blanket of snow; wet flakes fell to the moonlit ground. The snow was coming and going, clouds breaking, and the moonlight became bright and dim as the clouds moved. I could smell the old house and the clean freshness of air that leaked from outside around the window frame. I'd been meditating for a few hours, and now was just sitting in the chair, looking out at the snow, feeling quite peaceful. I said a prayer of thanks, my favorite prayer.

Then the walls of the room started to shimmer. I could see through the trees in front of me, and for miles around. My consciousness was liquid and filled with light, streaming out of me like light from a star, yet bringing back to my mind everything it touched. My heart was filled with an ecstatic joy, but there was also a small and remote part of my mind that knew that I wasn't breathing.

I wondered if I was having a heart attack, if I was dying. I could feel the snow even though it was outside and I was indoors, could taste its cold moistness, could smell the trees, the distant exhaust of cars. It was as if I was everywhere in the world all at the same moment, with the things closest to me closer than those far away. Most vividly, I could feel the life in everything around me. And that rational part of my mind whispered at me again that my heart wasn’t beating. I turned my attention to my inert body, and suddenly the entire world collapsed into a single bright point, then I was back in my body looking out the window. My heart raced, I gasped for breath, and clutched the arms of the chair.

"What was that?" I asked the air, although I intuitively knew that I’d finally found the answer to my lifelong question about the true nature of consciousness: I had just touched it.

A wave of peace flowed over me, something close to the heart of God.

"Wait," came the answer, a voice deep within my mind.

"I want to share this with others," I said. "I should sell my business and go out and teach again."

And so I waited, meditating daily and going on with my life and business, for the next three months.

As I walked past the phone it rang, and I turned and picked it up. The voice on the other end sounded distant, but was familiar.

"Thomas?" It was Don Haughey, one of Master Stanley's students, who to this day is the pastor of a small church in southern Michigan and runs a holistic healing center near Coldwater. At that time he was also a senior executive with the Holiday Inn chain, and he said he was calling from Germany.

" I can't tell you over the phone," he said. "It would just sound too crazy, and there isn't time. But your face just appeared in front of me not five minutes ago, and I knew I had to call you. There’s a man here you have to meet and a place you have to see. We need you and you need this: trust me."

" It's a little town in the middle of nowhere in Germany. Called Stadtsteinach. I'll pick you up tomorrow morning in Nuremberg: there's a flight you can catch tonight out of Detroit."

I started to tell Don how busy I was, and then remembered the prayer I'd just uttered. "I'll be there," I said.

Don met me the next morning at the airport, and as we drove the two-hour trip from Nuremberg to Stadtsteinach, he tried to tell me why he'd demanded I come.

"There's this man here," he said. "His name is Gottfried Miller, and he's the most extraordinary human I've ever met. If it's true that at any one time there are always a few saints on Earth, he must be one of them."

"You'll see," Don said. "You'll feel it when you meet him."
Thom Hartmann

Thom Hartmann is the host of the nationally and internationally syndicated talkshow The Thom Hartmann Program and the TV show The Big Picture on the Free Speech TV network. He is the award-winning New York Times bestselling author of 24 books, including Attention Deficit Disorder: A Different Perception, ADHD and the Edison Gene, and The Last Hours of Ancient Sunlight, which inspired Leonardo DiCaprio’s film The 11th Hour. A former psychotherapist and founder of the Hunter School, a residential and day school for children with ADHD, he lives in Washington, D.C.

“This is the most important book I have ever read. . . . Now I can do no less than give my remaining years to its message.”

– Joseph Chilton Pearce, author of The Crack in the Cosmic Egg and The Biology of Transcendence

“This is the most important book I have ever read. . . . Now I can do no less than give my remaining years to its message.”

– Joseph Chilton Pearce, author of The Crack in the Cosmic Egg and The Biology of Transcendence

“The Prophet’s Way produces its own butterfly effect: the simple act of reading it can change your life.”

– Michael Hutchison, author of Mega Brain Power and The Book of Floating

“Thom Hartmann is an absolutely original mind, with an original way of looking at the world: he has made an enormous contribution to our culture.”

“This book represents the path of a spiritual initiate and the signposts he met along the way. We Coptics are honored that Thom’s path included Hamid Bey and Master Stanley, two great lights of the 20th century.”

“Thom Hartmann is one of the great adventurers of our time, both in the world at large and the world of ideas.”

“Thom Hartmann has a capacity to go to the essence of things. He does so with power and beauty.”

– Wayne Teasdale, author of The Mystic Heart: Discovering a Universal Spirituality in the World’

“The Prophet’s Way draws you in like a novel, keeping you on the edge waiting to see what happens next, yet is a true story. Like a painting by a great master that was painted over and hidden for centuries, Thom Hartmann peels away the layers of distortion heaped on original visions of religion and faith which existed 2,000 years ago, revealing once again the essence of humanity, spirituality, and mysticism. This book helped me make a major change in my life for the better.”

“Thom Hartmann exposes many of the ugly truths hiding beneath the surface of contemporary ‘civilization.’ Hartmann’s book masterfully combines autobiography, science, and Christian spirituality and shows us how to rehabilitate our world with acts of compassion rooted in spiritual humility and faith in the Creator of all creatures and cultures. Easy to read, hard to practice.”

“If you do not think that one person can do much--can do enough--to make a real difference, I urge you to read The Prophet’s Way. It will inspire and excite you. For it will show you in real life terms just what one person can do, and lift you to a place of new determination to play your rightful role in the Creation of Tomorrow.”

“Thom Hartmann is one of those people who puts it all together for us, explaining not only what has seriously gone wrong in the world but, even more important, all that can still go right. He is an awakener of the highest order.”

– Marianne Williamson, author of A Return to Love and Everyday Grace

A Guide to Living in the Now

By Thom Hartmann
LIST PRICE £16.99
PRICE MAY VARY BY RETAILER