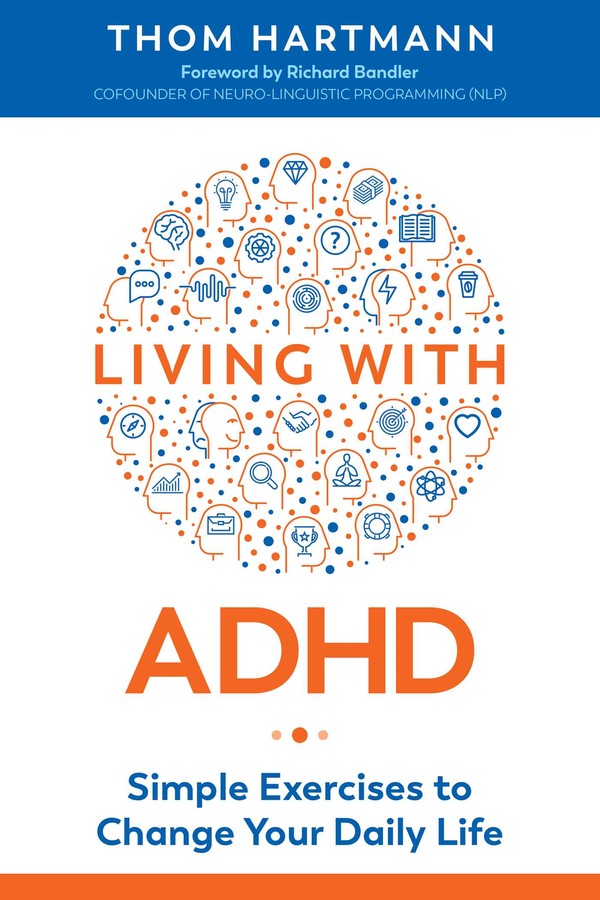 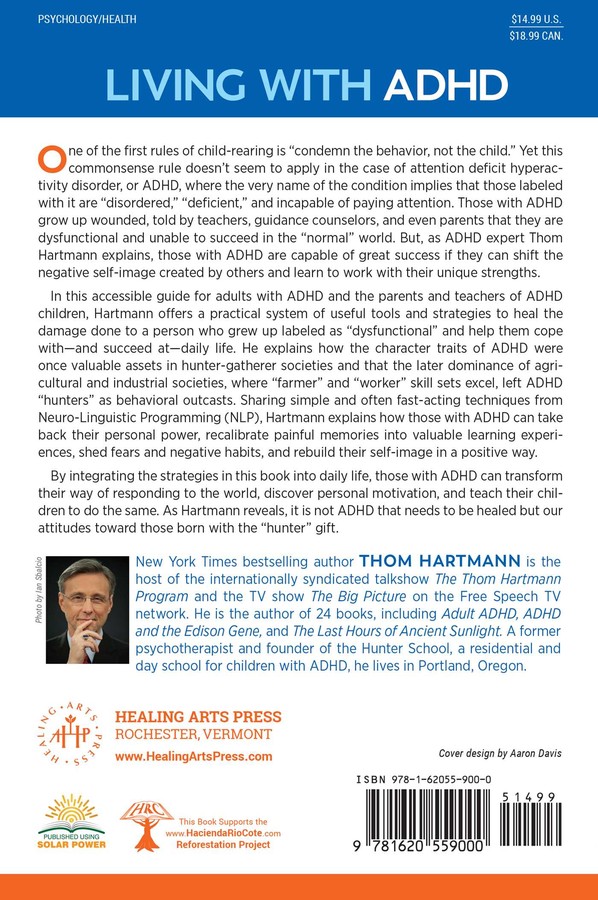 One of the first rules of child-rearing is “condemn the behavior, not the child.” Yet this commonsense rule doesn’t seem to apply in the case of attention deficit disorder, or ADHD, where the very name of the condition implies that those labeled with it are “disordered,” “deficient,” and incapable of paying attention. Those with ADHD grow up wounded, told by teachers, guidance counselors, even parents that they are dysfunctional and unable to succeed in the “normal” world. But, as ADHD expert Thom Hartmann explains, those with ADHD are capable of great success if they can shift the negative self-image created by others and learn to work with their unique strengths.

In this accessible guide for adults with ADHD and the parents and teachers of ADHD children, Hartmann offers a practical system of useful tools and strategies to heal the damage done to a person who grew up labeled as “dysfunctional” and help them cope with--and succeed at--daily life. He explains how the character traits of ADHD were once valuable assets in hunter-gatherer societies and that the later dominance of agricultural and industrial societies, where “farmer” and “worker” skillsets excel, left ADHD “hunters” as behavioral outcasts. Sharing simple and often fast-acting techniques from neurolinguistic programming (NLP), Hartmann explains how those with ADHD can take back their personal power, recalibrate painful memories into valuable learning experiences, shed fears and negative habits, and rebuild their self-image in a positive way.

By integrating the strategies in this book into daily life, those with ADHD can transform their way of responding to the world, discover personal motivation, and teach their children to do the same. As Hartmann reveals, it is not ADHD that needs to be healed but our attitudes toward those born with the “hunter” gift.

From Chapter 3. Life Is What We Think It Is

A good starting point for this redefinition process is the notion of self-identity--where a person fits into the overall larger scheme of social and cultural life.

For example, consider what would happen if you were to dump the label of diseased, disordered, or defective. How would your life be different if, instead, you started looking at your or your child’s ADHD as “Hunter qualities,” and searched out those particular “Hunter skills” which are the most useful? Using this model of reality, you would now have the power to identify the behaviors and strategies you have which you’d like to keep, those you’d like to get control of, and those you’d like to get rid of.

Limiting beliefs are those stories we tell ourselves which cause us to sabotage our own best efforts. They hurt and cripple our lives, diminish our abilities, or hold us back from reaching our goals. Everyone has limiting beliefs. Everyone can change them. Most people don’t realize it’s possible to change them, and, for that matter, don’t even realize that they ever made a decision in their lives about what to believe and what not to believe.

One very effective way to change limiting beliefs is to find another person who has the same “problem” but who apparently doesn’t share that limiting belief--a person who has figured out some other, more useful belief and is living it in their life. Particularly useful in the context of ADHD are historical figures who sure look like they must have had ADHD--like Winston Churchill, John Kennedy, or Ben Franklin--and read their biographies to learn how they overcame their ADHD symptoms (Franklin’s autobiography is particularly useful for this). Visualize that person living their life with their empowering belief, what would be for you the new belief. Then visualize yourself in that same situation. Check out how you feel about it. If it feels ok, then step into yourself in that visualization and experience the reality of the new belief. Ask yourself what it will sound and smell and feel like as a way of moving right into the experience.

Presupposing Change in Beliefs and Behaviors

One of the most effective ways to facilitate and ensure change is to convince people that the change is inevitable. Doing this on a conscious level, however, is often somewhere between difficult and impossible. It’s much easier to speak to the unconscious.

For example, a child was brought to see me who, at the age of 8, was still dragging around his childhood blanket and sucking his thumb. He’d been hassled considerably about it, mostly by his older sister and his well-intentioned grandparents, who lived nearby. As a result, he’d developed a lot of anxiety around the issue, and, it came out, actually believed that he may be dragging the blanket around for the rest of his life. That thought, as much as any other, haunted him.

So instead of challenging his reality at a conscious level, I posed a question which presupposed the change as already being in the process of happening. In the course of a friendly conversation about people we’ve all known who’ve had childhood habits which eventually went away, I said, “I wonder how many weeks it’ll be before you feel good knowing that your blanket is back in your bedroom while you’re somewhere else?”

He nodded, as if he was slightly confused but wanted to agree, and then I changed the subject back to talking about his friends and other things. But that one sentence was what the entire session was all about: it delivered to his unconscious mind several direct statements of “already a done-deal fact”: 1) That a time would come when he’d no longer need to drag around his blanket; 2) that it would actually feel good; and 3) that it would happen within a period of weeks. Within three or four minutes of my having made that statement, I (and his mother, who was sitting in on the session) noticed a rather dramatic change in his body posture and tone of voice when he discussed his blanket. Previous to the statement, he’d pull his knees up to his chin and hold the blanket to him; after it, he simply sat with it on the chair beside him in his right hand. The change had already begun to work.

Such interventions are classic examples of the work of Erickson, Bandler, and Grinder, among others. The, “I wonder when . . .” statement is a powerful way to influence people, particularly children, without directly challenging their limiting beliefs. It goes around the beliefs, to the back-door of the mind as it were, and delivers to the unconscious mind an opportunity to experience a the possibility of a new reality.

In another similar case, a child who’d been diagnosed with ADHD largely because of his dislike of homework heard, “I wonder how long it’ll be before you discover the secret of making homework fun that so many of the A-grade students know?” Notice the presuppositions in there: the child then began a hunt to “discover the secret,” and eventually found it!

Whether you’re dealing directly with an ADHD behavior (which is a very loose and slippery definition) or a specific behavior which may arise from, have to do with, or impinge on the life of a child with ADHD, this technique can be very useful.

I wonder how many hours it’ll be before you try it out with your child in a way that’s helpful, supportive, and healing?
Thom Hartmann

Thom Hartmann is the host of the nationally and internationally syndicated talkshow The Thom Hartmann Program and the TV show The Big Picture on the Free Speech TV network. He is the award-winning New York Times bestselling author of 24 books, including Attention Deficit Disorder: A Different Perception, ADHD and the Edison Gene, and The Last Hours of Ancient Sunlight, which inspired Leonardo DiCaprio’s film The 11th Hour. A former psychotherapist and founder of the Hunter School, a residential and day school for children with ADHD, he lives in Washington, D.C.