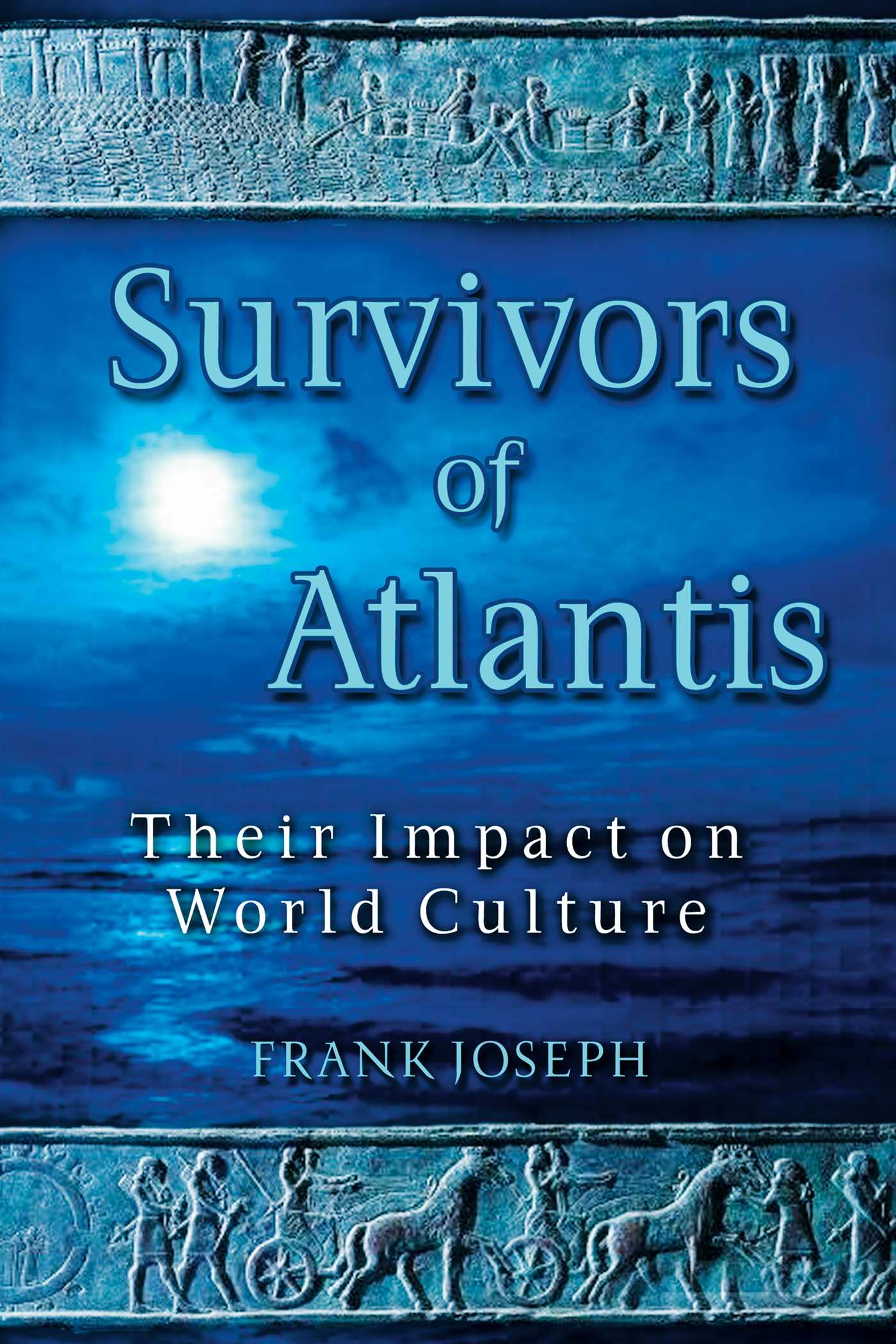 Their Impact on World Culture

By Frank Joseph
LIST PRICE £7.99
PRICE MAY VARY BY RETAILER

• The sequel and companion volume to The Destruction of Atlantis

• Studies the connections between the world-conquering war the Atlanteans launched and the quartet of natural catastrophes that ravaged the earth more than 5,000 years ago

Archaeologists have long puzzled over the evidence suggesting highly sophisticated copper mining activities in the area of the Great Lakes some 5,000 years ago. Menomonie Indian tradition speaks of fair skinned mariners who had come in the past to “dig out the shiny bones” of the Earth Mother. Plato, meanwhile, recorded that Atlanteans provided an exceptionally high grade of copper that was no longer available in his time. In this sequel to The Destruction of Atlantis, Frank Joseph argues that the Menomonie Indians’ mariners were Atlanteans and that the destruction of Atlantis by war and natural catastrophe brought about the end of Bronze Age civilization. Furthermore, Atlantis’s survivors dispersed to all sides of their former island empire into Western Europe, the Near East, and North and South America.

In Survivors of Atlantis Frank Joseph provides an in-depth study of the Atlantean war and the intimate connections it had with the last of four great cosmic catastrophes generated by the cyclical return of a comet and its debris. This quartet of natural disasters was followed by mass migrations recorded in the histories of such diverse peoples as the Incas of Peru, the Celtic Irish, the Classical Greeks, and the Aztecs of Mexico. Where the archaeology, mythology, astronomy, and geology of these cultures coincide, a common thread is exposed: Atlantis. Joseph shows that the fate of the Atlantean empire is the story of early civilization and reveals Atlantis to be a credible part of the world’s history.

Chapter 15
The Greater Arrival from Atlantis

And after Osiris banished barbarism from Egypt, he planted the lotus of wisdom there, and then left on his long journey to civilize the rest of the world.
Manetho, fourth century B.C.E. Egyptian Priest-Historian

The Mayas told of two major waves of foreign immigration that washed ashore in Mesoamerica. Separated in time by many generations, the Greater and Lesser Arrivals constituted the seminal events in their history. Both coincided with transformational happenings in the outside world and paralleled the major geologic upheavals that forced mass evacuations from Atlantis.

According to the Mayan calendar a new world age began on 4 Ahu 2 Cimhu, or August 12, 3113 B.C.E. This date conforms remarkably well to archaeological time scales for Mexico's first civilizers, the Olmecs. Originally scholars believed they appeared in 1200 B.C.E. Until additional evidence for a period 300 years earlier came to light. More recently, a date in the late fourth millennium B.C.E. has been confirmed. In the early 1980s astronaut Gordon Cooper, still employed by NASA and accompanied by a National Geographic photographer, recovered carbon-datable Olmec pottery shards from an offshore island in the Gulf of Mexico. Analysis at Texas A & M University established that the materials were 5,000 years old. The discovery prompted Dr. Pablo Bush Romero, head of Mexico City University's National Archaeology Department, to personally investigate the island. He and his colleagues confirmed the older date, which was thereafter officially indicated at the Jalapa Museum (State of Veracruz) specializing in Olmec culture. Interestingly, the two previously theorized time horizons (1500 and 1200 B.C.E.) for the abrupt beginnings of Mesoamerican civilization reflect, respectively, the second series of geologic upheavals and final destruction of Atlantis. Both cataclysms sparked different migrations that created the two later cultural levels of Olmec civilization.

The date of 3113 B.C.E. for the founding of the Mayan civilization is still more remarkable, for it is the same year in which dynastic civilization began in Egypt. These two formative events, separated by half a world but united in time, were not coincidental. Their commonality is demonstrated in a remarkable comparison of artifacts. Hierakonopolis's famous Narmer Palette, named after the first pharaoh of the First Dynasty, and an illustration of the first Aztec monarch, Moctezurna I, in Mexico's Codex Mendoza, show identical depictions of men grabbing the hair of a defeated enemy with one hand, while raising a war club in the other. In both illustrations a male figure appearing to the left of the scene in the guise of a bird, apparently emblematic of royalty, attacks another enemy. This extraordinary parallel could not possibly have been the result of chance creation. The specific, highly individualized details of both images reflect a common inspiration reproduced nowhere else in the ancient world.

Combined with the identical foundation dates for the Valley of Mexico and Nile Valley civilizations, plus the representation of both cultures' first monarchs in both artifacts, a fundamental relationship between Mesoamerica and pharaonic Egypt is beyond question. There are no Egyptian traditions suggesting direct overseas contacts in Mexico, however, much less indications of Aztec or Mayan connections with Egypt. Yet both Mesoamerica and ancient Egypt shared remarkably similar accounts of powerful culture bearers who arrived to institute civilization in their own respective lands from across the Atlantic Ocean. To the Egyptians their founding fathers came from the west; to the Mayas, they arrived from the east. Both cultures told essentially the same story because they were recipients of a common Atlantean heritage.

The imported features of dynastic Egypt are fundamentally the same details introduced into Mesoamerica. Both civilizations appeared full-blown in history, without the long-term, painstaking progression of development observed in other complex organized societies. If the Egyptians had planted their culture in Mesoamerica, the two civilizations would appear virtually identical, the one having been little more than a colonial extension of the other, but this is certainly not the case among any of the uniquely identifiable societies of Mesoamerica. For example, that both the Mayas and Egyptians, isolated from each other by a vast ocean, used hieroglyphs suggests that both peoples received them from the same source. Neither written language translates the other because both systems evolved separately over many centuries.

Differences separating Egyptian from Mesoamerican civilizations stem from the particular reaction of immigrating Atlantean culture bearers to the local environments they found in two different lands. There were enough similarities, however, to show they sprouted from the same Atlantean seed. In other words, Mesoamerica and dynastic Egypt were local inflections of the Atlantean theme common to both. The mythic and historical heritages of these societies do not speak of Egyptian but rather Atlantean origins. Indeed, civilizing influences reached Mexico at the same time they appeared in the Nile Delta. The Maya foundation date of August 12, 3113 B.C.E., must have been the day that Atlantean refugees landed at Veracruz. Sailing in their reed boats, they fled the first of the serious geologic upheavals that troubled but did not yet destroy their oceanic homeland.

The Narmer Palette/Codex Mendoza images and shared foundation date in the late fourth millennium B.C.E. are not the only similarities between the two cultures. Fundamental connections between Mexico and Egypt through Atlantis are apparent in abundant cross-cultural illustrations. For example, Mesoamerican pyramids bear strong resemblances to Sumerian ziggurats and especially early Egyptian step pyramids. The most famous step pyramid in the New World is Yucatan's Pyramid of Kukulcan, the Feathered Serpent (fig. 15.1). After dawn on the vernal equinox the lower portion of the west face of both this Mayan structure and Egypt's Great Pyramid are in shadow. As the day progresses, the west face of each become increasingly illuminated as the rays of the sun move from the north, crossing the zenith at noon. This phenomenon is unique and occurs only on the first day of spring.
Frank Joseph

“Another key piece in the mystery of Atlantis falls into place. Further essential reading for the discerning Atlantologist.”

– Andrew Collins, author of From the Ashes of Angels and Gateway to Atlantis

“With exacting scholarship that moves at the pace of a compelling detective story, Frank Joseph brilliantly provides a wealth of evidence that the survivors of Atlantis greatly influenced and shaped the history of many early civilizations.”

– Brad Steiger, author of Mysteries of Time and Space

"This is not the story of Atlantis and its downfall. It is a view of the impact of Atlantean culture and civilization on the rest of the Bronze Age world. It is an excellent addition to the library of anyone interested in the subject."

Their Impact on World Culture

By Frank Joseph
LIST PRICE £7.99
PRICE MAY VARY BY RETAILER