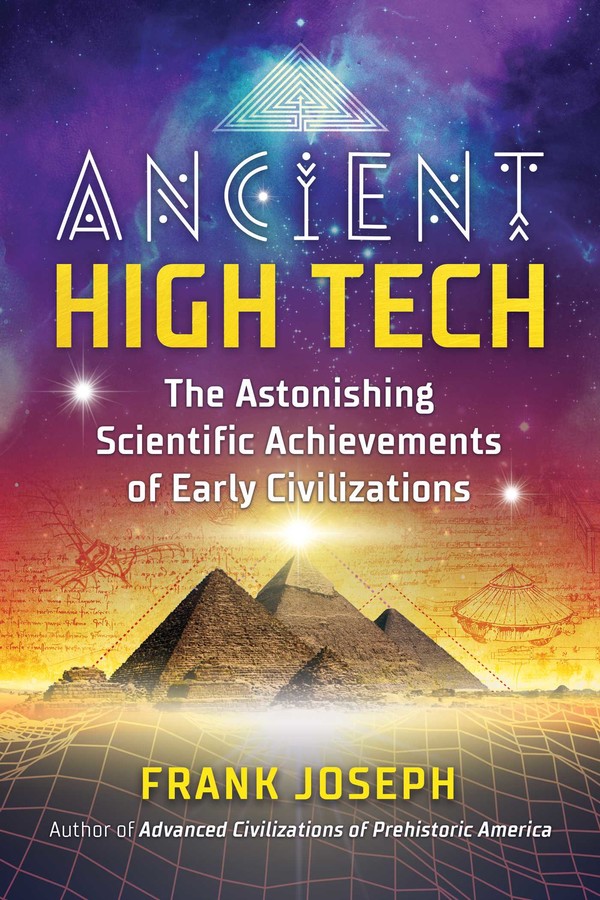 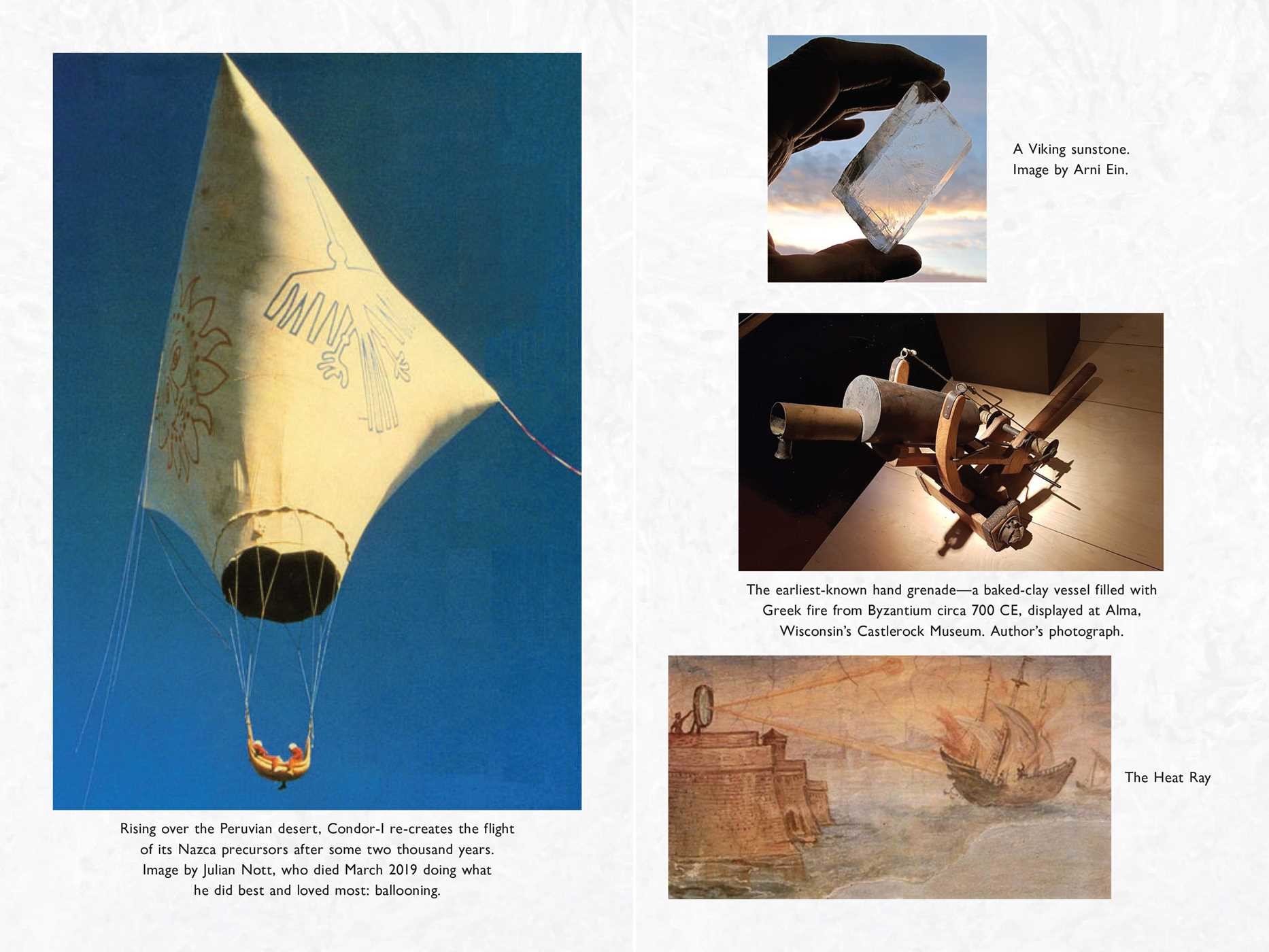 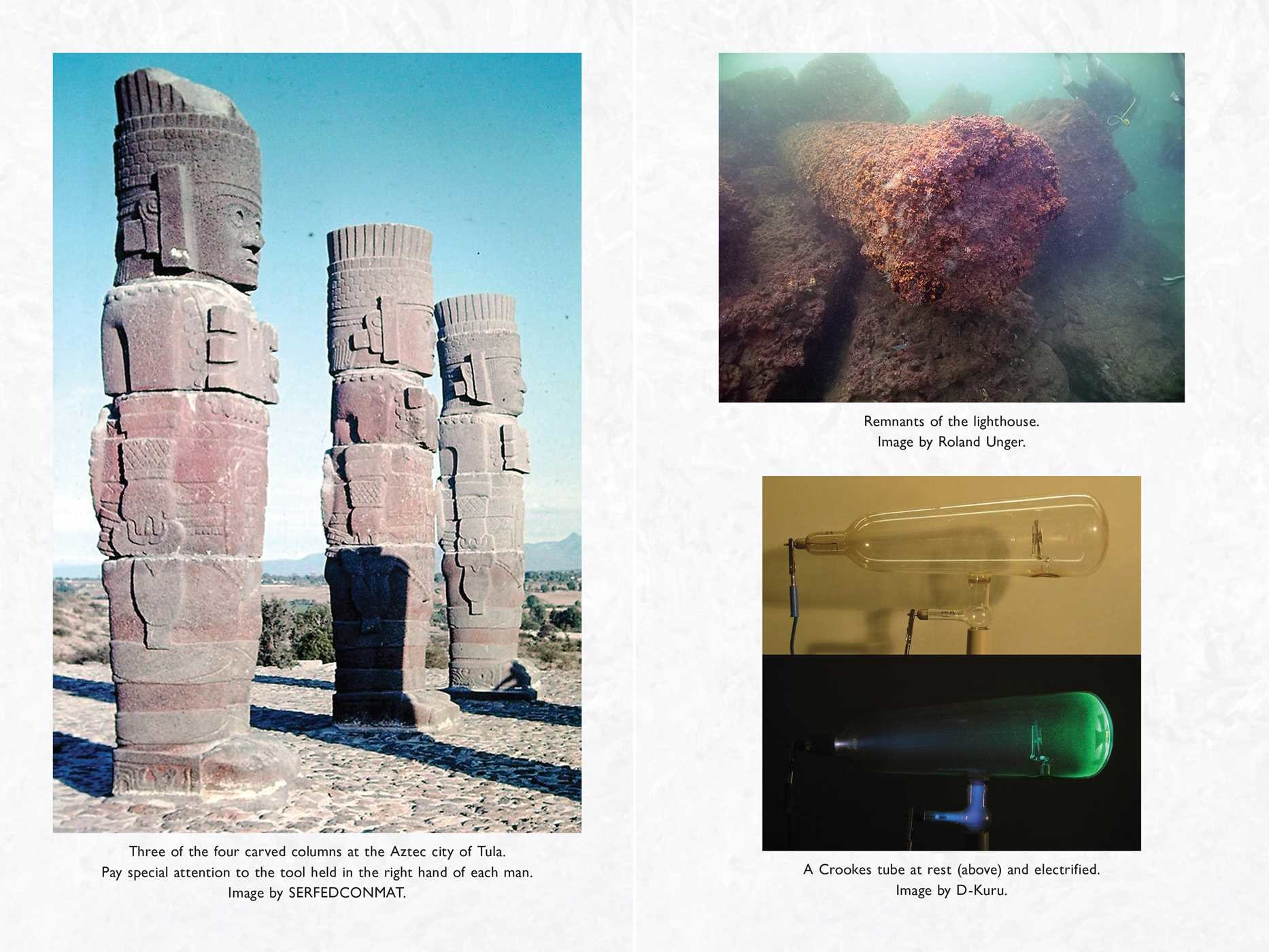 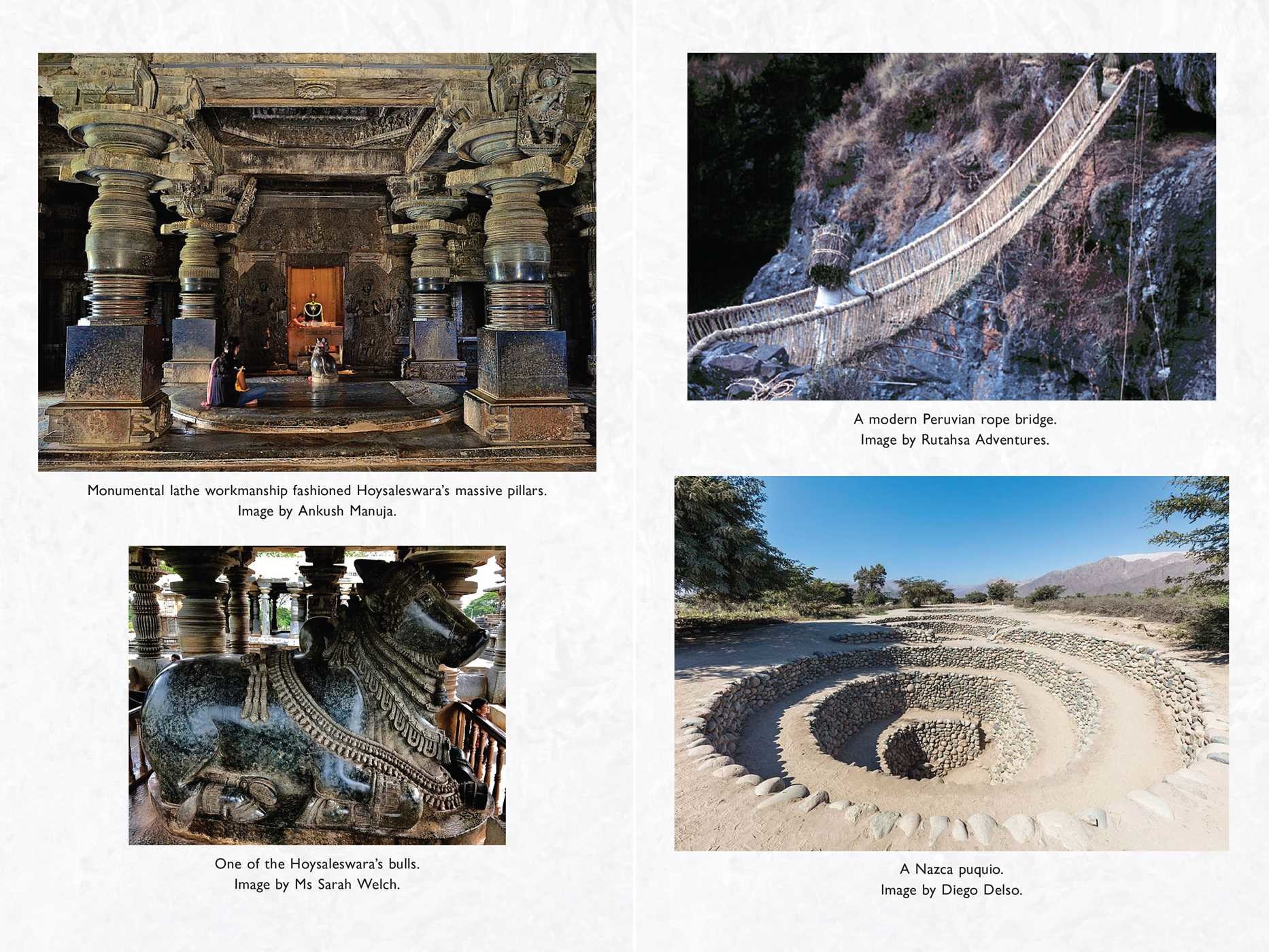 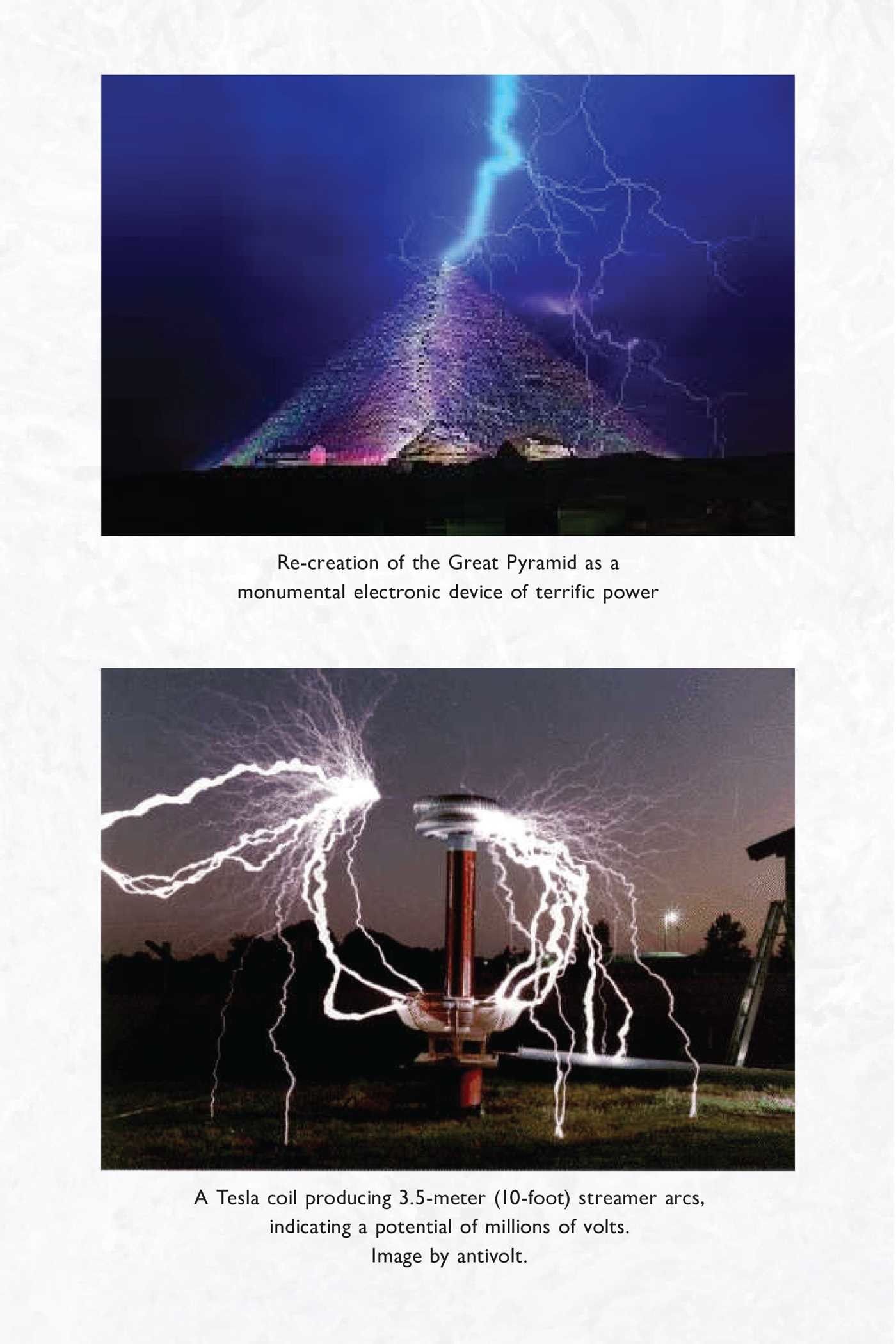 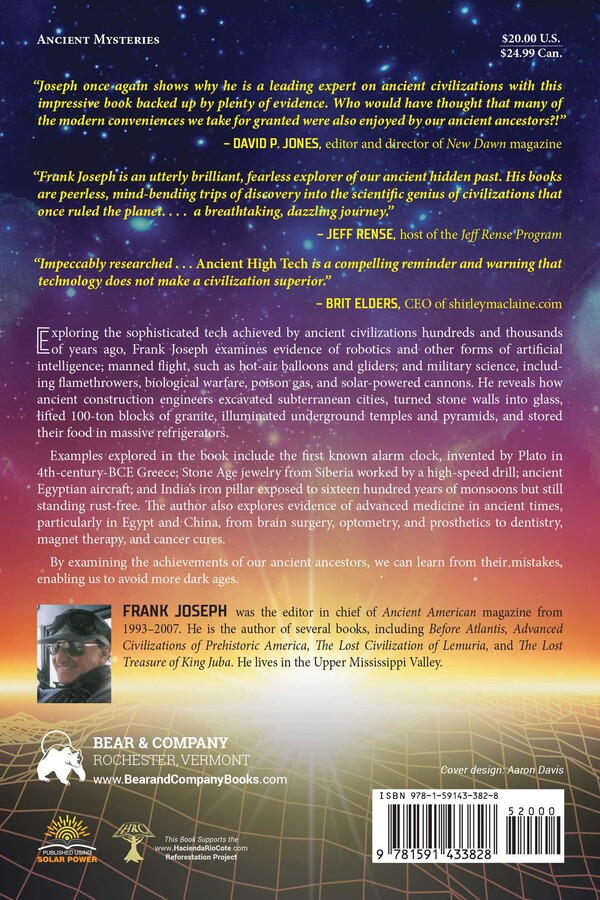 By Frank Joseph
LIST PRICE £16.99
PRICE MAY VARY BY RETAILER

A detailed look into ancient advanced technology, science, and medicine--some of which has yet to be reproduced today

The first self-igniting match was invented in 1805 by Jean Chancel, a French chemist. Yet, in Babylon, 3,600 years before, identical sulfur matches were in common use. On the Panchavarnaswamy Temple in India, built millennia ago, there is a detailed carving of a man on a bicycle, yet the bicycle wasn’t invented in the modern world until 1817. These inventions are only two examples of technology lost in the Dark Ages.

By examining the achievements of our ancient ancestors, we can not only reverse-engineer their inventions but also learn from their civilizations’ mistakes, enabling us to avoid more dark ages. Imagine how scientifically advanced humanity would be if our early achievements had escaped destruction and been allowed to develop?

21st-century homes are typically equipped with such common elements as central heating, airconditioning, plumbing, refrigerators, clocks, and telephones. However, these everyday features are relatively new additions to domestic life. Central heating, for example, was invented by 1830, but most public and private buildings went without it until after the turn of the next century.

Yet, all these and more were part of civilized life before it collapsed and everything was lost, only to be gradually, accidentally rediscovered within the last two hundred years. The first known example of central heating warmed the Greek temple of Ephesus, in what is now western Turkey, around 550 B.C., although earlier, lost versions undoubtedly existed. Later, Roman improvements provided warmth to the whole interior of a building from one area to multiple rooms through caliducts, pipes installed under the floors, while the hypocaust was a specialized system for heating walls. After the collapse of the Roman Empire, heating across Europe reverted to more primitive fireplaces for almost a thousand years.

Romans two thousand and more years ago excavated massive refrigerators for cool storage from spring to at least mid-summer. Filled with snow topped by blocks of ice during winter, then covered with straw as insulation, the deep shafts perfectly preserved cheese, fish, meat, oysters, and other perishable goods in warm months. Several of these subterranean refrigerators, some fifteen feet deep, have been identified in Switzerland at a site known as Augusta Raurica, about twelve miles from Basel. The underground shafts retained snow levels throughout June, while their ice blocks survived longer still, according to studies undertaken by archaeologists at the University of Basel.

A far older, more complex, and completely different kind of refrigerator operated from around 400 B.C. across the Persian Empire. Resembling a rounded pyramid, examples sometimes stood as high as thirty feet over the deserts of what is today Iran and parts of Afghanistan. Still known as a yakhchal, or “ice pit,” it covered a square-shaped basement entirely coated with sarooj, a mortar of mixed clay, sand, ash, goat hair, and lime that effectively waterproofed walls and floor. The spiraling, dome-shaped tower was designed as an insulator to keep heat out, while preserving lower interior temperatures generated by ice blocks brought from nearby mountains. So successful were these ancient “ice pits” that--incredibly--several original specimens still operate today in remote areas of the Middle East, where electricity is scarce. By comparison, how much of our 21st century technology will be functioning 2,400 years into the future?

In Europe, 4,000 years ago, private toilets with a central system of stone drains and ceramic pipes were common in the city of Knossos, Crete. One thousand years before, residents of the Indus Valley high culture in Pakistan and India utilized similar receptacles. “The cities of Harappa and Mohenjo-Daro,” according to hydrologists J.C. Rodda and Lucio Ubertini, “had a flush toilet in almost every house attached to a sophisticated sewage system.” The flush toilet and good hygiene it helped establish for more than three millennia were forgotten following the fall of the Greco-Roman World. Childress writes that “more than five thousand years ago, in the Tigris Valley, near Baghdad, Tell Asmar had homes and temple with elaborate arrangements for sanitation. One excavated temple had six toilets and five bathrooms.” Most of this plumbing equipment was, according to a July 1935 issue of Scientific American magazine, “connected to drains which discharged into a main sewer, one meter high and fifty meters long . . . In tracing one drain, the investigators came upon a line of earthenware pipes. One end of each section was about eight inches in diameter, while the other end was reduced to seven inches, so that the pipes could be coupled into each other just as is done with drain pipes in the 20th century.”

In the late 1800s, Alexander Graham Bell supposedly placed history’s first telephone call, even though he was actually preceded by more than a thousand years by an extinct people known as the Chimu. Around 850 A.D., they founded the largest metropolis in pre-Columbian South America. At 7.7 square miles, with a population of one hundred thousand residents, it flourished another five hundred years, before Chan Chan was conquered by Inca imperialists.

While excavating the city’s ruins in 1937, German archaeologist Wolfram von Schoeler discovered a pair of identically carved gourd tops, each 3.5 inches long, coated with resin. Their bases, covered with stretched hide, were connected by a long line of cotton twine. After returning to Germany, von Schoeler’s curious discovery found its way into Washington, D.C.’s National Museum of the American Indian, where curator Ramiro Matos identified it as a proto-telephone, fundamentally similar to the string-attached tin cans children play with, although far more effective at seven hundred fifty feet. Today, the ancient Peruvian device is preserved in a temperature-controlled environment as the first specimen of its kind.

A Greek inventor residing in Alexandria, Heron, fabricated a holy water dispenser around 120 B.C. A coin was dropped into a sealed vessel, which made a small plunger pull up, allowing a measured quantity of fluid to be dispensed. Heron’s device was an improvement on earlier vending machines installed in Egyptian shrines and at the Temple of Zeus, in Athens, because the quantity of water dispensed was directly proportional to the weight of the coin dropped into the slot.

Another highly advanced instrument developed in antiquity was the seismometer for measuring ground motion caused by earthquake or volcanic eruption. The first such device was believed to have been invented by Fr. Jean de Hautefeuille, a French physicist, in 1703. Not until the mid-20th century, however, did Sinologists discover that his apparatus was preceded in China by 1,571 years. Their translation of the 5th century C.E. Hou Hanshu, or “Book of the Later Han,” revealed that Zhang Heng, an accomplished polymath, built a “instrument for measuring the movements of the Earth,” in 132 A.D.
Frank Joseph

“Based on extensive research including the latest findings, Frank Joseph delivers in this book a comprehensive overview of our ancient ancestors’ remarkable achievements, much of them lost to the sands of time. Frank Joseph once again shows why he is a leading expert on ancient civilizations with this impressive book backed up by plenty of evidence. Who would have thought that many of the modern conveniences we take for granted were also enjoyed by our ancient ancestors?!”

“Frank Joseph is an utterly brilliant, fearless explorer of our ancient hidden past. His books are peerless, mind-bending trips of discovery into the scientific genius of civilizations that once ruled the planet. His dedication to revealing our true history--kept hidden from us by orthodox, grant-fueled ‘science’ and those who control our world--is unfailingly inspiring. In this, his newest work, he once again guides us on a breathtaking, dazzling journey into the reality of the advanced science and incredible technologies our forebears discovered and used to make their civilizations thrive.”

“Impeccably researched, Ancient High Tech transports the reader back through history to the remarkable technological achievements of various ancient civilizations around the globe. From the earliest attempts at aviation to refined structural engineering to sophisticated healing therapies, Frank Joseph’s comprehensive investigation illustrates that early cultures were much more advanced than generally believed. Each of the progressive societies mastered various forms of technologies and each suffered a similar fate: they collapsed. Perhaps Ancient High Tech is a compelling reminder and warning that technology does not make a civilization superior.”

“Frank Joseph’s new book on the amazing technology and early breakthroughs of ancient civilizations is a wonder to behold. It includes mind-blowing tangible proof in pictures of physical artifacts that depict everything from ancient heat rays to Byzantium-era hand grenades and early creations for human flight. When the world entered the dark ages of collapsing civilization in both the West and the East, so much of the scientific, technological, and early medical knowledge of the ancients was lost. Frank helps locate the missing pieces for us. Explore this amazing book and its fascinating author at your earliest convenience.”

"Frank Joseph is an author of incredible talent and research ability. He is able to find information about topics that no one else can. His writing style is so engrossing, entertaining, and just enjoyable--an excellent way to present research to the general public. I strongly recommend Ancient High Tech and any of his other books. Frank Joseph is one of my favorite authors, and I always look forward to a new book of his."

– John DeSalvo, Ph.D., director of the Great Pyramid of Giza Research Association and author of The Lo

“With Ancient High Tech, Frank Joseph has once again created an exceptionally interesting and informative story of our highly advanced ancient ancestors. This book adds significantly to the evidence for advanced sophistication of our ancient ancestors. A master of in-depth research and fact gathering, he’s helping us see our ancient past in a new light one book at a time.”

– Andrée L. Cuenod, author of Awakening: A Journey of Enlightenment

“Frank Joseph can be controversial, but he is never anything less than thought-provoking. Written with a discerning eye and a global perspective, when he delves into a topic--be it an Aztec death whistle or the electromagnetic properties of Egyptian pyramids--you are guaranteed a fascinating journey into the past.”

– David Goudsward, author of The Westford Knight and Henry Sinclair

By Frank Joseph
LIST PRICE £16.99
PRICE MAY VARY BY RETAILER