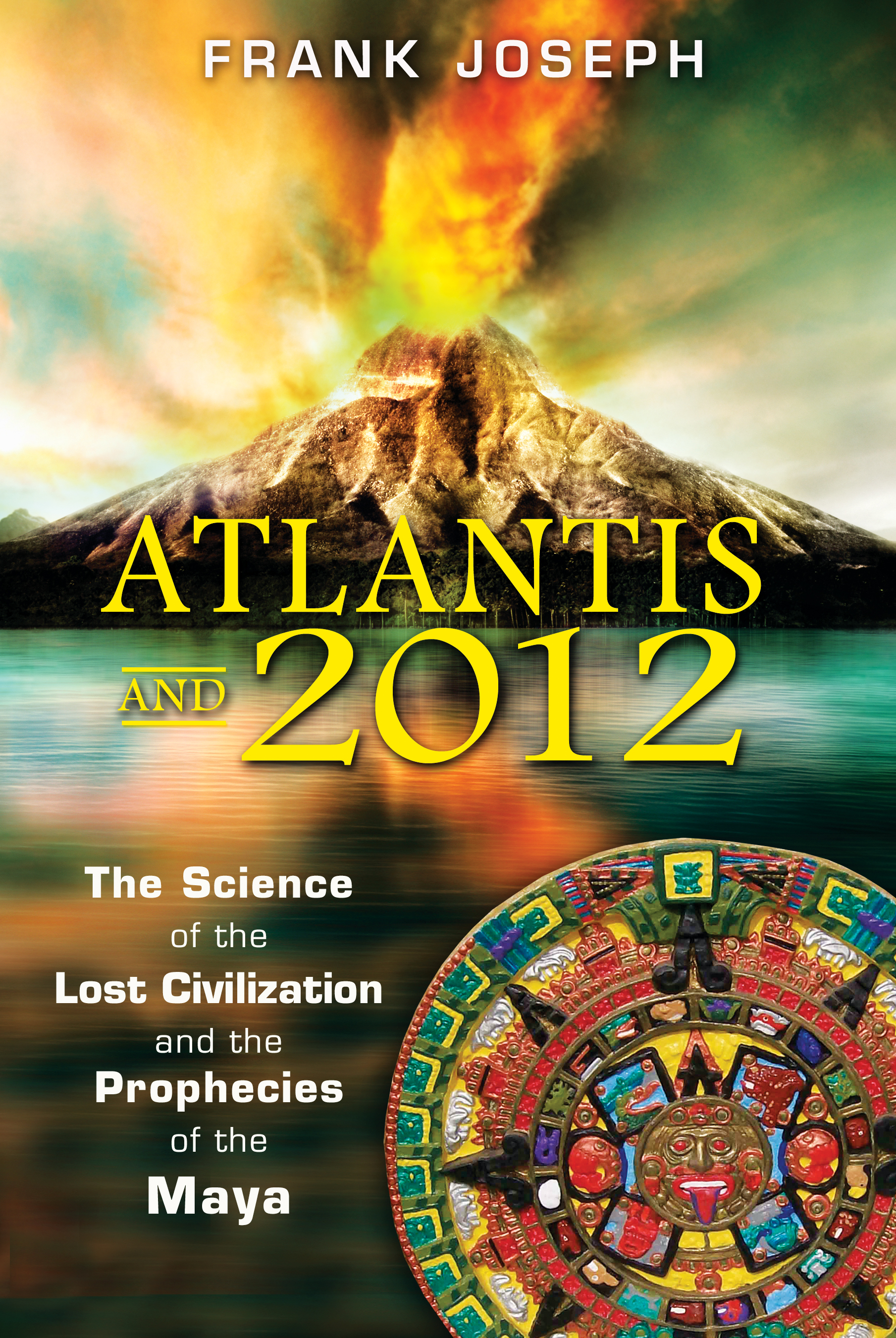 By Frank Joseph
LIST PRICE £13.99
PRICE MAY VARY BY RETAILER

Based on more than 25 years of research around the globe and statements from Edgar Cayce about Atlantis and its Pacific sister civilization of Lemuria, Frank Joseph reveals that the Mayan Calendar was brought to Mexico by survivors of Atlantis. Uncovering the Atlantean influences in both ancient Mesoamerican culture and ancient Egyptian culture, he links the demise of Atlantis with the birth of the Olmec civilization in Mexico (the progenitors of the Maya), the beginning of the first Egyptian dynasty, and the start of the Mayan Calendar. Joseph explains that the Mayan Calendar was invented by the combined genius of Atlantis and Lemuria and describes how it predicts an eternal cycle of global creation, destruction, and renewal. Correlating this recurring cycle with scientific studies on glacial ice cores and predictions from the Hopi, the Incas, and the Scandinavian Norse, Joseph reveals that 2012 could be the start of a new ice age and the advent of a massive solar storm. However, Joseph shows that the Maya knew the way to reestablish civilization&#8217;s cosmic balance before time runs out.

The form that Atlantean astrology or its predictive procedures took may, in fact, have best survived in the Maya calendar or, more properly, Mesoamerican calendrics, of which the Maya were a part.

At the zenith of its power, Atlantis was the capital of an imperial enterprise that extended from “the opposite continent,” as Plato referenced America, to Western Europe as far as Italy and North Africa on the Egyptian border.  As Plato cited, Azaes, one of Kleito’s sons, ruled a province of the Atlantean empire.  Azaes’s name bears a striking resemblance to the Itzás, a Maya people who occupied coastal Yucatán, where they are most famously remembered for their impressive ceremonial city, Chichén Itzá.  Its centerpiece is the pyramidal Temple of Kukulcán, the Feathered Serpent.

While the term serpent was often used as a title signifying “power,” the Mayas were unable to grow facial hair, and therefore possessed no word to describe Kukulcán’s bearded appearance.  They had to rely on their next closest adjective--feathered--to characterize the bearded founding father of Mesoamerican civilization.  Had they not seen this foreigner from the ancient Old World with their own eyes, they would never have been able to dream up such a figure.

Kukulcán’s conception as a bearded white man is by no means confined to pre-Columbian oral traditions.  The walls inside a small, masonry structure at the north end of Chichén Itzá’s Great Ball Court are covered with bas relief carvings clustered around the representation of Kukulcán as a male figure with a Semitic nose and long, full beard.  This structure itself is known as the Temple of the Bearded Man.

The Itzás were a Maya people named after a variant of the Feathered Serpent, Itzamna.  In a Maya cosmology known as the Chilam Balam and Juan Darreygosa’s sixteenth-century Historia de Zodzil, Itzamna bears the title Serpent from the East and is described as “the first after the flood” that engulfed his island kingdom in the Atlantic Ocean.

He arrived first on the island of Cozumel, off the Yucatán coast, where some temples dedicated to him still stand.  Proceeding to the Mexican mainland, he built Chichén Itzá, or Mouth of the Well of Itzá, and one hundred forty-nine other cities.  In temple art such as friezes at the Maya ceremonial center of Tikal, in Guatemala, he is portrayed as a long-nosed, bearded man rowing his boat across the sea from which he came.  In the background of this sculpted frieze running around the top exterior of the acropolis is a volcanic island in the process of a major eruption while a stone city topples into the sea and a blond-haired man drowns in the foreground.

The identity of this scene could hardly be more self-evident.  When Teobert Maler, the Austrian archaeological photographer who found the frieze, saw it for the first time in 1915, he exclaimed, “Until that moment, I dismissed Atlantis as a baseless myth. I knew at once that I had been mistaken.”

Itzamna’s followers from the Red and Black Land of Tutulxiu, the Land of Abundance or the Bountiful, far across the sea, “where the sun rises,” were the Ah-Auab: “foreigners to the land,” “white men,” or the True Men.  On the twenty-seventh stele at Yaxchilan, the eleventh stele at Piedras Negras, and on the Temple of Warriors at Chichén Itzá, they are portrayed as bearded, with long, thin noses and European facial features.

The Chilam Balam tells of life in the Red and Black Land as ideal for many centuries.  One day, however, “a fiery rain fell, ashes fell, rocks and trees crashed to the ground.  Then the waters rose in a terrible flood.  The sky fell in, and the dry land sank into the sea”--doubtless the same event depicted on the acropolis at Tikal.

The Red and Black Land was also known as Tayasal and described in the Popol Vuh as “the lost homeland of the Ah-Auab, who came from the other part of ocean, from where the sun rises, a place called Patulan-Pa-Civan.”  These oceanic origins were naturally embedded in the very name of the people that built Chichén Itzá.  It stems from the Mayan itz, for “magic,” and (h)á, meaning “water,” to form “magicians of (or from) the water (i.e., sea).”

Given their city’s abundant Atlantean pedigree, evidence for the sacred numerals in its ceremonial architecture might be expected, such as the Temple of Kukulcán’s ten levels.  Buried in the heart of the step pyramid, directly beneath the summit’s Bacabs positioned at the Cardinal Directions on the four walls of its shrine, reposes a blueeyed statue, known as a chac-mool, to create the sacred center and fifth numeral.

A few paces to the northwest, a sculpted panel in the Great Ball Court depicts a decapitated victim from whom six streams of blood transform into serpents.  Feathered serpents from Atlantis carried the technology and spirituality of their overseas homeland to establish a colony in Middle America at Yucatán--Plato’s Azaes--from which their descendants, the Itzás, derived their name and identity.  As such, they were culture bearers who sparked Mesoamerican civilization, a synthesis of introduced Atlantean know-how and indigenous influences.

Among the most important gifts carried away from the island kingdom of Atlas was a scientific reckoning of time.  Its original configuration was gradually eroded and eventually lost through the influence of successive, native inflections from the late fourth millennium B.C. Olmec and third century B.C. Maya, over the millennia to its last custodians, the Aztecs, in the early sixteenth century A.D.  Yet its core mechanism remained intact as developing cultural variations replaced one another.  The better known of these are the Maya calendar and the so-called Aztec Calendar Stone.
Frank Joseph

“Once again Frank Joseph has shown that when it comes to Atlantis and related subjects, no one else knows as much. In this case he has taken on two very difficult subjects but has succeeded in extracting some of the most fascinating history anyone has seen in a long time.”

“I have reviewed dozens of books on the year 2012 and its meaning and consequences, but Frank Joseph’s Atlantis and 2012 presents us with many facts and research ignored by most of the other guides. I have especially high regard for Frank Joseph’s courage to question what the majority of academia, government, and media around the world have concluded about global warming. They have ignored the research showing global warming is actually the precursor to a new ice age. In addition to all the other fascinating bits to be found in Atlantis and 2012, I find the most important is Joseph’s emphasis on the reminder that global warming may just be the trigger for an oncoming ice age, which we now know can manifest in as little as 20 years!

“The Mayan civilization gave a gift to future humanity in the form of their Mayan calendar. Having witnessed periodic extinctions, they documented these cycles in the hopes of preparing and maybe even preventing what they could not: a dark end for our age. Their message is one of balancing the material and spiritual dimensions, because an imbalance brings on social decay and physical annihilation. Vested interests and the domination of the corporate world, which enforces its status quo, have brought us to the edge of extinction. Although humankind may be vastly diminished, the planet will survive.

“The Atlanteans were much like us--in fact, they are us if you consider reincarnation. Their insatiable appetite for material prosperity and military might mirror the world governments of today. Frank Joseph has used the works of two great seers, Plato and Edgar Cayce, to guide us through our past and future. Thanks to the Atlantis code (which we know as the Mayan calendar), he shows that we still have hope that we might be able to avoid what the Atlanteans failed to avoid. You must read this book--today!”

"Mr. Joseph has assembled an impressive array of details, some of which have been drawn from almost forgotten sources. . . . [He] is, without doubt, one of the foremost writers on lost civilizations, and makes it easy to follow and understand his reasoning. Whether or not you believe in these continents; whether or not you believe we are living in 'end times'; you can find something of interest within these covers. Pick up a copy."

"Joseph points to global cataclysms that affected our planet in c.3100 BC, 2200BC, 1600 BC, and 1200 BC. The next cataclysm could coincide with a solar superstorm and a reversal of the Earth's magnetic field, bringing on a new ice age. He cautions that our civilization could well be equally as fragile as those that rose and fell before it under the influence of massive cosmic and terrestrial forces."

"Much has been written over the years about the so-called "Legend of Atlantis." More recently, a number of books have appeared anticipating what will happen to the earth in December 2012. . . for the first time we have in this new book by Frank Joseph the most well researched link between these two subjects."

“Frank Joseph’s Atlantis and 2012 presents thoughtful insights to readers . . . this work provides much food for thought for readers concerned about 2012.”

By Frank Joseph
LIST PRICE £13.99
PRICE MAY VARY BY RETAILER