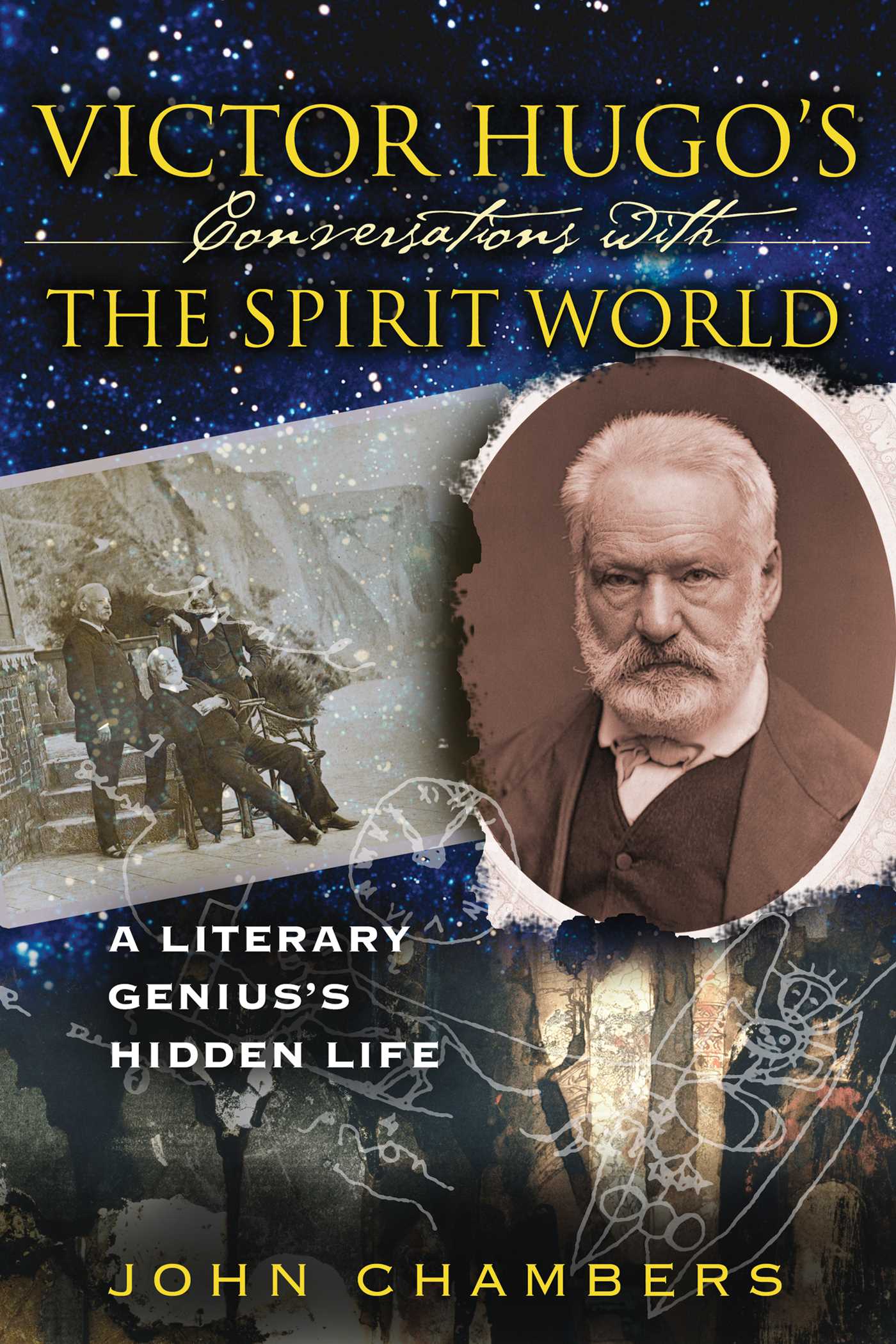 By John Chambers
LIST PRICE £8.99
PRICE MAY VARY BY RETAILER

During Victor Hugo’s exile on the Isle of Jersey, where he and his family and friends escaped the reign of Napoléon III, he conducted “table-tapping” séances, transcribing hundreds of channeled conversations with entities from the beyond. Among his discarnate visitors were Shakespeare, Plato, Hannibal, Rousseau, Galileo, Sir Walter Scott, and Jesus. According to the transcripts, Jesus, during his three visits, condemns Druidism, faults Christianity, and suggests a new religion with Hugo as its prophet.

To the skeptic, some of the “conversations” may seem self-serving--at best, the subconscious wishes of the naïve participants. But author John Chambers places Hugo’s experiments firmly in the tradition of visionary literature and psychic exploration, aligning those experiences with the poetry of William Blake, the table-tapping experiences of the Fox sisters, and the channeled writings of the great modern-day Pulitzer Prize-winning poet James Merrill, whose spirits’ utterances uncannily resemble those of Hugo’s. Hugo’s transcriptions are the missing link between the early nineteenth century’s fascination with the kabbalistic Zohar, reincarnation, and the writings of the Illuminati and the rise of spiritualism and the societies for the study of psychic phenomena in the latter nineteenth and early twentieth centuries.

Although Victor Hugo had followed the progress of spiritism in France, he was not interested in talking to the dead, nor did he believe it was possible. All this would change, however--and literally overnight--in the course of Delphine de Girardin’s brief stay on Jersey Island. That stay began with the question, directed eagerly by her at the Hugos on the day of her arrival, “Do you do the tables?”

Hugo chronicler Maurice Levaillant writes that, in response, “Victor Hugo expressed his skepticism, and Madame Hugo her still unsatisfied curiosity.” “How should the tables be done?” Hugo asked Delphine. She explained that the medium or mediums--whoever’s fluid was potent enough to channel the spirits’ words--laid their hands on the table. Then, when the table was ready, it raised one leg, then another, tapping out a message perhaps on the floor, perhaps on another table. Sometimes the table leg, though it moved, did not rap. Other times, the leg didn’t move--or there was no table at all--but there were rapping sounds. The process was lengthy; the table leg, though it could signify “yes” with one tap and “no” with two, had to rap out a number of taps corresponding to the position of the letter in the alphabet, one tap signifying “a,” 26 taps signifying “z,” and so on. The tables were coy, unpredictable, contrary, and capricious; sometimes a leg remained poised in midair for minutes without tapping, other times the table floated up from the floor, sometimes to the ceiling; often the table shook, sometimes violently; sometimes it slid across the floor from one end of the room to the other while turning around in circles.

The Hugos listened warily to Delphine. They told her there was a table at Marine-Terrace that, a few weeks earlier, they’d unsuccessfully tried to animate in the spiritistic mode. Perhaps the table hadn’t been appropriate--?

Jean de Mutigny, in Victor Hugo, Spiritist, takes up the story from here. “Not even waiting for dessert, Delphine de Girardin asked to see the table

. . . . It was a big, square, four-legged table. Delphine burst out laughing: ‘It’s not surprising the spirits haven’t manifested! You need a round little table. Otherwise, the phenomena can’t possibly appear.’ There was no round little table at Marine-Terrace. Delphine immediately decided to go off to Saint-Hélier and buy one.”

In a toy shop she found a small round pedestal table with its one leg ending in three gold claws. She brought it back to the house under her arm. She and the Hugos placed the pedestal table on top of the large square table. That evening, they tried again and again to make the pedestal table “turn.” It was no use. They tried again the next day, still without success. Auguste Vacquerie, General Adolphe le Flô and his wife, and Count Sandor Teleki and his wife all took turns around the tables. For four days, under the impatient direction of Delphine, everyone labored to make a piece of furniture talk.

Victor Hugo didn’t seem to take much of an interest. He didn’t sit at the table. He didn’t sit near it. Sometimes he read on a couch at the far end of the room.

But, on the afternoon of Sunday, September 11, 1853, something extraordinary happened.

That afternoon Victor Hugo took part in the séance for the first time. Auguste and Delphine sat at the pedestal table with their hands resting on the top. Present as well were Madame Hugo, Charles and Victor-François Hugo, General le Flô, and the proscript Pierre de Treveneuc. Slowly and falteringly, the table began to rap out words. The participants were delighted! They seemed finally to have succeeded in calling up the spirit world. At the start the messages were brief, fragmentary--almost incoherent. The attendees treated this unfolding séance like a parlor game: They asked the table to guess what they were thinking

Auguste Vacquerie was just asking his question when suddenly the table slowly tapped out the word, Suffering.

“That wasn’t the word I was thinking of,” said Auguste. He’d been thinking of the word “love.”

The table was becoming staccato in its movements, abrupt and willful--as if it were about to issue a command.

“Are you still the same spirit who was just here?” asked Delphine.

The table rapped twice: No.

“Who are you?” asked Delphine.

The table tapped out:

Everyone thought at once of the drowned Léopoldine.

“Who are you?” Delphine asked again.

Surely this could mean only one person: the sister of the two brothers who were present! Surely it must mean Léopoldine. The participants were overcome with emotion. Madame Hugo broke down in tears. Victor fought to remain composed. He took charge:

“Sweet soul, are you happy?”

“What must we do to go where you are?”

“Who sent you?” asked Delphine.

“Do you have a message for us?” Victor asked.

Suffer for the other world.

“Do you see the suffering of those who love you?”

“Will their suffering go on for some time?” Delphine asked.

“Are you happy when I mingle my prayers with your name?” Victor asked.

“Are you always near those who love you? Do you watch over them?”

“Does it depend on them whether you return (to the tables)?”

“But you will return?”

Then the table was silent. The spirit was gone. The séance had ended.

Victor Hugo was hooked. He would be involved with the spirit world for the next two years. He would talk to over one hundred spirits. The séances would inspire his greatest poetry, a vast epic cycle about the nature of God. They would constitute the greatest adventure into the paranormal that the world has ever known.
John Chambers

John Chambers (1939-2017) had a Master of Arts in English degree from the University of Toronto and spent three years at the University of Paris. He was the author of Victor Hugo’s Conversations with the Spirit World, The Secret Life of Genius, and The Metaphysical World of Isaac Newton. He published numerous articles on subjects ranging from ocean shipping to mall sprawl to alien abduction and contributed essays to Forbidden Religion: Suppressed Heresies of the West.

“Truly great and deserves to be in every library, both public and private.”

– Hans Holzer, Ph.D., parapsychologist and author of Ghosts: True Encounters with the World Beyond and

“Remember that it was after these experiences that Hugo wrote his remarkable Les Misérables.”

" . . . for those individuals who have an interest in either the works of Hugo, or the Spiritualism movement, this will become a valued addition to their library. It is eminently readable and very informative."

"New Age collections will find it an intriguing addition."

"This intriguing corner of the great novelist's life is exceptionally well documented . . . a superb contribution to literary history and to the study of the paranormal. I recommend it highly."

"The late Martin Ebon contributes a fascinating introduction that gives a brisk overview of Hugo's life, and he also discusses the Vietnamese religion of Cao Dai, which holds Hugo to be a major saint."

"So what was Victor Hugo, then: ascended master or madman? If it's a sign of their ultimate sanity that visionaries faithfully, coherently, and effectively practice what they preach, without harming others, and indeed often helping others, then Victor Hugo was a sane man."

“This is a very well presented biography, focusing on the three years that Hugo spent conversing with the spirit world. There are transcripts included that make this book extremely interesting, and whatever conclusions you draw from the material presented, I assure you that you will be entertained, amused and will find yourself pondering the conversations included in this book. It is a fascinating volume of work, and one which, if you are interested in either the life of Victor Hugo or in the various forms of Spirit Contact that are documented, you will find this an important addition to your library.”

By John Chambers
LIST PRICE £8.99
PRICE MAY VARY BY RETAILER