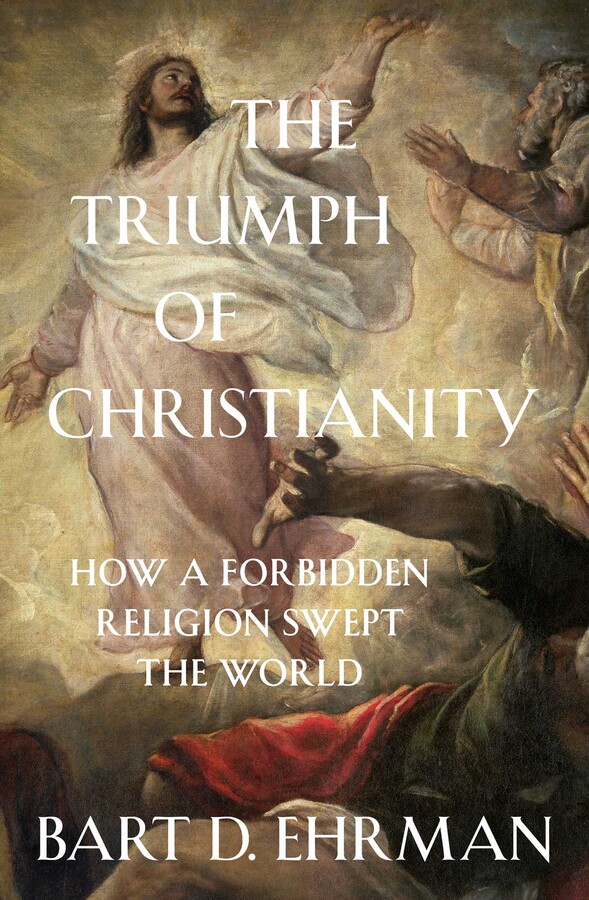 The Triumph of Christianity

How a Forbidden Religion Swept the World

How did Christianity become the dominant religion in the West?

In the early first century, a small group of peasants from the backwaters of the Roman Empire proclaimed that an executed enemy of the state was God’s messiah. Less than four hundred years later it had become the official religion of Rome with some thirty million followers.

It could so easily have been a forgotten sect of Judaism.

Through meticulous research, Bart Ehrman, an expert on Christian history, texts and traditions, explores the way we think about one of the most important cultural transformations the world has ever seen, one that has shaped the art, music, literature, philosophy, ethics and economics of modern Western civilisation.

‘This is the work of a great scholar…a book full of learning and nuance.’

‘Reading about how an entire culture’s precepts and traditions can be overthrown without anyone being able to stop it may not be heartening at this particular historical moment. All the more reason to spend time in the company of such a humane, thoughtful and intelligent historian.’

‘How did a small, provincial Jewish sect called Christianity convert the mighty pagan Roman Empire? Bart Ehrman answers this baffling question with the same wit, passion, and rigorous scholarship that have made him one of the most popular religion writers in the world today. The Triumph of Christianity is a marvellous book.’

‘Bart Ehrman is the leading expert on early Christian texts and here he takes the story on into the fourth century in a vivid and readable narrative that explores why Christianity “triumphed” as a world religion. The work is particularly valuable for its critical survey of the work of other scholars in the field.’

– Charles Freeman, author of A New History of Early Christianity

‘A lucid and convincing account of the growth of Christianity in the Roman world…[Ehrman’s] careful synthesis of existing scholarship creates an approachable study of the early church… Well worth reading.’

‘One of Christian history’s greatest puzzles after the age of the apostles is how a tiny band of mostly-illiterate outsiders converted the proud and massive Roman Empire in just three centuries – a historical blink of an eye. In The Triumph of Christianity, Ehrman brings impressive research, intellectual rigor, and an instinct for storytelling to this extraordinary dynamic.’

– David Van Biema, former religion writer at Time and author of the forthcoming Speaking to God

‘The value of Ehrman’s book, as is so often the case with his writings, is in his ability to synthesize complex material and distill it into highly readable prose.’

‘An accessible and intriguing…history of the growth of Christianity.’

The Triumph of Christianity

How a Forbidden Religion Swept the World