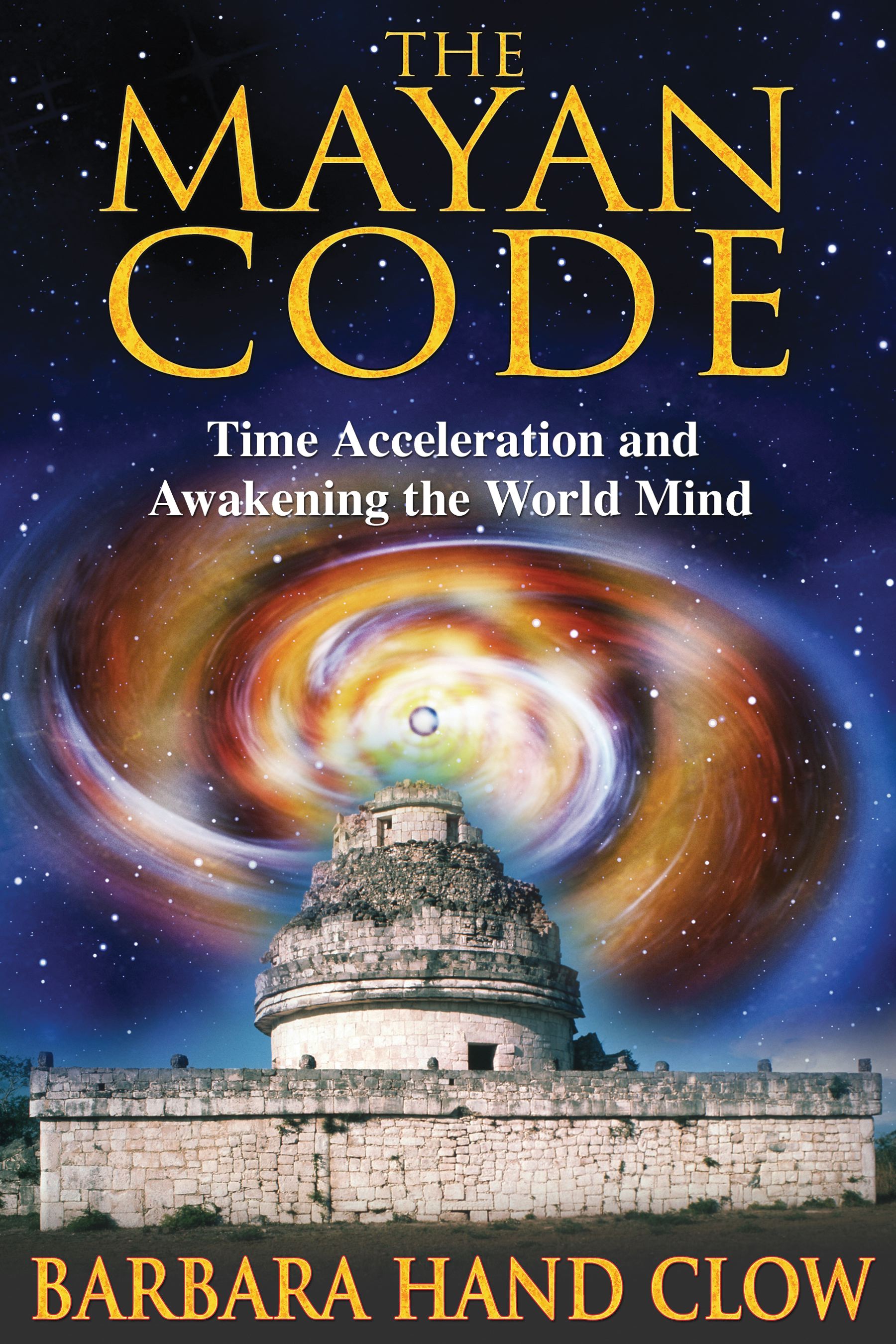 The Mayan Codeis a deep exploration of how, with the end of the Mayan Calendar, time and consciousness are accelerating, giving us a new understanding of the universe. Using Carl Johan Calleman&#8217;s research, as well as the ideas of other Mayan Calendar scholars, Barbara Hand Clow examines 16.4 billion years of evolution to decode the creative patterns of Earth--the World Mind. These great patterns culminate in 2011, and then during 2012 and beyond major astrological influences will inspire us to attain oneness and enlightenment. The Mayan Codeshows how the time cycles of the Calendar match important periods in the evolutionary data banks of Earth and the Milky Way Galaxy. These stages of evolution converged during the final stage of the Calendar, the period between 1999 and 2011. War and territoriality, resource management and separation from nature, are all part of daily events we must process during the coming transition years: evidence of the tightening spiral of time that we experience as time speeding up. Barbara Hand Clow counsels that our own personal healing is the most important factor as we prepare to make this critical leap in human evolution--now referred to as the awakening of the World Mind.

Physicists, astronomers, and astrophysicists have been successfully mapping the universe since the 1950s. Much of the public knows that our Sun revolves around the center of the Milky Way Galaxy in a 225-million-year orbit, and that it is approximately thirty light-years out from the center. Our galaxy is part of a cluster of galaxies called the Virga Supercluster, and there are many more superclusters in the universe.

Mysteriously, cosmologists discovered in 1998 that the expansion of the universe was suddenly speeding up! This shift may ultimately provide the proof for superstring theory (the idea that the universe is made of vibrating strings functioning in ten dimensions) because it suggests that quintessence--a strange energy that can exert an antigravity force-- somehow “switched” in 1998. That is, cosmologists considered the possibility that quintessence started accelerating the cosmic expansion in 1998! This has to be an effect from another dimension, which in my model would be the ninth dimension, the dimension of the Mayan Calendar.

Cosmologists have penetrated the real nature of our galaxy and our place in it just in time, because reattaining galactic consciousness is the agenda of the Galactic Underworld. It looks as if some fundamental cosmological forces changed in 1998, which helps me understand how the acceleration times twenty that began January 5, 1999, was even possible. And what changes will there be in the universe when the Universal Underworld acceleration kicks in 2011?

It is highly probable that the Maya and other highly developed ancient civilizations may have known more about the galaxy than we do right now. Regarding evolutionary acceleration times twenty, now it is time to comprehend the time distortions of the Galactic Underworld stacked on top of the Planetary Underworld (A.D. 1755-2011), stacked on top of the National Underworld (3115 B.C.-A.D. 2011), and so on.

This approach will not hold up during the Galactic Underworld because both the material and spiritual approaches to science are needed now. The Galactic Underworld is a dualized phase that favors rightbrain access, which is very spiritual. This is why an interest in spiritual science is increasing in our culture. An example of this is the wild popularity of Dr. Masaru Emoto’s The Hidden Messages in Water.

I find it fascinating that the Coba stele was deciphered in the 1950s, when the scientific evolutionary timeline was also assembled. The flowering phase of the Planetary Underworld in Day Six just happens to have been from A.D. 1952 to 1972: the 1950s again! We can understand more about the convergence of so many scientific theories at this time by having a closer look at the Planetary Underworld, which will help us comprehend the nature of the speedup times twenty within the National Underworld.

Carl Johan Calleman notes that the best way to see the influence of the speedup of the Planetary Underworld by twenty times in 1755--right in the middle of Day Seven of the National Underworld--is to follow the development of telecommunications.

The telegraph appeared in 1753, and by the time we evolved to 1952 at the opening of Day Six, we had the first public television broadcasts. I will never forget that moment. We had a grand piano in our living room. I had begun lessons when I was four or five years old, and by the time I was nine in 1952, I was studying with a great teacher. But never mind all that, when television came on the scene, out went our piano and in came the TV!

Is there anything that has changed our basic way of life more than television? And think about how computers have changed our lives. As Calleman notes, the Planetary Underworld was when industrialization was seeded, and communication by written message during the National Underworld was just not fast enough anymore.

Because of the speedup, there was a push to develop technology, and a common communications network was needed. This push that began with the telegraph has evolved all the way to the development of the Internet; it drives this new level of human creativity.

Seeing that the 1950s and 1960s encompass Day Six of the Planetary Underworld (the flowering of communication systems), we can see why so many complex databanks were being formulated during the 1950s. This outburst of creativity required strong links between all people--television got the news out to the planet. Remember the good old days when you could get important information on television? Now, only the Internet and cell phones are fast and free enough for people. Yet, just as television became controlled during the 1990s, global elite controls are being put on the Internet and cell phones as I write these words.

However, unlike television, now the time acceleration is too rapid to stop the flow of information, and next quantum communications will take over, since people are becoming more telepathic. This is because of the dualistic and right-brain nature of the Galactic Underworld, and because of what happens to human consciousness when people are galactocentric. The Mayan Calendar shows that humanity is right in the middle of an overwhelming intellectual waking-up process. I prophesy that in 2011, during the Universal Underworld, we will all be psychic, just as people were thousands of years ago during the Regional Underworld.
Barbara Hand Clow

Barbara Hand Clow is an internationally acclaimed ceremonial teacher, author, and Mayan Calendar researcher. Her numerous books include The Pleiadian Agenda, Alchemy of Nine Dimensions, Awakening the Planetary Mind, Astrology and the Rising of Kundalini, and The Mayan Code. She has taught at sacred sites throughout the world and maintains an astrological web site, www.HandClow2012.com

“The Mayan Code is really interesting and amazing because its statements are based on facts. For instance, it mentions the VEDA. We the Mayas know this people as the BEDZA. They used and followed the ancient calendar of 360 days, just as the Mayas did with the Haab calendar that has 360 days too. I recommend you to read this book.”

“Barbara Hand Clow has written the definitive book about 2012. This book, quite simply, is the best resource that now exists. A very wise human being has poured her heart, her soul, and her mind into these words. The Mayan Code is a great gift to us all.”

– Whitley Strieber, author of Communion and The Key

“Barbara Hand Clow’s inspired and well-researched articulation of the Mayan Calendar provides a significant aid to understanding the mechanics of the acceleration of time and the process of human evolution. She offers a refreshingly radical and hopeful outcome for our future beyond the Calendar’s end in 2011–2012.”

– Nicki Scully, author of Alchemical Healing and coauthor of Shamanic Mysteries of Egypt

“From now through 2012 we are walking what the Mayas call Xi Balba bih, ‘The Road of Awe.’ Tools that assist us in looking at the vast acceleration and wave of evolution that we are experiencing, through the largest possible soul lens, will be of great assistance during these transformative times. This book is highly recommended for that process.”

– Ariel Spilsbury, coauthor of The Mayan Oracle: Return Path to the Stars

"Protean, synthesizing, and vastly evocative, [Hand Clow] explores how our own personal healing is the most important factor as we prepare to make this critical jump in human evolution . . ."

"This exciting book grabs your attention and doesn't let go until the very end, and then some."

"I highly recommend the book to alchemists, spiritual adepts and seekers of mystery. The Mayan Code is indeed the handbook of spiritual alchemy as Barbara Hand-Clow provides us with copious illustrations, maps, diagrams, and dozens of references and cross-references, allowing this complicated material to be disseminated easily."

" . . . full of information that is not commonly found among the rows of shelves found in the bookstore philosophy section and it's rational and easy to read approach to our evolution, and our possible future, are laid out with precision and full of relevant knowledge."

"Barbara Hand Clow, author of more than a dozen books and DVDs, has taken the revelations espoused by Carl Johann Calleman in his book, The Mayan Calendar, to another extraordinary level."

SEE ALL
See more by Barbara Hand Clow
Thank you for signing up, fellow book lover!