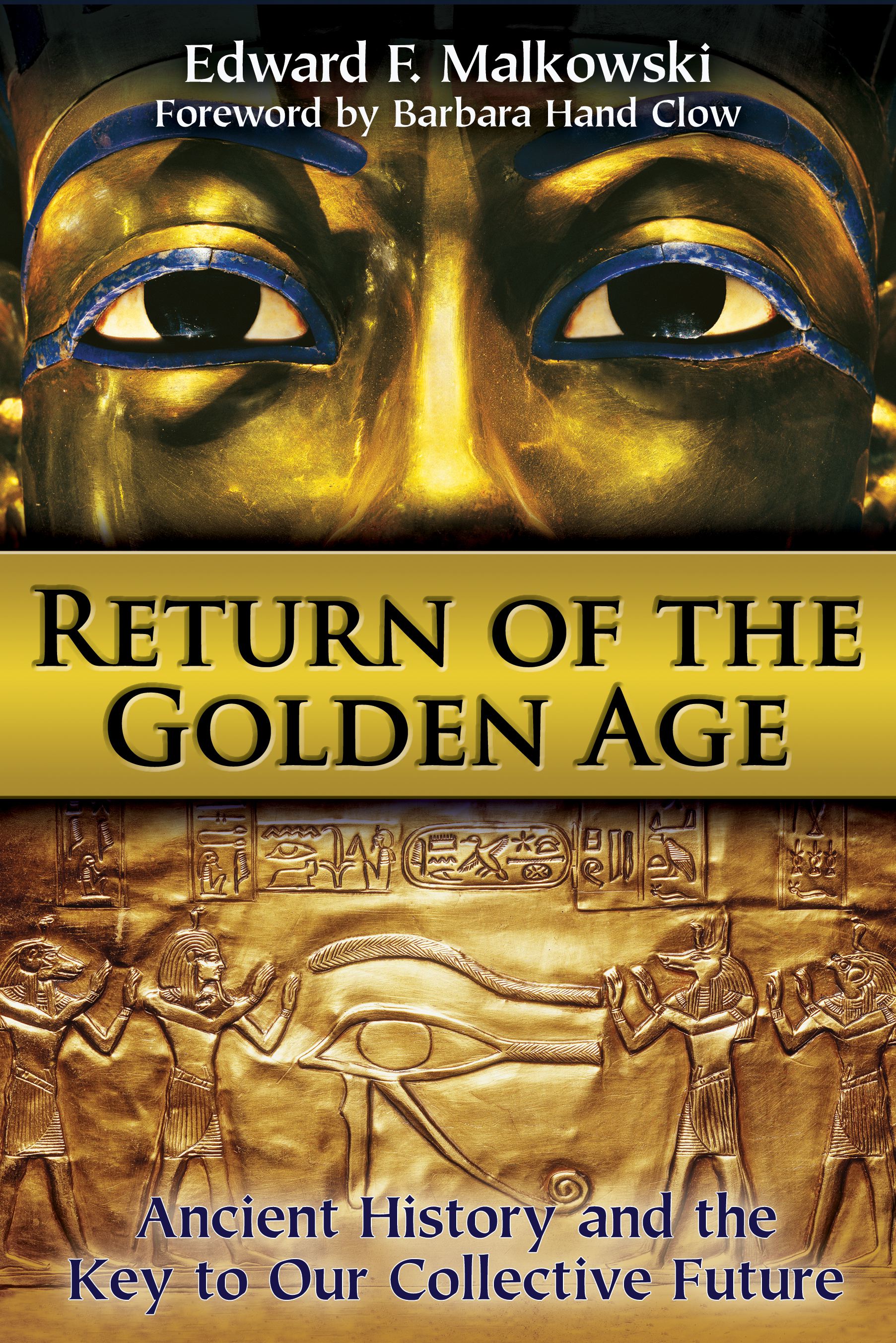 Return of the Golden Age

Ancient History and the Key to Our Collective Future

Since the beginning of recorded history humanity has been in a continuous struggle over land and resources. It continues today despite the abundance we have created through scientific innovation and technology. Why such a struggle for resources exists has never been explained. Neither has the human drive to own, accumulate, and hoard. Edward Malkowski reveals that the answer lies in recognizing the reality behind humanity's earliest myths. He shows that the opportunity is at hand to transcend these inherited selfish traits and return to a Golden Age of peace and abundance. Malkowski explores the hidden meaning behind stories such as the Epic of Gilgamesh, Plato's Atlantis, and myths of a new sky and a new sun, of great floods and the death of the gods, and of the preceding Golden Age. He connects these myths to a real extinction event that occurred 12,000 years ago. He explains how the survivors--our ancestors--were catapulted from utopia into a world of scarcity, scarring the collective mind of humanity and initiating the struggle for resources in an attempt to regain our lost paradise. He shows how our world system of economics, focused on ownership and based on the false belief of separateness--benefitting a few at the expense of the many--arose as a reaction to this catastrophe. Drawing on the pre-catastrophe teachings preserved by the ancient Egyptians, Malkowski reveals that we are returning to a celestial configuration parallel to that of the past Golden Age. Through our collective DNA memory and the creative power of our imaginations, we can end our 12,000-year quest to regain paradise lost and launch a new Golden Age of unity, abundance, and equality for all humanity.

HUMANITY’S 12,000-YEAR-OLD QUEST TO RETURN TO A GOLDEN AGE

Since the beginning of the twentieth century we have known that a very different Earth existed 12,000 years ago and that mass extinction was the result of devastating climate change. The mystery has always been what happened to the climate. Now we know. The Earth was a literal paradise, lush with vegetation and fruit, able to support a kingdom of large animals on all its continents. Farming wasn’t necessary. Likewise, there was no desire to hoard food or accumulate wealth. Living with such abundance provided the leisure and freedom to create a sophisticated civilization of unimaginable technology, a Golden Age of humanity, the evidence of which still exists to this day among the abandoned temples and pyramids of Egypt.

Then, the gods--the planets--died in a celestial flood of cosmic rain with thunderbolts of plasma discharge. The planets were pummeled into new orbits around the sun. Earth was scorched and knocked off its axis into a slow-moving wobble as she narrowly escaped death. The beautiful, comforting, and once-close gods of the sky--the planets Saturn, Mars, and Venus--were now only bright stars in a newly visible field of stars. No longer would the even warmth of Saturn promote a lush landscape continually filled with fruit and vegetables, and to survive humankind had to become carnivorous, even omnivorous.

Humankind was also affected psychologically. Such terror there would be watching the sky fall. Such horror there would be watching your fellow humans die. Thus the catastrophe is responsible for the mental condition the human species finds itself suffering from: post-traumatic stress syndrome. From generation to generation, this syndrome has manifested itself through the belief of the divine kingship, then into the modern institution of religion; there, we have maintained in our psyches the notion that we are an evil species that has somehow angered God and that we are in need of salvation. Such a notion instills fear and paranoia deep into culture and society and perpetuates the need for authoritarian rule. Thus, Original Sin is also tied to this ancient catastrophic event.

With the events of the cataclysm forgotten, humankind’s fall from Paradise took on new meaning in that all people were born of Original Sin, a legacy whose origins lay in a cataclysmic event: Adam and Eve’s expulsion from the Garden of Eden. Original Sin, however, never existed and doesn’t exist. God was never angry. Religion, then, in its proper context, can be viewed as a traumatic reaction to calamity. In other words, the rationalization and need to place cause for catastrophe that otherwise has no cause. That cause being humanity must have done something wrong, which is captured in a single vague word: disobedience.

The truth of human nature, however, is quite the opposite of what dogmatic religious beliefs demand of their followers. As mammals, we are a species whose existence is genetically rooted in our ability to care for and feel tenderness toward the life we create as well as our ability to continually nurture that life. Such a polarization between what is instinctive to us and what beliefs are imposed upon us through this artificial cultural institution of sin and authoritarianism creates misery, and it does so through the systems of economics and politics we have created for ourselves embodied in the competition and labor we must endure to acquire life sustaining resources.

Humanity, though, is resilient and with the growing awareness of our own nature and how our nature is a part of a grander Nature--even the cosmos--we have been healing ourselves all along. Reconciliation, however, to the new world that was thrust upon us 12,000 year ago is a slow process, with each processional age providing its own healing circumstances. With 148 years left before the Age of Aquarius (2160-4320 CE), we stand on the brink of a new age of humanity. The unification of all the world’s societies into a single global civilization--which has already begun--will bring change. We already have the technology to provide food, fuel, and housing for every single person in the world. If history does repeat itself one has to consider carefully the role of human experience and its effect upon the human state of mind, and how that state of mind shapes society, privately and politically. Today, with such heightened conscious awareness of ourselves, the planet, as well as the universe we live in, along with our seemingly limitless technical capabilities, there is no reason we shouldn’t be entering a golden age. The only thing stopping us is the perception that there are not enough resources to go around, a perception that dates back 12,000 years. A perception that we have used over many thousands of years to create a world based on resource hoarding and the domination of people, a system of violence that anthropologist Neil Whitehead refers to as the “cannibal war machine.”

I find it fascinating that humankind, as a phenomenon and as an experience, has reached a similar state of unification that was reached long ago according to the mythical story of the Tower of Babel. Today, a single language and a common speech are within our grasp. And, just as long ago, “nothing they have imagined they can do will be impossible for them.” As the arrow of time continues to move forward, there are increasingly more people imagining a world without poverty and war, and without domination and control. History proves that totalitarian regimes, even those of a subtle nature, can never be sustained for very long. Indeed, it is a mistake to think that a single person or a small group of people can control a population of billions. No one person or group of people regardless of their cumulative wealth or power will be able to halt the progression of humankind in expressing itself, socially, artistically, scientifically, or technically. Imagination, which every person has, can never be controlled.
Edward F. Malkowski

Edward F. Malkowski is the author of Ancient Egypt 39,000 BCE, Sons of God--Daughters of Men, Before the Pharaohs, and The Spiritual Technology of Ancient Egypt. He is a historical researcher in Lincoln, Illinois.

“Ed Malkowski’s previous books show evidence of Civilization X in a well-researched, enlightening, and entertaining way. In Return of the Golden Age he takes readers from the present to precataclysmic times and the Golden Age that existed with Civilization X. He then brings us back to the upcoming Golden Age. A truly wonderful read!”

“Can our educational, social and economic systems change from their emphasis on how to make money to buy more stuff to an emphasis on embracing higher consciousness and expanded awareness as the goals in life? Can we rise up from our narrow, self-centered lives to become people of genuine wisdom? Author, Ed Malkowski thinks we can, and he and others see it beginning to happen in the midst of the mess we have now. Let’s hope he’s right.”

Return of the Golden Age

Ancient History and the Key to Our Collective Future