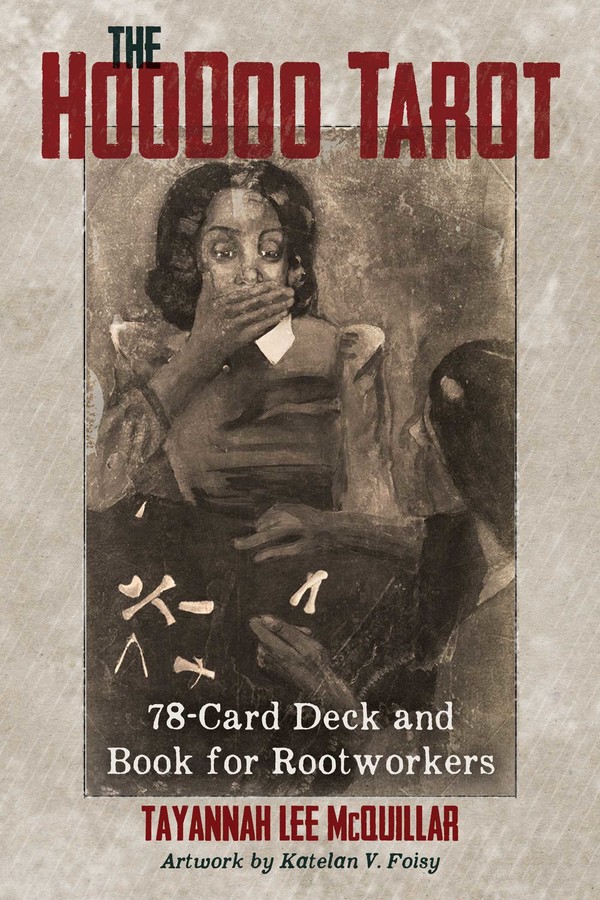 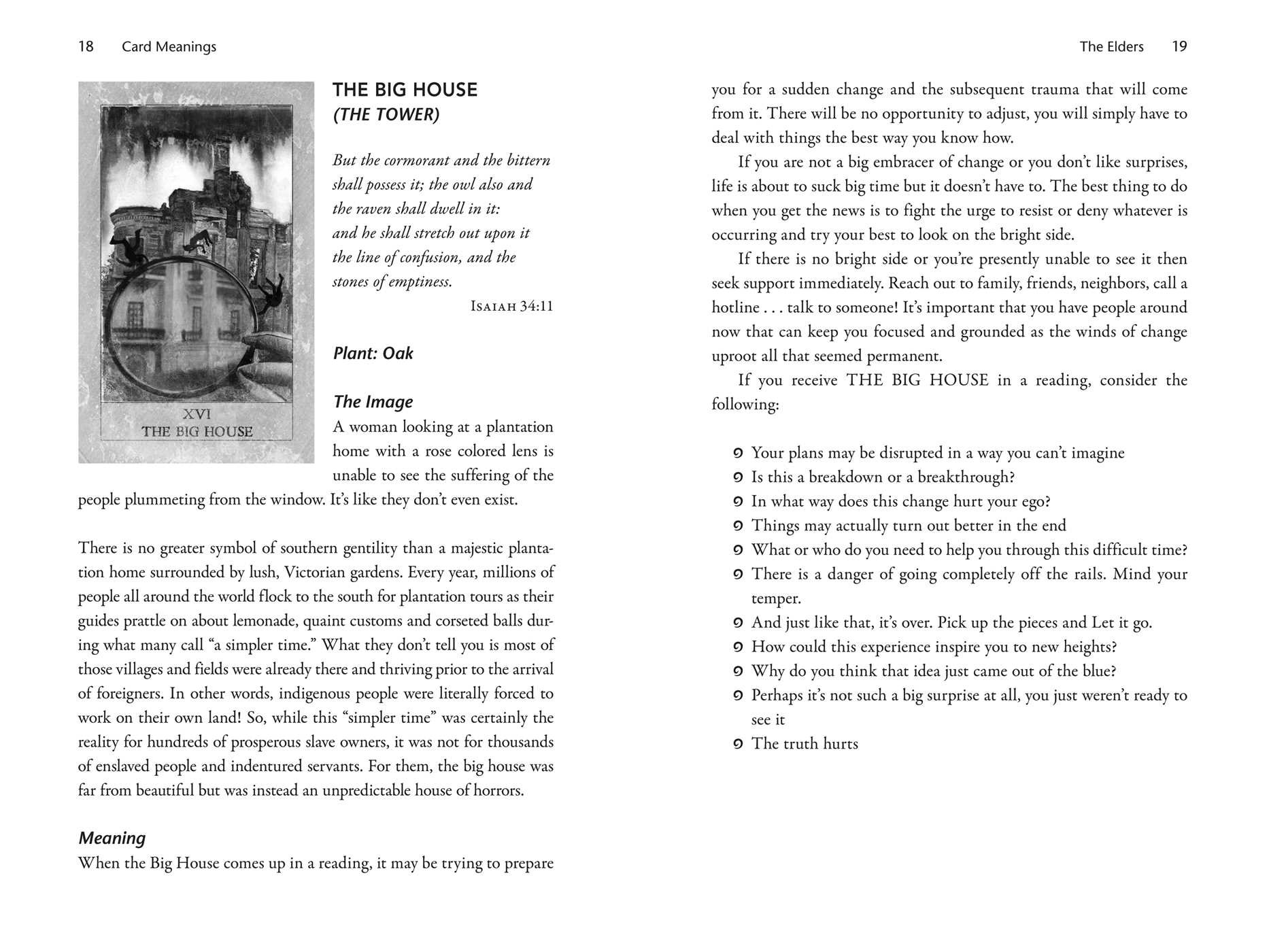 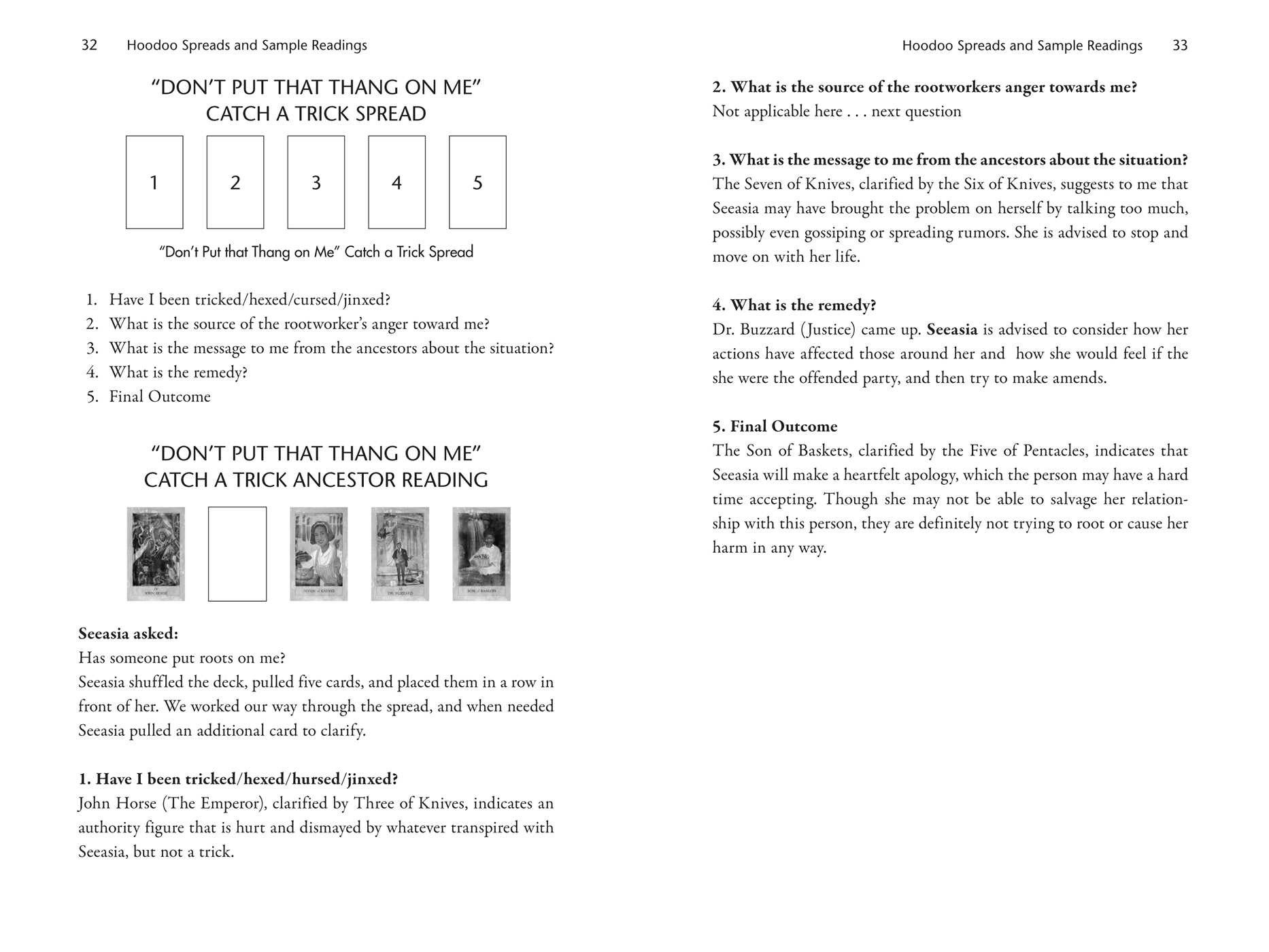 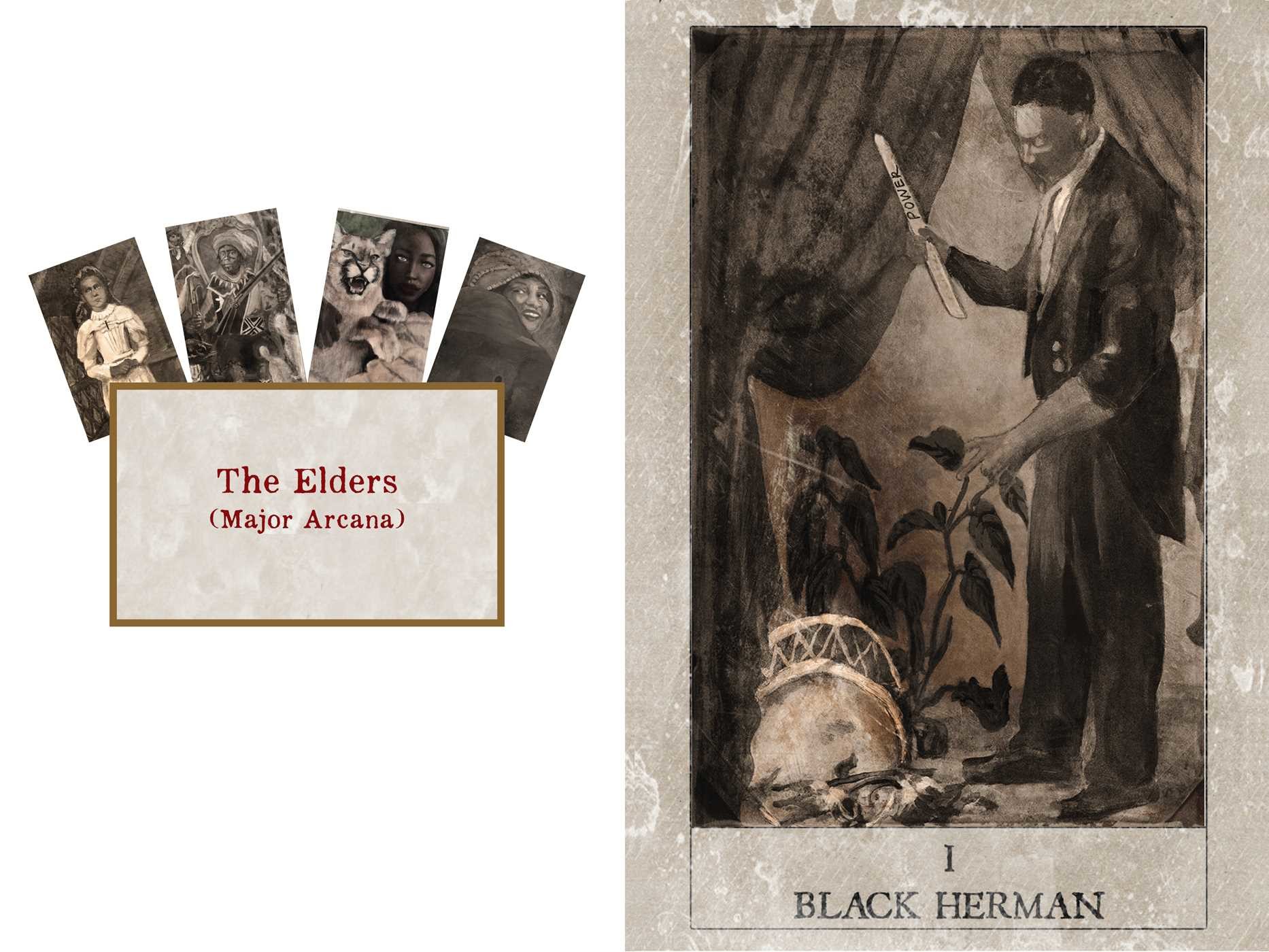 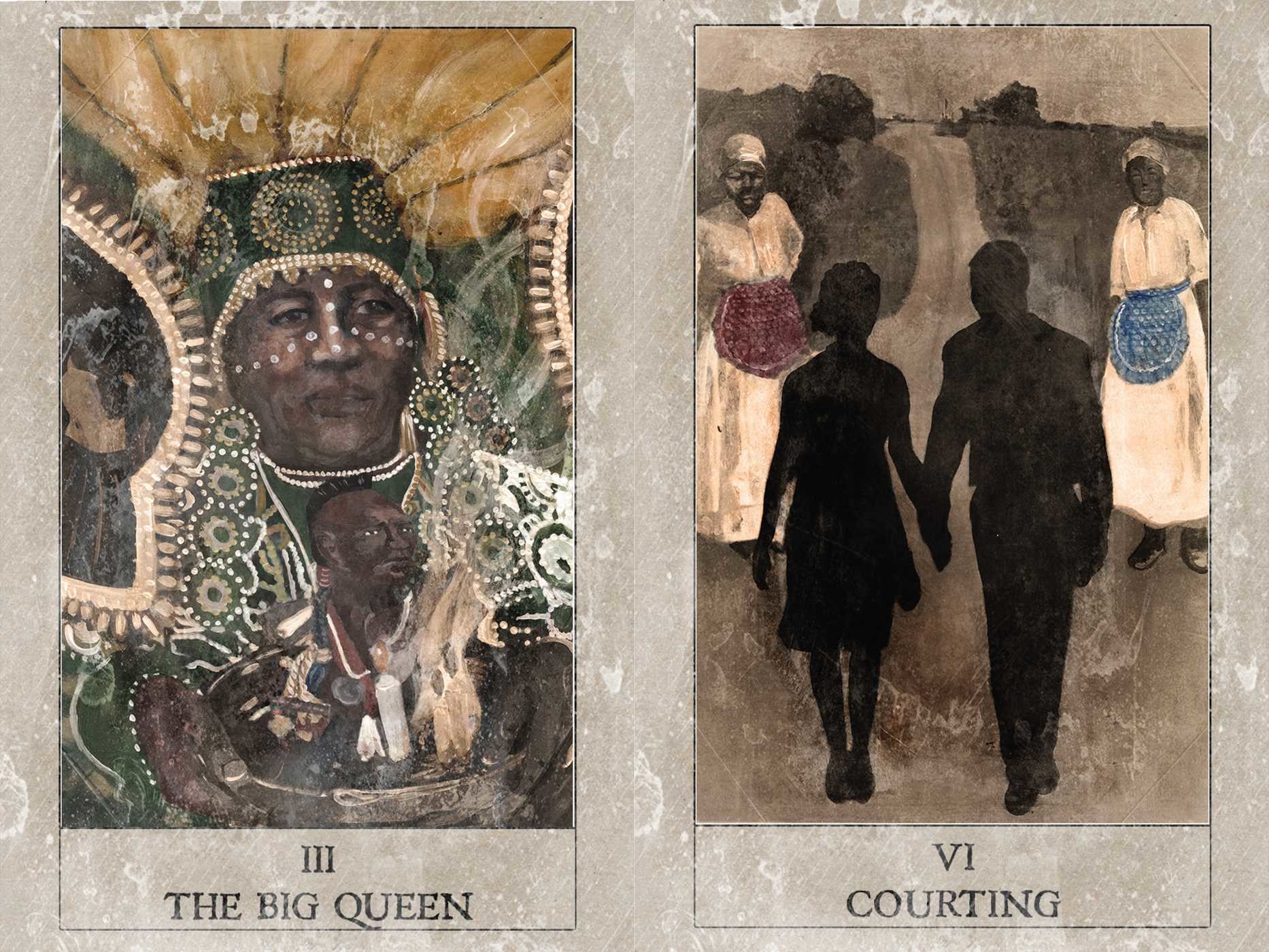 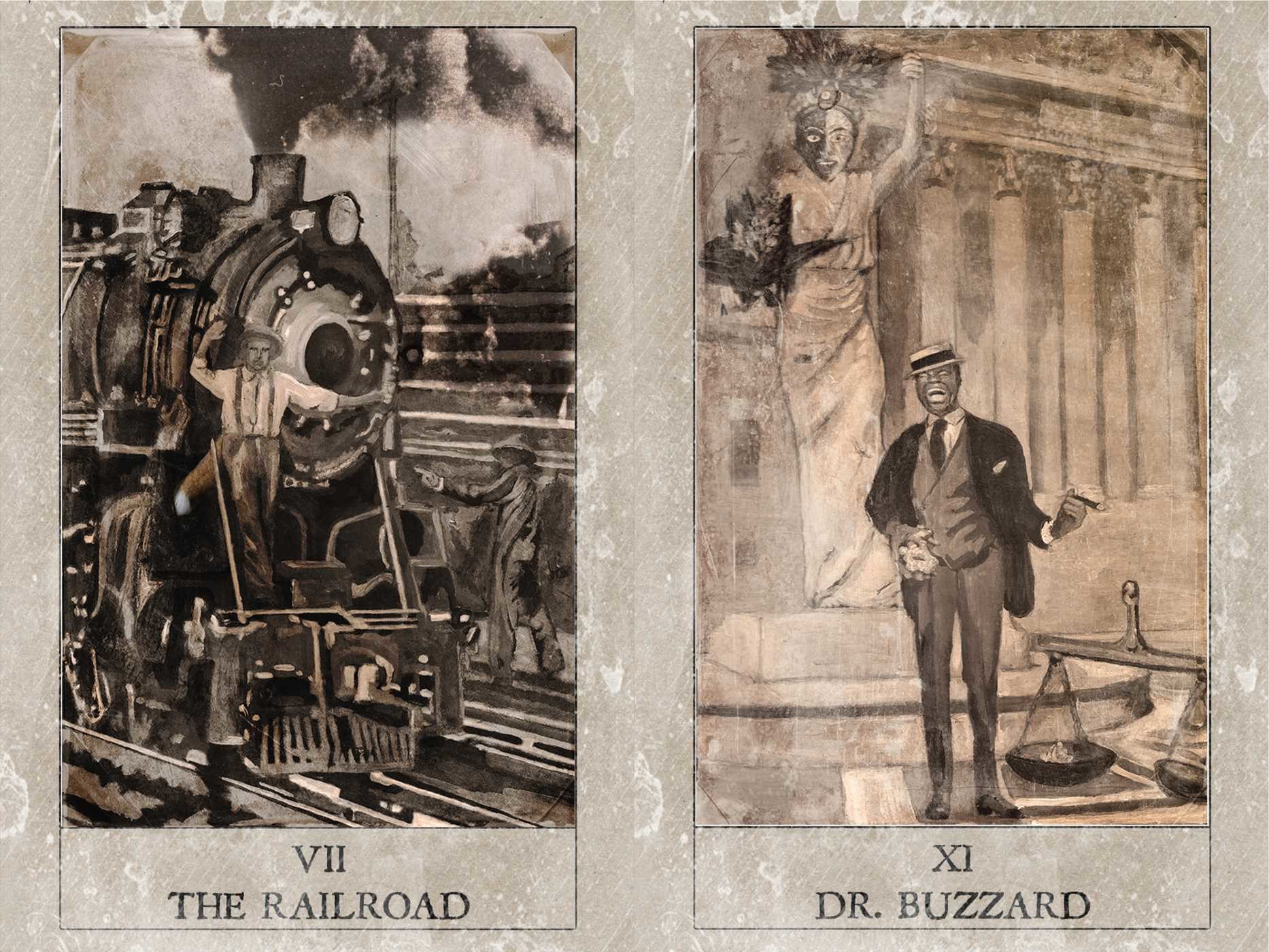 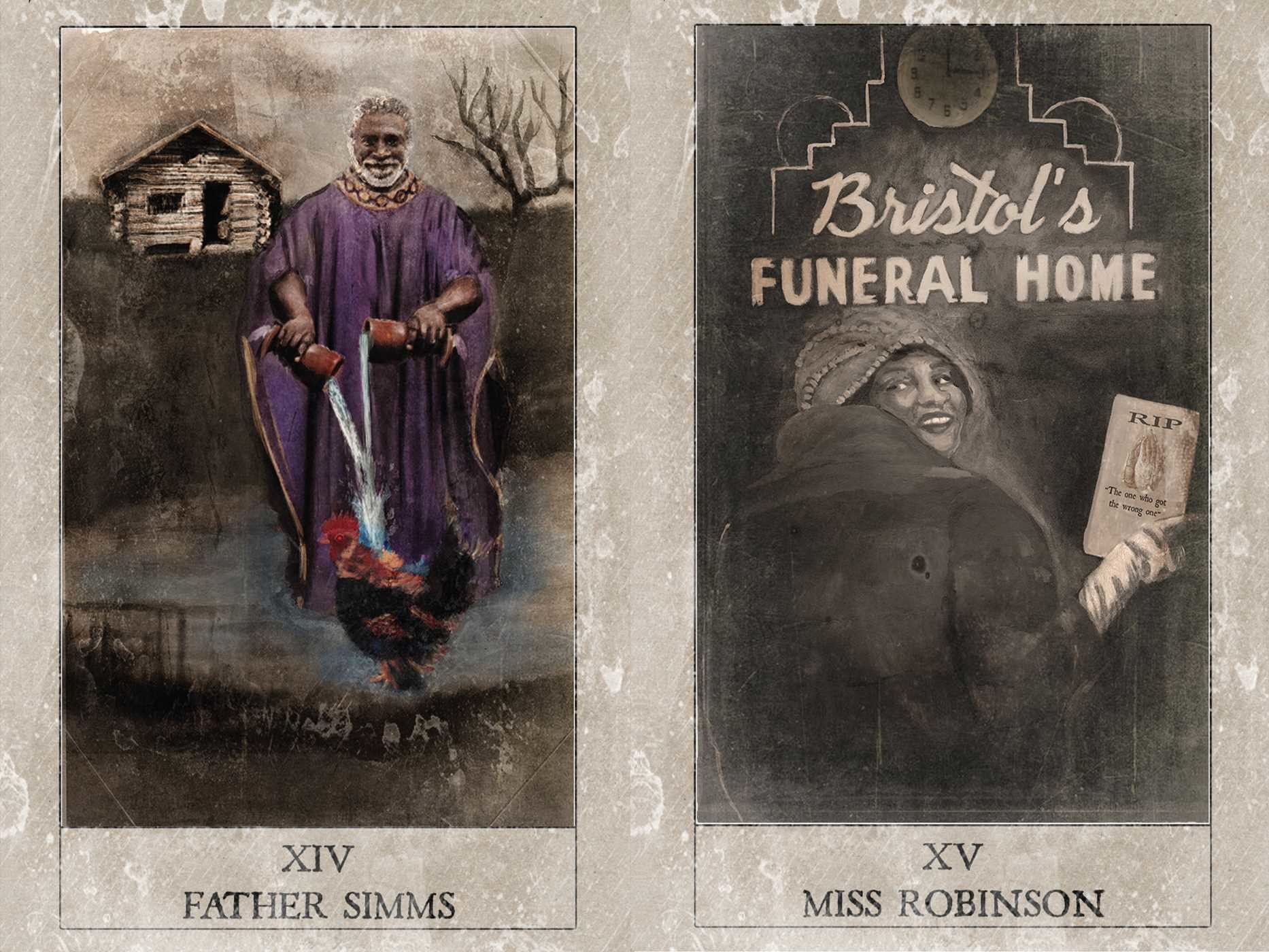 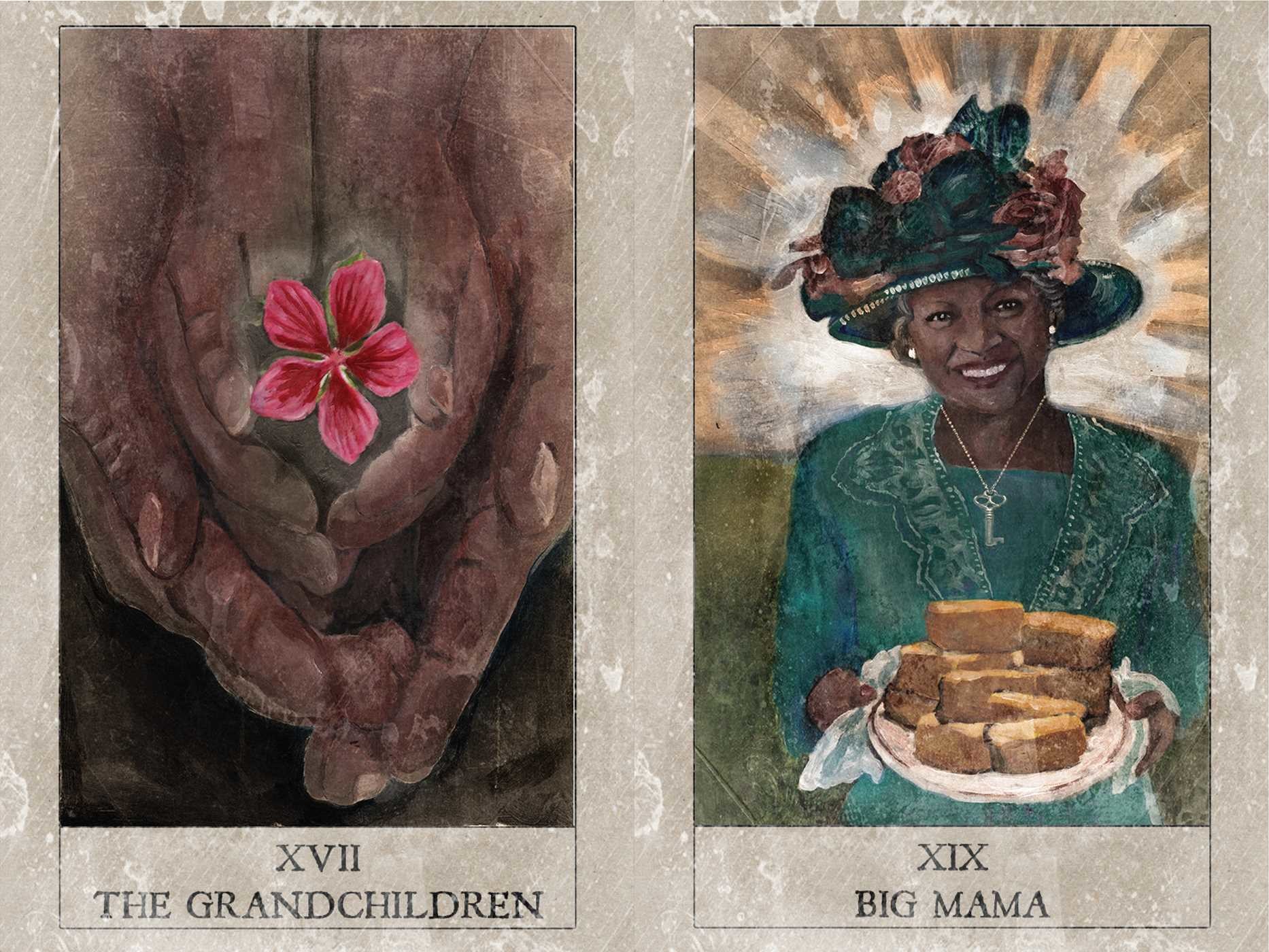 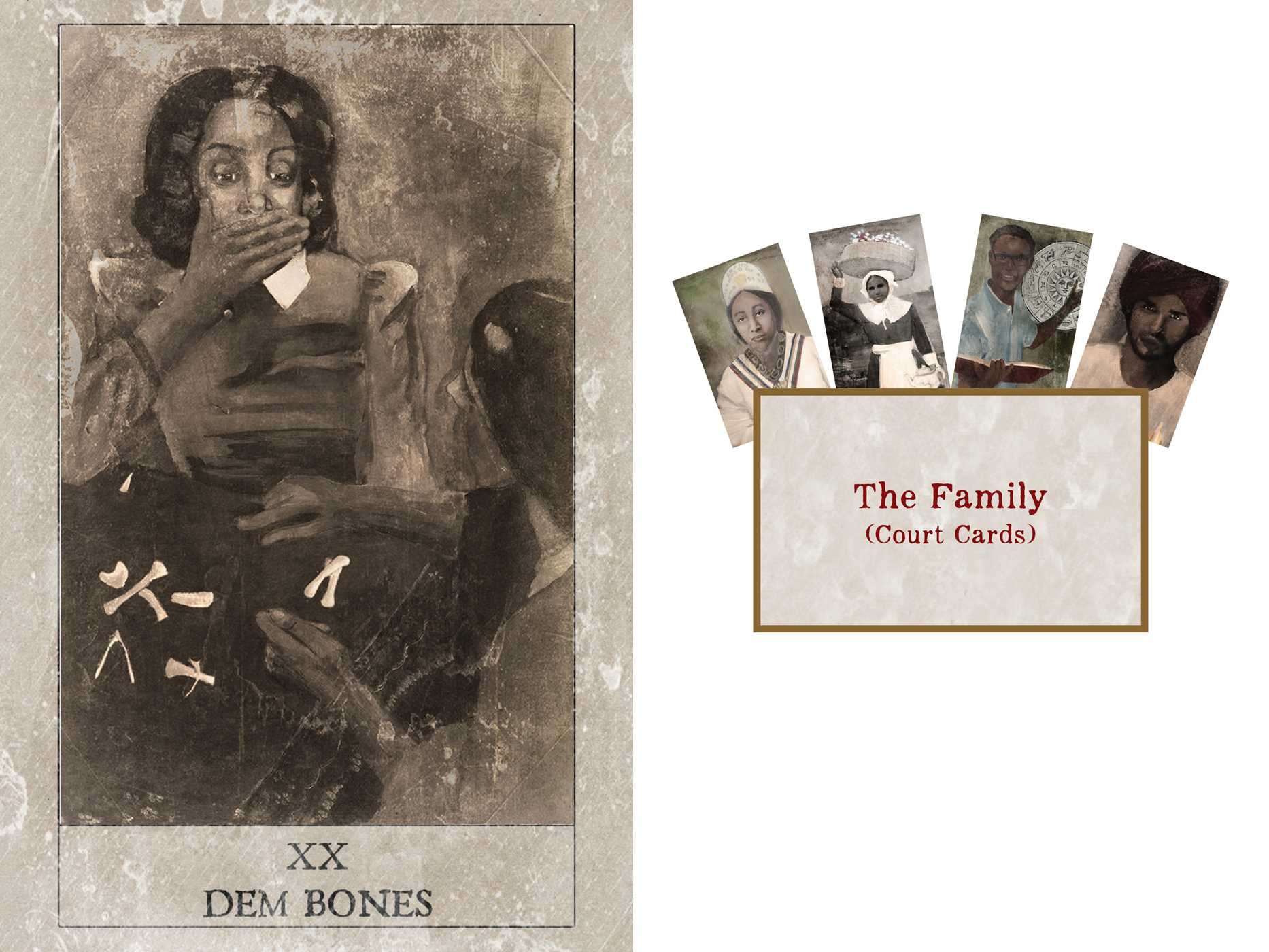 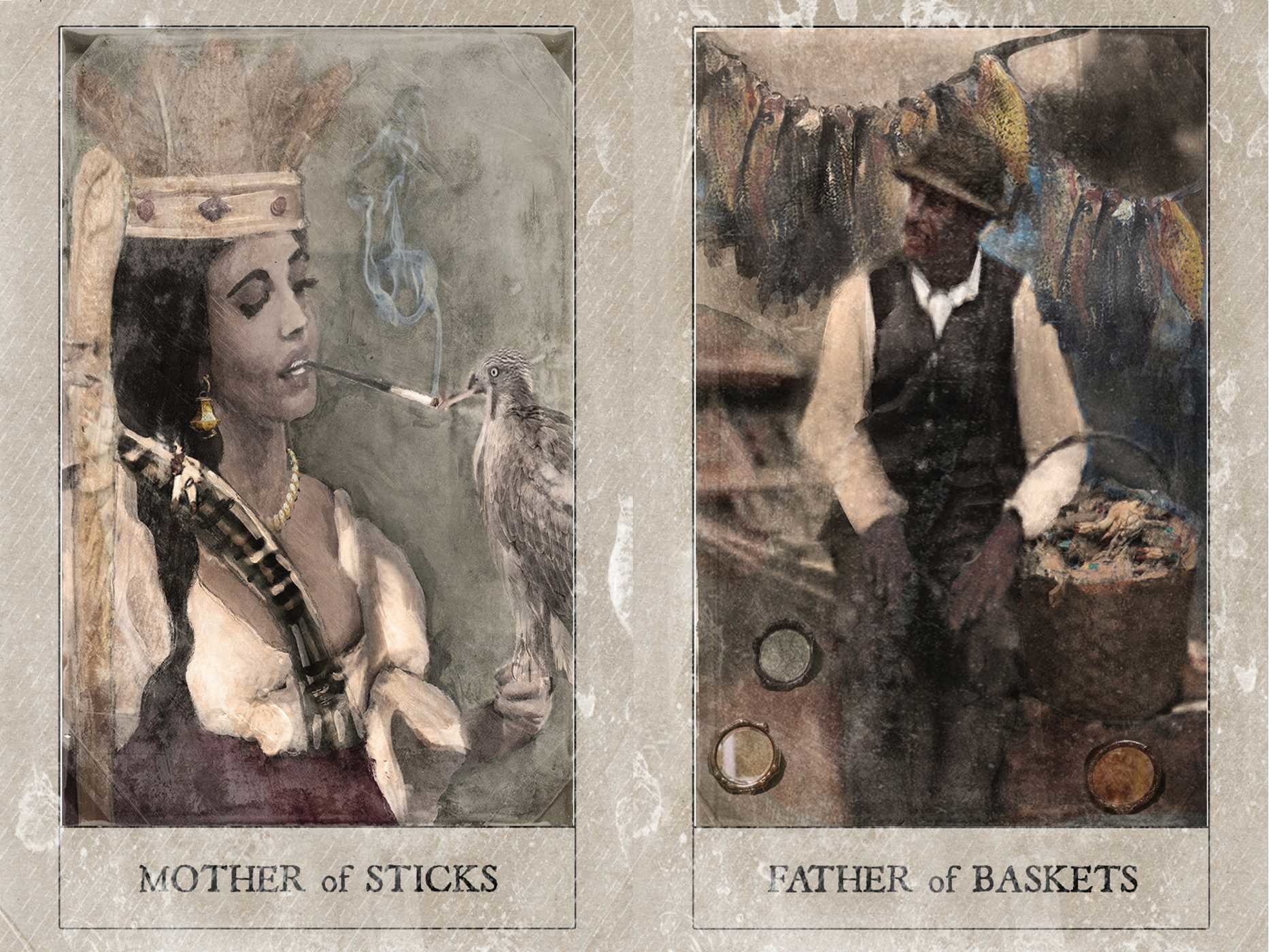 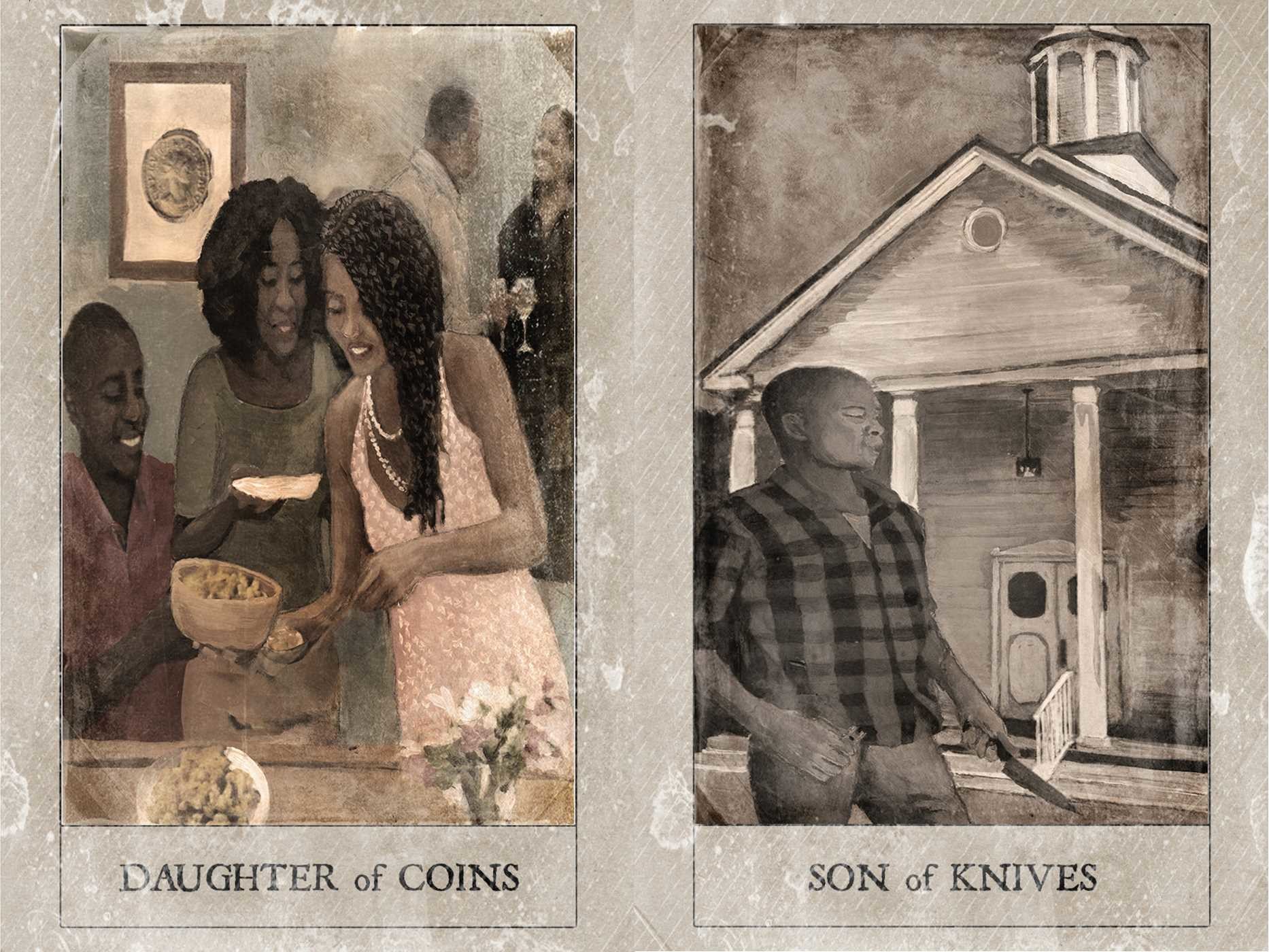 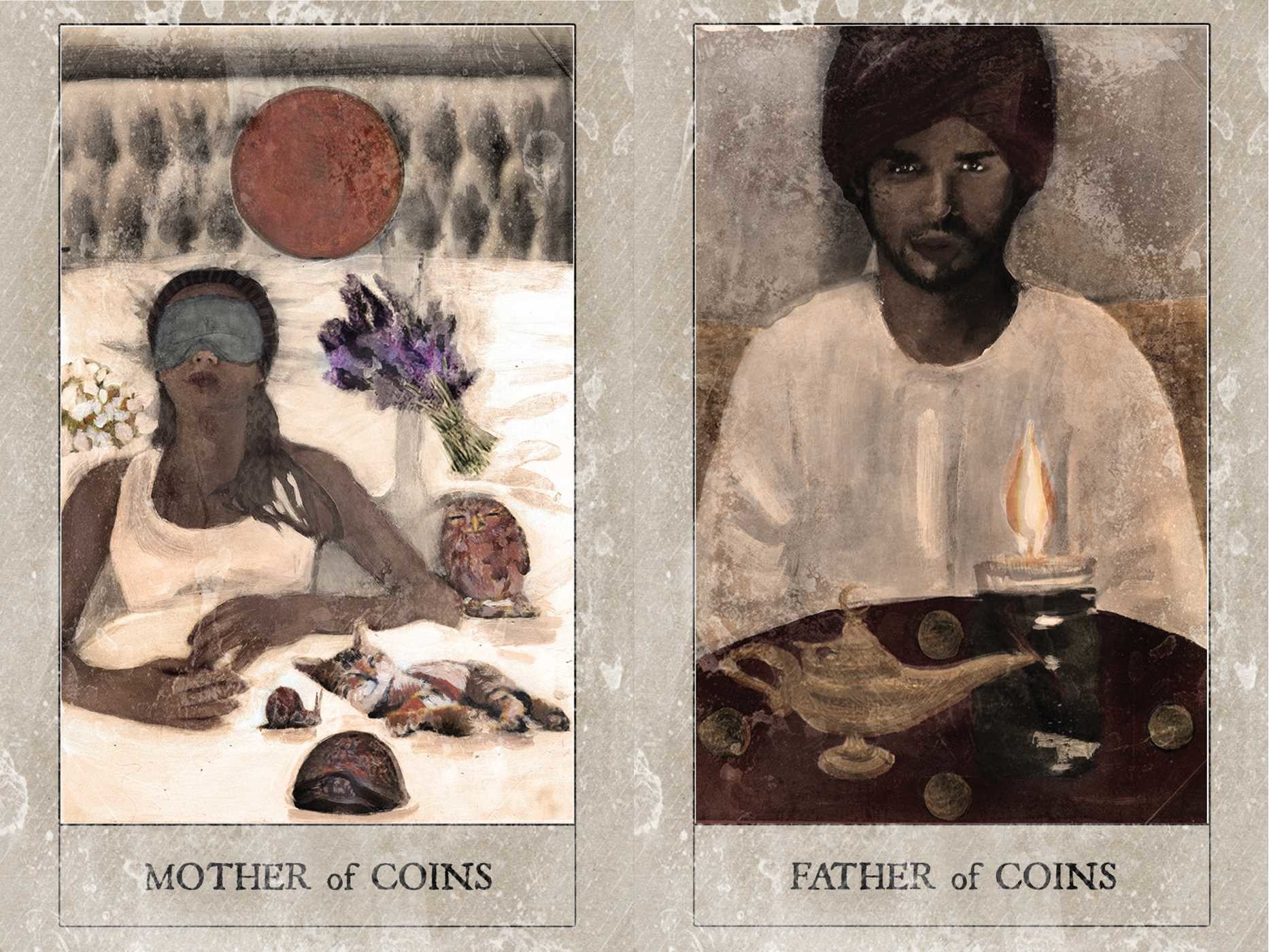 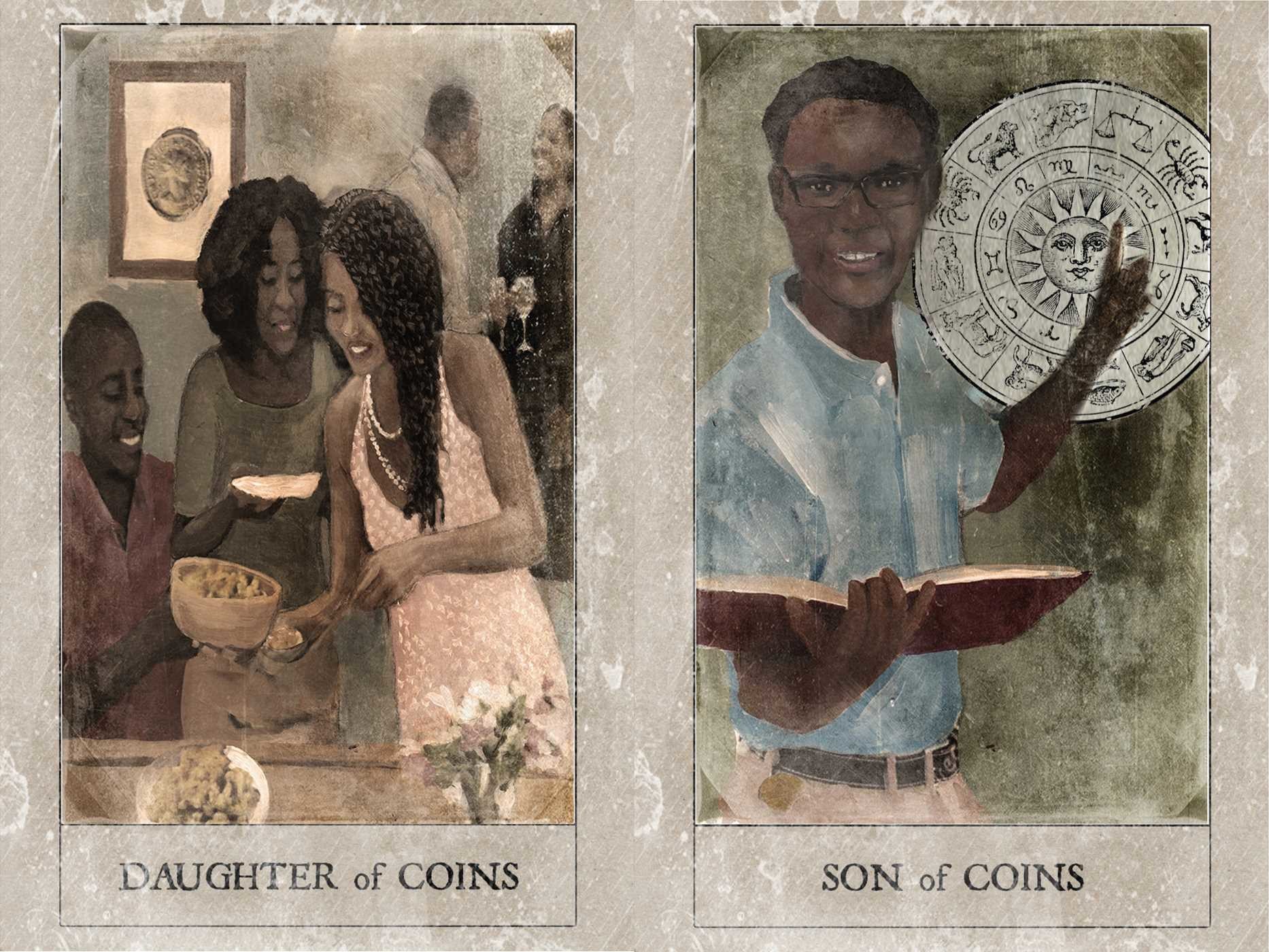 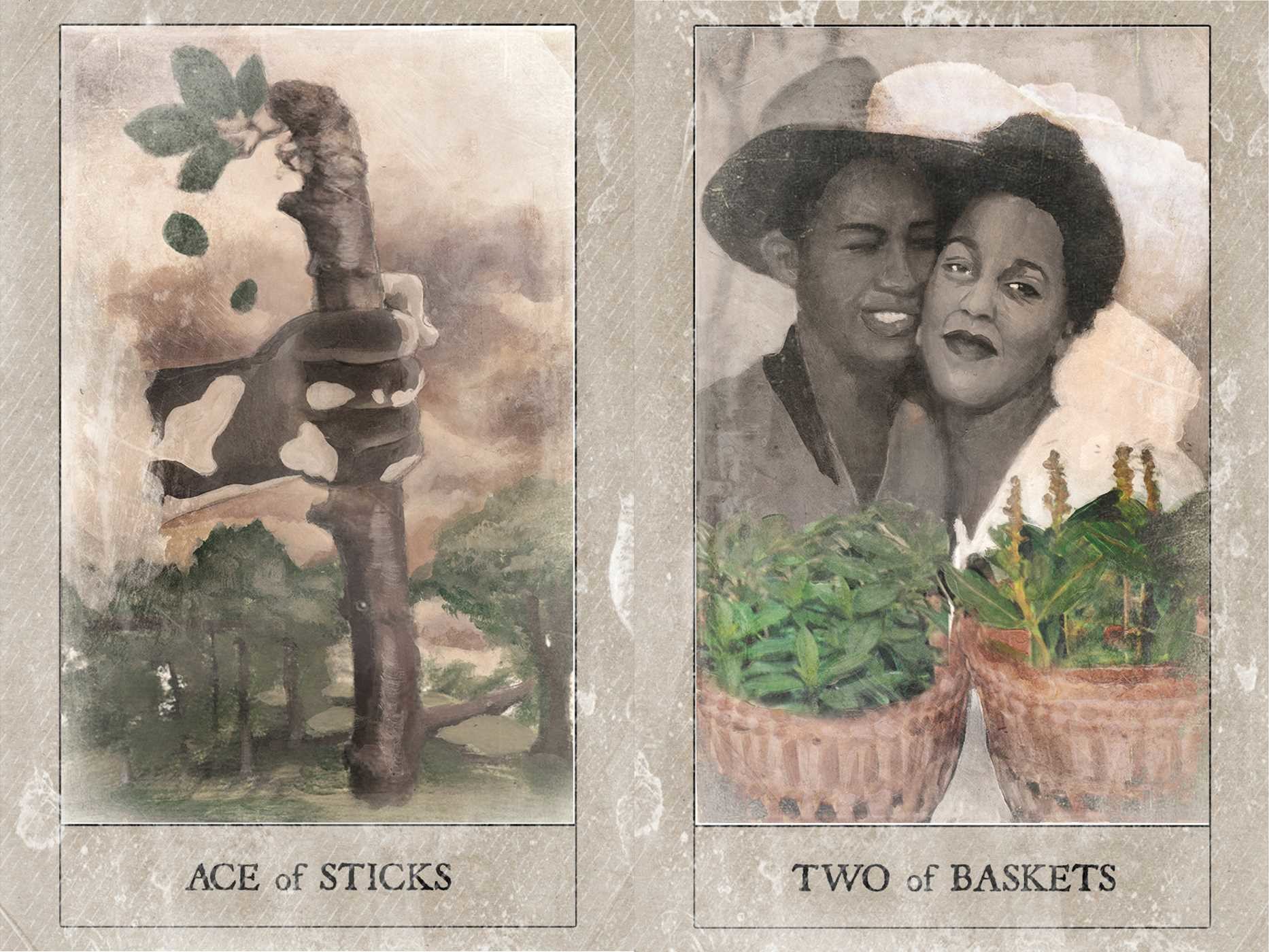 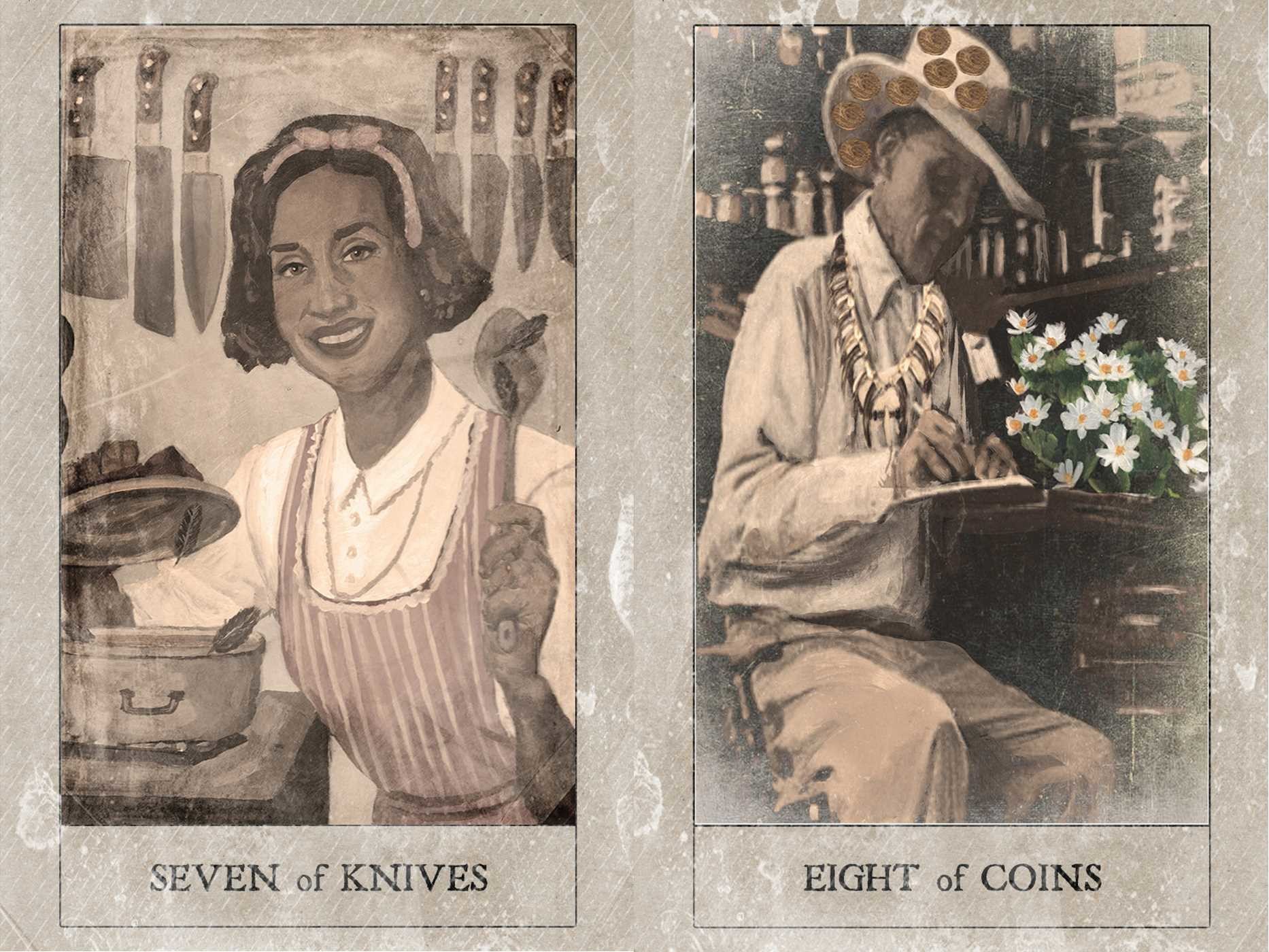 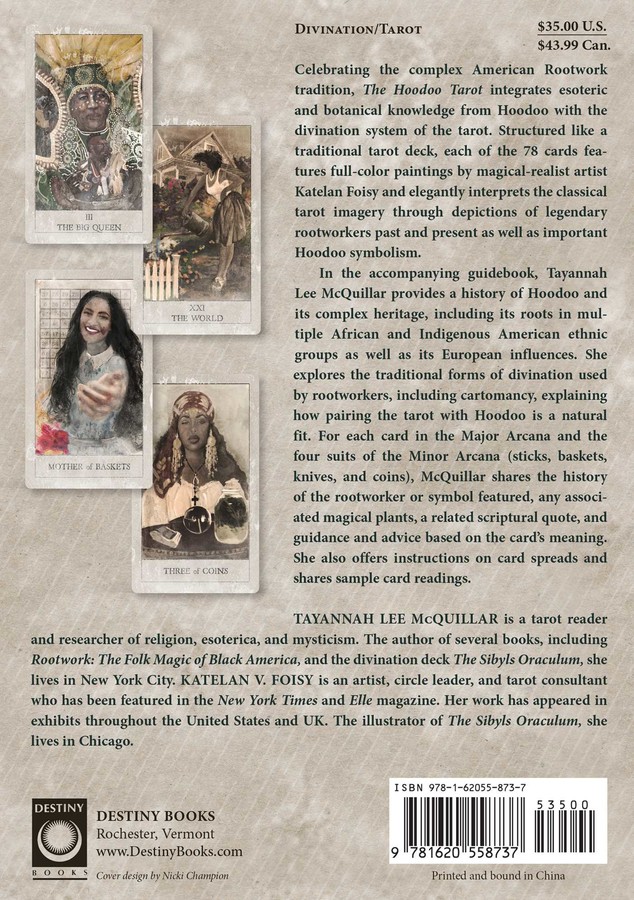 78-Card Deck and Book for Rootworkers

A divination deck and guidebook rooted in the American Hoodoo tradition

• Provides in-depth card meanings for each card in the Major Arcana and the four suits of the Minor Arcana, including the history of the rootworker or symbol featured, any associated magical plants, and guidance based on the card’s meaning

• Offers a history of Hoodoo and its complex heritage, including its roots in multiple African and Native American ethnic groups as well as its European influences

Between the 17th and 19th centuries, many Indigenous Americans and people of African descent intermarried and socialized more often than is acknowledged by mainstream history books and scholars. These interactions produced not only a multicultural people but also a body of knowledge that is known today as Hoodoo or Rootwork.

Celebrating the complex American Rootwork tradition, The Hoodoo Tarot integrates esoteric and botanical knowledge from Hoodoo with the divination system of the Tarot. Structured like a traditional Tarot deck, each of the 78 cards features full-color paintings by magical-realist artist Katelan Foisy and elegantly interprets the classical Tarot imagery through depictions of legendary rootworkers past and present as well as important Hoodoo symbolism.

In the accompanying guidebook, Tayannah Lee McQuillar provides a history of Hoodoo and its complex heritage, including its roots in multiple African and Indigenous American ethnic groups as well as its European influences. She explores the traditional forms of divination used by rootworkers, including cartomancy, explaining how pairing the Tarot with Hoodoo is a natural fit. For each card in the Major Arcana and the four suits of the Minor Arcana (sticks, baskets, needles, and knives), McQuillar provides an in-depth card meaning that draws on both Tarot and Hoodoo tradition. She shares the history of the rootworker or symbol featured, any associated magical plants, a related scriptural quote, and guidance and advice based on the card’s meaning. She also offers instructions on card spreads and shares sample card readings.

Offering a divination system rooted in the Indigenous and African experience in North America, The Hoodoo Tarot provides a hands-on way to honor and explore the magic of Hoodoo for personal growth and spiritual inspiration.

The Origin of Hoodoo

No one knows exactly when what we know today as Hoodoo began, but it probably started not too long after Indigenous Americans, Africans, and Europeans came into daily contact with one another during the colonial era. All three groups had significant indentured-servant and enslaved populations that worked, socialized, and intermarried with one another on a regular basis. Most Europeans during the colonial era were overwhelmingly Protestant and hailed from England, Ireland, Scotland, Germany, and the Netherlands.

The majority of the approximately 388,000 African people that were shipped to North America (including Canada) between the seventeenth and nineteenth centuries came from a variety of ethnic groups. They were Malagasy, Kongo, Igbo, Maghrebis (Moors), Akan, Mandé, Hausa, and Fulbe, among many others. There were hundreds of Indigenous tribes in the southeast alone prior to colonization, the smaller of whom later joined or were absorbed into larger confederacies, such as the Creek or the Cherokee. Unbeknownst to many, there were also other nationalities and ethnic groups that were enslaved, indentured, or voluntarily migrated to North America during the colonial era as well. There were dark-skinned “coolies” from India and China, Pacific Islanders, and Roma people (a.k.a “gypsies”), many of whom were reclassified and denationalized in official documents by using descriptors such as white, mulatto, or negro. These groups are also the ancestors of many, many Black Americans who may have incorporated their knowledge into Hoodoo, but today have no clue they have this ancestry. All of the aforementioned peoples from around the world had their own cosmologies, philosophies, folklore, and remedies.

Thus, some might say that Hoodoo is North America’s only totally unrestricted repository of esoteric knowledge.

Getting to Know the Hoodoo Tarot

The structure of The Hoodoo Tarot is based on the extended family unit, which was the traditional familial structure of the vast majority of Indigenous peoples.

The Elders, the Family, and the Community

Just as the Major Arcana is the foundation of the tarot, the Elders are the foundation of the family. The Elders in Indigenous communities serve the same purpose as the Majors: to transmit age-old knowledge and wisdom via the use of complex symbolism and story. Thus, the Elders are venerated as living libraries from which an unfathomable amount of data may be accessed regarding a culture’s traditions, history, and what that people perceives to be their ultimate purpose (as warriors, artisans, etc.).

The Family is equivalent to the court cards in standard tarot decks. In this regard, the Family in this deck actually represents the idealized American nuclear family model, instead of aristocrats and their servants. However, the Family and court cards share a similar purpose, in that they both represent specific people or personality types.

The Community relates to the Minor Arcana, as they both reflect the lessons of the Elders regarding mundane life experiences.

The tools represented by the suits reflect everyday objects utilized by all Americans. However, the esoteric significance and aesthetic of these tools (when applicable), were often specific to people of Indigenous and/or African descent in general, and at times, rootworkers specifically.

What do the four tools represent?

Do not judge by appearances, but judge with right judgment.
--John 7:24

A woman puts her hand over her mouth in shock at what the bones on the table reveal to her.

Astragalomancy, meaning divination using bones or dice, was practiced by Indigenous American and African people. Divination with bones requires the reader to associate different meanings with each bone, based on where and how they land. The bones of chickens and cats were the most commonly used, but other small and medium-sized animals were also acceptable. Contrary to popular belief, the choice of which animal to use was strictly up to each individual rootworker. A set of dem bones could include not only the remains of an animal, but also other items such as keys, seashells, and crystals. Like other forms of divination, all the items in a reader’s set had clear associations, but it’s a reader’s innate talent that determines accuracy.

When Dem Bones appears in a reading, you are being reminded that it’s time to focus on what you need, rather than what you want. Most likely, you will have to make some tough choices, but if you’re willing to put your ego aside and do what you have to do, the best possible outcome is guaranteed.

Dem Bones may be reminding you that people are going to talk about you no matter what you do. So make sure that you remain in alignment with your goals, dreams, and aspirations. Acknowledge that no one escapes judgment, even if the judge is oneself.

Dem Bones could also indicate that it is time for a more in-depth reading concerning a matter of great importance. This reading will provide relief and solutions to your problems.

If you receive Dem Bones in a reading, consider the following:

• It may be time for an honest self-assessment.
• What is your reputation? Are you still in alignment with it?
• If you want a fresh start, start fresh.
• The neutral position is no longer an option.
• Do others need to know where you stand on that issue? If so, stop stalling and tell them!
Tayannah Lee McQuillar

Tayannah Lee McQuillar is a tarot reader and researcher of religion, esoterica, and mysticism. The author of several books and divination decks, including The Hoodoo Tarot and The Sibyls Oraculum, she lives in Winston-Salem, North Carolina.

"In keeping with the roots of Hoodoo, this powerfully-illustrated tarot deck is organized along the lines of an extended family. Elders comprise the Major Arcana, the family inhabits the court cards, and the rest of the Minor Arcana reflects the community and mundane life. Many readers will buy this deck for Foisy’s truth-is-strength illustrations. With use, I think they will discover layers of insight into their personal lineage, regardless of their ethnicity."

“Tayannah Lee McQuillar and Katelan V. Foisy have given contemporary medicine people in the Americas and beyond a rare and special gift. The in-depth research, interviews, and life experience of both practitioners shine like a beacon through this divination tool, helping us ground our practices in historical precedent and tried-and-true wisdom. Nothing has been lost that cannot be found.”

“. . . dispels common notions and myths about the meaning and origin of Hoodoo Tarot. I recommend that anyone--scholar or lay--who has interest in the practice of tarot and the complicated cosmos that it represents read this book. It is an insightful view of a people and practices that are mired in controversy and misunderstanding.”

"I don’t know where to begin with this review. I have received, and purchased, many tarot and oracle decks throughout the years, but I don’t think I have ever learned as much as I did from The Hoodoo Tarot by Tayannah Lee McQuillar."

"The Hoodoo Tarot was made with care and consideration and it shows. I recommend this deck if you have an interest in both Tarot and Hoodoo, are looking for a deck showing diverse people from various backgrounds, crave a perspective closer to your roots or spiritual path or just want to learn more about Hoodoo. Highly Recommended."

"The first thing I did upon opening these cards was to start taking photos of them to send them to my friends. I was absolutely amazed by the incredible artwork of this tarot. Both beautiful and haunting, the deck transported me to another world, telling me stories and taking me to unknown places until the moment that they revealed themselves to be parts of my subconscious. I am sure I am going to be dreaming about them when I go to bed. The images just stuck inside my mind for the rest of the day."

78-Card Deck and Book for Rootworkers