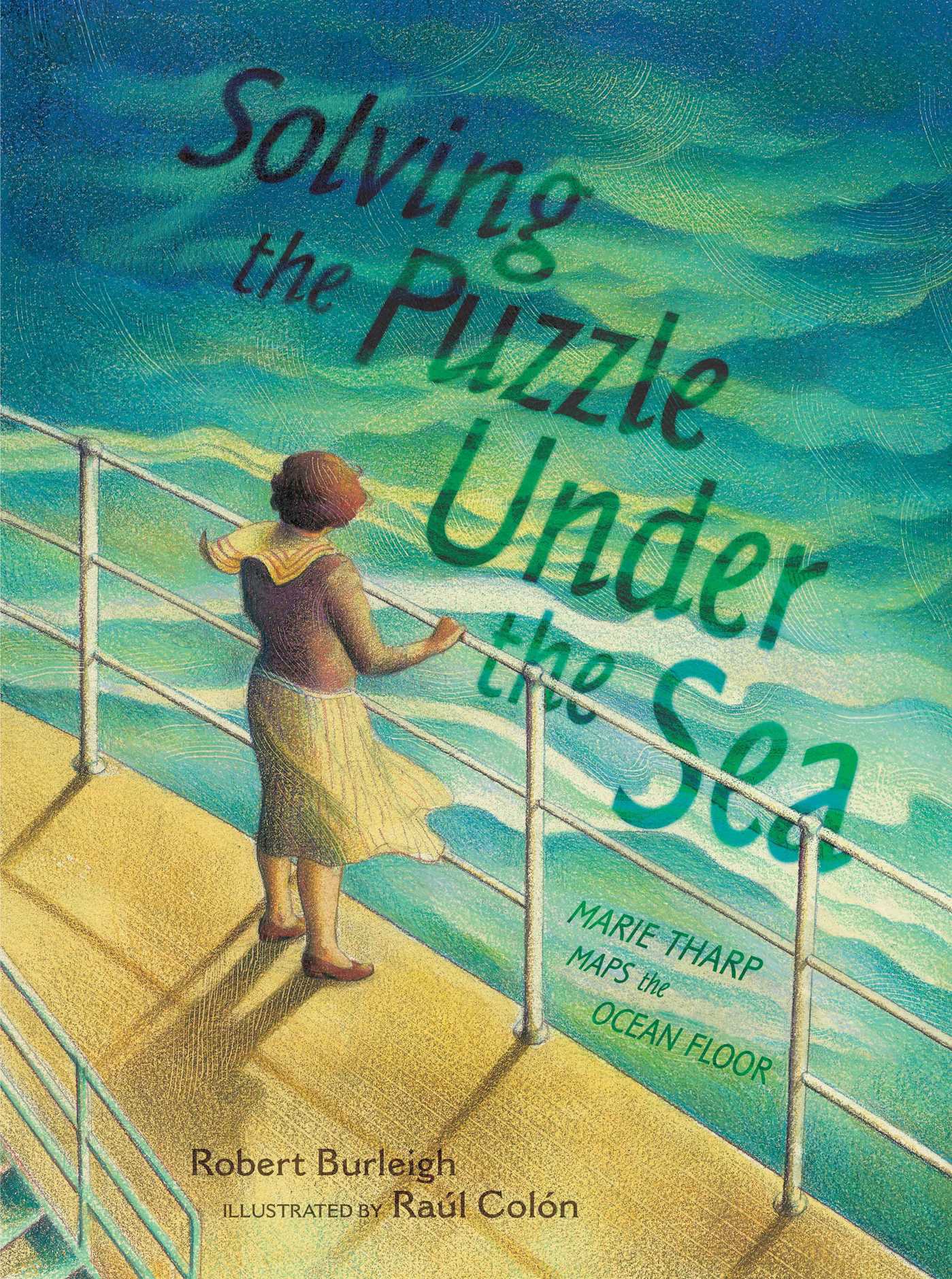 Solving the Puzzle Under the Sea

“An ideal introduction to a lesser-known scientist and an important understanding about how the Earth works.”—Kirkus Reviews, starred review

Filled with gorgeous illustrations by acclaimed artist Raúl Colón, this illustrated biography shares the story of female scientist, Marie Tharp, a pioneering woman scientist and the first person to ever successfully map the ocean floor.

Marie Tharp was always fascinated by the ocean. Taught to think big by her father who was a mapmaker, Marie wanted to do something no one had ever done before: map the bottom of the Atlantic Ocean. Was it even possible? Not sure if she would succeed, Marie decided to give it a try.

Throughout history, others had tried and failed to measure the depths of the oceans. Sailors lowered weighted ropes to take measurements. Even today, scientists are trying to measure the depth by using echo sounder machines to track how long it would take a sound wave sent from a ship to the sea floor to come back. But for Marie, it was like piecing together an immense jigsaw puzzle.

Despite past failures and challenges—sometimes Marie would be turned away from a ship because having a woman on board was “bad luck”—Marie was determined to succeed. And she did, becoming the first person to chart the ocean floor, helping us better understand the planet we call home.

Award-winning author Robert Burleigh tells her story of imagination and perseverance. Beautifully illustrated by Raúl Colón, Look Up! is a book that will inspire readers to follow their dreams. 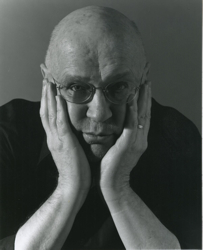 Robert Burleigh is the award-winning author of many books for children, including The Adventures of Mark Twain by Huckleberry Finn, illustrated by Barry Blitt; Night Flight, illustrated by Wendell Minor; and Black Whiteness, illustrated by Walter Lyon Krudop. His many other books include Hoops; Stealing Home; and Clang! Clang! Beep! Beep!

*"Working in a time when womenwere still unwelcome in her field, Marie Tharp maps the ocean floor andprovides convincing evidence for the previously rejected hypothesis ofcontinental drift. Burleigh's choice to write in Tharp's voice makes thedetermined geologist's story feel immediate, focusing tightly on her map thatrevealed the spreading Atlantic sea floor. He notes obstacles she overcame: aperipatetic childhood; gender discrimination; the superstition, still prevalentin 1948, that women were unlucky on ships; and disagreements about the drifttheory even with her friend and colleague Bruce Heezen. There's a shortdescription of Tharp's mapmaking process and a triumphant conclusion when thefinal, color version is published. But it's Colón's watercolor-and-pencilillustrations that bring her story alive. Readers see the map-loving child,ships taking the soundings that provided her data, the cartographer with pencilin hand, both graphing and drawing, and, in a wordless double-page spread, theexciting revelation of the rift in the middle of the Mid-Atlantic Ridge. Thedistinctive combed swirls of Colón's art masterfully suggest light on aseascape, and people are realistically depicted. Backmatter includes more ofTharp's story, useful vocabulary, bibliography and Internet links, and even"things to wonder about and do." An ideal introduction to a lesser-knownscientist and an important understanding about how the Earth works" Kirkus, starred review

Though her discoveries were pivotal to the theory of plate tectonics, geologist and cartographer Marie Tharp is still relatively unknown. In this picture-book biography, Burleigh presents Tharp’s story in her own enthusiastic, imagined voice. “Maps. I love them!” she exclaims before describing her life and accomplishments. In a conversational tone, she discusses her curiosity, her struggles to be accepted in the boys’-club atmosphere of 1950s research labs, her dogged determination to work in science, her belief in her sea-floor-mapping project, and her satisfaction at seeing her beautiful map gracing the walls of schools and museums. Along the way, she explains depth soundings, cartographic concepts, and plate tectonics. Colón’s soft colored-pencil illustrations are a wonderful match for ocean scenes and frequent maps, and a few helpful diagrams further illustrate concepts... very worthwhile. Further reading and some provocative critical-thinking questions close out the volume.

*"In this excellent biography of scientist MarieTharp, Burleigh, writing in the first person, allows this adept geologist andoceanographic cartographer to tell her own story. Map lover Tharp became one ofthe 20th-century’s most important scientists, despite working in a field thatgreatly favored men. With fellow geologist Bruce Heezen, she mapped the world’s oceans. Colón’s signature softly hued, textured watercolors greatly enhance thetext. One image depicts a research ship in the water upon which scientists tookmeasurements called soundings to chart the ocean’s depth. The writing is accessible and immediate, and though Burleigh acknowledges that Tharp was awoman working in a man’s field, he casts her story in a happy, upbeat light. Abiographical page is appended, as well as thorough back matter. VERDICTA finely told, beautifully illustrated biography that saves a world class scientist from obscurity." -- School LIbrary Journal, starred review

The duo behind Look Up!: Henrietta Leavitt, Pioneering Woman Astronomer

cartographer whose mapping of the Atlantic seafloor yielded key evidence

and her voice, as imagined by Burleigh, generally rings true. As an adolescent, she

describes her passion for maps and imagines one speaking to her: “Have an adventure.

Explore. Discover something new”—a bold challenge for a young woman

in the 1930s. Burleigh also touches on the discrimination Tharp faced. Applying

for a position as a scientist, she is informed: “We don’t need any more file clerks.”

A sexist boss won’t let her join ocean expeditions: “Having a woman on a ship is

bad luck.” (No sources are provided for these quotes.) Burleigh’s writing is clear,

conversational, and lyrical on occasion. He handles the science content well; it’s

engaged in and arguing about their work. Colón’s illustrations, a textured wash

of sea- and earth tones, are thoughtful and attractive and accurately reflect the

her shoulder at Tharp; it’s a subtle nod to Tharp’s importance as a role model, as

well as to the importance of other women scientists, past, present, and future.

a bibliography, websites (one with a slight error), and related activities.

Burleighand Colón follow 2013’s Look Up! with the story of another female scientist,Marie Tharp. Raised by a mapmaker, Tharp developed an early interest inexploring uncharted land; her passion eventually led her to the oceans.Burleigh gives readers an up-close view of Tharp’s experiences and hunchesthrough a first-person perspective: “Could the seafloor really be mapped? Ithought so—and I wanted to give it a try!” Despite discrimination she faced asa woman, Tharp became an accomplished scientist, mapping the Atlantic usingsoundings and helping advance the theory of plate tectonics. Colón’s warmwatercolor-and-pencil art brings warmth and energy to the pages through histhatched and wavelike textures, while an afterword provides further detailabout Tharp’s undertaking. Ages 4–8.

Solving the Puzzle Under the Sea