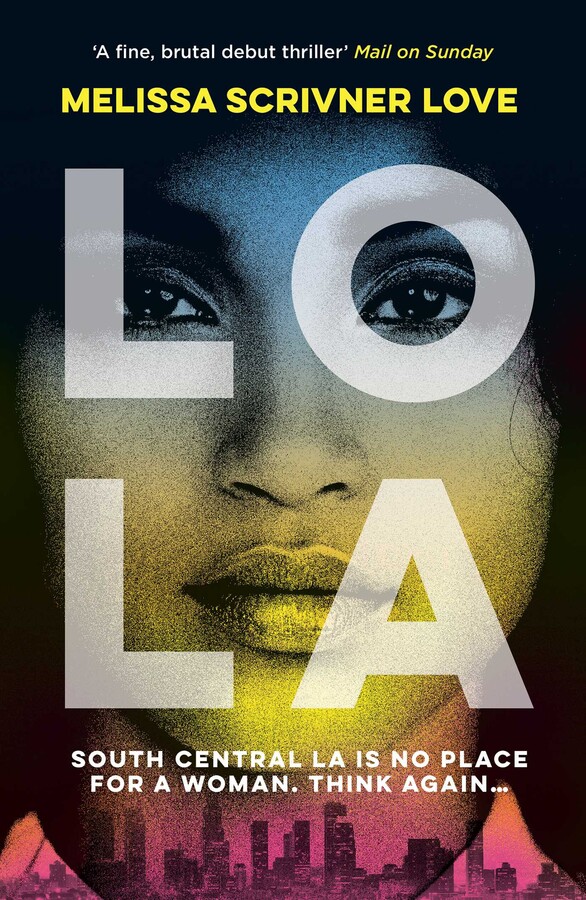 Lola stands next to Garcia while he mans the grill in their craggy square of backyard. The barbeque has just begun, and the women are clustered gossiping, while the men hold sweating beers. Lola prefers the periphery.

Business has been good lately in their tiny nugget of South Central Los Angeles, where a legit man has two choices: landscaping off-the-books for West Side white cash, or sweating through twelve-hour shifts at a factory in Vernon. Garcia does not make his living either way. If Lola were like the other women at her barbeque, she would spend her work day perched on a padded stool behind a dollar-store cash register. But Lola is not like the other women in Huntington Park.

Suddenly: a sharp knock on the front door, probably a cop. Lola goes to answer it. The man standing there is Mexican, not Mexican-American, like everybody else here. Lola searches his face for a bead of sweat but comes up empty. She has never met him, but she knows his name. Everyone in this neighbourhood knows his name. They call him The Collector, and he won’t give them long.

To read what happens next, check out the thrilling sequel American Heroin.

‘A debut as fast, flexible and poised as a chef’s knife. At its best it has the lithe energy of a Lee Child novel, combined with Dennis Lehane’s – or to step outside of the genre, Stuart Dybeck’s – sense of the exhausting intimacy of poor neighborhoods…an unshakably engrossing read… Love is vibrant and clear-eyed, an exciting new west coast observer.’

'A tough, enterprising and vulnerable heroine, Lola gives the reader an unvarnished insight into ghetto life.'

'A brilliant debut, a bleak and cynical noir set in the patriarchal gangland world of LA's South Central, with smack-dealer Lola pulling her gang's strings as she does whatever it takes to survive.'

'A gritty, tightly plotted masterpiece that doubles as a whirlwind tour of some of the many different sections and tribes of L.A.'

'Stunning... This powerful read is at once an intelligently crafted mystery, a reflection on the cycles of violence and addiction, and a timely mediation on the double standard facing women in authority.'

'Intense, gritty, and breathlessly paced, Lola is a thriller that’s been elevated by exquisite writing and deep character development.'

'A glorious invention, the Latina daughter of Lisbeth Salander and Walter White, on a lifelong tear of revenge after being pimped by her mother for drugs and then living with the double invisibility of her gender and her race.'

'I fell hard for Lola in all her fierce and broken beauty, her reckless and necessary hardness, her bottomless capacity for loyalty. Don’t miss this ride.'

– Joshilyn Jackson, New York Times bestselling author of The Opposite of Everyone

'A gritty, fast-paced thriller rife with gangland intrigue layered over a moving story of absolution.'

'One of the best written crime dramas to be published in quite some time.'

‘An absorbing tale that blends compassion and a bracing realpolitik into a fascinating account of one woman’s unquenchable will to not only survive but thrive.’

'Lola is a stunning debut. A taut, tightly written thriller with a truly original and compelling central character.’

'A superlative debut by a US author, set in the underbelly of gangland Los Angeles, with all the hallmarks of a future classic... Raw, fast-paced and compelling, a stunning portrait of a woman in charge and deadlier than the male. So much more than a tale of drugs and Cartels and patch wars, Scrivner Love's novel, like last year's award-winning Dodgers by Bill Beverly takes the clichés of crime and turns them them into storytelling gold.’

'But Scrivner Love does better than Steig Larsson by creating a female character who is not just standing up to males, she’s actually reconstructing gender for herself and her community.'

'I have never read anything like Lola, magical and microscopic in scope... An unforgettable book about a smart woman, the way her mind works, her heart too. Melissa Scrivner Love is bursting with talent and style.'

– Caroline Kepnes, author of You

‘A raw, dark and claustrophobic tale, but also a powerful and moving one. The prose is superb, the storytelling deft and the pace left me feeling a little feverish.’


– Gilly Macmillan, author of What She Knew

'With prose that's just a joy to read and a protagonist I'd welcome in my corner any time, Lola is a terrific first novel, one of the best I've come across in years.'

'The plot too, encompassing as it does this plucky little gang and its leader trying to outwit a Mexican drug cartel and various double crosses, is engaging and page-turning. All in all, this is a great read.'