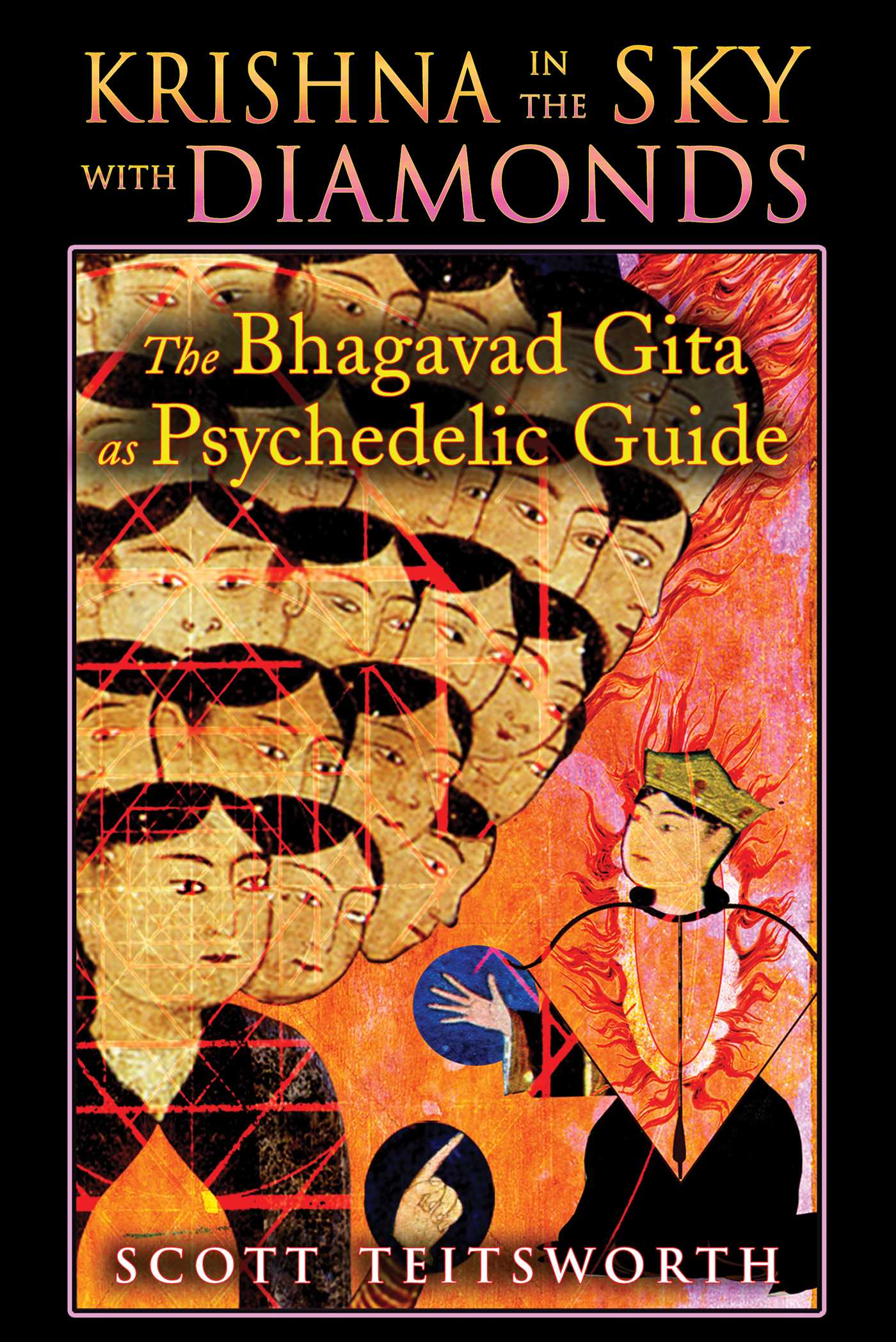 Krishna in the Sky with Diamonds

The Bhagavad Gita as Psychedelic Guide

By Scott Teitsworth
LIST PRICE £8.99
PRICE MAY VARY BY RETAILER

Known as a text of liberation and enlightenment and praised not only by Indians but also by prominent modern thinkers such as Aldous Huxley and Albert Einstein, the Bhagavad Gita is one of the most commented-upon books of all time, yet one aspect has never before been examined: Arjuna’s psychedelic soma experience with his guru Krishna.

Drawing upon his many years as a student of Nitya Chaitanya Yati, whose teacher was Gita scholar Nataraja Guru, preeminent disciple of Narayana Guru, Scott Teitsworth explains how the Bhagavad Gita, through the story of the hero Arjuna and his guru Krishna, provides complete guidelines for the spiritual use of entheogens, from prior mental preparations to the integration of profound visionary insights into everyday consciousness. Examining Chapter XI of the Bhagavad Gita verse by verse, he illuminates Arjuna’s complex revelatory experience and exposes Krishna’s role as the ultimate spiritual guide--facets of the Gita evident to anyone with psychedelic experience yet long suppressed in favor of paths to enlightenment through service or meditation. He shows that psychedelics are indeed “gateway drugs” in that they stimulate open exploration of the mind and the meaning of life. Uncovering new depths to this revered manual of spiritual instruction, Teitsworth reveals psychedelic experience to be an essential and ancient path to ignite realization in the prepared student, turn theory into direct experience, and bring the written teachings to life.

Verse 6
Behold the Adityas, the Vasus, the Rudras, the two Asvins, and also the Maruts; behold many marvels never seen before.

After the initial play of colors, a proper spiritual trip moves quickly into more cosmic realms, although visual effects may persist throughout. Here we begin to encounter demigods, who are the personification of natural principles. Decoding what the names stand for reveals that they are, among other things, stages of a psychedelic experience.

Verse 6 presents an extremely compressed outline of the early stages of a trip. There is immersion in white light (Adityas); unity with the elements of the world (Vasus); mental distress (Rudras) occasioned by the yawning gulf between the psychedelic state of mind and familiar reality; insight into truth and the meaning of life, especially of one’s own destiny (Asvins); and finally, appreciation of the divinity of all beings (symbolized by the Maruts).

Here Krishna is at last revealing to Arjuna what he only briefly described before. Earlier he taught that he was the essential core of the Adityas, the “cosmically brilliant lights” (as well as of the Vasus, Rudras, and Maruts), but now actual suns are rising in the firmament of Arjuna’s consciousness, one after the other.

The intense white or clear light of the “suns” causes all separate objects and thoughts to melt together into a state of unity. Whatever intellectual ideas about oneness were held before, now oneness is an undeniable fact, a berry in the palm of Arjuna’s hand. The certitude induced by an experience like this is overwhelming, palpable, pulverizing of all doubts.

A trip doesn’t build up to “seeing the light” gradually; there is a short period of the play of colors and then almost immediately the shining oneness bursts through. The trajectory of a good trip is like fireworks, which shoot up as rockets to explode in the sky and then slowly dissolve and settle back to earth.

In this heightened state of awareness there is additional synesthesia where the elements (Vasus) become tangible. In an exalted mind-set the yogi “becomes one” with the water of a stream or the flame of a fire, for instance: the mind is captivated so completely by what it perceives that the sense of being a detached observer is temporarily erased. It is not uncommon to even feel at one with nature in its entirety, which is a supremely uplifting sensation.

The Rudras, or “tragic storms,” can likewise appear during a trip. There is often a period of intense shake-up as the false underpinnings of one’s mental orientation are swept away in a flood of new insights. Many times a psychedelic journeyer will experience their whole body, their conceptions, their relationships to people around them, or even the entire world dissolving into nothingness. It can be a dreadfully terrifying deconstruction, but if done on the platform of a stable mind-set it allows the inner suns to shine more brightly than ever. When much of what was previously imagined about reality turns out to be false, its dissolution is a blessing in disguise. The worst pain comes from trying to hold on to ideas that are being stripped of all sense. The harder we try to cling to them, the more pain we cause ourselves. As the Buddhists advise, just let the intense energy pass through you. If you don’t resist you cannot get hurt.

The twin Asvins are offspring of the sun and considered the physicians of the gods. One is Satya, meaning truth, validity, or actuality. On a good trip the first profundity is a sense of absolute conviction. Doubt evanesces like fog before a brilliant sunrise. Ordinary states of mind can be comparatively trivial or at least partial and dubious, but the enlightened state is indelibly real through and through. It is inexplicably self-ratifying. In it, the very aliveness of reality is so uplifting and beautiful that you cannot help laughing out loud with relief and delight. Being restored to truth is possibly the most rehabilitating balm there is. The truth attained during a profound experience is not based on the recognition of specific things, which may be highly embroidered during a trip but emerges from an inner certitude grounded at a deeper level than sense perceptions.

The other Asvin is Dasra, which means accomplishing wonderful deeds or giving marvelous aid. Further into a trip saturated in truth, there is often a period of insight about the meaning of one’s life, including impediments and unrealized potentials. Many of the life transforming effects of soma ingestion happen at this stage.

It is little wonder that these two demigods are considered “physicians,” because they heal many deep-seated wounds of the psyche instantly and almost painlessly. Knowing who you are and where you are going has to be the most important insight anyone can have for finding their way through life.

The Maruts are the shining ones, the divine sparks. After the instructive phase of the trip, the yogi can see how every separate item of the universe glows with its own inner radiance, its own inimitable value. The new awareness gained is applied to each aspect of the environment in turn, and each becomes exalted, transformed from darkness to light, from stagnation to vivacity.

All these marvels are “never seen before” because they spring from the unique mind of each viewer. There are no Rudras and the other demigods anywhere in the “real” world; they stand for aspects of consciousness. While what they represent may occur in a generally similar way in most people, their precise display will be tailored to each person’s individual makeup.

The bliss of the Absolute has often been described as ever-new joy. It can never become stale or redundant, because it is never the same. As in surfing, each wave breaks but once, and no matter how similar it is to past waves, it must be ridden wholly in the present or the surfer will wipe out.
Scott Teitsworth

Scott Teitsworth is a lifelong student of Indian philosophy and modern science under the tutelage of Nitya Chaitanya Yati, himself a disciple of Nataraja Guru. An editor of books written by these gurus, he and his wife host the Portland branch of the Narayana Gurukula, where they have taught classes on the Bhagavad Gita and Indian philosophy since the 1970s. He lives in Portland, Oregon.

“The Bhagavad Gita is a classical spiritual text, but whoever would have imagined that it could serve as a guide to psychedelic experience? Krishna in the Sky with Diamonds is a tribute to the insight and creativity of its author, Scott Teitsworth, a longtime scholar of Indian philosophy. Teitsworth takes his readers on a tour of Vedic teachings, one that avoids simplification. But the challenge is worth it; with or without the use of mind-altering substances, an immersion in this work cannot help but open the door to that intangible goal known as enlightenment.”

“This book is a fresh appraisal of The Song of God. Teitsworth bravely ventures into the as yet terra incognita: science of consciousness. Unlike Carlos Castaneda, there is no question of the authenticity of Teitsworth’s scholarship. Speaking from my own experiences, the psychedelic experience should always be done with care and guidance. There is no better place to start for guidance in this exploration than Krishna in the Sky with Diamonds.”

“...the book becomes invaluable to entheogenicists whose tastes are tempered by Vedantic and Hindu schema.”

“The whimsically titled Krishna in the Sky With Diamonds takes an essential and much-welcomed place among books measuring the psychedelic experience against Eastern religion and spirituality, such as Allan Hunt Badiner and Alex Grey's fine compilation Zig Zag Zen and the Leary et al. classic, The Psychedelic Experience. And the ancient poetry of the Gita is still spectacular!”

Krishna in the Sky with Diamonds

The Bhagavad Gita as Psychedelic Guide

By Scott Teitsworth
LIST PRICE £8.99
PRICE MAY VARY BY RETAILER