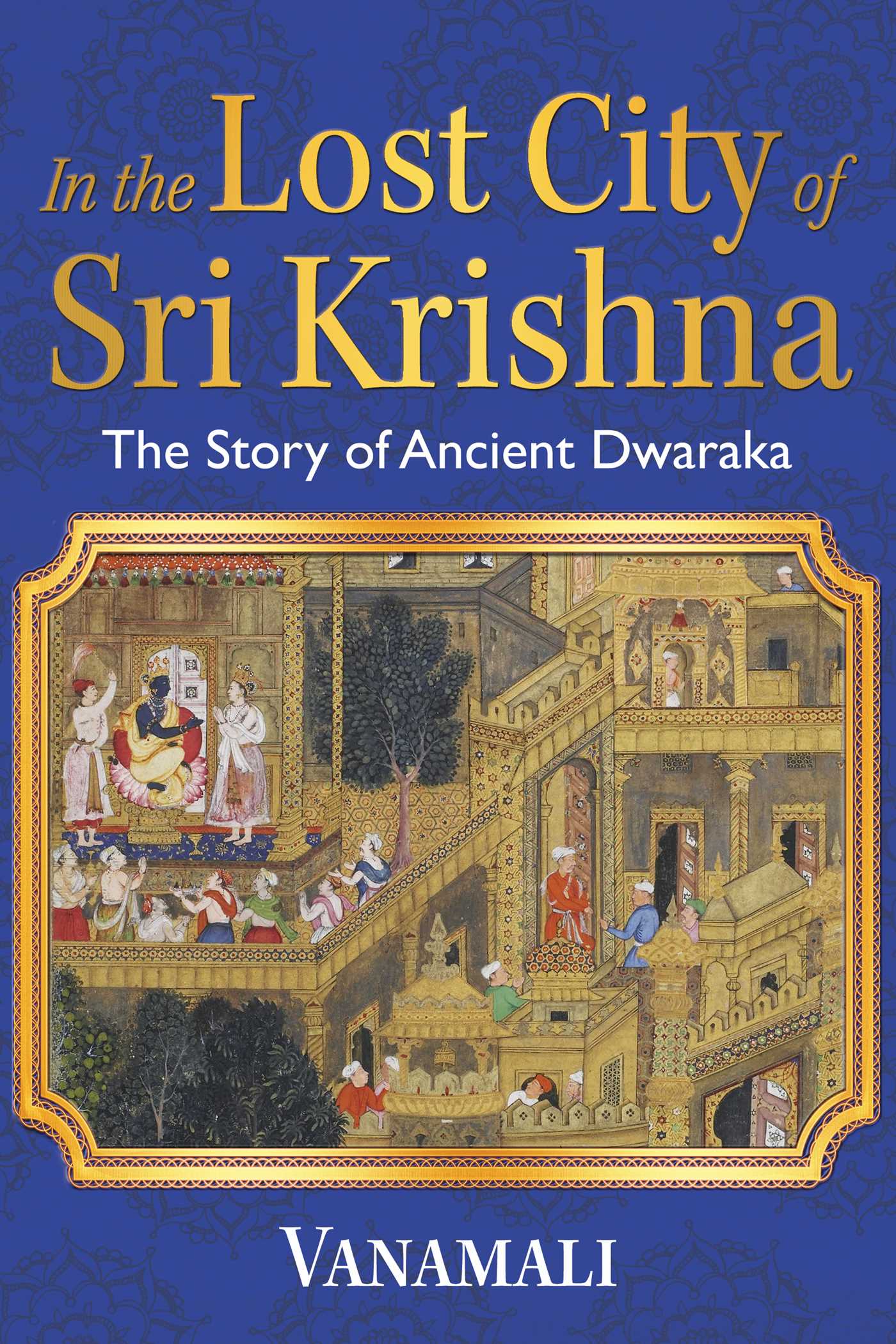 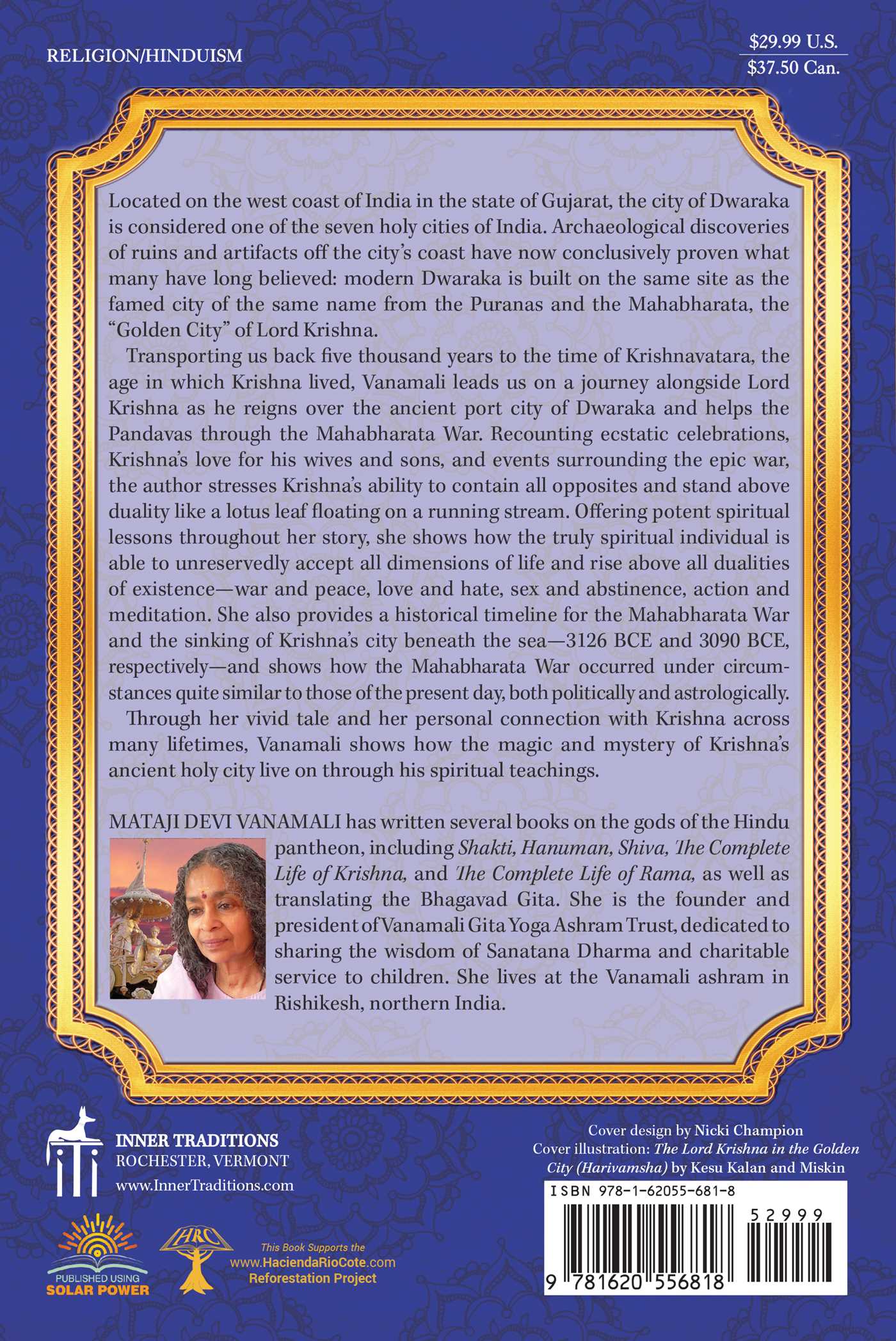 In the Lost City of Sri Krishna

The Story of Ancient Dwaraka

By Vanamali
LIST PRICE £25.00
PRICE MAY VARY BY RETAILER

A vivid journey back to the time of Krishna, his holy city, and the Mahabharata War

Transporting us back five thousand years to the time of Krishnavatara, the age in which Krishna lived, Vanamali leads us on a journey alongside Lord Krishna as he reigns over the ancient port city of Dwaraka and helps the Pandavas through the Mahabharata War. Recounting ecstatic celebrations, Krishna’s love for his wives and sons, and events surrounding the epic war, the author stresses Krishna’s ability to contain all opposites and stand above duality like a lotus leaf floating on a running stream. Offering potent spiritual lessons throughout her story, she shows how the truly spiritual individual is able to unreservedly accept all dimensions of life and rise above all dualities of existence, war and peace, love and hate, sex and abstinence, action and meditation. She also provides a historical timeline for the Mahabharata War and the sinking of Krishna’s city beneath the sea--3126 BCE and 3090 BCE, respectively--and shows how the Mahabharata War occurred under circumstances quite similar to those of the present day, both politically and astrologically.

Through her vivid tale and her personal connection with Krishna across many lifetimes, Vanamali shows how the magic and mystery of Krishna’s ancient holy city live on through his spiritual teachings.
Chapter 29

Winter rains had swept the field. Kurukshetra was wet and slushy when the Great War commenced on the eleventh day of the bright fortnight, when the star Krittika was in ascendency in the month of Margashirsha (November-December). The great message of my Lord to Arjuna, which later came to be known as the Bhagavad Gita, was given on the morn of the first day of battle.

Both armies were in battle formation when Arjuna leaned forward and spoke to my Lord, “O Madhusudana! Please drive our chariot forward and place it in the middle of the ranks so that I can observe our opponents once again before the start of the war.”

Obedient to his role as a charioteer, Krishna, the Lord of the universe, drove the chariot to the no-man’s land between the two armies and stopped it exactly in front of Bhishma and Drona. I figured that he did this with a definite purpose. By placing it in such a strategic position, he brought out a great revulsion in the heart of his friend Arjuna that had been bottled up for some time. It was only when Arjuna faced his beloved grandsire and revered guru that the full impact of the terrible destruction that was to take place hit him like a blow in the solar plexus.

His whole body trembled with the shock, his mind reeled, his mighty bow fell from his nerveless grasp, and he collapsed in a heap on the floor of the chariot.

“O Madhava!” Arjuna said, “War is a terrible thing and war between relations is even worse. They are not my enemies who are standing on the opposite side, but my relations--my grandfather, who dandled me on his knee, my guru without whom I would not be standing here today. I would rather that they killed me than kill them and gain a victory. Let us turn back, O Krishna! I cannot fight this war. I am totally confused as to my duty. I surrender to you. Pray advise me.”

“O Arjuna! First of all you must understand who you are. You are not the body, you are not the mind, and you are not the intellect. You are that immortal, eternal atman, which never being born, can never die! You think you are the killer and they are the killed. Let me tell you that you can neither kill nor be killed. It is their karma that has brought them to this field and if their karma is to die here, they will die with or without you. At best you can only be an instrument in bringing about their end. But remember, even then you can only destroy their bodies and never the eternal spirit residing in them. What is there to grieve in this? Even considering your duty, it is certain that you should fight, since it is the duty of a Kshatriya to fight a righteous war. You have a duty to your citizens to rescue them from the tyranny of this evil king.

Krishna then spoke to Arjuna about action. “O Partha! We live in an active world and everyone is forced to do karma or action. It is said that it is karma that binds us to the wheel of samsara. How can we get out of this dilemma? The only way is to transform ordinary karma into a practice that will take us toward our goal of liberation. The binding aspect of karma is that it isalways done with a selfish motive. The secret of action is that every action should be done as a yajna or offering to God. In this way we can avoid the binding effect of action.

“Therefore, Arjuna, it is your duty to fight this righteous war that has been forced on you, without worrying about victory or defeat. You must only put forth your best and leave the results to God, who will decide what your just deserts are.”

Arjuna had not been present when my Lord showed his cosmic form at the assembly of the Kurus, so now he begged him to show it to him. I realized how much my Lord loved him--for he was ready to show him this form that could not be seen by ordinary eyes, so he gave him divine eyesight. He showed a totally different aspect from what he had shown at the Kuru court. He showed his form as Kaalaswarupa, the figure of all-consuming Time, in which the Kaurava host was being consumed by the huge gaping mouth of the Lord of Time. Everyone was being crunched by the huge canines of this terrible figure. Neither I nor Arjuna could bear to look at this gigantic figure of destruction.

“Pray show me your original form,” Arjuna shouted and so did I pray to be shown his beauteous form as my Lord Krishna.

Krishna immediately stood before us again as my beloved Krishna. Both of us gave a sigh of relief and prostrated to him.

Krishna looked tenderly at Arjuna and said, “O Partha! What is there to forgive? You and I are one. We have never been separated. I have been your friend in all the lives you have ever taken. In this life I have chosen to reveal myself to you. You are my chosen instrument for fighting the canker that is eating into this society. Just do your duty to the best of your ability.That is all I ask of you. Be a perfect instrument in my hands and I will see to it that you will be led to the final consummation of life.”

Once more Arjuna regained his original look of anticipation and readiness and told my Lord, “Let us drive back, O Keshava! I am ready to obey your commands!” I realize that when the individual soul and the supreme spirit stand united, nothing and no one can defeat them.
Vanamali

“Vanamali transports the reader to Lord Krishna’s heavenly kingdom of Dwaraka. Her devotion invites the reader to make a leap in consciousness and to join her on an ecstatic pilgrimage to the heart of Mother India’s legendary wisdom.”

“In the Lost City of Sri Krishna is an enthralling journey from India’s leading female mystic. Vanamali’s intricate accounts of higher Vedic civilizations and culture will entertain and satisfy not only students of yoga but all those interested in the secrets of India, which only adept mystics can reveal.”

– Nischala Cryer, author of The Four Stages of Yoga and cofounder of Ananda University

“This inspired book by Vanamali not only brings to life the events at the time when Sri Krishna ruled over Dwaraka but also imparts profound wisdom and uplifts spiritually. It lovingly connects us to one of the main pillars of India’s great tradition, Sri Krishna.”

“Which of us has not imagined ourself as a character in His great play? In In the Lost City of Sri Krishna the author envisions herself as a direct witness to Lord Krishna’s sojourn in Dwaraka. In doing so she masterfully transports the reader into that time, giving each of us a personal glimpse of what it may have been like to walk beside Him.”

"Using data from archeological and astronomical studies as well as maritime explorations, Vanamali builds a strong case that Lord Krishna and his life-narrative are not simply a part of Indian mythology, but they constitute an indisputable part of India's rich and varied history. Bravo."

In the Lost City of Sri Krishna

The Story of Ancient Dwaraka

By Vanamali
LIST PRICE £25.00
PRICE MAY VARY BY RETAILER