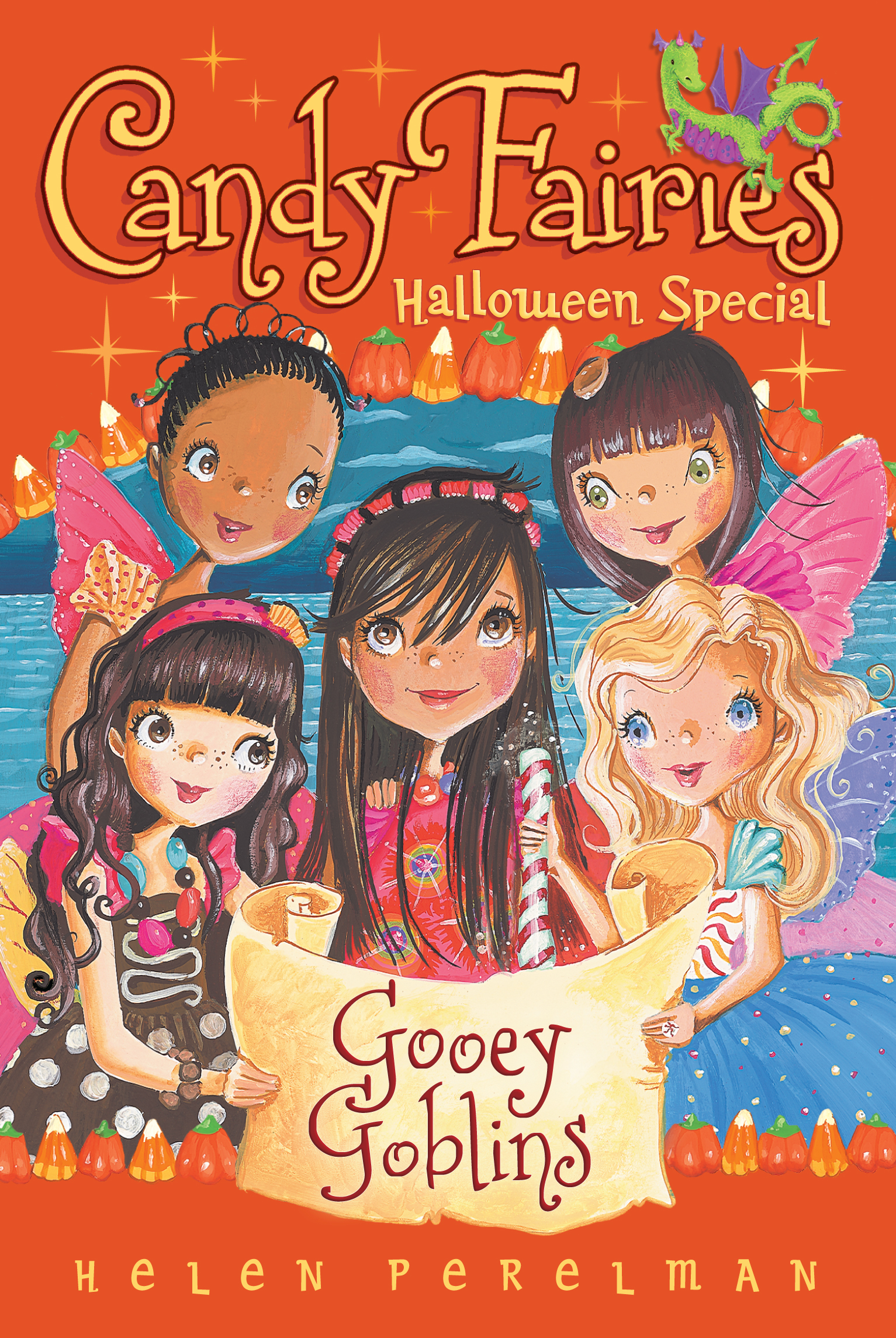 A delicious confection for candy and fairy lovers -- welcome to the Sugar Valley, home to the Candy Fairies, where every fairy represents a special candy treat!

A Candy Fairies super special with twice as much delicious fun. The five fairy friends are sent on a quest to discover why all the gummy trees are melting in the Sugar Valley. Is a goblin haunting the Gummy Forest? Each fairy will need to use her unique abilities to discover what is souring the forest. Turns out, it's a sad, lonely young dragon named Carobee. When the girls help him spin his fire into cotton candy, peace is restored to the kingdom.

Cocoa the Chocolate Fairy, Melli the Caramel Fairy, and Berry the Fruit Fairy soared over Chocolate River. A cool autumn breeze ruffled their wings, but they stayed their course. Nothing was going to stop them from heading to the far end of Gummy Forest.

“You are right on time,” Dash said as she flew alongside her friends. She looked at Berry and smiled. “This must be important. You are never on time!”

Berry shot Dash a sour look. “The sugar fly said Raina’s message was urgent. I can be on time when I need to be!”

“And yet she still had time to put on her best sugar-jewel necklace,” Cocoa added with a sly grin.

“Just because I was rushing doesn’t mean I have to look sloppy,” Berry replied. Berry always liked to look her best and was usually sporting a new piece of jewelry that she had made herself from sparkling sugarcoated fruit chews.

“What do you think this is all about?” Melli asked. She was worried about her friend Raina the Gummy Fairy. Usually Raina didn’t overreact to situations. She was very calm and always followed the rules.

“Maybe she just couldn’t find something in the Fairy Code Book and needs our help,” Cocoa joked.

“No, there’s definitely something strange blowing around the valley,” Dash said. She looked back at her friends. “And no, it’s not just the cold autumn wind,” she added.

Melli had to agree with Dash. “This is the busiest time in Sugar Valley, and we shouldn’t be distracted from our work. Candy Corn Fields is already full of tall stalks.”

The four fairies flew in silence for a moment. Then they saw the tops of the gummy trees.

“We just saw her yesterday,” Berry told her. “Don’t be so dramatic. I’m sure she’s fine.”

Cocoa flew ahead, and then called back over her shoulder, “I don’t think it’s Raina we need to be concerned about.” She pointed to the south end of the forest. “Look at those trees!”

The four friends gasped as they saw the melted leaves of the gummy trees. Normally, the branches were filled with bright rainbow gummy fruits.

“No wonder she called us,” Berry whispered.

The fairies flew deeper into the forest. There were puddles everywhere from the melted gummy candies.

“I never thought I would say this,” Dash said, “but Gummy Forest is a melted mess!” She flew over a rainbow puddle. Even though Dash was the smallest of all the Candy Fairies, she was always hungry and was the most adventurous eater. If the melted gummies didn’t appeal even to Dash, the fairies knew things were really bad.

“Sweet sugar!” Raina shouted when she saw her friends. “I’m so glad you got here!”

“Oh, Raina,” Melli called, rushing down to give her friend a hug. “What happened here?”

“I’m not really sure,” Raina said, her voice full of concern. “When I woke up this morning, the forest looked . . . melted!”

Cocoa, Berry, and Dash landed beside her. Their faces told Raina all she needed to know.

“It still looks awful here, doesn’t it?” the Gummy Fairy asked. “The poor forest animals don’t know what to make of all this. I tried my best to take away some of the melted candies and clean up some of the puddles, but that doesn’t seem to be making a difference. The forest is still a mess.”

“Are you okay?” Cocoa asked. She put her arm around Raina.

Raina sat down on a melted log on the ground. “I’m fine,” she said with a heavy sigh. “I’ve been doing all sorts of research. And nothing seems to match up. All I know is that the forest animals and gummy candies are all in danger.”

“It’s definitely eerie, not cheery, here,” Berry mumbled. “Are you sure this isn’t some kind of spooky trick by Mogu?”

Raina shook her head. “I don’t think so. This is really bad. Even for a tricky troll.”

“I wouldn’t put anything past Mogu,” Cocoa said. “That old salty troll is sour.”

“Yes,” Raina agreed, “but Mogu loves gummy candy. I can’t see him wanting to ruin it.”

The fairies all knew that Mogu lived in Black Licorice Swamp and that he and his Chuchies often came to swipe candy from Gummy Forest. The troll and his round little workers loved candy too much to spoil the crops.

Berry looked closely at the melted trees. “I think you’re right. These candies are ruined . . . even for a troll to eat.”

“I told you something was going on,” Dash mumbled.

Standing with her hands on her hips, Berry shook her head. “You’re not saying what I think you’re saying, are you?” She smiled at Dash. “You’ve been reading too many Caramel Moon stories.”

“Most of those stories are based on truth,” Dash said. She loved to read all the spooky tales that fairies had spun about the full moon in the tenth month of the year. “Those aren’t just ghost stories.” Dash looked over at Melli and Raina. “Tell them!”

“Well, some of those stories are just meant to entertain,” Raina said. “But others are based on true occurrences.”

Dash gloated for a minute, but then a melted candy snapped off its vine and fell on her head. She rubbed her forehead and looked to Raina. “What do you think this is all about?”

“The gummy flowers over by Chocolate River did look melted,” Cocoa told Raina.

Dash’s silver wings flapped nervously as she spoke. “Last night I heard howling and moaning in Peppermint Grove,” she whispered.

“Something isn’t right in Sugar Valley,” Melli muttered. “Oh, and there’s so much to do! Think of all the fall candy crops that could be ruined.”

“Let’s not get our wings dipped in syrup yet,” Berry told her friends. “We can get to the bottom of this.”

A sugar fly appeared and dropped a note for Raina. She read the letter quickly and then showed her friends. “The note is from Candy Castle. Princess Lolli is calling a meeting of all the fairies. We are supposed to go to the Royal Gardens at Candy Castle now.”

Melli gasped, and her hand flew up to her mouth.

“If Princess Lolli is calling us to the castle, the situation has to be sour!” Dash exclaimed.

“Not necessarily,” Cocoa said, trying to keep her friends calm. But in her heart she wasn’t so sure. Princess Lolli was the kind and gentle ruler of all of Sugar Valley. She didn’t often call a meeting of all the fairies—unless something was very urgent.

The fairies flew off to Candy Castle hoping that all would soon be right in Sugar Valley.

Helen Perelman has worked in a children’s bookstore and was a children’s book editor. She now writes full-time in New York, where she lives with her husband and two daughters. Visit her online at HelenPerelman.com.

Erica-Jane Waters is the author and illustrator of many books for children. She graduated from Hereford College of Art & Design in the UK. She creates art for magazines and greeting cards and also designs toys. Erica lives with her husband in in Northamptonshire, UK.