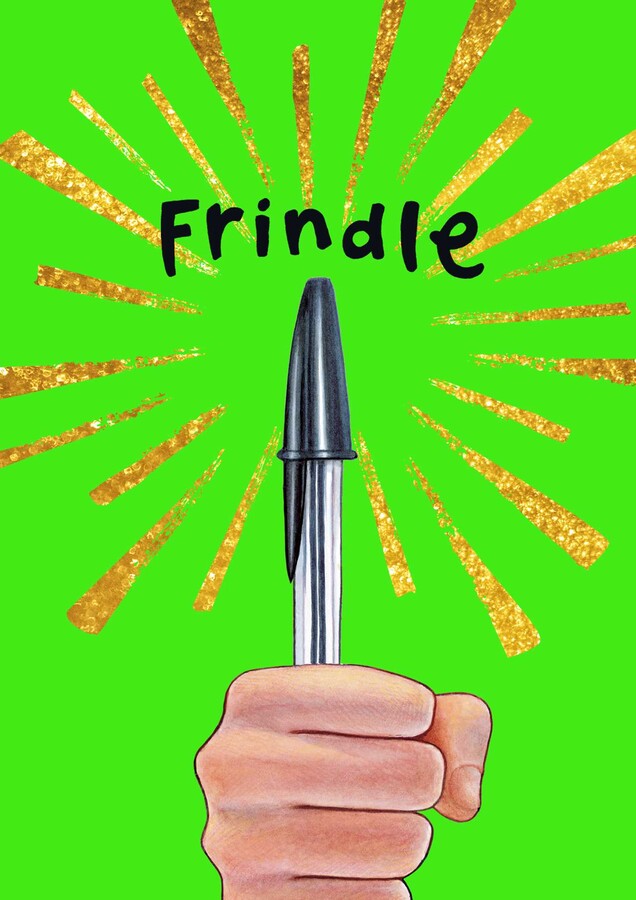 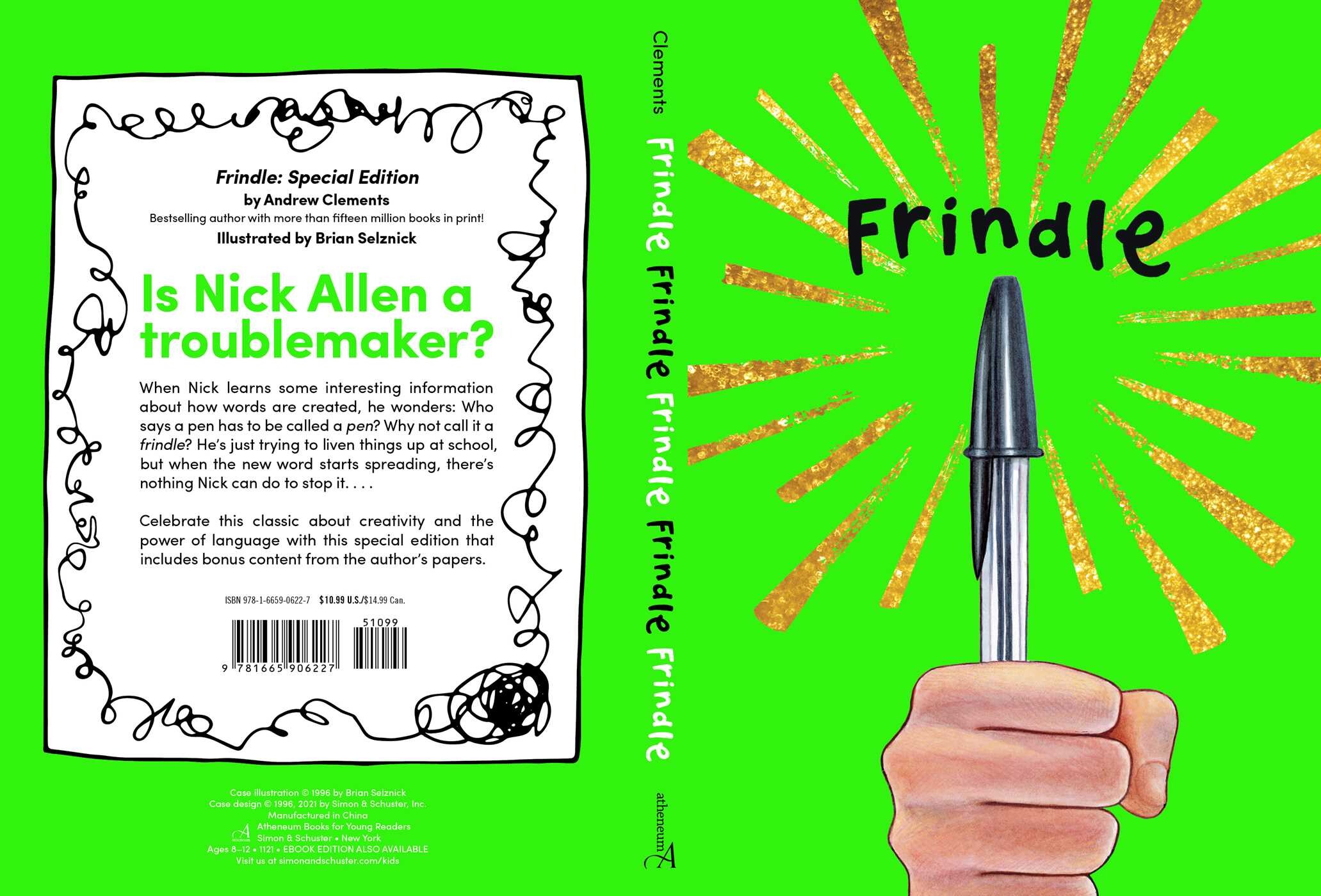 From bestselling and award-winning author Andrew Clements, a quirky, imaginative tale about creative thought and the power of language that will have readers inventing their own words—now available in a deluxe paperback edition!

Is Nick Allen a troublemaker? He really just likes to liven things up at school--and he's always had plenty of great ideas. When Nick learns some interesting information about how words are created, suddenly he’s got the inspiration for his best plan ever...the frindle. Who says a pen has to be called a pen? Why not call it a frindle?

Things begin innocently enough as Nick gets his friends to use the new word. Then other people in town start saying frindle. Soon the school is in an uproar, and Nick has become a local hero. His teacher wants Nick to put an end to all this nonsense, but the funny thing is frindle doesn’t belong to Nick anymore. The new word is spreading across the country, and there’s nothing Nick can do to stop it.

By clicking 'Sign me up' I confirm that I'd like to receive updates, special offers, including partner offers, and other information from Simon & Schuster Inc. and the Simon & Schuster family of companies. I understand I can change my preference through my account settings or unsubscribe directly from any marketing communications at any time. We will send you an email with instructions on how to redeem your free ebook, and associated terms.
Discussion Topics
Describing his novel, Andrew Clements writes that Frindle "is about discovering the true nature of words, language, thought, community, learning." Take each of these ideas one at a time. How is each explored in Frindle? What do you think is the true nature of each?
The frindle is just one of Nick's great ideas. Brainstorm about ways you could improve your own school. How can you turn your ideas into action?
"Every good story," Mrs. Granger writes to Nick, "needs a bad guy, don't you think?" Do you agree? Does every good story have a villain? Can you think of any that don't?
Brian Selznick's illustrations add their own sly humor to Frindle. Discuss a few of your favorites in detail. For example, how does his first illustration, opposite the title page, help set up the novel? How do you know from his fullpage portrait of Mrs. Granger that she can't be pushed around?
Although Nick didn't know it until he turned twenty-one, his new word earned him a huge amount of money. Do you think his parents were right in setting up a trust fund for him? What do you think he might have done with the money if he could have spent it earlier? What would you do if you suddenly had a lot of money of your own?
"School," the author writes in Frindle, "was the perfect place to launch a new word." Why? What makes schools such good breeding grounds for fads? Do companies or community organizations ever use your school for promoting products or services? How?
Years after he leaves Mrs. Granger's class, Nick finds a perfect way to show her how important she was to him. What's your teacher's idea of a perfect gift from a former student? Has he or she received it yet?
Activities and Research
Create and define your own new word. Think of an object, a situation, or behavior that you think needs a single new word all its own.
When Nick decides to call a pen a frindle, he creates a new synonym for a word that has few. But many words, such as friend or attractive, already have several common synonyms. On your own or with a group, make a list of words with many synonyms. What's the largest number of synonyms you can come up with for one single word?
New inventions and ideas or changing cultural influences continually add new words to our language. With the help of your parents or another adult, assemble a list of new words or new meanings for old words that have entered common usage within the last generation. Ask them as well about common words from their own childhood that are now seldom used.
Nick makes his mark on the world even though he's just a fifth grader. Research and report to your class on other individuals who made significant contributions to literature, science, music, or other fields while still very young. If possible, bring in examples of their work.
Interview a parent or a close adult friend about the teacher who meant the most to them when they were young. Did they always admire that teacher or did they grow to respect him or her more over time? What did they learn from that teacher? How did they learn it? Have they kept up with the teacher since leaving school?
Mrs. Granger is a firm believer in improving vocabulary by studying word lists, but there are also playful ways to boost your word power. Look for board games based on words, crossword puzzles, or any books that feature word games. And, of course, reading more good books is another sure way to increase your vocabulary.
News about Nick's new word spreads fast. First within his class, then in his hometown newspaper, later on television news shows and entertainment talk shows. Track a current news story through the media. Where did you first learn about the story? Keep a record of all the media outlets -- newspapers, magazines, the Internet, radio and television newscasts, or entertainment shows -- that also feature the same story.

Andrew Clements (1949–2019) was the author of the enormously popular Frindle. More than 10 million copies of his books have been sold, and he was nominated for a multitude of state awards, including a Christopher Award and an Edgar Award. His popular works include About Average, Troublemaker, Extra Credit, Lost and Found, No Talking, Room One, Lunch Money, and more. He was also the author of the Benjamin Pratt & the Keepers of the School series. Find out more at AndrewClements.com.

Brian Selznick is the author and illustrator of the bestselling The Invention of Hugo Cabret, which was awarded the Caldecott Medal and was a National Book Award finalist. He is also the illustrator of many books for children, including Frindle and Lunch Money by Andrew Clements, as well as the Doll People trilogy by Ann M. Martin and Laura Godwin, and The Dinosaurs of Waterhouse Hawkins by Barbara Kerley, which was a Caldecott Honor Book. Mr. Selznick divides his time between Brooklyn, New York, and San Diego, California.

“Frindle is a phenomenon with over 8 million copies sold, and just one of dozens of beloved books that Andrew Clements published with Atheneum. With this 25th anniversary edition with a special cover treatment and bonus material from Clements’s files, we celebrate his legacy, and we hope the book will inspire a new generation of Frindle fans to start making up their own words.”

"Will have readers smiling all the way through...hilarious."

"If there's any justice in the world, Clements may have something of a classic on his hands. . . . A captivating tale--one to press upon children, and one they'll be passing among themselves."