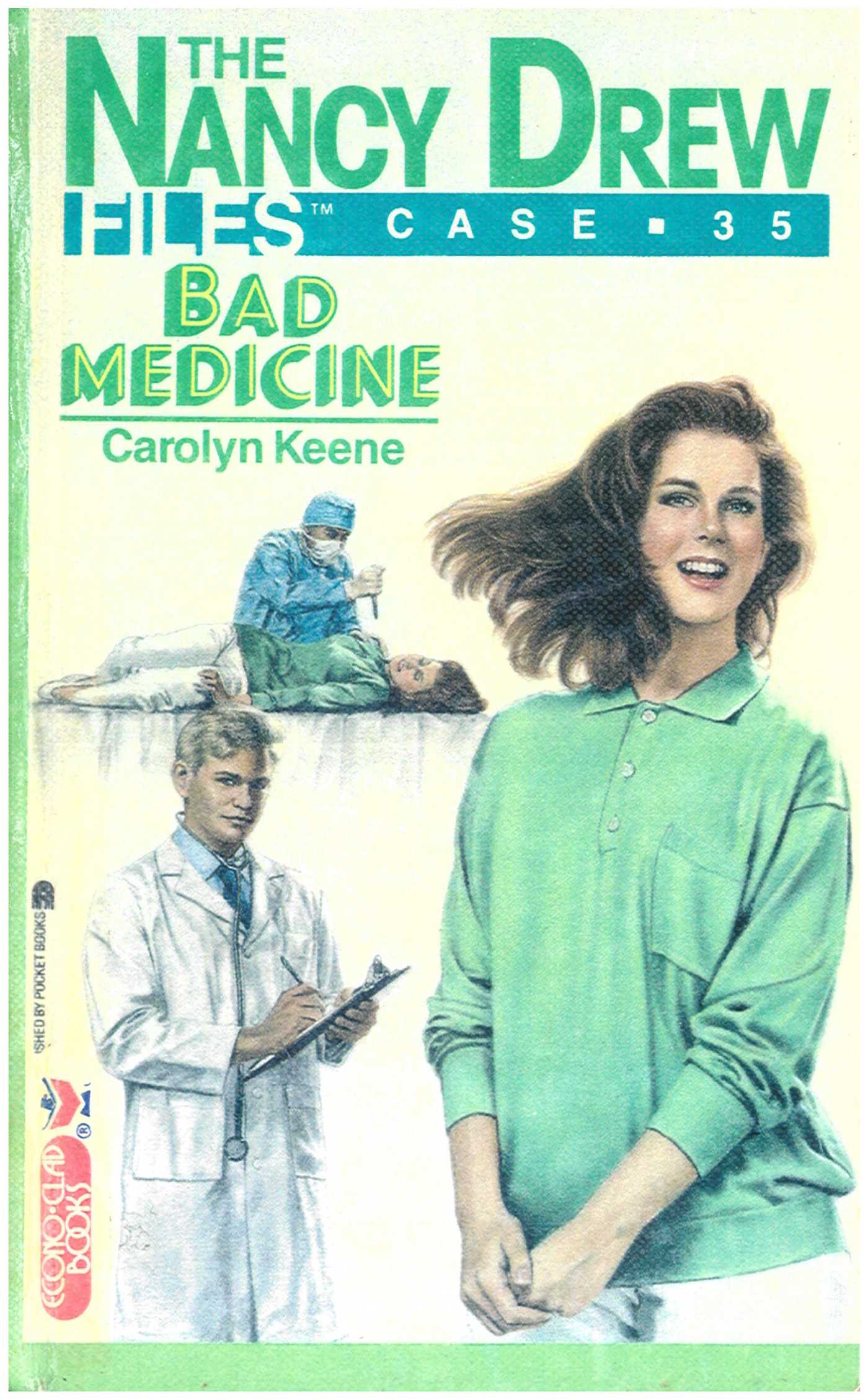 Ned’s friend Trevor is a promising young doctor, but his patients keep disappearing. As Nancy unravels the mystery, the bodysnatcher stalks her. Could this be Nancy’s final operation?

One
THE MAD DOCTOR bent over the young reddish-blond-haired girl strapped to his table. His scalpel glinted dangerously in the harsh glow from the overhead lights in the operating room. “You’ll bother me no more!” he said with an evil cackle.

He lifted his hand high above her chest, ready to plunge the knife in.

Bess Marvin covered her eyes. “I can’t look! Tell me when it’s over!”

Nancy Drew glanced up from the television screen, amused by her friend’s terrified look. “Don’t worry. The hero’s about to come and save her.”

“Why can’t she save herself?” asked George Fayne, Bess’s cousin and one of Nancy’s best friends.

“Because she’s trapped with a maniac!” declared Bess, flipping her blond hair behind her ears.

At that moment the movie’s hero threw open the door to the operating room and wrestled the doctor for the scalpel. The scalpel clattered to the floor, and the villainous doctor staggered toward the door. The heroine’s eyes fluttered open.

George jumped up from the couch and snapped the television set off, disgusted. “I can’t stand a wimpy heroine.”

“Me, neither.” Nancy stretched and yawned. “I thought this movie would be better.”

The three friends were seated in the Drews’ den, eating popcorn and spending a quiet Saturday night at home.

“Since when are you interested in medical thrillers?” Bess asked as Nancy rewound the videotape.

“Since Ned decided to enroll in a week-long seminar at Westmoor University Medical School,” Nancy answered. Ned Nickerson was Nancy’s steady boyfriend and a student at Emerson College. “All next week he’ll be right here in River Heights, at the med school. He’s going to be studying hospital administration.”

“Hospital administration, huh?” George said. “Will he have any time off?”

“I don’t know, but I hope so. I’m seeing him tomorrow night before the seminar starts, but I think he’ll be pretty busy after that. His friend Trevor Callahan is a second-year resident at the school and hospital here, and I know Ned wants to spend time with him.” Nancy hit the eject button, and the tape popped out of the machine.

“You haven’t,” Nancy admitted. “Actually, neither have I. Trevor’s family has lived down the block from the Nickersons for a while, but Trevor’s older than Ned and he’s been off at medical school for years.”

“He’s a second-year resident? What exactly does that mean?” George asked, reaching for another handful of popcorn. “Is he still a student?”

“Well, yes—in a sense. But Trevor’s a real doctor, too. He finished medical school, and now he’s doing his residency.”

“Well, Trevor won’t take up all Ned’s spare time, will he?” Bess asked. She pulled on her denim jacket. “You should still have some time for fun.”

Nancy walked Bess and George to the door, then locked up the house and climbed into bed, folding her arms under her head. She was eager for Sunday to come and for Ned to start his seminar.

“Trevor or no Trevor, you’re going to spend some time with me, Ned Nickerson,” Nancy said, staring up at the dark ceiling with a smile on her face.

“Are you sure you want to get involved in hospital administration?” Nancy asked Ned as she pulled against her seat belt to look out the windshield.

She was peering through the early-evening shadows, trying to get a good look at the prestigious medical school. The hospital, a huge gray stone building, stood in the forefront of the campus. A smaller building flanked it on the south. The dorms were clustered around the parking lot, and farther back, across a grassy parkway, stood an older ivy-covered brick building.

“Not exactly,” Ned admitted, pulling into a parking spot near one of the dorms. It was four stories high, and a covered walkway extended from the front door to the parking lot. “That’s why I’m attending this seminar—to see if I like the business end of running a hospital.”

Nancy sent him a sidelong look. Ned was rugged and good-looking with an easy smile and an athletic build. She couldn’t imagine anyone else being her steady boyfriend. She was thrilled to see him and spend time with him. “You know, I’ve always wondered what it would be like to work in a hospital.”

“Very funny. I was thinking more about Doctor Drew.”

Grinning, Ned said, “Well, you’re about to meet Doctor Callahan. Trevor said he and April, his fiancée, would meet us in front of this building. Then we’re all going to dinner.”

Nancy knew very little about Trevor except what Ned had told her. She knew he was specializing in cardiology, hoping to be a heart surgeon soon.

They waited in the car, but twenty minutes after they were supposed to meet, there was no sign of either Trevor or his fiancée. Eventually an attractive girl with blunt-cut shoulder-length brown hair pushed through the front doors of the dorm. She wore a blue dress, and what looked like a lab coat was tucked under one arm. She hesitated on the brightly lit stairs, peering through the covered walkway.

“Do you think that could be April?” Nancy asked.

“There’s one way to find out.” Ned climbed out of the car and called, “Are you April Shaw?”

April hurried toward Ned. “Trevor’s going to be late. His shift was changed today, and he won’t be off until after seven. I’m sorry. He tried to call but couldn’t reach you.”

Nancy opened her door and walked around the front of the car to meet April, who looked about twenty-three or -four. Though the evening was warm, her arms were wrapped around her waist, as if she felt cold. She kept glancing over her shoulder at the hospital building.

“This is my girlfriend, Nancy Drew,” Ned said, introducing them.

April smiled faintly. “I’m in my third year of medical school. I won’t be a full-fledged doctor until I’m finished, but we address one another as doctor as soon as we’re admitted to medical school.” She threw another look at the imposing gray building.

“Do you want to go to the hospital?” Nancy asked.

“Am I that obvious? Yes, I guess I do.” She shook her head apologetically. “You see, Trevor’s over there now checking on my father. He came to visit me last week, but three days ago he had a heart attack. Now he’s a patient here, and I’m really worried about him.”

They walked along a curving sidewalk to the hospital’s main entrance. “My father is a doctor, too,” April went on. She seemed anxious to air her problems. “Dr. Gerard Shaw. When I got accepted to med school here, he was the happiest man in the world. But then he got sick.” She sighed heavily. “I didn’t really want him to visit me. I was afraid the trip would be too much for him.”

“You mean you thought he might have a heart attack?”

“He does have a heart condition,” April admitted.

The hospital’s main lobby was decorated in cool tones of gray and white. Several sofas were grouped around a rectangular glass table, and several magazines were fanned across the table’s glossy surface. The reception hub took up the center of the room. Two women sat behind it, one greeting visitors and the other working the switchboard.

“Trevor’s on seven—the cardiology floor,” April explained as they stopped by the group of sofas. “He promised to check on my father. I won’t bother him now; the doctors in CCU want him to rest.”

“Cardiac Care Unit. The cardiac nurses staff it around the clock. I’m hoping my dad’ll be well enough to be moved to a private room soon.”

Nancy glanced at Ned. She didn’t see how they could leave the hospital and go out to dinner. April was too upset. “Maybe we could eat in the hospital cafeteria,” Nancy suggested out loud.

Ned grimaced. “Hospital food?” he repeated, clutching his throat as if he might gag. “How about going somewhere else? Anywhere else!”

“April might want to stay at the hospital,” Nancy pointed out, nudging him in the ribs.

“No, that’s okay,” April insisted. “As soon as Trevor’s through, I’d like to get away. I’ve been sick with worry all day.” She looked at the clock on the far wall. “Do you mind waiting?”

“Now, what’s that all about?” April muttered. “Nobody calls stat unless it’s very serious. Come on,” she added abruptly. “We’ll meet Trevor on seven.”

Nancy and Ned exchanged glances. They didn’t want to get in the way of an emergency. But April had already ushered them to an elevator.

“The room’s in the west wing,” April said as they stepped off the elevator into a gleaming corridor.

Intent on his task, Trevor disappeared into the room. Nancy stood by the open door. Inside the room, someone was gasping wildly. Alarmed, Nancy caught a clear glimpse of a middle-aged woman lying in bed, her face swollen and contorted, her fingers clutching at her throat.

But instead of helping her, Trevor just stood at the foot of the hospital bed, staring. Nancy was horrified. He was going to let her die!
Carolyn Keene