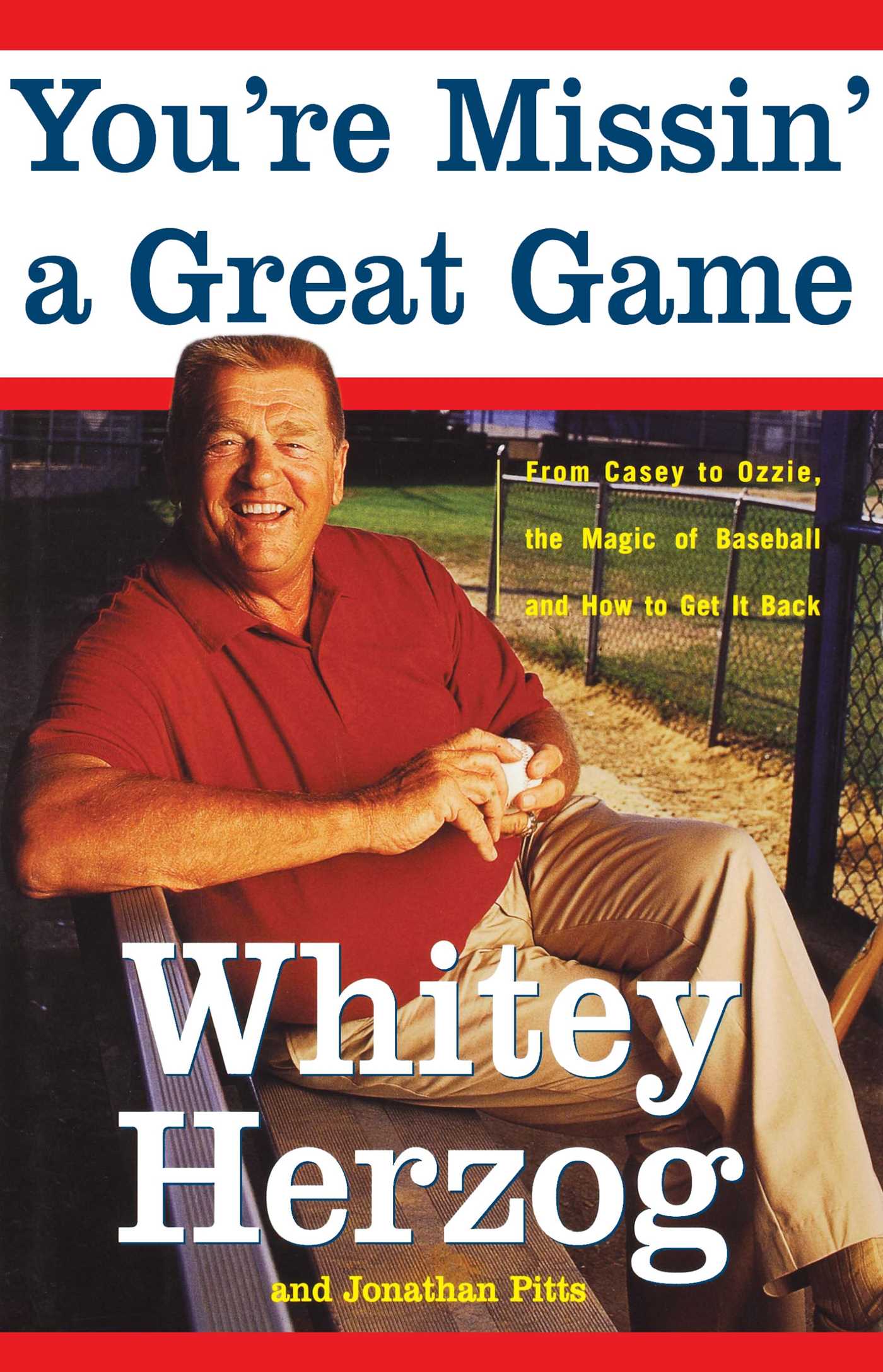 You're Missin' a Great Game

From Casey to Ozzie, the Magic of Baseball and How to Get It Back

By Whitey Herzog and Jonathan Pitts
LIST PRICE £14.99
PRICE MAY VARY BY RETAILER

At its best, baseball calls on a wide array of subtle skills, rewarding the teams that know how to play the game better than their opponents over the long 162-game season. Whitey Herzog learned those skills under the tutelage of Cesey Stengel in the Yankees' training camps of the 1950s: how to take a lead; which side of the cutoff man to aim for; when to take an extra base depending on whether the outfielder throws left-handed or right-handed; the best ways to turn or prevent a double play. These little things might make a difference in two or three games over the course of a season, but two or three wins are often what separates a pennant winner from the pack. As Whitey would personally learn playing alongside greats like Roger Maris and Yogi Berra -- and managing players like George Brett, Darrell Porter, and Ozzie Smith -- baseball should reward such attention to detail. That inside knowledge can create the chance for a less physically awesome team to beat its imposing adversaries -- and what is more satisfying in sports than David toppling Goliath through skill and guile?
But in the modern game, Herzog argues, players don't learn these skills, and the game no longer rewards them if they do. Expanded playoffs mean that more teams reach the postseason, so excellence over 162 games is less important than ever before. Players know that their agents will negotiate salaries based on their home runs, batting averages, and RBI counts; why learn the parts of the game that don't show up in the box scores? The richest teams can bash their way into the playoffs by signing the players they need to play a power game at bat and on the mound. The free-agent draft deemphasizes good scouting, and the bonuses being paid to untested rookies further widen the gap between rich and poor. For the majority of teams, the season is over before it's begun; their economic circumstances won't let them play the only style you can win with today.
But it would be wrong to lump Herzog in with the crowd that says things can never be as good as they used to be. Outrageous, thought-provoking, candid, and laugh-out-loud funny, You're Missin' a Great Game celebrates the game of baseball as it was, and as it can be again. For all the fans revitalized by the excitement and glamour of the home-run chase and the barrier-breaking '98 season, Whitey Herzog shows how -- with some intelligent planning and attention to the virtues of the game -- baseball's best days can and should be still ahead of us.

You're Missin' a Great Game

From Casey to Ozzie, the Magic of Baseball and How to Get It Back

By Whitey Herzog and Jonathan Pitts
LIST PRICE £14.99
PRICE MAY VARY BY RETAILER