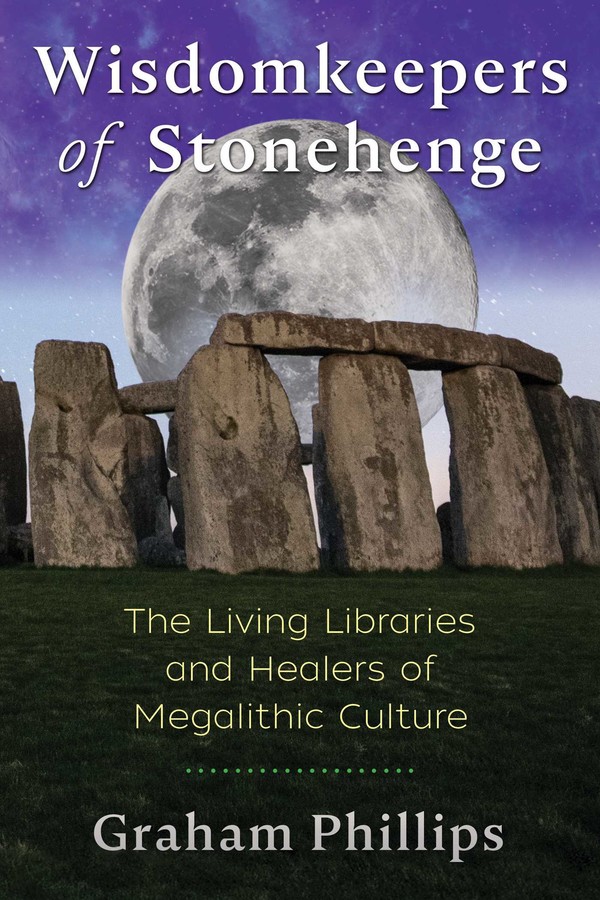 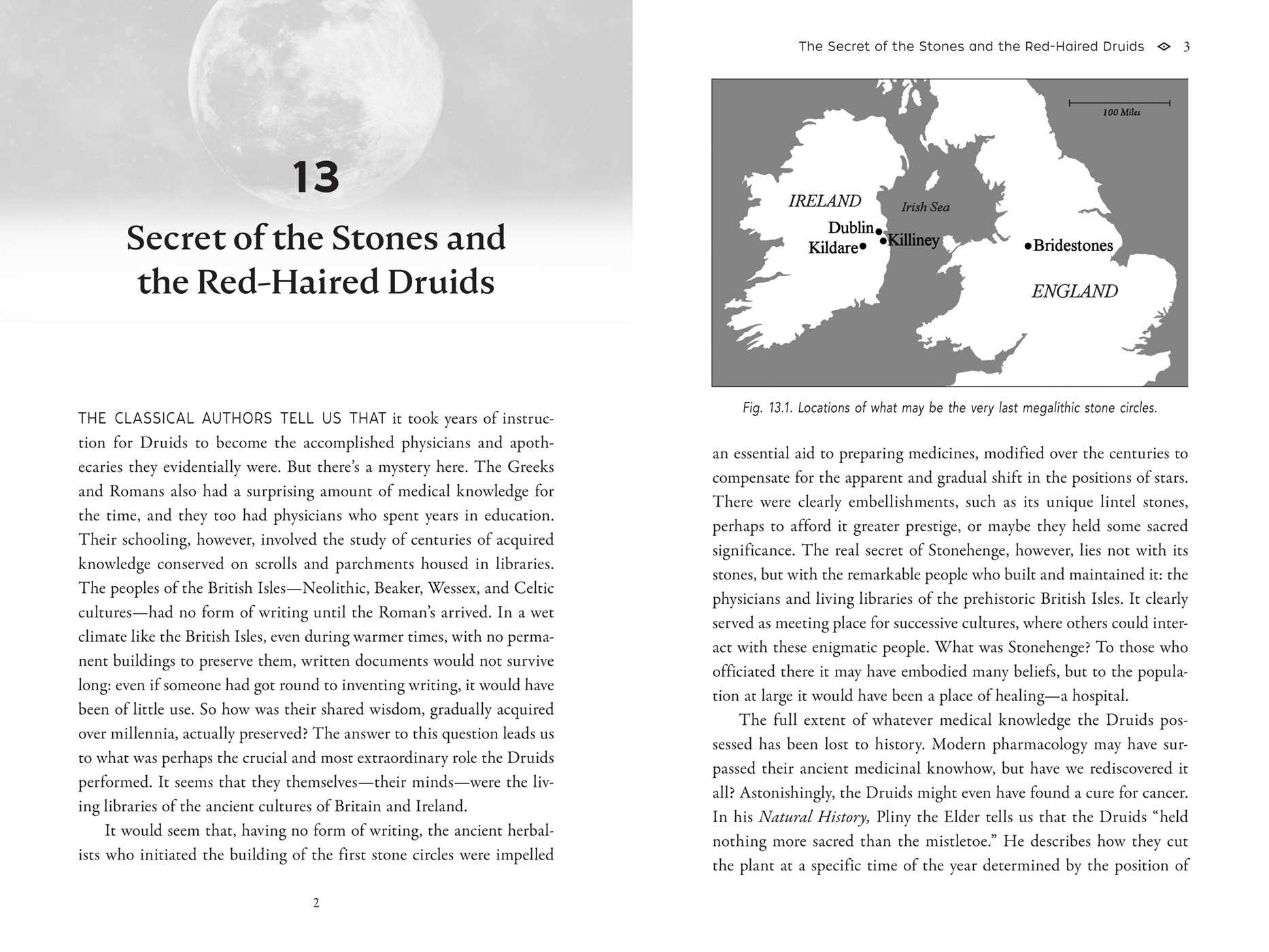 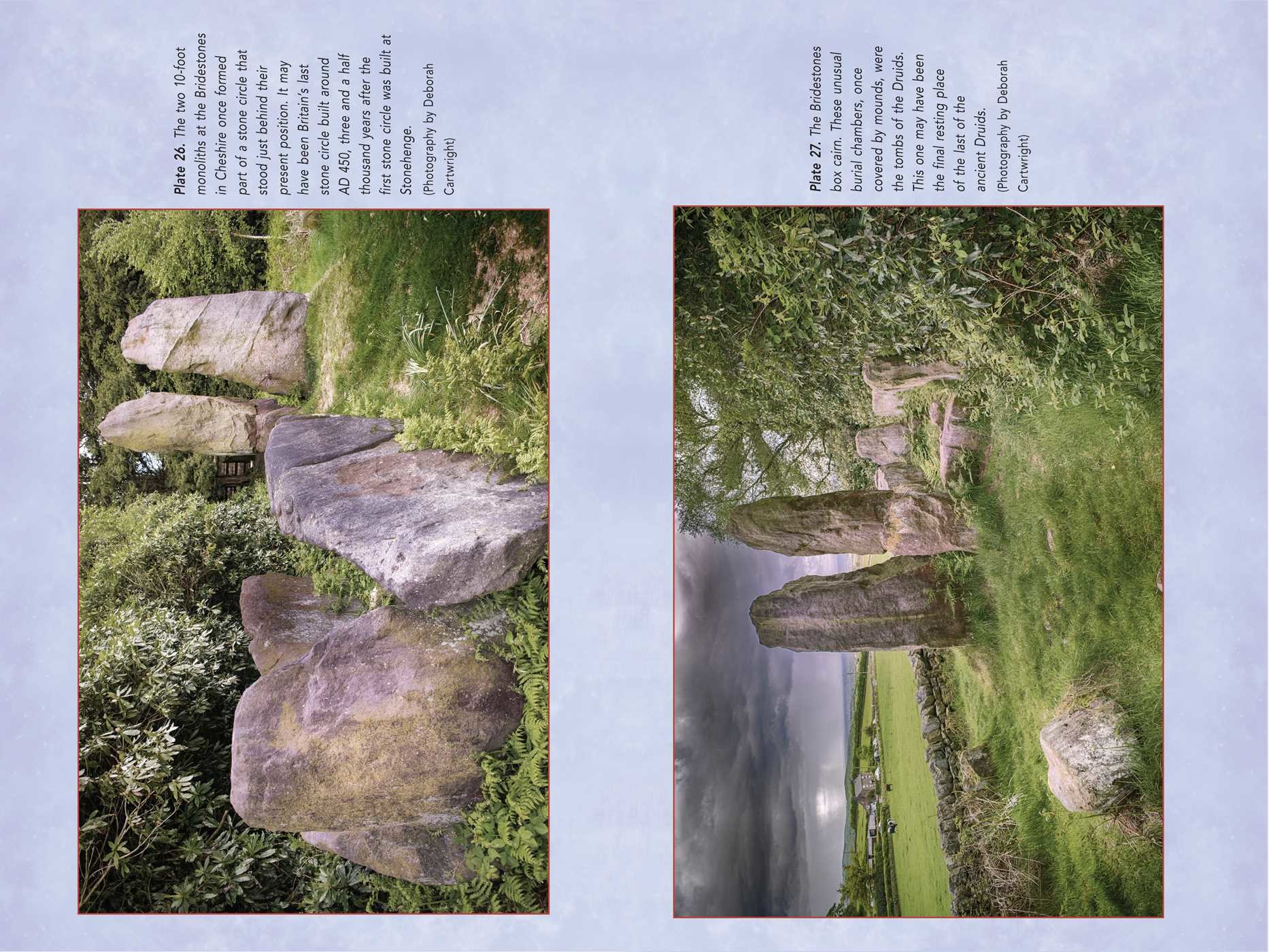 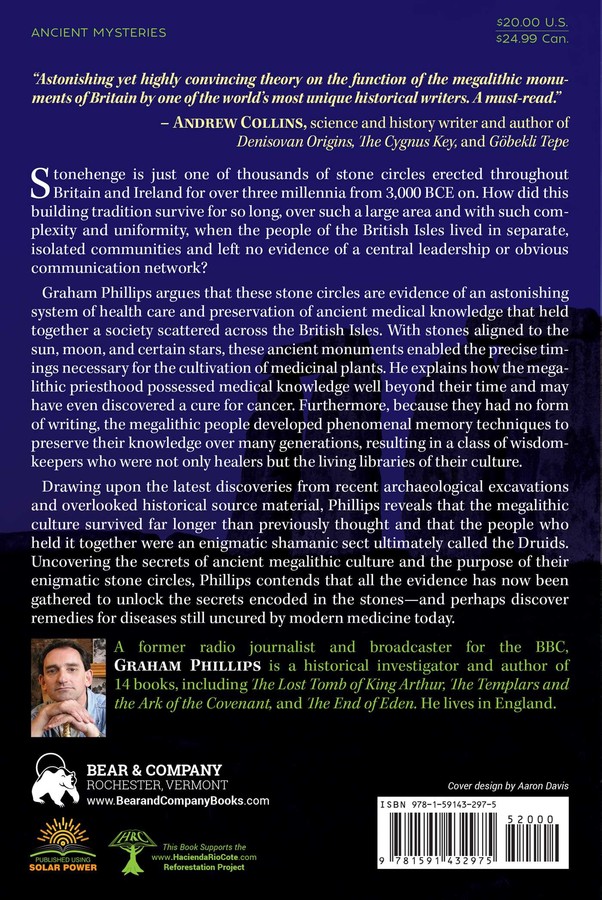 The Living Libraries and Healers of Megalithic Culture

By Graham Phillips
LIST PRICE £16.99
PRICE MAY VARY BY RETAILER

Stonehenge is just one of thousands of stone circles erected throughout Britain and Ireland for over three millennia from 3,000 BC on. How did this building tradition survive for so long, over such a large area and with such complexity and uniformity, when the people of the British Isles lived in separate, isolated communities and left no evidence of a central leadership or obvious communication network?

Graham Phillips argues that these stone circles are evidence of an astonishing system of healthcare and preservation of ancient medical knowledge that held together a society scattered across the British Isles. With stones aligned to the sun, moon, and certain stars, these ancient monuments enabled the precise timings necessary for the cultivation of medicinal plants. He explains how the megalithic priesthood possessed medical knowledge well beyond their time and may even have discovered a cure for cancer. Furthermore, because they had no form of writing, the megalithic people developed phenomenal memory techniques to preserve their knowledge over many generations, resulting in a class of wisdomkeepers that were not only healers but the living libraries of their culture.

Drawing upon the latest discoveries from recent archaeological excavations and overlooked historical source material, Phillips reveals that the megalithic culture survived far longer than previously thought and that the people who held it together were an enigmatic shamanic sect ultimately called the Druids. Uncovering the secrets of ancient megalithic culture and the purpose of their enigmatic stone circles, Phillips contends that all the evidence has now been gathered to unlock the secrets encoded in the stones--and perhaps discover remedies for diseases still uncured by modern medicine today.
Chapter 12. Astronomy and Medicine

Perhaps by understanding the Druids we can finally discover the true purpose of stone circles. For over three millennia these megalithic monuments continued to be used, despite successive waves of migrants settling throughout the British Isles: the Beaker people, the Wessex culture, and the Urnfield and Hallstatt Celts. By the time the first written records appeared concerning Britain, and later Ireland, those who officiated at whatever practices took place at stone circles were called Druids, and, from the assorted evidence examined in the last two chapters, they appear to have been an elite caste descended from a distinguished class amongst the Neolithic residents of the British Isles.

Hippolytus of Rome likened the Druids to the contemporary Brahmins of India: a priestly caste only permitted to procreate with one another (see chapter 11). But there was one big difference between these two sects from opposite sides of the known world. The Brahmins were the Hindu elite amongst a Hindu population, whereas in the British Isles the Druids seem to have held markedly different religious views to the rest of society. According to Julius Caesar, the Celts worshiped a variety of gods, the chief of which he equates with the Roman Mercury, the guider of souls to the underworld. The Druids, on the other hand, venerated a different god which Caesar likens to Apollo, a solar deity who was additionally the god of prophesy and healing. Diodorus Siculus also implies that their god was similar to Apollo. When referring to the circular temple that seems to have been Stonehenge (see chapter 9), he tells us that it was sacred to this sun god and that the priesthood who gathered there were devotees of this deity.

The Druids, it seems, maintained independent religious concepts to those of the general population of the British Isles and, judging by their funerary customs, they--or by whatever name they were originally known--had done so right from the time the first wave of migrants, the Beaker people, had arrived. They were not only tolerated by newcomers, they were respected, venerated, and held in the highest esteem; even accepted as a kind of judiciary. This all seems a most unlikely scenario--comparable, perhaps, to Catholics, Protestants, and Muslims all revering an autonomous Jewish elite--unless, that is, the Druids served an invaluable function for the wider society which was of a practical rather than a religious nature. So, were the Druids really the priesthood of the Celts? Or were they something else, perhaps more akin to an academic or learned institution of some kind, “living libraries” with wisdom, knowledge, and skills deemed essential to everyday life?

Early Irish literature is full of accounts of Druids predicting such matters as military defeats and victories, calamities or achievements, and plentiful or disastrous harvests. The Greek and Roman writers also refer to this role. Diodorus Siculus describes the Druids as diviners and foretellers of impending events, and Hippolytus of Rome tells us, much to his distaste, that “the Celts esteem these [Druids] as prophets and seers.” He goes on to explain that their predictions were based on certain mathematical calculations, which the Roman writer Lucan additionally reveals were related to the movement of heavenly bodies. However, you wouldn’t actually need a stone circle to perform astrology.

There was, however, another role the Druids performed that must have been of far greater significance than their function as astrologers, and one which might indeed have necessitated the use of stone circles as stellar observatories: that of healers. We have already seen how early Irish literature portrays healing as the prerogative of the Druids, and how archaeology has indicated that these people were indeed physicians. Discoveries of what were clearly surgical instruments found in Druid tombs, such as the Stanway site, show an astonishing degree of medical knowledge (see chapter 11). Saws for amputations, scalpels for surgery, various types of forceps for removing foreign objects from the body and to aid in childbirth, pliers for tooth extractions, slender needles for stitching wounds, and many more. The kind of tombs in which these Druids were buried and such instruments found were not an Iron Age innovation, but had been constructed for centuries before the Celts arrived in the British Isles: the unusual box tombs.

Box tombs nearly always contain plants that are toxic, foul tasting, or virtually inedible under normal circumstances. Most of them even lack narcotic effects that might have been used as recreational drugs or to induce visions. Their only conceivable uses, it seems, would have been medicinal. And the box tombs that uniquely contained such materials appear to have been those used exclusively for the interment of Druids and their elite caste of predecessors. Many of the plant extracts found in these box tombs are highly toxic and, for them to perform their curative functions, they not only needed to be prepared according to a precise and careful formula, but required being harvested at a very specific time. The chemical continuants of live vegetation alter consistently depending on their annual cycle, and sometimes even depending on the time of day or night. You would need to know exactly when to cut, pick, or extract the necessary components. It would have taken a great deal of training to become a prehistoric physician; to learn all the plants, their uses, cultivation methods, and times of harvesting. Creating these herbal remedies would have been an extremely complex and exact procedure, and, remarkably, the cultivation and harvesting of vegetation for medicinal purposes may actually explain why stone circles were built.
Graham Phillips

Graham Phillips is the author of The End of Eden, The Templars and the Ark of the Covenant, Atlantis and the Ten Plagues of Egypt, The Chalice of Magdalene, and The Moses Legacy. He lives in the Midlands of England.

“Astonishing yet highly convincing theory on the function of the megalithic monuments of Britain by one of the world’s most unique historical writers. Graham Phillips explains how our Neolithic and Bronze Age ancestors possessed an acute knowledge of medicine and healing practices, using the stone circles to enhance the cultivation of plant life. A must-read for everyone interested in the lost technologies of our ancient past.”

– Andrew Collins, science and history writer and author of Denisovan Origins, The Cygnus Key, and G

“Imagine if Egypt’s Great Pyramid stood alone in the desert without any remaining evidence of the civilization that built it. This is the enigma of the magnificent stone circles of the British Isles. These ancient wonders are found from the extreme north on Scotland’s Orkney Islands to Stonehenge in the south. Graham Phillips’s deep research for his compelling Wisdomkeepers of Stonehenge pulls together all the pieces of one of humanity’s most fascinating archaeological puzzles.”

– Rand Flem-Ath, coauthor of The Murder of Moses and Atlantis beneath the Ice

“Graham Phillips has always been noted for his meticulous historical research, depth of vision, and ability to follow the threads of a mystery throughout history.”

"There is a highly impressive amount of detailed information and research that went into this book and it has a series of beautiful color photographs of these ancient and incredible sites that will take your breath away and have you wanting to start planning for a trip to the British Isles."

"I highly recommend Wisdomkeepers of Stonehenge for anyone who enjoys a delicious ancient mystery. The wisdom offered in this book can turn the ancient curse of living in interesting times from a curse to a blessing--for we may be the first generation in millennia to read the true messages encoded in the sacred stone circle of Stonehenge."

The Living Libraries and Healers of Megalithic Culture

By Graham Phillips
LIST PRICE £16.99
PRICE MAY VARY BY RETAILER