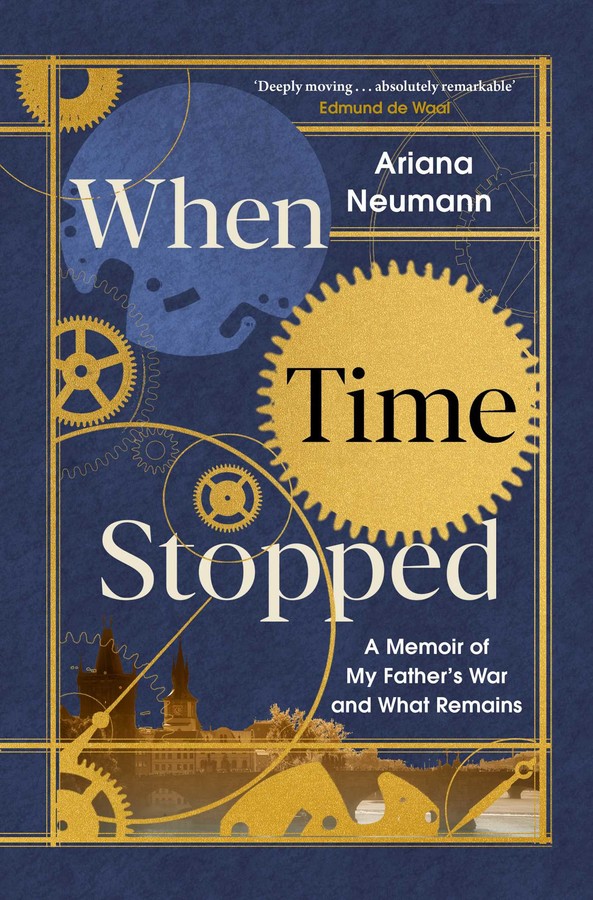 A Memoir of My Father's War and What Remains

By Ariana Neumann
LIST PRICE £16.99
PRICE MAY VARY BY RETAILER

In this remarkably moving memoir, Ariana Neumann dives into the secrets of her father’s past: years spent hiding in plain sight in wartorn Berlin, the annihilation of dozens of family members in the Holocaust, and the courageous choice to build anew.

‘The darkest shadow is beneath the candle.’

As a child in Venezuela, Ariana Neumann is fascinated by the enigma of her father, who appears to be the epitome of success and strength, but who wakes at night screaming in a language she doesn’t recognise. Then, one day, she finds an old identity document bearing his picture – but someone else’s name.

From a box of papers her father leaves for her when he dies, Ariana meticulously uncovers the extraordinary truth of his escape from Nazi-occupied Prague. She follows him across Europe and reveals his astonishing choice to assume a fake identity and live out the war undercover, spying for the Allies in Berlin – deep in the ‘darkest shadow’. Having known nothing of her father’s past, not even that he was Jewish, Ariana’s detective work also leads to the shocking discovery that a total of twenty-five members of the Neumann family were murdered by the Nazis.

Spanning nearly ninety years and crossing oceans, When Time Stopped is a powerful and beautifully wrought memoir in which Ariana comes to know the family that has been lost – and, ultimately, her own beloved father.

‘When Time Stopped is a beautifully told story of personal discovery, of almost unimaginable human bravery and sacrifice, and a harrowing portrait of living, dying and surviving under the yoke of Nazism.’

‘When Time Stopped is Ariana Neumann’s journey of discovery, lyrically set down in this truly exceptional book.  She shines an intimate light upon a time unique in its horror, and tells a story of bravery, and rare survival. Yet the events she describes happened more than two decades before she was born. To a man to whom she was very close, but whose secrets she was only able to pursue after his death - thanks to the one hoard of evidence he never destroyed. This is a work of very great talent.’

The story Neumann uncovers is worthy of fiction with hairpin plot twists, daredevil acts of love and unexpected moments of humor in dark times. Given the slew of colorful characters and dramatic details, she could have turned her painstaking research into a historical novel. Instead she has written a superb family memoir that unfolds its poignant power on multiple levels. Yes, her account of one Jewish-Czech family’s race to outwit the Nazis makes for thrilling reading. But just as important is her lucid investigation of the nature of memory, identity and remembrance.

‘Ariana Neumann’s story may strike a chord, and rightly so. The slow and pitiless brutality that took hold of much of Europe in the 1930s is a story that can never be told too often. What makes this account so effective is that it’s personal and, because of the dogged extensiveness of her research, Neumann reminds us of the small details that make the Nazi persecution of the Jews all the more chilling.

It’s not always a grim story. Alongside anger and despair there is love and hope. But the message is stark. This is the way bullies work. When Time Stopped is more than just history. It’s a warning.’

‘When Time Stopped is a remarkable and beautifully written book. Hans Neumann's story is astonishing, confirming that when it comes to the Holocaust we should expect only the unexpected. This is one of the most powerful and profoundly moving family stories of the Holocaust to have been published in many years and a must read.’

‘When Time Stopped is an astonishing family memoir that will imprint itself on your psyche as only the best books can, forever changing the way you look at your own family.  With a mastery of the dogged art of research rarely seen, and with an exquisite narrative sensibility to match, Ariana Neumann has breached the hidden surface of her family’s tumultuous past and brought not only their tragedies and sorrows, but also their joys and loves, to indelible light.  I will carry the experience of this book with me for a very long time.’

– John Burnham Schwartz, author of The Red Daughter, Reservation Road and The Commoner

‘In a grand house in Caracas in the 1970s, a young girl comes of age dreaming of becoming a detective and solving mysteries, particularly the mystery of her charismatic, enigmatic father. Four decades later, after he dies, and herself a mother, she embarks on an extraordinary journey through Central Europe and South America to uncover her father's past. Through pre-war Prague's intelligentsia to the rise of fascism in Europe to the horror of Hitler's camps, she combines a daughter's love with a profound yearning for truth.  The result is a love letter to a father who, out of sheer will and determination, did not allow the Nazis to destroy him - and who rose to become one of Venezuela's most successful industrialists.  Part literary memoir, part mystery tale, Ariana Neumann's tribute to her father is a classic story of redemption and love.’

– Janine di Giovanni, 2019 Guggenheim Fellow and author of The Morning They Came for Us: Dispatches from Syria

‘This book is utterly riveting: Ms. Neumann's memoir reads like a detective novel, as she unravels her late father's complex, agonizing yet inspiring trajectory. Conjuring the lives of her relatives murdered in the Holocaust, she brings their lost world to vivid life.’

‘I’ve read countless memoirs. I’ve read hundreds of books about the Holocaust and mysteries and detective stories and rigorously researched tomes of history and psychological studies of the effects of trauma. But never in my reading life have I ever come across anything akin to this magical, brilliant and gripping work of art combining all of these elements into a lyrical tapestry of one woman’s quest to understand her father’s mysterious past and therefore her own. To call this moving is an understatement. It is a journey of untold grace, sorrow and love.’

– Deborah Copaken, bestselling author of Shutterbabe: Adventures in Love and War and The Red Book

‘Growing up in a comfortable Caracas home, surrounded by joy, gaiety and the ‘birds of paradise’ -- and a father so revered that he had streets named after him in Venezuela -- Ariana Neumann willed an adventure to come her way. But nothing could have prepared her for the true-life story which was to unfold upon her beloved father’s death, back into the darkest depths of human history.

Lucidly-written, this is a gripping, heart-wrenching journey back to wartime Prague and Berlin. Ariana Neumann has written the book that her remarkable father simply couldn’t.’

– Georgia Hunter, New York Times bestselling author of We Were the Lucky Ones

‘Ariana Neumann's beautiful, meticulously researched memoir is an extraordinarily moving story of a family’s lost history, a father’s well-kept secret, and a daughter who pieces it all together with courage, tenacity, and most of all, love.’

‘Neumann’s efforts to tell [her father] Hans’s story chronologically, rather than in the order she unravelled the mystery, is especially effective. At times the revelations are so extraordinary to modern eyes that the memoir has an almost fictional feel.’

‘… to unearth such stories takes great determination, patience and sensitivity, not least because so many of those who survived did so by suppressing the truth.  ‘Sometimes you have to leave the past where it is – in the past,’ Hans told his daughter.  But he didn’t entirely let it go, and nor, on his and our behalf, did she.’

‘Compelling … brilliant …This remarkable, beautifully written book is full of sadness but it also full of great beauty and joy.’

– Daily Mail, Book of the Week

‘[When Time Stopped is] a treasure to be savored as testament of the human will to survive.’

‘Full of tales of courage … this meticulously researched work is unforgettable.’

‘This book will be an important addition to Holocaust literature … we have heard many of the atrocities recounted in these pages before. But we must go on hearing them. This is a very fine book indeed.’

‘Extraordinary life-affirming book of survival against the odds, of love and hope, and the threads of humanity that unite us all’

‘… a book of exhaustive historical scholarship and profound emotional dedication.’

‘A beautifully wrought book that is both a detective story and a family history.’

– The Times of Israel

‘Occasionally there appears a book so devastating that the only response is stunned silence … When Time Stopped is about the triumph of the human spirit.’

‘This deeply personal narrative tells the story of Ariana Neumann’s family, many of whom were killed by Nazis, and grapples with Neumann’s attempt to uncover secrets left behind by her Holocaust-survivor father after his death.’

‘Reads like a thriller and it is so, so timely. The work and emotion put into [the] book is unbelievable.’

‘Lucidly-written, this is a gripping, heart-wrenching journey back to wartime Prague and Berlin. Ariana Neumann has written the book that her remarkable father simply couldn’t.’

‘The story Ariana Neumann has to tell – a true one – is both exotic and extraordinary. Her combination of impeccable research with a pitch-perfect sense of narrative and suspense kept this early bird up reading, utterly captivated for every single moment, until long after dawn. I can’t begin to remember how many people I’ve since urged to buy this moving and highly original tribute to a remarkable man. What is truly astonishing is that it marks Neumann’s debut.’

‘The story Ariana Neumann has to tell – a true one – is both exotic and extraordinary. Her combination of impeccable research with a pitch-perfect sense of narrative and suspense kept this early bird up reading, utterly captivated for every single moment, until long after dawn. I can’t begin to remember how many people I’ve since urged to buy this moving and highly original tribute to a remarkable man. What is truly astonishing is that it marks Neumann’s debut.’

A Memoir of My Father's War and What Remains

By Ariana Neumann
LIST PRICE £16.99
PRICE MAY VARY BY RETAILER