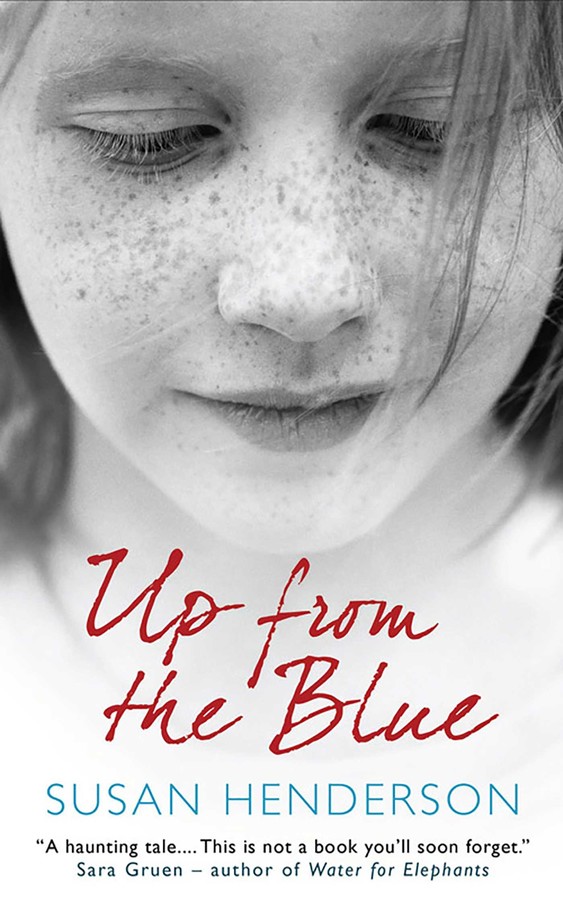 Up from the Blue

Tillie is an eight-year-old girl who doesn't stop. She buzzes with an incessant creative energy, dreaming and dancing and always talking, talking, talking: and all for her beautiful mother Mara. But for Mara even the ordinary world is too much; suffocating under an unshakeable misery, all she longs for is life to leave her alone. When Tillie's father receives a promotion, he sees a new chance to impose order - and by the time Tillie arrives in their new house her mother is nowhere to be seen. Tillie's imagination feverishly tries to solve the mystery, but the truth is far more distressing than she ever could have thought. An achingly real depiction of a family struggling with mental illness, Up from the Blue is a wrenching debut recalling the works of Lionel Shriver, Mark Haddon, and Emma Donoghue.

Susan Henderson is a two-time Pushcart Prize nominee and the founder of the literary blog LitPark: Where Writers Come to Play (www.litpark.com). Her work has appeared in Zoetrope: All-Story, the Pittsburgh Quarterly, North Atlantic Review, Opium, amongst others.

"When Tillie goes into labor while her husband is overseas, she must turn to her estranged father for help. Seeing him brings up painful memories. Her childhood was defined by the conflict between her flighty, moody mother and taciturn, controlling father. Henderson shifts to the past and has young Tillie tell the story of how her father’s military position forces the family to move, after which her mother sinks into a deep depression and withdraws from her family’s life completely. Tillie cannot process why or how her mother has disappeared, so she places the blame on her father. Now, with the birth of her own daughter, adult Tillie must come to terms with how her father chose to protect her. Henderson shows remarkable compassion in her debut novel, an affecting portait of depression through a child’s eyes."

“Henderson beautifully portrays this family in crisis through its most voluble and consistent member. Rapturous prose reveals young Tillie’s heart as she yearns for the mother who will make her world better but who can’t seem to mend her own tortured soul. A triumphant debut.”

“Inescapable sadness is threaded through with surprising moments of joy, in an intimate story that dispels the usual notions of victims and oppressors.”

“Up from the Blue is a beautiful, haunting, spirited debut, charged with secrets and deep longing. Susan Henderson has written a moving love story, a portrait of that deep lasting love between mother and daughter.”

– Julianna Baggott - Author of Girl Talk, The Miss America Family, The Madam and Which Brings Me to Yo

“Haunting and unsettling, Up From the Blue’s real alchemy is the way it uncovers the stories that alternately save us and keep us from our real truths. Incandescently written, this is a stunning debut with heart.”

– Caroline Leavitt - author of Girls in Trouble and Pictures of You

“A rare literary page-turner full of shocking discoveries and twists. Susan Henderson has created a remarkable narrator—as memorable for her feistiness as for her tenderness. Up From the Blue is going to be one of this year’s major debuts.”

– Josh Kilmer-Purcell - author of I Am Not Myself These Days

“Susan Henderson’s debut novel Up From the Blue is elegant and engrossing….Tillie Harris is both tender and tough, charming and filled with wonder by the difficulties she must overcome. Henderson is a talent to watch.”

– Danielle Trussoni - author of Angelology and Falling Through the Earth

“Up from the Blue deftly portrays a family with contradictions we can all relate to—it’s beautiful and maddening, hopeful and condemning, simple, yet like a knot that takes a lifetime to untangle. You will love it completely, even as it hurts you…it’s a heartbreaking, rewarding story that still haunts me.”

“A remarkable debut, not just for the uncanny accuracy and charm of eight-year-old Tillie’s narrative voice, but for the way the characters reveal unexpected angles of themselves that somehow make them realer than real. Up from the Blue lingers in the mind.”

– Mark Childress - author of Crazy in Alabama and One Mississippi

“A haunting tale of the terrible ways in which we fail each other; of the whys, the what ifs, and the what nows. This is not a book you’ll soon forget.”

Up from the Blue