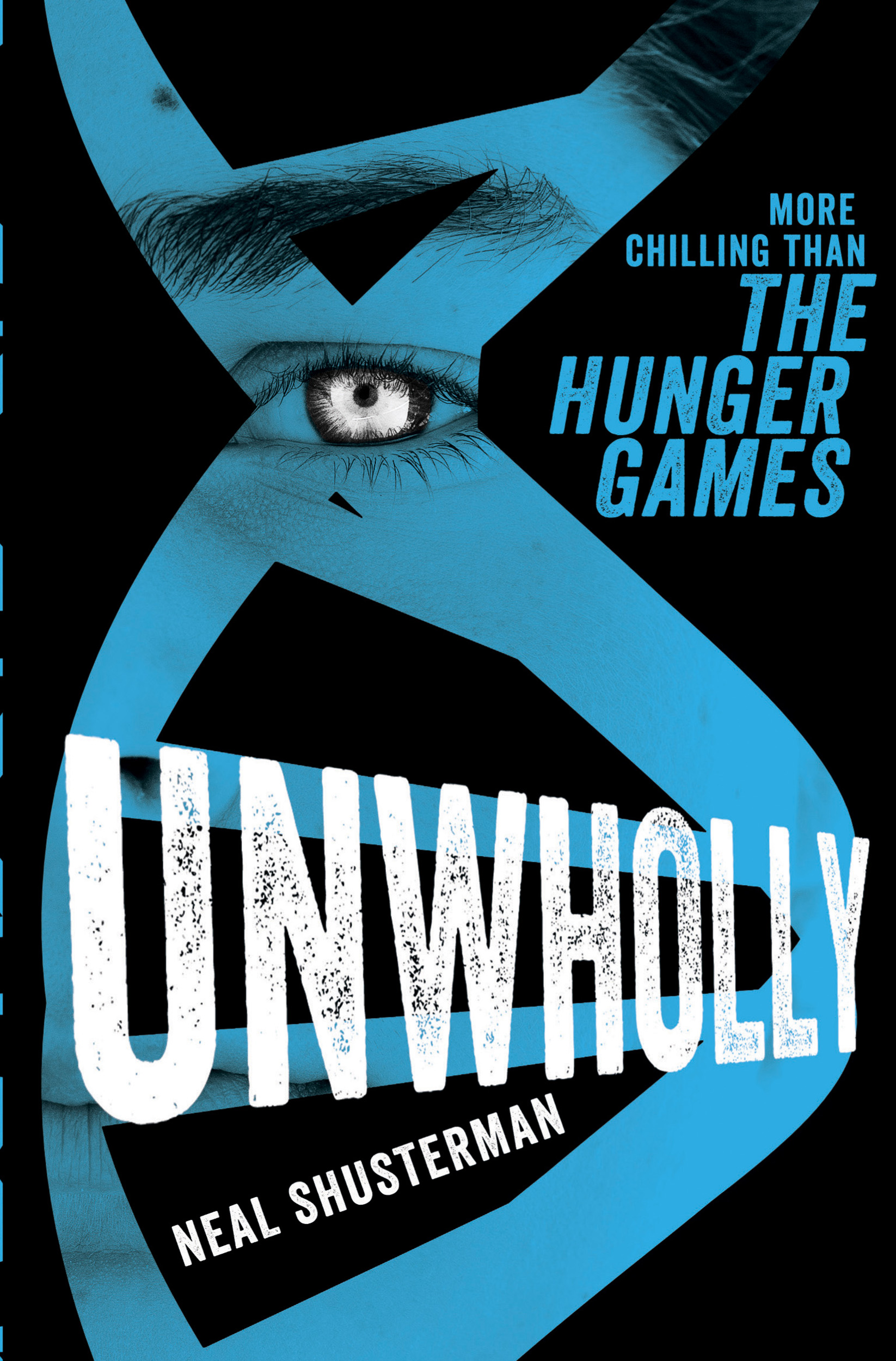 By Neal Shusterman
LIST PRICE £4.99
PRICE MAY VARY BY RETAILER

In a society where unwanted and troublesome teens are salvaged for their body parts, Connor, Risa and Lev continue to fight against the system that would 'unwind' them. Thanks to their high-profile revolt at the Happy Jack Harvest Camp, people can no longer turn a blind eye to unwinding.Ridding society of so-called troublesome teens might be convenient, but its morality has finally been brought into question and a new law passed. However, unwinding has become big business, and there are powerful political and corporate interests, not to mention the illegal 'Parts Pirates', that want to see it not only continue, but expand.

Connor, Risa and Lev each struggle to rescue as many AWOL teens as possible and offer them sanctuary. But life at the Graveyard is hard, rivalries bubble under the surface and the cracks are beginning to show.

And then there is Cam, a teen who does not exist. Made entirely out of parts from one hundred other 'unwinds', Cam is a 21stcentury Frankenstein, a rewound, struggling to find a true identity and meaning, and a place in society. But when a sadistic bounty hunter who takes "trophies" from all the 'unwinds' he captures starts to pursue Connor, Lev and Risa, Cam finds his own fate inextricably bound with theirs…

This novel picks up a year after Unwind. Connor now runs the Graveyard, where kids who run away rather than be unwound can stay safe. Risa is head medic at the facility. But Starkey, a new kid, is undermining Connor’s leadership. Meanwhile, Cam, a teen built exclusively of Unwind parts and groomed by a mysterious organization, falls in love with Risa. When a terrorist tries to kill Lev, he goes on the run with Miracolina, another tithe. At the climax, they all know their only hope is the Graveyard, but they don’t know it’s about to be raided by the Juvie Police.

1. If you were a citizen in the world of this story, which group would you support: the Anti-Divisional Resistance (ADR), opposing Unwinding and supporting AWOL kids; or Proactive Citizenry, a group whose purpose is “to do good in this world” as they define it, by promoting Unwinding as an integral part of life? Now try to envision what circumstances might make you switch sides.

2. Starkey is an incredibly manipulative character who uses a legitimate issue he cares about (protecting Storked kids’ self-esteem) to also gain power for himself. What are some real-world examples of legitimate issues that are often manipulated for personal or political gain?

3. Connor fails to realize until too late how he is being manipulated by Starkey. In the story, how could he have recognized that someone was manipulating him? How can you tell when someone is trying to manipulate you?

4. The author uses various forms of irony throughout the story, from character moments (for example, when Connor appoints Starkey to his inner circle, he writes “for once he’s sure he’s made the right decision”) to setting (the airplane graveyard as the place where all the AWOL Unwinds have to stay). Find other examples of irony in the novel, and discuss the author’s use of this device—how it can be used for humor, to point out contrasts, and to build suspense.

5. An emergency room nurse explains the rationale for Unwinding: “People out there are dying for lack of parts, but you and your selfish friends in the resistance would rather let good people die.” Discuss the benefits of Unwinding to explain how a society could choose such an unthinkable path. Use some examples from the book, such as NeuroWeaving, and come up with your own.

6. Connor has woken up with his unwound enemy’s arm now attached to his body. Risa resists getting an Unwind’s spine. Lev’s brother Marcus, seriously injured in a terrorist attack, begs for unwound body parts. Cam, a character we come to care about, is made entirely from Unwinds. Why do you think the author dramatized these various scenarios? Why did he present such a wide range of options and choices?

7. The Law of Unintended Consequences describes how attempts to change a complex system often backfire. In the novel, the Cap-17 Law lowers the age of Unwinding from eighteen to seventeen. But instead of being a great victory, many characters point out the unintended negative consequences of the bill (parents sign the Unwind order earlier, it makes citizens complacent, etc.). What other examples are discussed in the book? What real-life examples of unintended consequences can you name?

8. All three main characters, Connor, Lev, and Risa, feel they are in roles they don’t deserve: Connor doesn’t feel he’s worthy of leading the Graveyard; to the rescued kids at Cavenaugh Mansion, Lev is a spiritual figure revered as a hero, but he feels unworthy of the hero treatment; and Risa struggles with not accepting her cushy role as the companion of Cam. What would you do in each of these situations? What might be the consequences of your choices, both positive and negative?

9. The novel ends with Connor and Lev deciding they have to find a way to change their society to end Unwinding for good. The novel concludes with the two of them still searching for a solution. Given the nature of the world they live in, and the things the characters have already tried, what do you think they will decide to do? (You’ll have to wait for the sequel to find out what the characters in the book do.)

1. When Connor’s team rescues a teen about to be unwound, he makes the parents write down the reasons the kid was going to be unwound. Part of the reason he does this is to show them how most of their reasons are petty or unfair. Write a rebuttal for any of the kids in the book: Why they should not be unwound?

2. The novel includes several political ads and public service announcements in support of Unwinding. Do some research on political and advocacy advertising, and find specific examples of historic and current political ads (for example, the LBJ “Daisy” ad). How were these ads influential? Who pays for them? Do you agree with the ads you’ve found, or disagree? Do you feel the influence of political ads can outweigh their content?

3. Lev tells an at-risk kid, “Stay clean till seventeen,” which could be a slogan against Unwinding. Perhaps what the Anti-Divisional Resistance needs is better marketing. Develop a multimedia advertising campaign for the ADR to counter the slew of ads supporting Unwinding in the novel. What slogans can you come up with? Outline your media strategy. Produce a sample (or “spec”) TV commercial.

4. Cam speaks in word associations, or “metalinguistics” (for example, he says “Hand on stove, broken arm,” when he’s searching for the word “pain”). Create your own list of word associations for familiar words and phrases. As a game, individually or in groups, challenge others to guess each word or phrase you’re trying to communicate.

5. While Miracolina is at the Cavanaugh mansion, she is given an assignment to “write the story of you—your biography. Not the life you’ve lived, but the life you’re going to live . . . the biography you might write forty, fifty years from now.” Miracolina thinks of a creative way to answer this question. Come up with your own creative way to answer this question for yourself, either through writing, music, performance, or visual art.

6. Cam is made solely from Unwinds. Designed to be an everyman, his face reflects that: strips of flesh from kids of different races form a “glorious mosaic of humanity.” Recreate this look as a collage. Use photographs from magazines or your own digital photographs to create an attractive individual (portrait or full body) using pieces from several different people.

7. Before they abandon the Graveyard, Connor wishes he could have had every kid carve their names in the steel of one of the airplanes as a permanent record that they were there, that they existed. As a class, create some kind of permanent marker that every kid can sign to memorialize their presence.

Neal Shusterman is the New York Times bestselling author of more than thirty award-winning books for children, teens, and adults, including the Unwind dystology, the Skinjacker trilogy, Downsiders, and Challenger Deep, which won the National Book Award. Scythe, the first book in his latest series, Arc of a Scythe, is a Michael L. Printz Honor Book. He also writes screenplays for motion pictures and television shows. Neal is the father of four, all of whom are talented writers and artists themselves. Visit Neal at StoryMan.com and Facebook.com/NealShusterman.

By Neal Shusterman
LIST PRICE £4.99
PRICE MAY VARY BY RETAILER

SEE ALL
See more by Neal Shusterman
Thank you for signing up, fellow book lover!