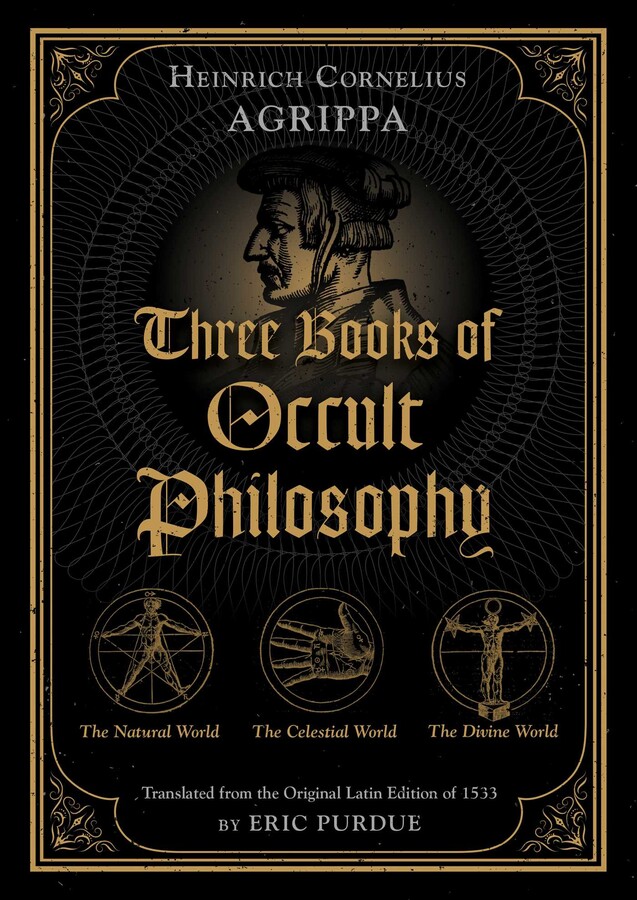 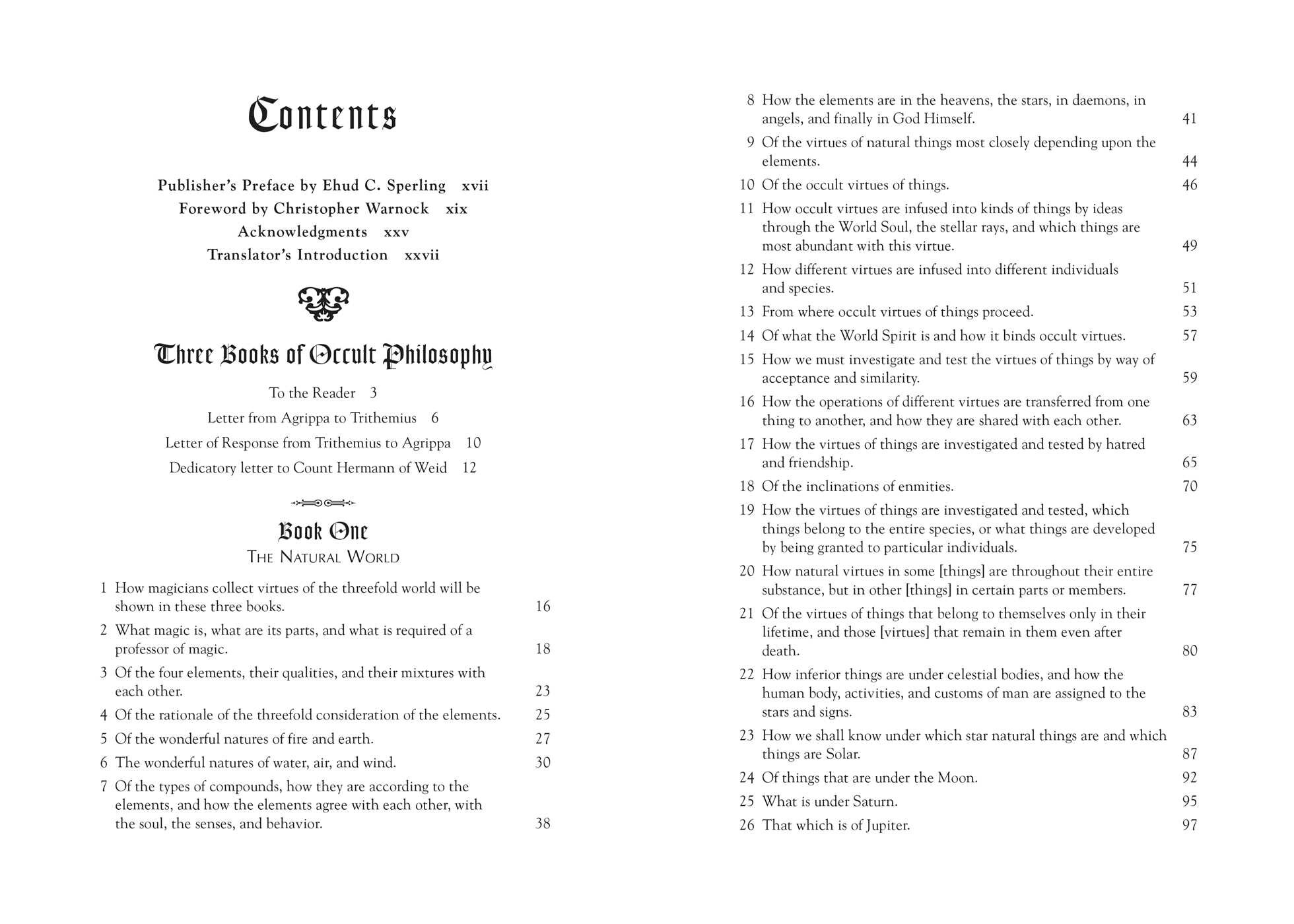 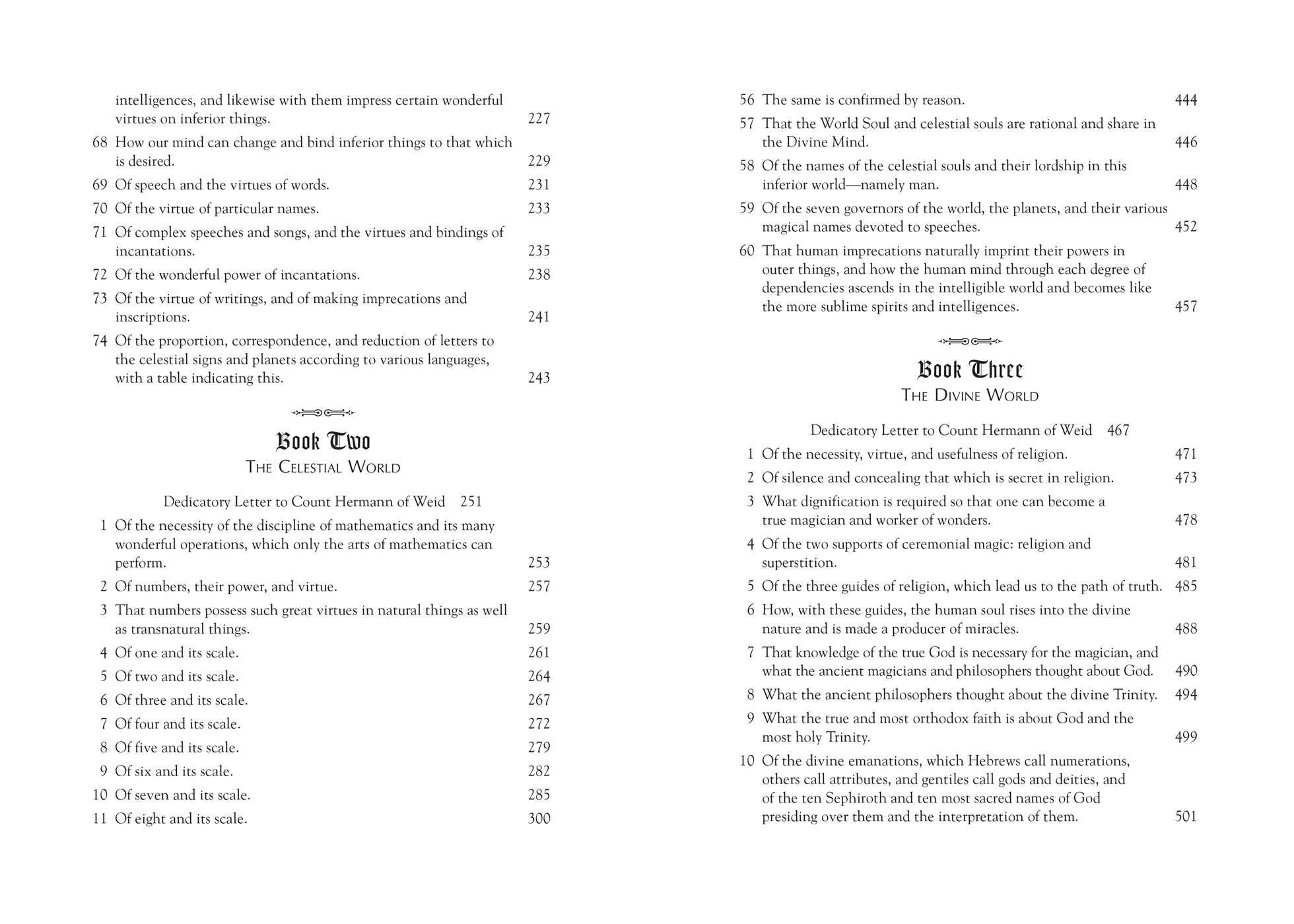 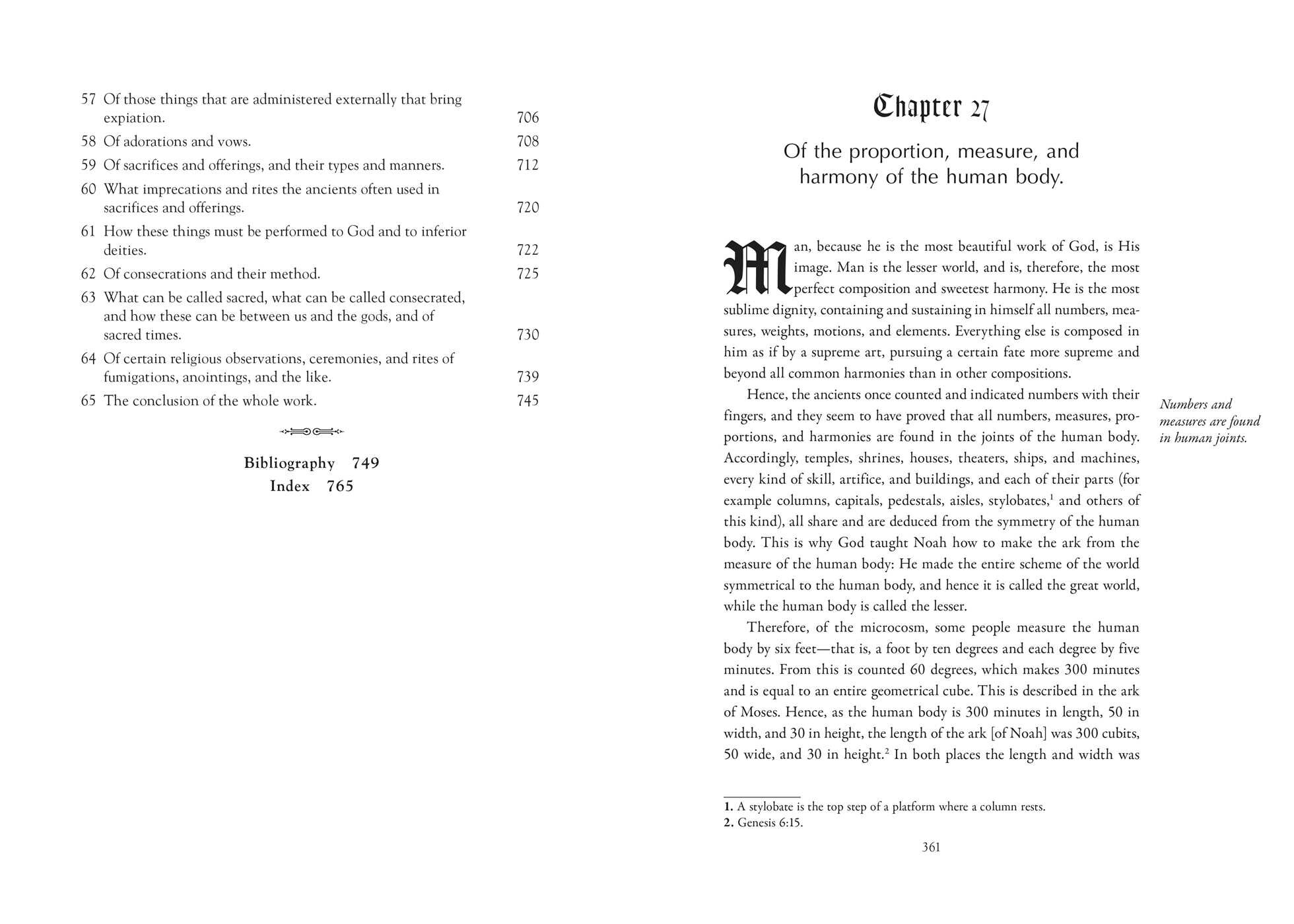 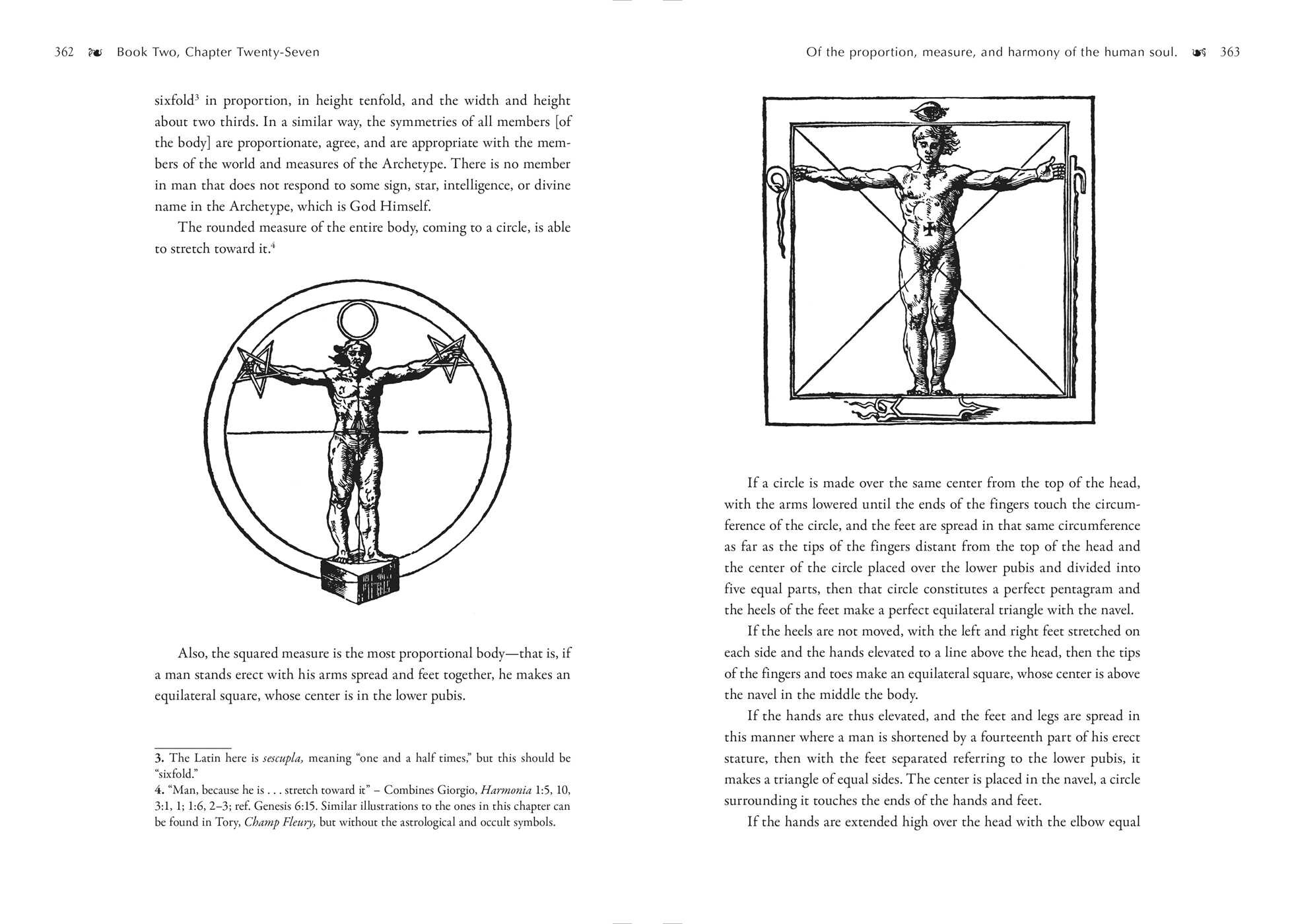 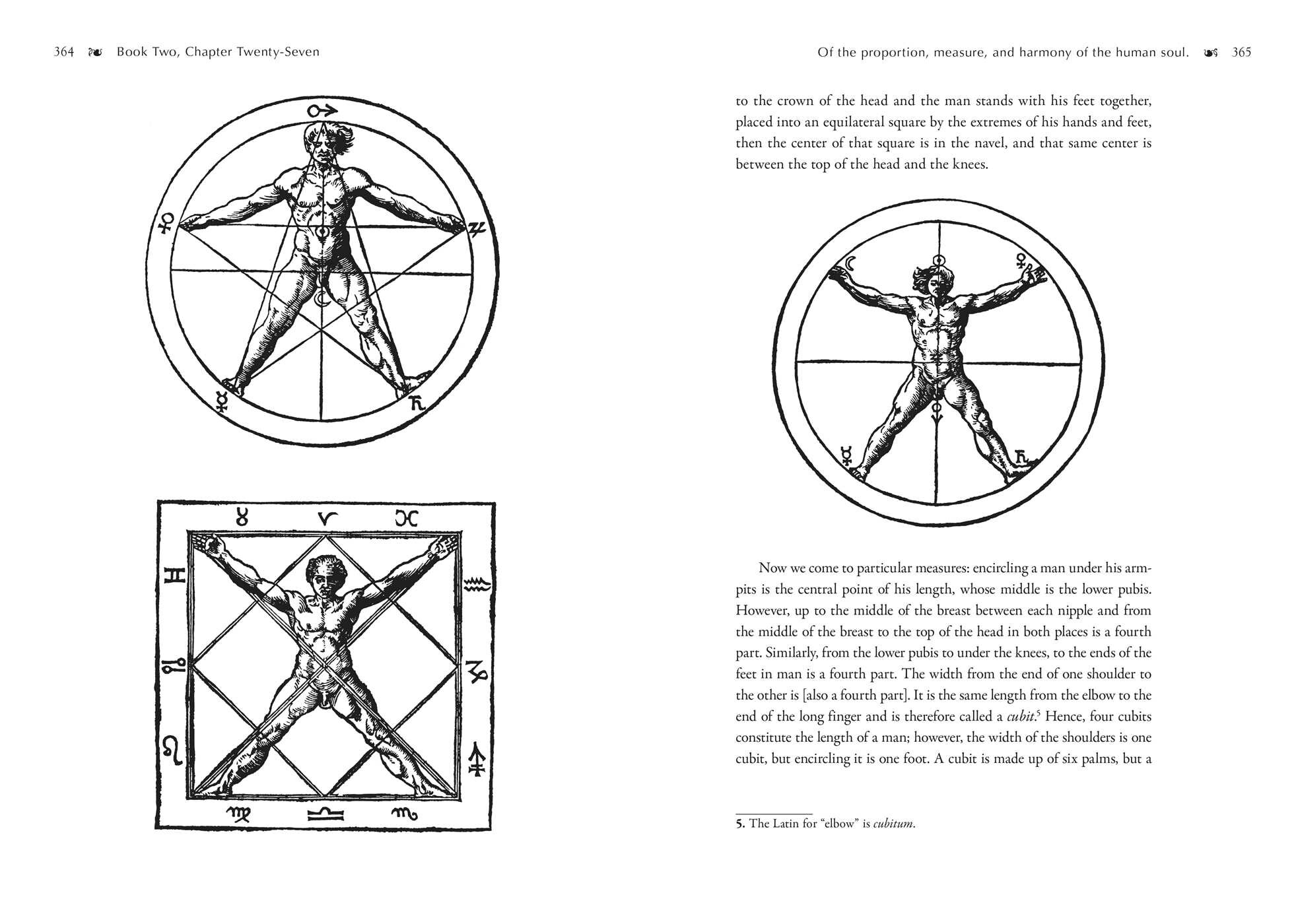 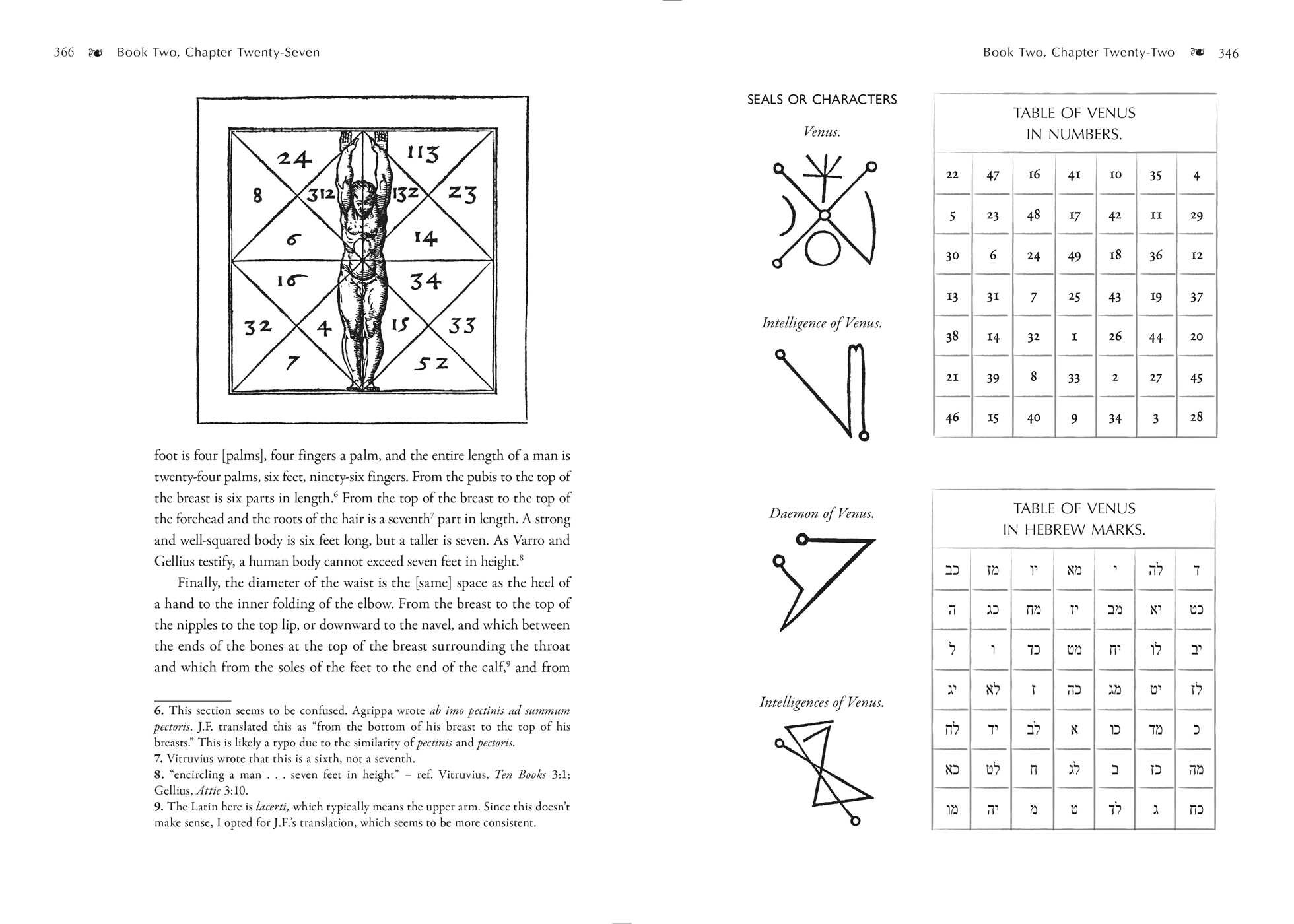 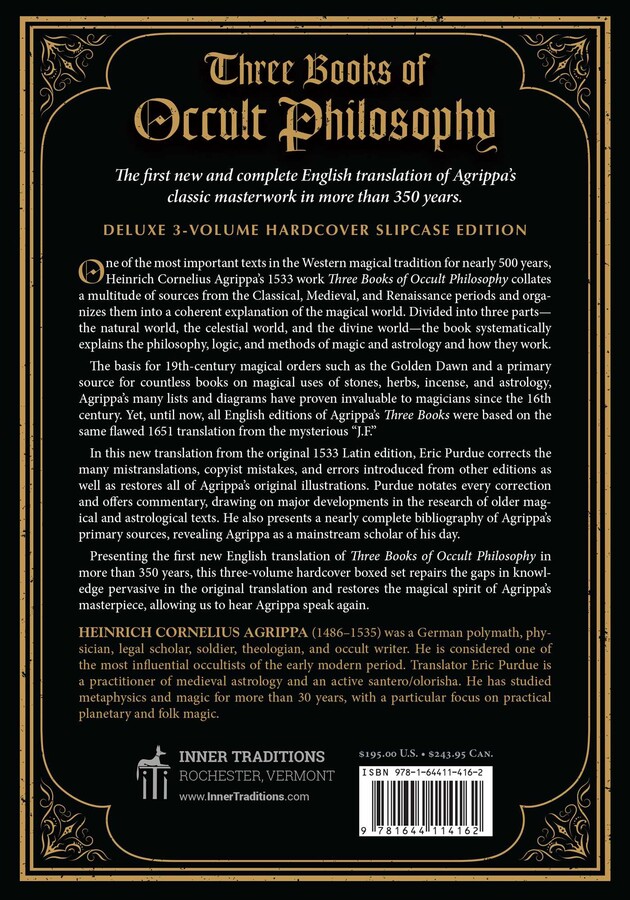 One of the most important texts in the Western magical tradition for nearly 500 years, Heinrich Cornelius Agrippa’s 1533 work Three Books of Occult Philosophy collates a multitude of sources from the Classical, Medieval, and Renaissance periods and organizes them into a coherent explanation of the magical world. Divided into three parts--the natural world, the celestial world, and the divine world--the book systematically explains the philosophy, logic, and methods of magic and astrology and how they work, offering numerous examples, diagrams, techniques, and analogies.

Agrippa’s seminal masterpiece provided the basis for 19th-century magical orders such as the Golden Dawn and has been a primary source for countless books on magical uses of stones, herbs, incense, and astrology. Additionally, Agrippa’s many lists and diagrams, especially the planetary seals and magic squares, have proven invaluable to magicians since the 16th century. Yet, up until now, all English editions of Agrippa’s Three Books were based on the same flawed 1651 translation from the mysterious “J.F.”

In this new translation from the original 1533 Latin edition, Eric Purdue corrects the many mistranslations, copyist mistakes, and errors introduced from other editions, as well as restores all of Agrippa’s original illustrations. He notates every correction from earlier editions and offers commentary to rectify the original translator’s mistranslations. Drawing on major developments in the research of older magical and astrological texts since the 1990s, Purdue also presents a nearly complete bibliography of Agrippa’s primary sources, revealing how Agrippa was not writing from missing or secret texts but was a mainstream scholar of his day.

Presenting the first new English translation of Three Books of Occult Philosophy in more than 350 years, this three-volume hardcover boxed set repairs the gaps in knowledge pervasive in the original translation as well as restores the magical spirit of Agrippa’s masterpiece, allowing us to hear Agrippa speak again.

Of the tables of the planets and their virtues and principles, and which divine names, intelligences, and daemons are placed in charge of them.

Additionally, magicians refer to certain tables of numbers assigned to the seven planets, which are called the sacred tables of the planets. They signify many and very great virtues of the heavens, inasmuch as they represent the divine reasoning of the celestial numbers, impressed upon the celestials by the Divine Mind through the reason of the World Soul, and the sweetest harmony of those celestial rays according to proportion of effigies, co-signifying the super-mundane intelligences, which can be expressed in no other way than by the marks of numbers and characters.

Indeed material numbers and figures cannot do anything in the mysteries in hidden things, unless represented by formal numbers and figures, inasmuch as they are ruled and formed by the divine intelligences and enumerations, which tie the extremes of matter and spirits to the will of the elevated soul through great affection by the celestial virtue of the operation: a power received from God through the Universal Soul, and the observations of the celestial constellations applying in matter appropriate for the form, the medium being disposed by magical skill and knowledge. But now we must hasten to explain each table.

The table of Saturn.

The first of these is assigned to Saturn, because it consists of a square of three, containing the particular numbers of nine and in any line three in every way and each diameter constitutes 15, but the total sum of numbers is 45. Divine names are assigned to these filling up names from the preceding numbers with an intelligence for the good and a daemon for the evil. From these same numbers are elicited a seal or character of Saturn and his spirit, such as we will write in his table below. They say that this table engraved in a lead plate with a fortunate Saturn, helps birth, men returning safely, and powerful and excellent success in petitions to princes and powerful [men]. However, if Saturn is made unfortunate, it hinders buildings, planting, and the like, overthrows men from honors and dignities, begets quarrels and discord, and disperses armies.

The table of Jupiter.

The second is called the table of Jupiter, which consists of four led into itself, containing 16 particular numbers and four in any line or diameter, constituting 34, but the entire sum is 136. Presiding over those are divine names with an intelligence for good, and a daemon for evil and a character and spirit of Jupiter is elicited from them. They say that if Jupiter is powerful and in rulership, and [these characters] are impressed on a silver plate, it brings gain and wealth, gratitude, love, peace, and concord with men, it appeases enemies, secures honors, dignities, and councils. It dissolves sorceries if engraved in coral.

The table of Mars.

The third table is for Mars, which is a square consisting of five, including 25 numbers, and from these are five in any side or diameter, which makes 65, and the entire sum is 325. Presiding over them are divine names with an intelligence for good and a daemon for evil, and a character and spirit of Mars are elicited from them. These are carved while Mars is fortunate in an iron plate or a sword making one powerful in war and judgments and petitions, and frightful to enemies, and is excellent for victory against enemies, but if carved in the stone cornelian, it draws blood and menstrua. However if Mars is unfortunate and carved in red copper plate, it hinders buildings, overthrows powerful men from dignities, honors, and wealth, it generates discord, quarrels, and hatred in men and beasts, chases away bees, pigeons, and fish, hinders mills, makes hunting and battles unfortunate, generates sterility in men, women, and other animals, and strikes fear in all enemies and compels them to exhibit respect.

The table of the Sun.

The fourth table is for the Sun consists of a square of six and contains 36 numbers, which has six in any side, and diameter producing 111, and the entire sum is 666. Presiding over them are divine names with an intelligence for good and a daemon for evil, and from them are elicited characters and spirits of the Sun. When the Sun is fortunate if carved in gold plate, it makes the wearer famous, amiable, pleasing, powerful in all works, makes men equal with kings and princes, elevates them to the highest peaks of fortune, and makes one acquire whatever they desire. But if the Sun is unfortunate, it makes one a tyrant, arrogant, ambitious, insatiable, and have an evil ending.

The table of Venus.

The fifth table is Venus, containing seven led into itself, that is, having 49 numbers, which are seven on all sides and diameters containing 175, and the entire sum is 1225. Presiding over them are divine names with an intelligence for good and a daemon for evil, and from them are elicited a character and spirits for Venus. When Venus is fortunate and carved in silver plate, it brings concord, interrupts quarrels, grants the love of women, brings conception, drives away sterility, brings power in coition, dissolves enchantments, generates peace among men and women, and makes whichever animal and cattle fertile and bear plentifully. If placed in a pigeon house, it increases pigeons. It opposes all sickness and melancholy, generates joy, and if worn by a traveler, it [makes them] fortunate. But if Venus is unfortunate and formed in copper, it makes everything opposite to what was previously said.

The table of Mercury.

The sixth table is Mercury, which results in eight led into itself, containing 64 numbers, of which there are eight in any direction, and in each diameter making 2080. Presiding over them are divine names with an intelligence for good and a daemon for evil and elicited from them are characters for Mercury and its spirits. If Mercury is made fortunate, carve in silver, tin, or yellow brass, or inscribed on virgin parchment, it makes the wearer pleasing, and fortunate for whatever they wish to obtain. It confers gain and chases away poverty. It confers memory, intellect, divination, and noticing occult things by dreams. If Mercury is unfortunate, it makes the opposite to all of the above.

The table of the Moon.

The seventh table is the Moon. It contains nine multiplied by itself, having 81 numbers, in which there are nine on any side and diameter, producing 369, and the entire sum is 3321. Presiding over them are divine names with an intelligence for good and a daemon for evil and elicited from them are characters of the Moon and its spirits. When the Moon is fortunate and carved in silver, it makes the wearer pleasing, amiable, delightful, eager, honorable, and wards away all wickedness and ill will. It excels in security in journeys, makes wealth and a healthy body, and drives away enemies and other harmful things from whatever place they wish. If the Moon is unfortunate and [carved] in lead, and buried in some place, it makes that place, its inhabitants, visitors, ships, springs, rivers, and mills unfortunate. It makes all men unfortunate, against whom it was duly made, making them flee from their land and country, and from the place of his home wherever [the image] is buried. It hinders physicians, orators, and men in whichever office it was made against. But the way these seals and characters are elicited from the stars, and the spirits, the acute investigator will easily be able to understand from verifying these tables.
Heinrich Cornelius Agrippa

Heinrich Cornelius Agrippa von Nettesheim (1486-1535) was a German polymath, physician, legal scholar, soldier, theologian, and occult writer. Entering the University of Cologne at the age of 13, he graduated with a Master of Arts at 16 and went on to study with abbot Johannes Trithemius, famous as the teacher of Paracelsus. Acclaimed for his lectures on Reuchlin and the Corpus Hermeticum at universities across Europe, Agrippa acted as archivist for the Holy Roman Emperor Charles V. Defying accusations of heresy and scrutiny by the Inquisition of Cologne, he published the final version of Three Books of Occult Philosophy two years before his death. Agrippa is considered one of the most influential occultists of the early modern period.