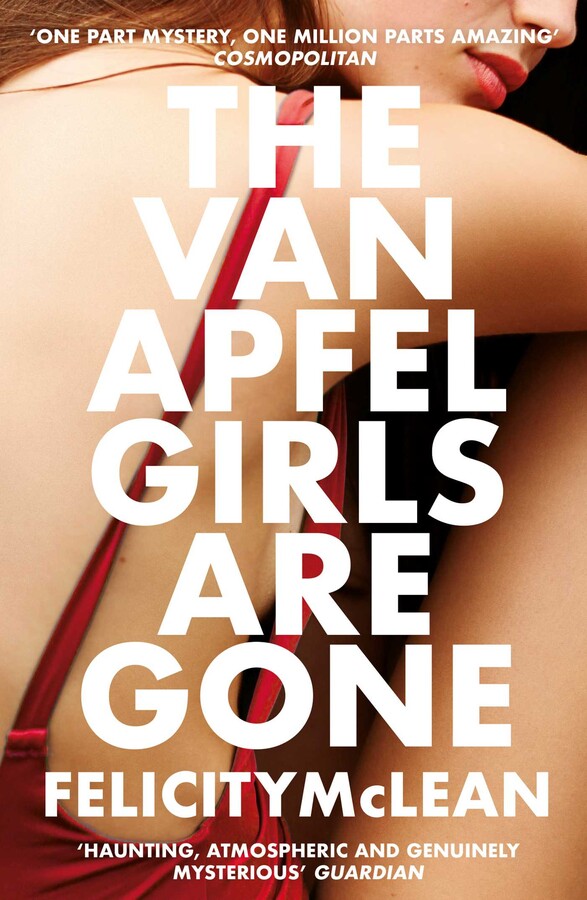 The Van Apfel Girls Are Gone

'We lost all three girls that summer. Let them slip away like the words of some half-remembered song and when one came back, she wasn't the one we were trying to recall to begin with.'

Tikka Molloy was eleven and one-sixth years old during the long hot summer of 1992, growing up in an isolated suburb in Australia surrounded by encroaching bushland. That summer, the hottest on record, was when the Van Apfel sisters – Hannah, the beautiful Cordelia and Ruth – mysteriously disappeared during the school's Showstopper concert, held at the outdoor amphitheatre by the river. Did they run away? Were they taken? While the search for the sisters unites the small community, the mystery of their disappearance has never been solved.

Now, years later, Tikka has returned home and is beginning to make sense of that strange moment in time. The summer that shaped her. The girls that she never forgot.

'A coming-of-age drama as much as a crime story, this isn’t a book for those who like things wrapped up neatly, but readers who enjoy something haunting, atmospheric and genuinely mysterious have a treat in store.'

'One part mystery, one million parts amazing, this debut from Felicity McLean will be a summer fave.'

‘An entrancing, melancholy debut... The landscape is superbly captured, but it is the relationship between Tikka and the sisters that lingers... Mesmerising.’

'Compelling...it doesn't disappoint...It's rare, and even unnerving, to read something like this and find it absent of fetishization of a young woman's life, and thus full of tenderness and compassion, and a real sense of what gets lost in these situations.'

'A taut, beautifully written thriller with a scorching expansive setting. The Van Apfel Girls Are Gone is a fantastic debut and a story that lingers.'

– Lisa Ballantyne, author of The Guilty One

'A smart, classy thriller that blazes with the heat of Australia and slowly reveals its many layers.'

'I deeply admire the languid, lived-in prose of Felicity McLean’s lovely novel The Van Apfel Girls are Gone. This is a story as much about forgiving ourselves our own childhoods, as it is about acknowledging and embracing the people we’ve become because of those adolescent (and sometimes life altering) choices.'

'This debut, part coming-of-age story and part crime thriller, is both forceful and unnerving.'

'One would expect [Felicity McLean], who has a background in journalism and biography, to be particularly good at detailing the who, what, where, and when of a mysterious disappearance. She is.'

'Delicious attention to detail... [The Van Apfel Girls] is visceral and tangible.'

'Impressive... A well written story which convincingly evokes the place and time in which it is set.'

'How do you escape your childhood, emotionally, actually? This compelling mystery by Felicity McLean has a rare depth of psychological and emotional truth. It will engage your heart.'

– Delia Ephron, author of The Lion is In

'A hot, tense thriller set in the midst of a scorching Australian summer, The Van Apfel Girls Are Gone is provocative, gripping, and sure to get under your skin.'

'McLean expertly maintains an air of suspense as the tragedy unfolds. Tikka is an unforgettable, if not entirely reliable, narrator full of black humour, brutal honesty and naive curiosity. This novel is one that will haunt readers long after they have turned the last page.'

'Engrossing and goosebumpy from start to finish, this novel about three young sisters who vanish all together one night has the chilling feel of true events that are stranger than fiction, and the stuff of nightmares. But the magic of McLean's art is not just her gift for evoking, in almost hallucinogenic detail, her haunted narrator's childhood – a time and place linked to Australia's notorious true-life story of a baby dragged off in the night by a wild animal – but to do so in the most charming and irresistible of narrative voices. The result is a novel that is as delightful as it is terrifying, and just scary good.'

– Tim Johnston, bestselling author of Descent and The Current

'A smart debut. Beautifully atmospheric with its great sense of time and place.'

– Melina Marchetta, author of On the Jellicoe Road

'A wry, sad coming-of-age story and a well-crafted first novel.'

The Van Apfel Girls Are Gone