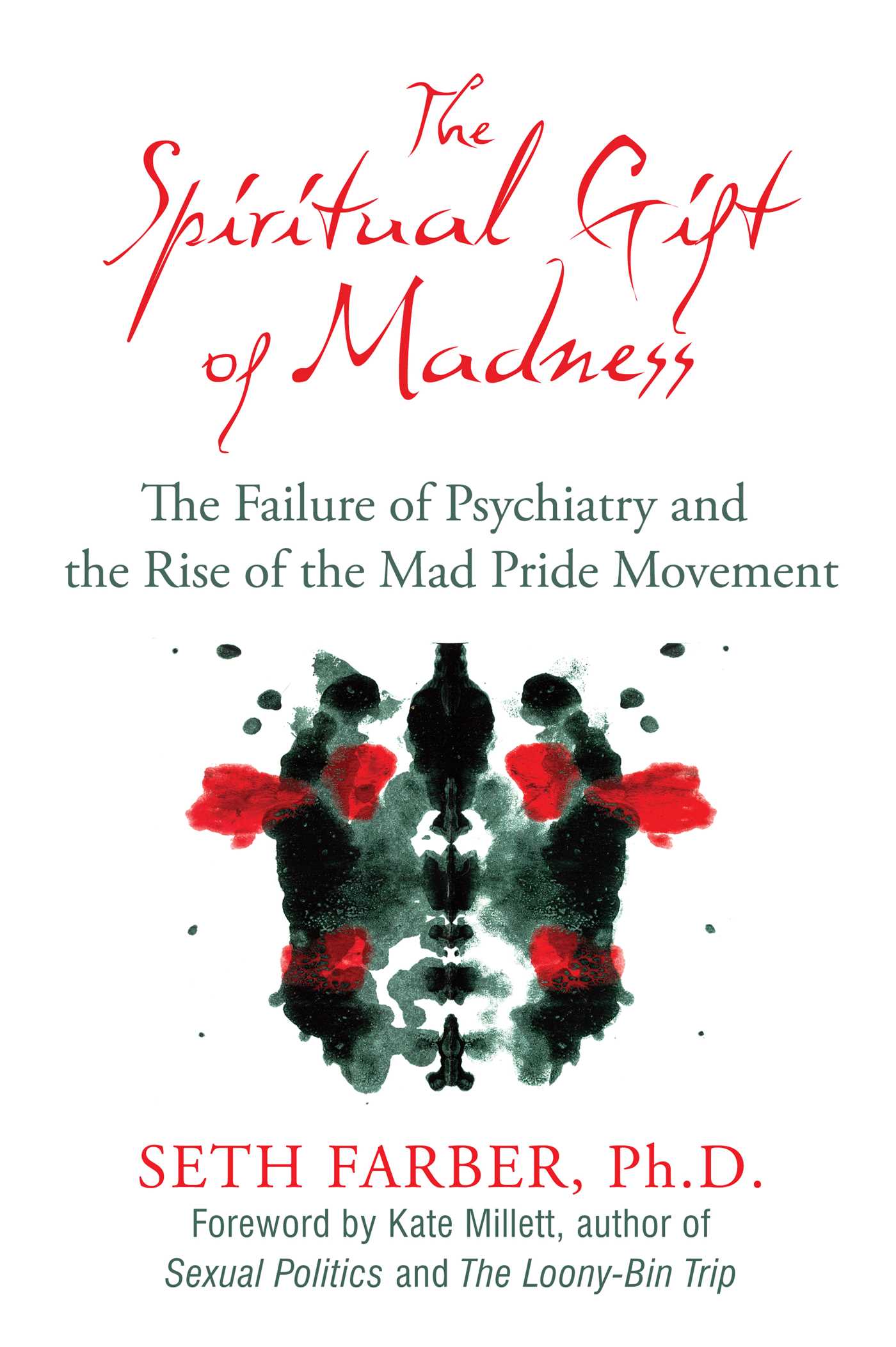 The Spiritual Gift of Madness

• Explains how many of those diagnosed as schizophrenic, bipolar, and other forms of “madness” are not ill but experiencing a spiritual awakening

Many of the great prophets of the past experienced madness--a breakdown followed by a breakthrough, spiritual death followed by rebirth. With the advent of modern psychiatry, the budding prophets of today are captured and transformed into chronic mental patients before they can flower into the visionaries and mystics they were intended to become. As we approach the tipping point between extinction and global spiritual awakening, there is a deep need for these prophets to embrace their spiritual gifts. To make this happen, we must learn to respect the sanctity of madness. We need to cultivate Mad Pride.

Exploring the rise of Mad Pride and the mental patients’ liberation movement as well as building upon psychiatrist R. D. Laing’s revolutionary theories, Seth Farber, Ph.D., explains that diagnosing people as mad has more to do with social control than therapy. Many of those labeled as schizophrenic, bipolar, and other kinds of “mad” are not ill but simply experiencing different forms of spiritual awakening: they are seeing and feeling what is wrong with society and what needs to be done to change it. Farber shares his interviews with former schizophrenics who now lead successful and inspiring lives. He shows that it is impossible for society to change as long as the mad are suppressed because they are our catalysts of social change. By reclaiming their rightful role as prophets of spiritual and cultural revitalization, the mad--by seeding new visions for our future--can help humanity overcome the spiritual crisis that endangers our survival and lead us to a higher and long-awaited stage of spiritual development.

Chapter 9
The Roots of the Icarus Project

Mad Pride began in America with the foundation of the Icarus Project (TIP) in 2002 by Sascha DuBrul and Ashley McNamara. The Icarus Project was created “for people living with dangerous gifts that are commonly diagnosed and labeled as ‘mental illnesses.’” The bold mission statement of the Icarus Project declared, “We are a network of people living with and/or affected by experiences that are often diagnosed and labeled as psychiatric conditions. We believe these experiences are mad gifts needing cultivation and care, rather than diseases or disorders. By joining together as individuals and as a community, the intertwined threads of madness, creativity, and collaboration can inspire hope and transformation in an oppressive and damaged world. Participation in The Icarus Project helps us overcome alienation and tap into the true potential that lies between brilliance and madness.”

This statement is subversive of received wisdom in several ways. First it emphasizes and valorizes the idea of the distinctiveness of mad people, which it is stated enables them to make an unusual and indispensable contribution to the healing of the world. This extraordinary claim had never been made by the patients’ rights movement in the past. Only R. D. Laing made such a claim and was ignored by the patients’ movement. This theme was elaborated upon by various members of the Icarus Project who posted on its website and by Ashley McNamara in essays.

Note also that it defines madness as a “gift”--to a mad person and to the human community. Mad gifts entail responsibility--to care for and cultivate them. Although the sentence with the word “transformation” is vaguely formulated, the implication--reinforced by the evocative wording of the subsequent sentence--is that mad persons as a community, as Mad Pride, can contribute to the profound transformation, and ultimately the salvation, of the world.

This is what I have termed a redemptive-messianic vision.

The Icarus Project’s conversation forum demonstrates what has been obvious for years to many therapists who have worked with the mad: the mad are fascinated with spirituality. As stated in the introduction, there is abundant evidence that many of the mad have had messianic experiences, including feeling a sense of mission. Mental health professionals regard these messianic experiences as definitive symptoms of psychosis. In myriad ways the Icarus Project and the Mad Pride movement have differentiated their position from the secularism of the psychiatric survivors’ movement. Yet within Mad Pride there is a tension between a redemptive-messianic perspective and the noncommittal position of postmodern pluralism.

Mad Pride and the Postmodern Vision

The secular pluralist zeitgeist seems to be dominant today within the Mad Pride movement, although TIP forums still team with discussions about spirituality. In early 2008, DuBrul was experimenting with explorations in “the spirit world” (one can find a similar distinction between two worlds both in shamanism and in the literature on out-of body experiences). He believed that as a mad person he had a natural penchant for exploring the spirit world.

After his “breakdown” and hospitalization in 2008, DuBrul went to a Hindu ashram in upstate New York to study, meditate, and worship in order to develop a greater capacity for mental and spiritual discipline.

Sascha DuBrul: I was raised an atheist. I was raised by a man who was beaten by nuns in Catholic school in the 1950s in Queens. I remember very clearly asking my dad if there was a God and he said “No.”

Farber: Were you still an atheist when you founded the Icarus Project?

Sascha DuBrul: Yes. I dropped out of college when I was twenty and I started traveling, and shortly thereafter I had some intense spiritual experiences. I definitely wouldn’t have used the word God. After my first hospitalization when I was eighteen, I had visions. I had this vision that the world was going to end, but somehow we were all going to live on--on some other kind of world that was like television. I came out of that experience and didn’t know what to think of it.

In a 2002 article, DuBrul had defined his position that psychiatric drugs were indispensable (for some people) as the sensible “middle ground”: “I think it’s really about time we start carving some more of the middle ground with stories from outside the mainstream and creating a new language for ourselves that reflects all the complexity and brilliance that we hold inside.” Of course this last phrase, “creating a new language,” suggests that DuBrul had something else in mind besides a middle ground. Thus it is not surprising that by the time he coauthored the Icarus mission statement he was far away from the middle ground (although he continued to feel he needed psychiatric drugs) and was moving increasingly toward a commitment to a messianic-redemptive vision, a trajectory that came to a halt after his hospitalization in 2008.

The postmodern pluralist perspective (as defined by Tarnas) is antithetical to the “totalizing” perspective of redemptive visions. Mad Pride activists are increasingly attracted to postmodernism for a number of reasons. In the first place it accepts difference per se and promotes acceptance of madness in its myriad forms. Second, it is in accord with the ironically detached and skeptical temper of the times, unlike an explicitly spiritual messianic-redemptive vision, which, in the times sounds passionate, “fanatical,” intolerant--too mad, too 1960s-ish. As Mad Pride grows, and becomes more socially visible, the temptation increases to accommodate to larger cultural forces, to sound “reasonable.” Also, a relativistic even-tempered pluralism is friendly and inclusive of everyone--it avoids the risk of alienating those mad people who have not yet broken free of the influence of psychiatry. Repeatedly I was told by the more radical psychiatric survivors that different paradigms work for different people--even the psychiatric paradigm.
Seth Farber

Seth Farber, Ph.D., is a psychologist, public speaker, and a founder of the Network against Coercive Psychiatry. The author of several books, including Unholy Madness, and an editor of The Journal of Mind and Behavior, he lives in New York City.

“By reclaiming their rightful role as prophets of spiritual and cultural revitalization, the mad--by seeding new visions for our future--can help humanity overcome the spiritual crisis that endangers our survival and lead us to a higher and long-awaited stage of spiritual development.”

“The book will appeal to devotees of spirituality and/or metaphysics.”

“This book rightly points out the need to reevaluate our classifications of madness and open the door to the sometimes visionary rantings of our fellow citizens.”

“A fine pick for any mental health collection seeking different perspectives on the idea of insanity and its treatment.”

“Seth Farber is one of the most provocative and original thinkers in America. He brings us to the threshold of the only questions that really matter: the demarcation lines between imagination and objective reality and between ‘madness’ and ‘sanity’. The Spiritual Gift of Madness is an important book that could revolutionize the way progressive religious people regard what is called mental health. ”

– Frank Schaeffer, author of Crazy for God: How I Grew Up as One of the Elect, Helped Found the Religi

“Farber critically considers the role of madness in culture and sees it as a positive force for change rather than a disease needing treatment. At the same time he does not play down the difficulties encountered by those experiencing such ‘initiations,’ but believes we need to cherish them and appreciate their visionary role in a world gone insane.”

The Spiritual Gift of Madness