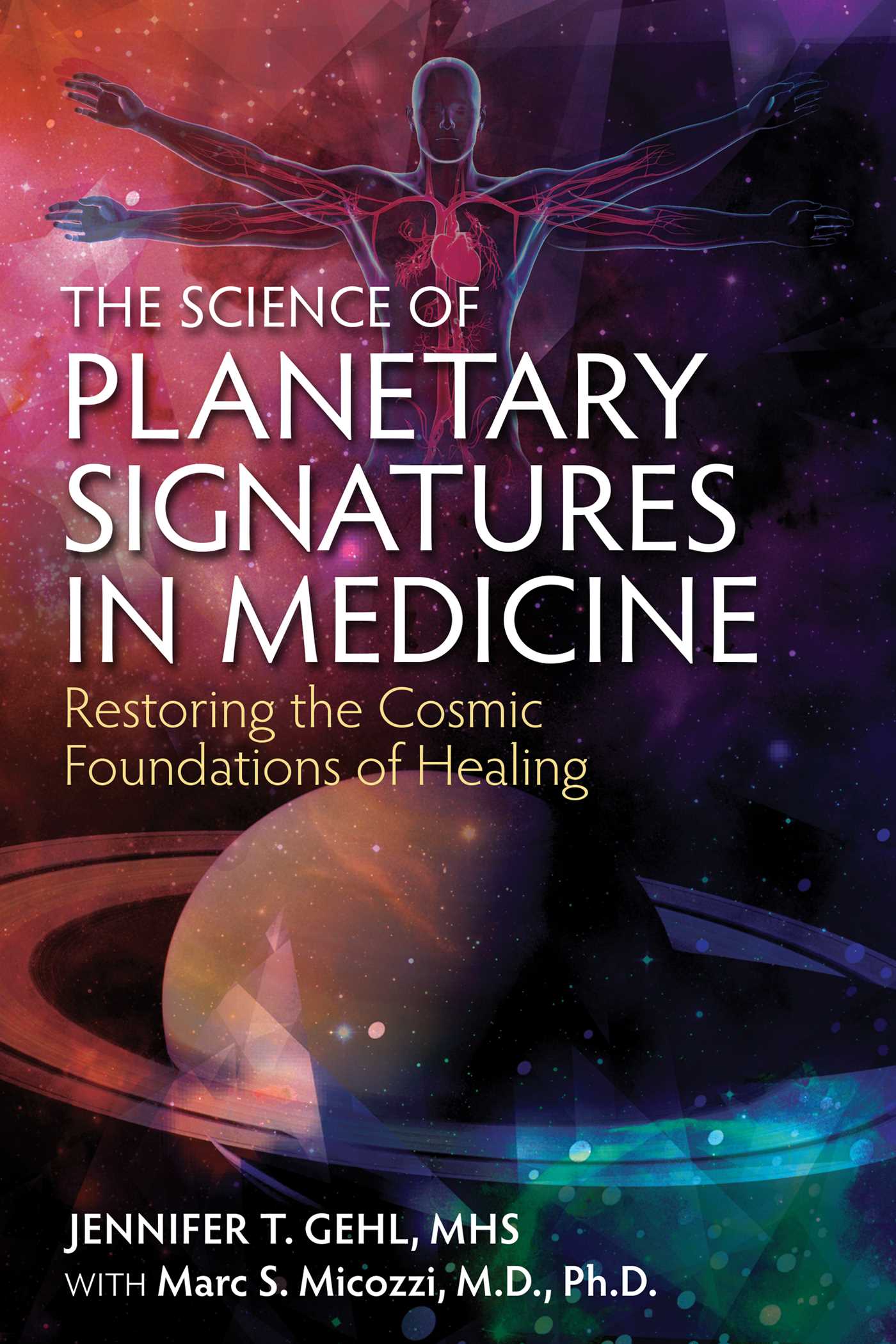 The Science of Planetary Signatures in Medicine

Restoring the Cosmic Foundations of Healing

• Examines how ancient and modern traditions of healing interconnect through the doctrine of signatures, “As above, so below”

• Explains how each sign of the zodiac corresponds not only to parts of the body and its chakras but also to specific plants, herbs, colors, and emotions

• Explores how to use sound healing to harmonize astrological imbalances

When we look at the vast and intricate cosmos--galaxies, planets, organisms, organs, cells, molecules, atoms--there is a fundamental order, a music or harmony of the spheres. Our cells reflect the images of galaxies seen through our telescopes. We are the microcosm, reflecting the macrocosm of the heavens. Our ancestors understood these patterns and connections between humanity and the universe and developed spiritual and healing traditions in line with these cosmic truths. Yet in the 19th century, knowledge of these connections was set aside as medical science sought to create the “one size fits all” approaches to healing that dominate modern medicine today.

In this comprehensive exploration of the celestial influences that underlie health and healing, Jennifer Gehl, with Marc Micozzi, examines how ancient and modern traditions of healing interconnect through the doctrine of signatures, “As above, so below”. She reveals how one’s celestial nature--the arrangement of the cosmos at the moment of birth--has implications for personal health and how each sign of the zodiac corresponds to parts of the body, the chakras, and specific plants, herbs, colors, and emotions. She explains how sound re-arranges forms according to the principles of harmony, leveraging not only the human self-regulating capacity to restore health but also that of the Earth to restore balance and harmony. Also explored are the recurrence of geometric forms in nature and how to apply this knowledge in sound healing and medical astrology.

Weaving together the threads of ancient science and spirit that formed the original tapestry of medicine, Gehl explains how to restore the cosmic foundations of healing for personal, planetary, and universal health and wellbeing.

THE FUTURE AWAITS OUR RETURN

All manner of manifestation is influenced by the invisible realm and contains a stellar imprint, known by ancient physicians as the Doctrine of Signatures. Many have applied these signatures to plants, fruits and vegetables and their medicinal effects on the body. However, little attention has been paid to planetary effects on health.

When we examine Pythagorean concepts of number expressed through geometry, music, and astronomy, it allows us to look at the astrology chart as geometry, as music frozen in time. Therefore, music is a most effective means for restoring harmony to dissonant angles and aspects representing “parts of the self.” By freeing up those harmonic relationships, the individual engages an awakening process that, not only connects neglected parts of the self, it also awakens one’s perception of the greater whole.

This awakening of the self provides access to the intrinsic communication network already existing between humans, animals, plants, earth, and the cosmos. The natural science, upon which the ancients drew to advance all manner of living, is available to us today. There is much to rediscover, and it requires not only asking the right questions but questioning what we are certain we know. Embracing the mystery is the first step toward creating a more wholesome future for medicine.

THE DOCTRINE OF SIGNATURES

Our current medical model is completely out of sync with those who are by nature “spiritual,” and to whom the notion of separating parts in exclusion from the composite body is equally absurd. Knowing the operations of energy, especially in terms of the morphing process of the four elements, we must consider the metaphysical properties of form, particularly that of the human body.

For relevance regarding the practice of medicine, it’s helpful to remember that from the scientific viewpoint, no matter the “first cause” of creation, life force is energy. The laws of physics and thermodynamics show that energy is conserved--it does not die, but merely changes forms. Taken from this perspective, the idea that human life force energy (or any living creature’s) can change form once the physical body dies is plausible. From a strictly scientific perspective, this continuation of life energy does not require a theological mediator or savior. From the Hermetic perspective, whatever governs the subtle realms and higher octaves of space also governs the lower physical octaves of life.

What is helpful, if not required, is having a language that provides a roadmap for understanding the human being’s connection to the cosmos.

This is the relevance astrology brings to the process of responding to the larger cycles and hierarchical influence. It also facilitates understanding in the application of the doctrine of signatures to each human’s life and, as applied by both Paracelsus and Agrippa Von Nettesheim (1486-1535), provides alchemical information regarding the process of healing.

Despite its controversy, we have to consider the longevity that has been demonstrated by astrology. While its popularity has waxed and waned over the centuries, like the moon, it remains ever present, orbiting the mainstream.1 For this reason alone it deserves consideration as part of the historical, medical, and philosophical milieu of human inquiry.

THE THREE-FOLD NATURE OF HOROSCOPES AND HUMANS

In The Culture of Astronomy, Dietrich posits that cosmic law informs natural law. Cosmic law expresses the inherent order, harmony, and interrelationship of all things. The ancients believed that the heavens were the divine expression and means of communication between humans and their creator. They believed that the human body, created in the image of the cosmic body of the creator, was imbued with divine characteristics.

In her 1894 book The Influence of the Zodiac Upon Human Life, Eleanor Kirk reminded us that the human constitution is three-fold in nature: spirit, soul, body (or father, mother, son), and echo the Hermetic terms objective, subjective, and passive. Within the context of astrology,
these attributes were expressed amongst the three zodiac signs that are assigned to each of the four elements:

Regarding spirit, soul, and body, Kirk states that the mind has power over matter:

. . . there is a mind more interior than the animal mind . . . quickened by the solar fluids or planetary action, for it is the genius of the natural man. And there is a still more interior mind, the spiritual, which is absolute over all earthly or planetary conditions, which glows and continues to ripen the divine human into celestial man.(2)

No one element or single event holds the answer for the state of disease or restoration. Neither can we say that there is only one medical system or “magic bullet” that will provide relief. It is always a combination of factors that culminate to reach a point of extreme (crescendo to use an Italian term in musical notation) as well as the return to cadence (harmonic resolution) and health. Without practice, there remains an inability to recognize warning signs (symptoms in body or mind) that help one tune into the body as an instrument built for change.
Jennifer T. Gehl

“In The Science of Planetary Signatures in Medicine, Jennifer Gehl illuminates connections among elements of astrology, math, history, music and sound, alchemy, quantum science, and principles of Chinese medicine. From the I Ching and the works of Pythagoras and Plato to Nassim Haramein, Jennifer guides her reader through the science and philosophy of the unified cosmos. Masterfully written and extraordinarily readable, this book is a must-read.”

“Jennifer Gehl’s book is brilliant. I can hardly wait to share it with everyone I know! The title might suggest it’s just for healers—it’s not. It is for all seekers. In it you will discover the bridges from the ancient knowing to the present scientific understanding. Any seeker who is looking for the connections between sacred geometry, ancient wisdom, and modern scientific discovery will absolutely love this book—it is a treasure trove of research and where they intersect. I suspect it will become a classic like many other books, referred to again and again to understand something new or old.”

“Jennifer Gehl takes us on a tour through history. Visiting a wide variety of cultures, systems, philosophers, and thinkers, an underlying thread is unmistakable. We are connected to all of nature, including and especially, the planetary energies of our solar system. Astrology can and does play a central role in all of life, including the healing arts. In The Science of Planetary Signatures in Medicine, we have the basic premise elucidated with striking clarity: There is an order to the universe. What we do with this realization is up to us. How might we integrate astrology and nature’s intelligence into 21st-century healing arts? That is the task before us, and this book is an excellent guide for all of us.”

– Eric Meyers, author of The Astrology of Awakening

“The Science of Planetary Signatures in Medicine will surprise you as a comprehensive and beautifully written text. It offers a strong measure of historical and scientific background while remaining crystal clear and intriguing. Gehl embraces the beauty of music as she draws out the mathematical roots of music theory and lays out its integral connection to the planet and universal laws at play. As an example, we get to explore with the author how the principles of harmonics in music apply to other vibratory phenomena in the universe. The book is a lucid, scholastic exploration that every practitioner will want and will use. It will be hard not to devour every concept on the first read . . . it will continue to serve as an excellent, authoritative reference for years to come!”

“Jennifer Gehl synthesizes cosmology, history, philosophy, mathematics, music, and physics. She applies these perspectives in a way that expands our knowledge of these disciplines in relationship to healing. Ultimately the connection between sound healing and physics is presented. Healers of all disciplines, and particularly Acutonics practitioners, will find connections that develop the conversation surrounding many of the principles involved in healing.”

The Science of Planetary Signatures in Medicine

Restoring the Cosmic Foundations of Healing