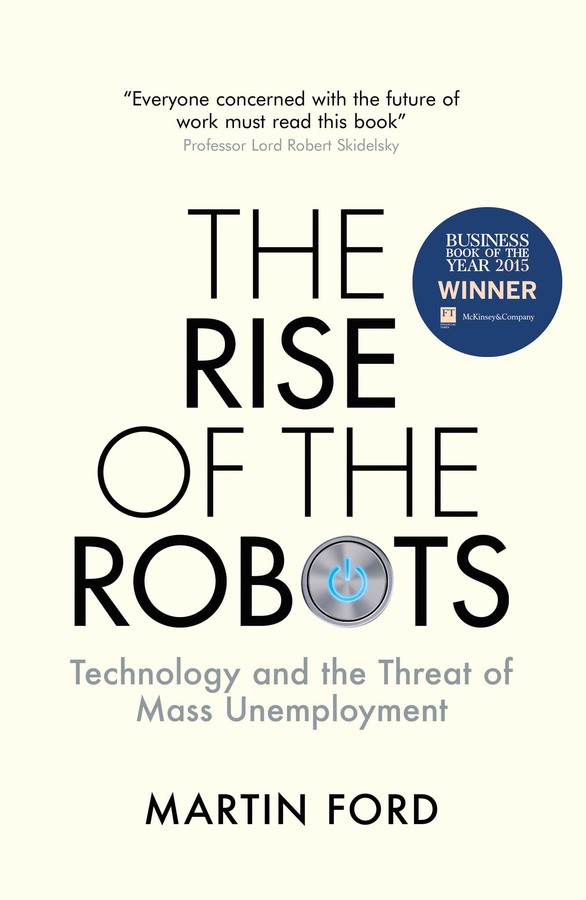 The Rise of the Robots

FT and McKinsey Business Book of the Year

Intelligent algorithms are already well on their way to making white collar jobs obsolete: travel agents, data-analysts, and paralegals are currently in the firing line. In the near future, doctors, taxi-drivers and ironically even computer programmers are poised to be replaced by ‘robots’. Without a radical reassessment of our economic and political structures, we risk the very implosion of the capitalist economy itself.

In The Rise of the Robots, technology expert Martin Ford systematically outlines the achievements of artificial intelligence and uses a wealth of economic data to illustrate the terrifying societal implications. From health and education to finance and technology, his warning is stark – all jobs that are on some level routine are likely to eventually be automated, resulting in the death of traditional careers and a hollowed-out middle class. The robots are coming and we have to decide – now – whether the future will bring prosperity or catastrophe.

'Ford paints his prediction that "the robots are coming" with certainty and his case is backed up by significant research'.

'The Rise of the Robots should come with a warning sticker saying: "This books will provoke a lot of soul-searching"'.

'What Ford does well…is take that deep-set historical techno fear, unpack it and play it back to us on the intellectual big screen, magnified and with plenty of hard-hitting stats thrown in to boost the special effects and make sure the volume is turned up to 11'.

'Alarming... surreal... it is time to be afraid, very afraid... For the moment there is no hope that the rise of the robots will not be accompanied by the fall of the humans'

‘Perhaps the clearest example of genre-hopping to be found in 2015 was the boom in books by journalists and technology writers on what has long been one of the central concerns of science fiction: the implications of artificial intelligence and automation… Few captured the mood as well as Martin Ford in The Rise of the Robots... which painted a bleak picture of the upheavals that would come as ever-greater numbers of even highly skilled workers were displaced by machines.’

'Frightening and important...the more people that read it, the better for all of us'.

'Packed with irresistible gee-whizz facts but...also anxious about what might happen next, especially to human employment...well worth reading'.

“Everyone concerned with the future of work must read this book.”

– Lord Robert Skidelsky, Emeritus Professor of Political Economy at the University of Warwick

“[The Rise of the Robots is] about as scary as the title suggests. It’s not science fiction, but rather a vision (almost) of economic Armageddon.”

“A fascinating journey into the near future world of unemployment. Ford issues a stark warning that automation in the form of robotics is moving beyond the menial jobs to put the rest of us out of work. Read it now before it is too late.”

“Lucid, comprehensive and unafraid to grapple fairly with those who dispute Ford’s basic thesis, Rise of the Robots is an indispensable contribution to a long-running argument.”

“Finally someone is addressing this important topic that has both a grasp on the economic issues and a grounded understanding of what AI and robotics technology is really capable of now and in the near future. This is combined with a clarity of explanation that can help anyone understand the significant societal changes that will soon be upon us.”

‘The real existential threat of AI is not biological extinction but philosophical identity, as even (or perhaps especially) humanity’s greatest thinkers have to come to terms with the fact that their abilities can be not only understood, but replicated in machines. Martin Ford addresses this new reality with exceptional insight and clarity. He doesn’t shy away from recognizing the many positive outcomes of intelligent technology, while exposing the negative consequences of the very real impacts our society is already experiencing.’

“As Martin Ford documents in Rise of the Robots, the job-eating maw of technology now threatens even the nimblest and most expensively educated...the human consequences of robotization are already upon us, and skillfully chronicled here.”

“Mr. Ford lucidly sets out myriad examples of how focused applications of versatile machines (coupled with human helpers where necessary) could displace or de-skill many jobs… His answer to a sharp decline in employment is a guaranteed basic income, a safety net that he suggests would both cushion the effect on the newly unemployable and encourage entrepreneurship among those creative enough to make a new way for themselves. This is a drastic prescription for the ills of modern industrialization—ills whose severity and very existence are hotly contested. Rise of the Robots provides a compelling case that they are real, even if its more dire predictions are harder to accept.”

“Compelling and well-written… In his conception, the answer is a combination of short-term policies and longer-term initiatives, one of which is a radical idea that may gain some purchase among gloomier techno-profits: a guaranteed income for all citizens. If that stirs up controversy, that's the point. The book is both lucid and bold, and certainly a starting point for robust debate about the future of all workers in an age of advancing robotics and looming artificial intelligence systems.”

“In Rise of the Robots, Ford coolly and clearly considers what work is under threat from automation.”

“Speaks with special credibility, insight, and verve. Business people, policy makers, and professionals of all sorts should read this book right away—before the 'bots steal their jobs.”

“Ford offers ideas on changes in social policies, including guaranteed income, to keep our economy humming and prepare ourselves for a more automated future.”

“If the robots are coming for my job (too), then Martin Ford is the person I want on my side, not to fend them off but to construct a better world where we can all—humans and our machines—live more prosperously together. Rise of the Robots goes far beyond the usual fear-mongering punditry to suggest an action plan for a better future.”

– Cathy N. Davidson, Distinguished Professor and Director, The Futures Initiative, The Graduate Center, CUNY and author of Now You See It: How the Brain Science of Attention Will Transform the Way We Live, Work, and Learn

“Martin Ford’s Rise of the Robots is a very important, timely, and well-informed book. Smart machines, artificial intelligence, nanotechnology, and the ‘Internet of things’ are transforming every sector of the economy. Machines can outperform workers in a rapidly widening arc of activities. Will smart machines lead to a world of plenty, leisure, health care, and education for all; or to a world of inequality, mass unemployment, and a war between the haves and have-nots, and between the machines and the workers left behind? Ford doesn’t claim to have all of the answers, but he asks the right questions and offers a highly informed and panoramic view of the debate. This is an excellent book that offers us a sophisticated glimpse into our possible futures.”

– Jeffrey D. Sachs, Director of the Earth Institute, Columbia University and author of The Age of Sustainable Development

“A careful and courageous examination of automation and its possible impact on society.”

“Of all the moderns who have written on automation and rising joblessness, Martin Ford is the original. The Rise of the Robots is self-recommending.”

“It's not easy to accept, but it's true. Education and hard work will no longer guarantee success for huge numbers of people as technology advances. The time for denial is over. Now it's time to consider solutions and there are very few proposals on the table. Rise of the Robots presents one idea, the basic income model, with clarity and force. No one who cares about the future of human dignity can afford to skip this book.”

– Jaron Lanier, author of You Are Not a Gadget and Who Owns the Future?

The Rise of the Robots

FT and McKinsey Business Book of the Year