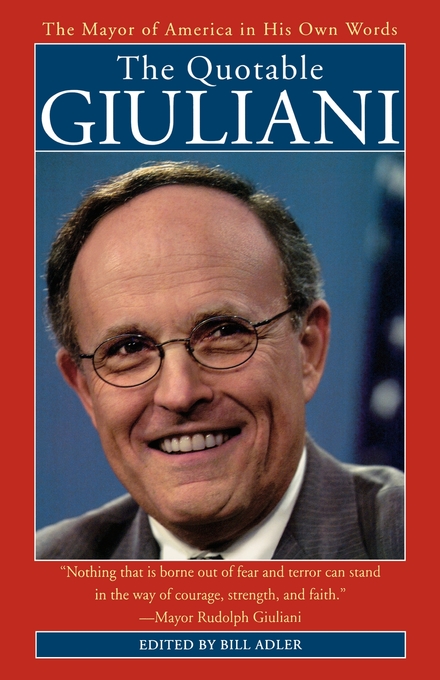 The Mayor of America in His Own Words

"If you've got a problem with New York City
being the capital of the world,
take it up with the Pope."
As the mayor of New York City, Rudolph Giuliani was as controversial as he was determined to revitalize "the greatest city in the world." Never one to pull punches, he did things the way they had to be done, not the way everyone else thought they should be done.
But during the chaotic aftermath of the Sept. 11, 2001, terrorist attack on the World Trade Center, Giuliani's courageous actions and bold decisiveness propelled him from his place as the leader of a city under siege to the beloved Mayor of America. On that day and for many days afterward, he stood up and spoke with strength and compassion -- and for that he will be remembered by not only New Yorkers, but all Americans.
Now, in his own words, readers can experience the wisdom, inspiration, and genuine "New Yawk" attitude that have brought Rudolph Giuliani from the tough streets of Brooklyn to the carnage of Ground Zero and into the annals of history.

Chapter 1: The Morning of September 11

Giuliani was having breakfast at the Peninsula Hotel on Fifth Avenue in midtown Manhattan on the morning of September 11 when his aide Dennison Young, Jr., received the phone call that the World Trade Center had been attacked. Giuliani remembers:

* My first thought is sort of a rejection: How could this happen? Airplanes don't hit the World Trade Center. What are we talking about?

* How could anyone do this to my city?

Shortly after arriving at the disaster site, the mayor recounts the tragedy he witnessed.

* I get the first real view of the building and see that, no matter how it was described, it's much worse. The top of the building is totally in flames. I look up, and for some reason my eye catches the top of the World Trade Center, and I see a man jump -- it must have been at least one hundred stories up....When I look around, what I see is something close to a nuclear bomb. I see dark smoke.

On arriving at the World Trade Center collapse:

* Just pray to God that we can save a few people.

Recounting his route to safety:

* We were on a ground floor that had windows and you could look outside. All of a sudden, it became black, and then white. And things were pelting down. I heard things hitting the building. We went down to the basement to exit. We tried one exit. It was locked. We tried another exit. That was locked. And then [a security guard] decided to come back upstairs. He said, "There's an exit upstairs. We can go out through the upstairs area." When we came upstairs, back into the area we had been in originally, things had gotten worse. There was smoke outside; it was much heavier. There was much more debris falling. And the exit on the main floor was closed. A security guard then came up to us and said, "I think we can go out through the adjoining building. I think that's open." So we all went back downstairs, tried another exit. That didn't work. And then, finally, he went to an exit and he opened it. And we walked through into the lobby of 100 Park Place, which is an adjoining building that faces east. When that door opened, I think all of us breathed a sigh of relief, although when we got into the lobby, I wasn't sure we were better off, because when we looked outside, it looked like Armageddon. It was black and white, and there was no visibility at all.

To Police Commissioner Bernard Kerik on the morning of September 11:

* How the hell did they get the Pentagon?

At the base of the World Trade Center moments before the towers collapsed, Giuliani encountered New York City Fire Department Chaplain and close friend Father Mychal Judge, one of the first killed in the collapse while administering last rites to a firefighter.

"I always do," assured Judge.

Soon after, Judge was killed by debris after removing his hat to pray. Giuliani later said of Judge, "He was a saint, a wonderful man."

* I've never seen anything like this. I was there from shortly after it happened and saw people jumping out of the World Trade Center. It's a horrible, horrible situation, and...every resource that we have is attempting to rescue as many people as possible. And the end result is going to be some horrendous number of lives lost. I don't think we know yet, but right now we have to just focus on saving as many people as possible.

* It was the most horrific scene I've ever seen in my whole life. We saw the World Trade Center in flames, a big, gaping hole all the way to the top of it.

* I think what horrifies me the most is that moments after the attack you saw people jumping out of the window. It's an image that I keep getting...that I saw a man jumping out of the top of the World Trade Center, just hurl himself out the window and come down a...hundred floors. When I saw that...I said to myself, "We are in something now that is totally different than anything that we've ever imagined before."

On being asked by ABC News's Barbara Walters in the days after the attacks to recount his most "searing" memories of September 11:

* I don't even know what comes first. Seeing a man jumping from the top of the World Trade Center, being trapped for a while...in the basement, being told that the World Trade Center was collapsing, which was something you couldn't possibly believe would happen. Hearing an airplane overhead, and first having someone yell out, "There's another airplane attacking," and then have someone else say, "It's one of ours." Going to the morgue now and seeing what they're going through, or to the site where people there are just hoping and hoping and hoping that they're going to find some...people that are alive, with the hope of that diminishing.

On being asked by Barbara Walters if he thought he was going to die on the morning of September 11:

* Now I do, when I think back on it. That night and the next day, now when I think back on it, I realize that we were in a lot of danger. But at the time, there really wasn't time to think about it. And I don't think until we walked out into the Park Place building -- I don't think I realized how bad it was...We were right behind 7 World Trade Center. And 7 World Trade Center absorbed the biggest hit from the fallen building, and probably saved our life.

On being asked in a September 11 press conference what went through his mind as he was trying to escape to safety earlier that morning:

* I don't think anything went through my mind, other than making sure that we all remained calm and found an exit and just tried to figure out the most intelligent thing to do, probably the same thing that went through the minds of ten thousand other New Yorkers who I could see on the streets.

Giuliani became the voice of the nation as the Secret Service rushed to assure President Bush's safety at a secure location. Giuliani was both fierce at the terror attack and comforting to a nation in mourning. In a September 11 press conference, Giuliani addressed the nation and became the "Mayor of America."

* And we will strive now very hard to save as many people as possible, and to send a message that the city of New York and the United States of America is much stronger than any group of barbaric terrorists; that our democracy, that our rule of law, that our strength and our willingness to defend ourselves will ultimately prevail.

* This is a tragedy that we thought would never happen.

* The city is going to survive. We're going to get through it. It's going to be a very difficult time. I don't think we yet know the pain we're going to feel when we find out who we lost. But the thing we have to focus on now is getting the city through this and surviving and being stronger for it.

* Nobody should blame any group of people or any nationality or any ethnic group.

* If you really want to know what New Yorkers are all about, you just watch the way in which they handled themselves. They didn't panic. They moved deliberately. They moved swiftly. But they didn't hurt each other; they helped each other. I mean, these are just the most wonderful people in the world.

* This is a vicious, unprovoked, horrible attack on innocent men, women, and children. It's one of the most heinous acts certainly in world history.

* I believe that the people in New York City can demonstrate our resolve and our support for all of the people that were viciously attacked today by going about their lives and showing everyone that vicious, cowardly terrorists can't stop us from being a free country and a place that functions. And we'll do everything we can to make that point.

* And I want the people of New York to be an example to the rest of the country and the rest of the world, that terrorism can't stop us. American democracy is much stronger than vicious, cowardly terrorists, and we're going to overcome this.

* And as the governor said and I said to the president, we fully and completely support him in any action that he has to take in order to make an example out of the people who are responsible for this.

Bill Adler is the editor and author of several New York Times bestsellers, including The Kennedy Wit. His books have sold millions of copies all over the world. Other quote books by Bill Adler include collections about Oprah Winfrey, Princess Diana, Bill Cosby, David Letterman, Jay Leno, Ronald Reagan, Bill Clinton, Bill Gates, and Warren Buffett.

The Mayor of America in His Own Words