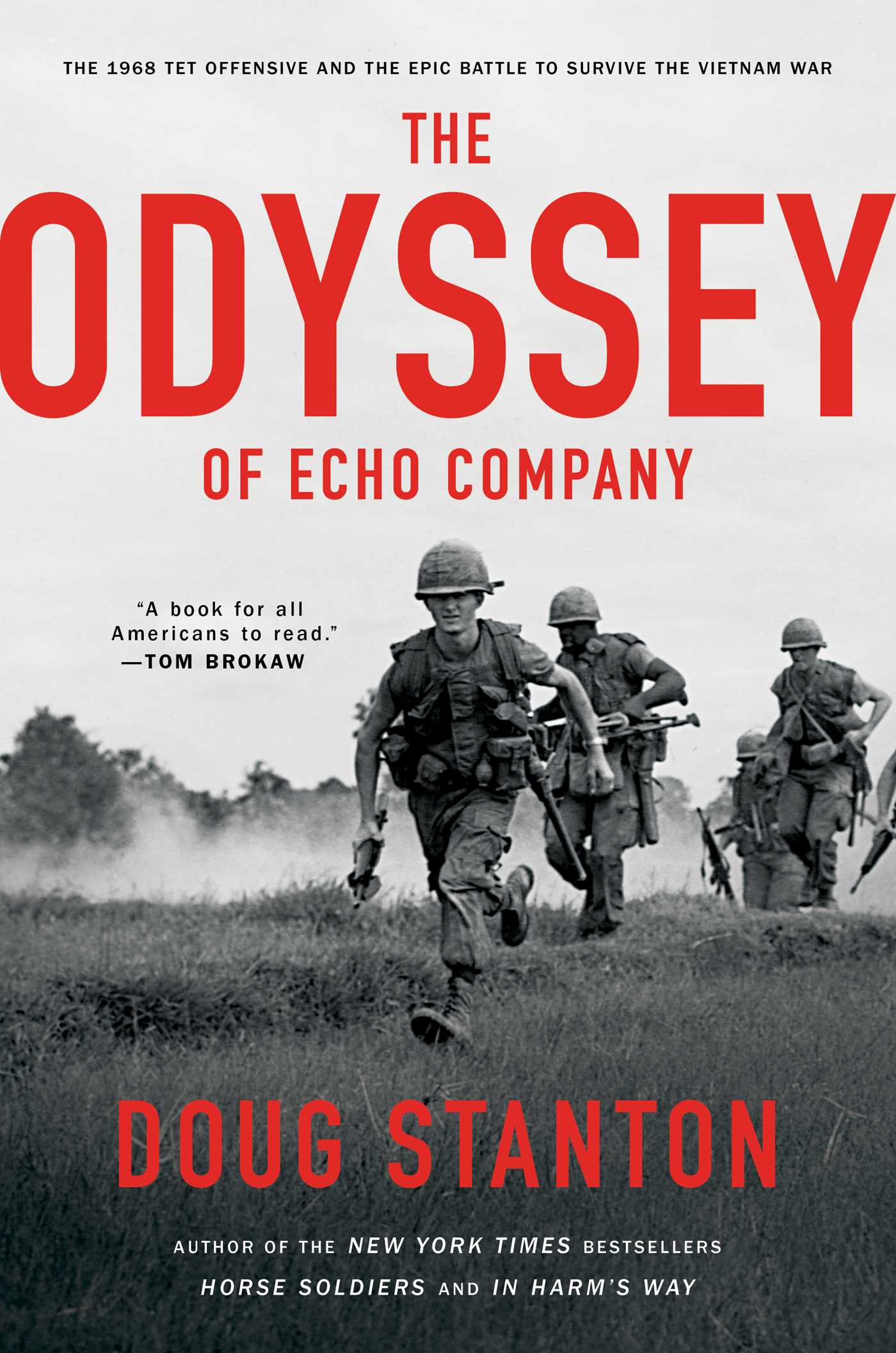 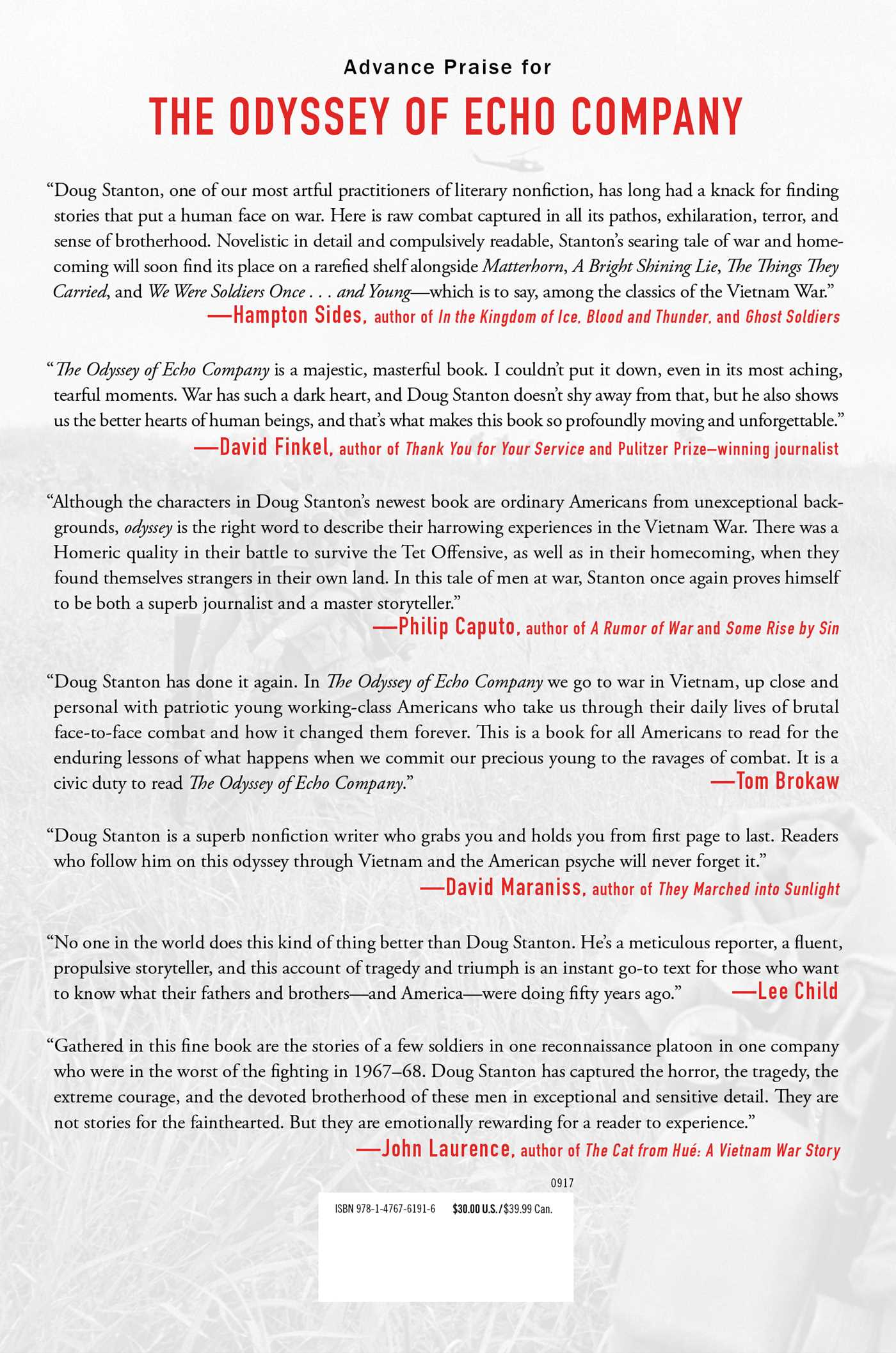 The Odyssey of Echo Company

By Doug Stanton
LIST PRICE £20.00
PRICE MAY VARY BY RETAILER

A powerful work of literary military history from the New York Times bestselling author of In Harm’s Way and Horse Soldiers, the harrowing, redemptive, and utterly unforgettable account of an American army reconnaissance platoon’s fight for survival during the Vietnam War—whose searing experiences reverberate today among the millions of American families touched by this war.

On a single night, January 31, 1968, as many as 100,000 soldiers in the North Vietnamese Army attacked thirty-six cities throughout South Vietnam, hoping to topple the government and dislodge American forces. Forty young American soldiers of an army reconnaissance platoon (Echo Company, 1/501) of the 101st Airborne Division and hailing from small farms, beach towns, and such big cities as Chicago and Los Angeles are suddenly thrust into savage combat, having been in-country only a few weeks. Their battles against both North Vietnamese Army soldiers and toughened Viet Cong guerillas are relentless, often hand-to-hand, and waged night and day across landing zones, rice paddies, hamlets, and dense jungle. The exhausting day-to-day existence, which involves ambushes on both sides, grueling gun battles, and heroic rescues of wounded comrades, forges the group into a lifelong brotherhood. The Odyssey of Echo Company is about the young men who survived this epic span, and centers on the searing experiences of one of them, Stanley Parker, who is wounded three times during the fighting.

When the young men come home, some encounter a country that doesn’t understand what they have suffered and survived. Many of them fall silent, knowing that few of their countrymen want to hear the remarkable story they have lived to tell—until now. Based on hundreds of hours of interviews, dozens of personal letters written in the combat zone, Pentagon after-action reports, and travel to the battle sites with some of the soldiers (who meet their Vietnamese counterpart), and augmented by detailed maps and remarkable combat zone photographs, The Odyssey of Echo Company breaks through the wall of time to recount ordinary young American men in an extraordinary time in America and confirms Doug Stanton’s prominence as an unparalleled storyteller of our age.

Doug Stanton is the author of the New York Times bestsellers In Harm’s Way: The Sinking of the USS Indianapolis and the Extraordinary Story of Its Survivors and Horse Soldiers: The Extraordinary Story of a Band of US Soldiers Who Rode to Victory in Afghanistan, which is the basis for a Jerry Bruckheimer–produced movie by the same name, starring Chris Hemsworth and Michael Shannon, to be released by Warner Bros. in 2018. He attended Hampshire College and the University of Iowa Writers’ Workshop. His writing has appeared in The New York Times, The New York Times Book Review, Time, The Washington Post, Men’s Journal, The Daily Beast, Newsweek, Esquire, and Outside, where he has been a contributing editor. Stanton is a founder of the National Writers Series, a year-round book festival, and lives in his hometown of Traverse City, Michigan, with his wife, Anne Stanton, and their three children, John, Katherine, and Will.

“Doug Stanton, one of our most artful practitioners of literary nonfiction, has long had a knack for finding stories that put a human face on war. Here is raw combat captured in all its pathos, exhilaration, terror, and sense of brotherhood. Novelistic in detail and compulsively readable, Stanton’s searing tale of war and home­coming will soon find its place on a rarefied shelf alongside Matterhorn, A Bright Shining Lie, The Things They Carried, and We Were Soldiers Once . . . and Young—which is to say, among the classics of the Vietnam War.” —Hampton Sides, author of The Kingdom of Ice, Blood and Thunder, and Ghost Soldiers

"From harrowing scenes of battle to those of heart-rending tenderness, I felt I’d joined the young paratroopers of Echo Company in their journey through the Tet Offensive of 1968. Doug Stanton writes about the personal for the millions. It’s an amazing story of a group of young men who lived history.” —Karl Marlantes, author of Matterhorn

“The Odyssey of Echo Company is a majestic, masterful book. I couldn’t put it down, even in its most aching, tearful moments. War has such a dark heart, and Doug Stanton doesn’t shy away from that, but he also shows us the better hearts of human beings, and that’s what makes this book so profoundly moving and unforgettable.” —David Finkel, author of Thank You for Your Service and Pulitzer Prize–winning journalist

“Although the characters in Doug Stanton’s newest book are ordinary Americans from unexceptional back­grounds, odyssey is the right word to describe their harrowing experiences in the Vietnam War. There was a Homeric quality in their battle to survive the Tet Offensive, as well as in their homecoming, when they found themselves strangers in their own land. In this tale of men at war, Stanton once again proves himself to be both a superb journalist and a master storyteller.” —Philip Caputo, author of A Rumor of War and Some Rise by Sin

“Doug Stanton has done it again. In The Odyssey of Echo Company we go to war in Vietnam, up close and personal with patriotic young working-class Americans who take us through their daily lives of brutal face-to-face combat and how it changed them forever. This is a book for all Americans to read for the enduring lessons of what happens when we commit our precious young to the ravages of combat. It is a civic duty to read The Odyssey of Echo Company.” —Tom Brokaw

“Doug Stanton is a superb nonfiction writer who grabs you and holds you from first page to last. Readers who follow him on this odyssey through Vietnam and the American psyche will never forget it.” —David Maraniss, author of They Marched into Sunlight

“No one in the world does this kind of thing better than Doug Stanton. He’s a meticulous reporter, a fluent, propulsive storyteller, and this account of tragedy and triumph is an instant go-to text for those who want to know what their fathers and brothers—and America—were doing fifty years ago.” —Lee Child

“Gathered in this fine book are the stories of a few soldiers in one reconnaissance platoon in one company who were in the worst of the fighting in 1967–68. Doug Stanton has captured the horror, the tragedy, the extreme courage, and the devoted brotherhood of these men in exceptional and sensitive detail. They are not stories for the fainthearted. But they are emotionally rewarding for a reader to experience.” —John Laurence, author of The Cat from Hue: A Vietnam War Story

“An admiring history of men who fought in the Vietnam War… Stanton does not concern himself with the debates over the war or its legacy; his emphasis is on this group of men and their experiences then and since.” —Kirkus Reviews

“Books like this remind us of the human cost of war and the sacrifices made by soldiers who answered their country’s call.” —New York Journal of Books

“We are finally ready to learn about Vietnam, and no book tells the story better than this one.” —Library Journal, starred review

“Doug Stanton knocked this one out of the park. He has written a powerful story that not only delves into combat but what makes a real warrior. He discusses the intricate home relationships that help to mold soldiers, and their relationships within the unit that produces a cohesive combat unit. This was a page tuner that I couldn’t put down I could feel the emotions of what they were going through. You could feel the tension of the battle and the comradeship of the men involved. I could feel the tension run through my body with each battle. A tremendous book, I highly recommend it.  Like his other two books this was hard to put down.” — Brigadier General (Ret) Remo Butler, U.S. Army Special Forces

The Odyssey of Echo Company

By Doug Stanton
LIST PRICE £20.00
PRICE MAY VARY BY RETAILER