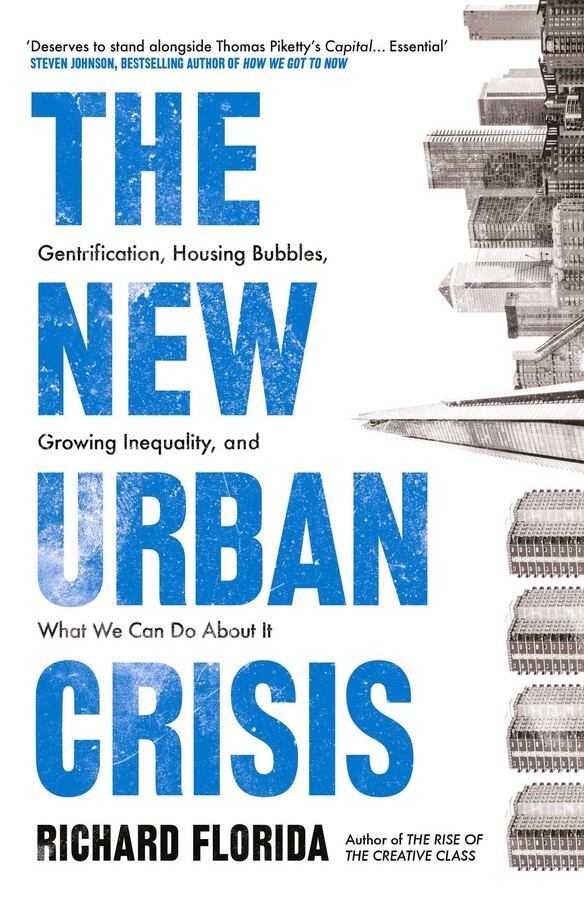 Gentrification, Housing Bubbles, Growing Inequality, and What We Can Do About It

Never before have our cities been as important as they are now. The drivers of innovation and growth, they are essential to the prosperity of nations. But they are also destructive, plunging us into housing crises and deepening inequality. How can we keep the good and break free of the bad?

In this bracingly original work of research and analysis, leading urbanist Richard Florida explores the roots of this new crisis and puts forward a plan to make this the century of the fairer, thriving metropolis.

‘Richard Florida is the great pioneer thinker who first explained how the influx of creative people was reviving cities…[he] takes a hard look at the problems and, as usual, comes up with some smart new policies.’

‘Deserves to stand alongside Thomas Piketty’s Capital as an essential diagnosis of our contemporary ills, and a clear-eyed prescription of how to cure them… Anyone interested in the crisis of inequality and in the vitality of our cities will want to read this book.’

– Steven Johnson, bestselling author of How We Got To Now

‘A powerful account – packed with evidence – of the forces driving urban segregation and deepening inequality and the way private wealth and power outflanks the poor and powerless.’

– Stewart Lansley, author of A Sharing Economy and co-author of Breadline Britain

‘Like the superstar cities it describes, this book is dense, complex and stimulating. Florida’s well-researched and fluent exposé of inequality is a wake-up call to all the major actors engaged in planning, designing and managing cities in the 21st century.’

‘Using data as his torch, Richard Florida shines a light on one of the great challenges of our century.’

‘Bracingly confronts this tension between big-city elites and the urban underclass.’

‘The New Urban Crisis is well worth reading for the original research, clear-headed critique and the skilled analysis of solid data… Florida writes in personally positioned transparent language without taking refuge in academic jargon, making the book accessible to a broad audience.’

‘Cites are engines for prosperity and progress, but it’s essential that the benefits extend far and wide. Florida proposes promising ideas for building stronger cities that offer greater opportunities for all.’

Gentrification, Housing Bubbles, Growing Inequality, and What We Can Do About It