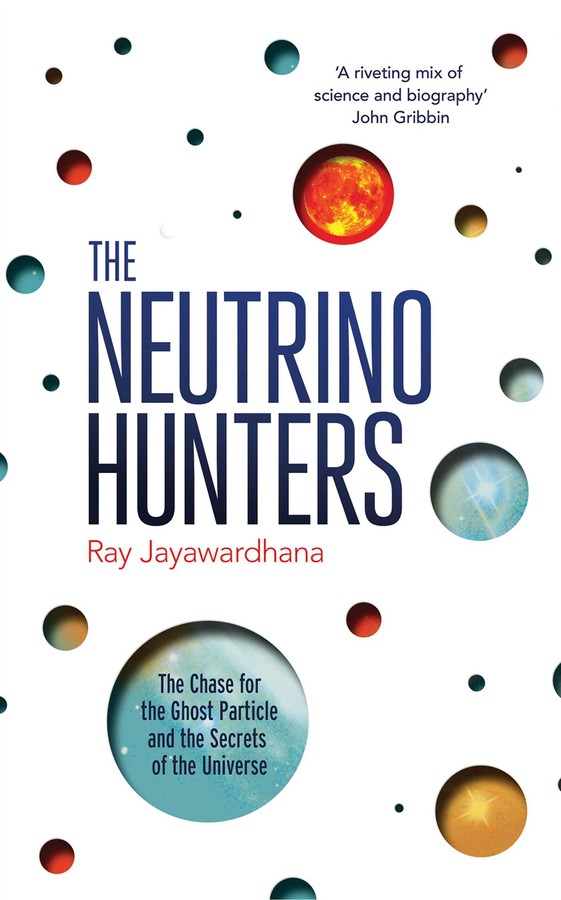 Before the Higgs boson, there was a maddening search for another particle – the ghostly neutrino. First detected in 1956, its fleeting appearances have teased answers to many mysteries: How did the Big Bang happen? Why is antimatter so rare? What might dark matter be made of? And could faster-than-light travel be possible, overturning Einstein’s theory of special relativity?

But the quest for the neutrino also encompasses adventure, from Cold War defections and extra dimensions to mile-deep holes in the Antarctic ice and a troubled genius who disappeared without a trace. With The Neutrino Hunters, renowned astrophysicist Ray Jayawardhana delivers a thrilling detective story of revolutionary science.

Ray Jayawardhana is Professor of Astrophysics at the University of Toronto and recipient of the coveted Radcliffe Fellowship. The author of Strange New Worlds, he has written for New Scientist, Times Higher Education, and others, and his research has made headlines worldwide, including in The Times, The Economist, Sydney Morning Herald, and BBC News.

'The book has received much praise, with its entertaining storytelling by Jayawardhana - an award-winning science writer and celebrated researcher - applauded widely.'

‘An intriguing story, deftly told… with commendable brevity and clarity… comprehensive without being overburdened with detail or weighed down with too much theory… the books’ neat pen portraits of the men and women who tracked down the poltergeist particle give it added depth… A great ghost story and a thumping good piece of science writing rolled into one.’

‘Jayawardhana goes a step further than just tracking the scientific progress made in the neutrino search: he tells a story… paced perfectly, with some very in-depth topics covered in a compelling and easily understandable way… a well-written and gripping history.’

‘Strong on the history… comprehensive.’

'The Neutrino Hunters is a fascinating, comprehensive look at the monumental efforts to detect the least understood particle known to physics. While the Higgs boson might be more famous, Ray Jayawardhana reveals that neutrinos are far more mysterious, and may hold the key to the next breakthroughs in the field.'

– Chad Orzel, author of How to Teach Quantum Physics to Your Dog

'Vividly, colourfully, and humorously captures the often offbeat characters who, over the past century, have pursued one of the most elusive – and significant – mysteries in the history of physics.'

– Richard Panek, author of The 4% Universe

'Everything about neutrinos is fascinating. The various dramas associated with their discovery, our efforts to understand their very weird properties, and finally, what they have taught us about fundamental physics are remarkable. Ray Jayawardhana is the perfect person to convey these exciting stories.'

– Lawrence Krauss, author of The Physics of Star Trek and A Universe from Nothing

'Move over Neil deGrasse Tyson and Brian Greene! Ray Jayawardhana is the new dean of popular science – a working scientist who can explain even the most complex matters in a clear and entertaining way. In Neutrino Hunters, he spins a thrilling tale that takes us from the deepest depths of the Earth to the farthest reaches of the universe. A wonderful read from start to finish.'

'Ray Jayawardhana’s thorough and lucid discussion of ghostly neutrinos whisks readers from subterranean labs and the thermonuclear hearts of stars into profound questions of the universe’s evolution, and why there is something rather than nothing. The Neutrino Hunters is an excellent overview of a vibrant and vital area of research.'

'We are lucky to have Dr Jayawardhana – a first-rate storyteller who also knows the physics inside and out – to guide us through the science and the personalities behind this remarkable story.'

– Dan Falk, author of In Search of Time

'In this richly detailed and nuanced book, scientist and author Ray Jayawardhana captures the incredible story of one of nature’s most ghostly, yet vital ingredients. From the Earth’s core to exploding stars, vanishing scientists, and the very essence of matter in the universe, it’s a wild and immensely satisfying ride.'

'Ray Jayawardhana tells a whopping good ghost story. Beautifully written, Neutrino Hunters paints a vivid portrait of this new astronomy for the 21st century and the fascinating scientists who put it into place.'

– Marcia Bartusiak, author of The Day We Found the Universe

'The Neutrino Hunters is a riveting mix of science and biography, providing both entertainment and painlessly assimilated information. Ray Jayawardhana makes clear that the story is just beginning, as neutrino astronomy is starting to provide new insights into the nature of the Universe.'

– John Gribbin, author of In Search of Schrodinger's Cat