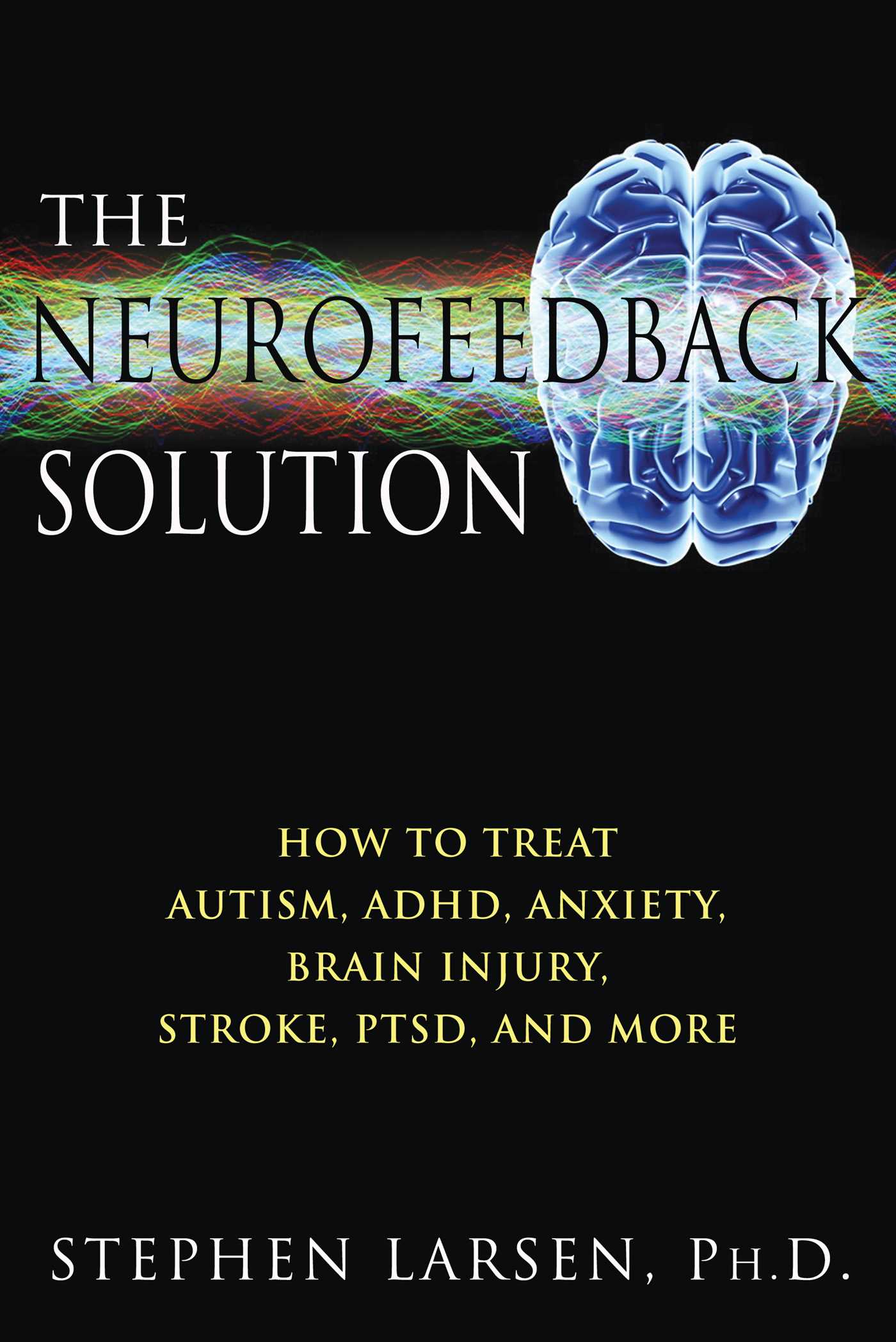 By Stephen Larsen
LIST PRICE £13.99
PRICE MAY VARY BY RETAILER

A guide to neurofeedback for better physical and mental health as well as greater emotional balance, cognitive agility, and creativity

• Explores how to combine neurofeedback with breathwork, mindfulness, meditation, and attention-control exercises such as Open Focus

What is neurofeedback? How does it work? And how can it help me or my family?

In this guide to neurofeedback, psychologist and neurofeedback clinician Stephen Larsen examines the countless benefits of neurofeedback for diagnosing and treating many of the most debilitating and now pervasive psychological and neurological ailments, including autism, ADHD, anxiety, depression, stroke, brain injury, obsessive-compulsive disorder, and post-traumatic stress disorder.

Surveying the work of neurofeedback pioneers, Larsen explains the techniques and advantages of different neurofeedback methods--from the LENS technique and HEG to Z-score training and Slow Cortical Potentials. He reveals evidence of neuroplasticity--the brain’s ability to grow new neurons—and shows how neurofeedback can nourish the aging brain and help treat degenerative conditions such as Alzheimer’s and strokes. Examining the different types of brain waves, he shows how to recognize our own dominant brainwave range and thus learn to exercise control over our mental states. He explains how to combine neurofeedback with breathwork, mindfulness, meditation, and attention-control exercises such as Open Focus. Sharing successful and almost miraculous case studies of neurofeedback patients from a broad range of backgrounds, including veterans and neglected children, this book shows how we can nurture our intimate relationship with the brain, improving emotional, cognitive, and creative flexibility as well as mental health.

The people who bring their children to us have typically exhausted all other resources. They have consulted pediatricians, pediatric neurologists, psychiatrists, or psychologists.

Our first task is to understand the case as completely as we can, including family history, early experiences, the possibility of head injury, the exposure to infectious diseases, Lyme disease, diet and nutrition, and what has already been done, including regimens of medication, and what the child’s reaction to each intervention has been. We may refer the family for a further workup or a neuropsychological evaluation if it seems appropriate. We then do our own diagnostic evaluation including a LENS map, a qEEG, or ideally, both--because each yields different kinds of information.

A course of treatment is then planned based on the child’s unique makeup and sensitivities. The early treatments usually involve a “toe in the water” type approach, in which a fairly conservative treatment intervention is tried and the results carefully evaluated.

A quick initial response to the treatment, the “honeymoon phase” is a wonderful thing, but as we often say, “Don’t worry, it will pass.” Then we settle down for the long, hard work of treating and watching the responses. There will always be ups and downs, because of variables over which we have no control. But the goal is to hold on to the gains as long as possible, and, with the parent as cotherapist in the child’s healing process, to coordinate with other modalities such as behavior therapy or cognitive therapy for learning disabilities, socialization training, etc. Our philosophy is that since the child’s autism is probably not a “single-cause” disorder” there is probably not a single cure. Rather, through mobilizing the child’s central nervous system as an ally rather than an antagonist, all of the other activities and learning opportunities in the child’s life will support the changes being made.

The following is an example of working with an autistic child, Emily.

At four years of age, little Emily is impossibly cute. She is petite, quite a bit smaller than her (fraternal) twin brother, Chris, blonde, and wears tiny wire-rimmed glasses that only she herself may touch. She is still in diapers, not toilet trained, while her brother was trained years ago. When she sees that my office is full of sandplay toys, she is visibly excited. In one corner of the room, behind the couch, I also have beautiful antique Czechoslovakian handmade puppets that are only for older children to play with carefully, but she makes a beeline for these again and again, despite (and likely because of) being told no.

When she is pulled back repeatedly from the only forbidden ones by her parents, she throws a fit, kicking and screaming and rolling on the floor.

“Ah,” I say wisely to the parents, “another practitioner of tantrum yoga,” and the laughter dispels the tension a little.

The first neurofeedback session is quite an ordeal because she is also quick and clever to rip the electrodes off her head as quick as they are put on. Her screams of “no no! NO!” fill the therapy center. Rich and Lola, her devoted parents, are very concerned but determined that she will indeed get a treatment, because they don’t know what else to do--they are at their wit’s end.

Just after birth, Emily and her twin, Christopher, were both healthy and normal. Emily was the “second one out” and quite a bit smaller. As the months of the first year passed, she crept and crawled and soon stood and toddled, as he did. She began to talk, as he did; and then by the end of that year she inexplicably began to slide backward developmentally. He went on to toilet train, she did not; he did interactive play with other children; she did not.

Her parents visited every highly regarded pediatric psychiatrist and neurologist up and down the East Coast. Finally an entire team of therapists at a Connecticut center confirms the terrifying word they have been hearing at almost every place they have been: autism!

When she comes to see me, Emily’s mood is quite unstable; she is restless, easily frustrated, highly willful. It will take us months of treatment to make an initial brain map, as I am using the “stim” map because I suspect seizure activity to be present. When we finally obtain one, the amplitudes and standard deviations are “off the charts.”

On the subjective symptom rating scale, Emily has “10s” in the categories we will be tracking during treatment: mood instability, no language, no cooperative play, no toilet training, willfulness (followed by a tantrum when restrained or denied in any way). She does not make eye contact with adults and ignores questions or instructions that are offered to her. There is also a visual category given by her opthalmologist: strabismus, where the eyes often wander independently of each other and will not track or focus together.

Course of Treatments and Cotreatments

After fifty-six sessions spread over three years, in conjunction with other therapeutic modalities, reports begin coming back from her school and play sessions that Emily is making more eye contact, saying more words than No! In classroom settings she joins activities rather than sitting apart.

Emily’s parents and I both notice it is easier to get her in the chair; her tantrums are a little shorter and seem more manageable. She selects sandplay objects more carefully and seems to be developing themes around her play. She is asking for things by name, or pointing at objects and saying their names.

By January 2009 Emily is putting together more words and sentences. She names people. She hears the word “pink” and is able to spell it. She is able to say what she wants. Toilet training is “almost complete.” She can dress herself and write her name. In February she wins “student of the month,” and her picture appears in the school newspaper.

Stephen Larsen, Ph.D., LMHC, BCIA-eeg, is professor emeritus of psychology at SUNY Ulster, board-certified in EEG biofeedback, and the author of several books, including The Healing Power of Neurofeedback and The Fundamentalist Mind. He is the founder and director of Stone Mountain Center, offering biofeedback, neurofeedback, and psychotherapy treatments. He lives in New Paltz, New York.

“Clearly written and exciting in scope. The contributors assembled here represent the ‘who’s who’ in research-based neurofeedback. They pioneered the use of sophisticated technology and developed effective protocols to treat a variety of disorders.”

– Len Ochs, Ph.D., founder of Ochslabs and the LENS technique

“The brain can do far more for itself than drugs or other invasions, and the possibilities and realities are brought forth herein. The wisdom to selfregulate is contained in every brain. Larsen introduces a host of pioneers who are forging the future in this important emerging discipline.”

“Stephen Larsen has done an amazing job of pulling together state-of-the-art neurofeedback treatments into an easy-to-read book that will be useful to experts in the field as well as the general public. Those already doing neurofeedback as well as those with no background at all can learn from this book.”

“Sharing successful and almost miraculous case studies of neurofeedback patients from a broad range of backgrounds, including veterans and neglected children, this book reveals how we can nurture our intimate relationship with the brain, improving emotional, cognitive and creative flexibility, as well as mental health.”

“An essential tool for mind-brain science.”

“A brilliant book, full of amazing stories and cogent explanations.”

By Stephen Larsen
LIST PRICE £13.99
PRICE MAY VARY BY RETAILER