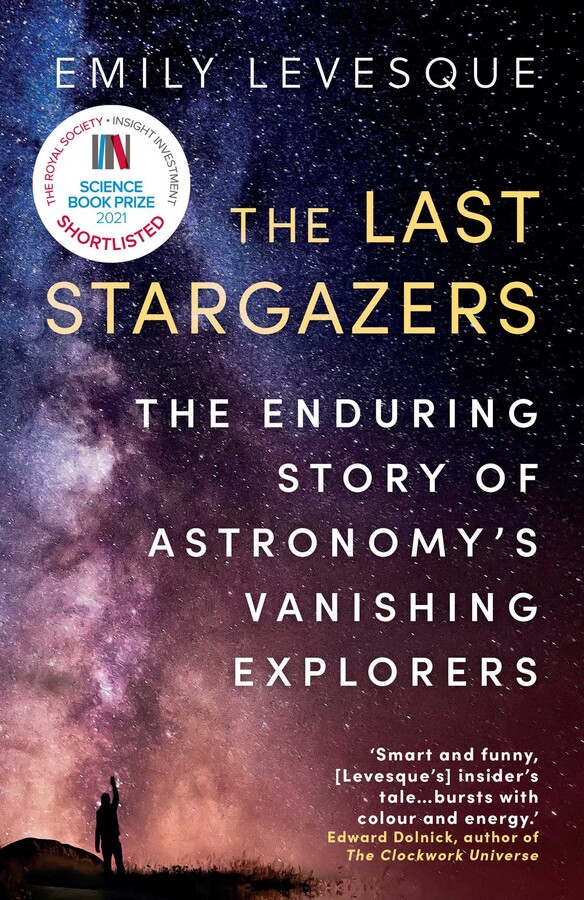 To be an astronomer is to journey to some of the most inaccessible parts of the globe, braving mountain passes, sub-zero temperatures, and hostile flora and fauna.

Not to mention the stress of handling equipment worth millions. It is a life of unique delights and absurdities … and one that may be drawing to a close. Since Galileo first pointed his telescope at the heavens, astronomy has stood as a fount of human creativity and discovery, but soon it will be the robots gazing at the sky while we are left to sift through the data.

In The Last Stargazers, Emily Levesque reveals the hidden world of the professional astronomer. She celebrates an era of ingenuity and curiosity, and asks us to think twice before we cast aside our sense of wonder at the universe.

‘The awesome endeavours and intellectual adventures in the physical practice and gains in understanding that are the heart and passion of astronomers is gloriously portrayed from the mind of a wonderful practitioner, Emily Levesque.

Her range of experiences and insights through the recent period of rapid developments and future planning in this progressive human effort gloriously reach out to everyone.’

‘The Last Stargazers is perfect for anyone who has ever wondered what it’s like to actually be an astronomer, or who has dreamt of staring up at the stars. Amidst the stories of mishaps and mistakes is a surprisingly romantic view of the glory of exploration, taken one dark night at a time.’

‘If you’ve ever wondered what astronomers do—what they really do—and the human journey from the era of eyepieces to gigantic robotic cameras, The Last Stargazers puts you there with compelling honesty, following the scientists and students with hundred-ton telescopes as backdrop.’

– Erik Asphaug, author of When the Earth Had Two Moons

‘Through captivating stories, Levesque gives us both a vivid and accessible inside look at the enigmatic mountain-top astronomers. A unique and engaging read.’

‘Emily Levesque is smart and funny, and her insider’s tale of stars and the astronomers who study them bursts with color and energy.’

‘Emily’s book is a compulsive read. It demonstrates what being an observational astronomer is really like—the highs, the lows, and the unscheduled things that can happen at telescopes around the world! Give this book to every young person (especially the girls!) that you know who likes math and science.’

‘Astronomy is dangerous. Wild (sometimes venomous) animals, thin air, heavy equipment, hazardous chemicals… Dr. Levesque captures all this with amusement and personal experience, making this a delightful read for everyone.’

‘Emily Levesque depicts the adventurous life of professional hands-on astronomers, from the top of the Andes, Chile through the Arizona cliffs to Big Island, Hawaii, telling stories of the cosmic silence of an observing night. … I have hugely enjoyed this book. It is engaging, humorous, full of quotes and stories of well-reputed colleagues. To be read, before all astronomical observations become fully automatized!’

‘This will particularly appeal to young women interested in science, but any stargazer would enjoy this joyous adventure through modern astronomy.’

‘It’s like catching a glimpse of the magic behind the curtain galaxies away, and leaves you hanging on every spectacular word. A must read for anyone who has looked up at the sky and felt a sense of wonder, as well as those considering the world of astrophysics and astronomy.’

– Tamara Robertson, host of Mythbusters: The Search and STEM speaker

‘The perfect primer for a future astronomer or an amateur astronomy buff, it captures the highlights, lowlights, and day-to-day life of the professional stargazer.’

‘Childhood stargazers who’ve since become inquisitive adults, and any fans of Sagan’s Cosmos, will devour this book.’

‘Entertaining, ardent tales from an era of stargazing that may not last much longer.’

‘Levesque does a wonderful job explaining the science behind astronomy as she conveys the awe and beauty of the universe, the dedication of the people who study it, and the excitement of discovery in this fascinating account that will appeal to fans of narrative nonfiction and fellow stargazers.’

‘Levesque writes with great energy, bringing the world of the astronomers to life… this book does do what most astronomy books do not. It puts you in the world of practising astronomers and lets you imagine what a career as an observer would be like.’

‘An insightful view of the daily (and often nightly) regime of the modern observational astronomer. The passion, adventure, challenge, humour and, yes, danger, in the pursuit of knowledge are palpably brought to life… a must-read for the uninitiated, the armchair stargazer, or anyone contemplating a career in astronomical research: a funny, romantic, intriguing real-life adventure.’

‘[Levesque] sweeps the reader along with her in this very humorous and accessible book. As I was reading, I kept thinking of how many people I know who would love to read it. A perfect gift for anyone interested in astronomy… From Galileo to gravitational waves, pulsars, or black holes, it’s compulsive reading, written in an easy, chatty style… A beautiful book sharing her love of the wonders of the universe.’

‘Astronomer Emily Levesque shares stories of modern-day stargazers in this fascinating new release, profiling people willing to traverse mountaintops and the most remote areas of the world, all in the name of science. There’s something for everyone in here, from the world’s most powerful telescopes to wild bears running loose in an observatory—recommended for anyone who enjoys gazing upward at the night sky.’