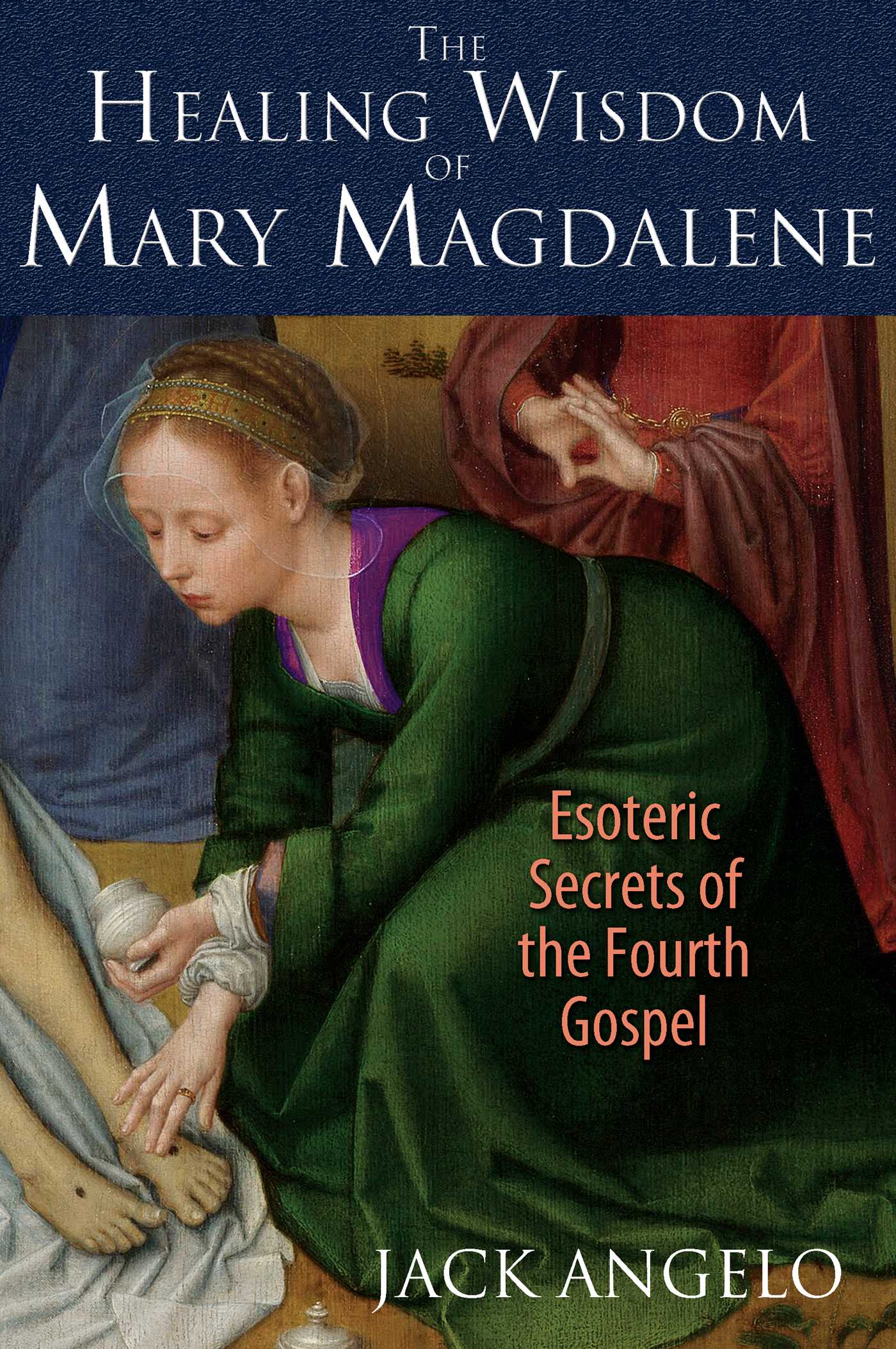 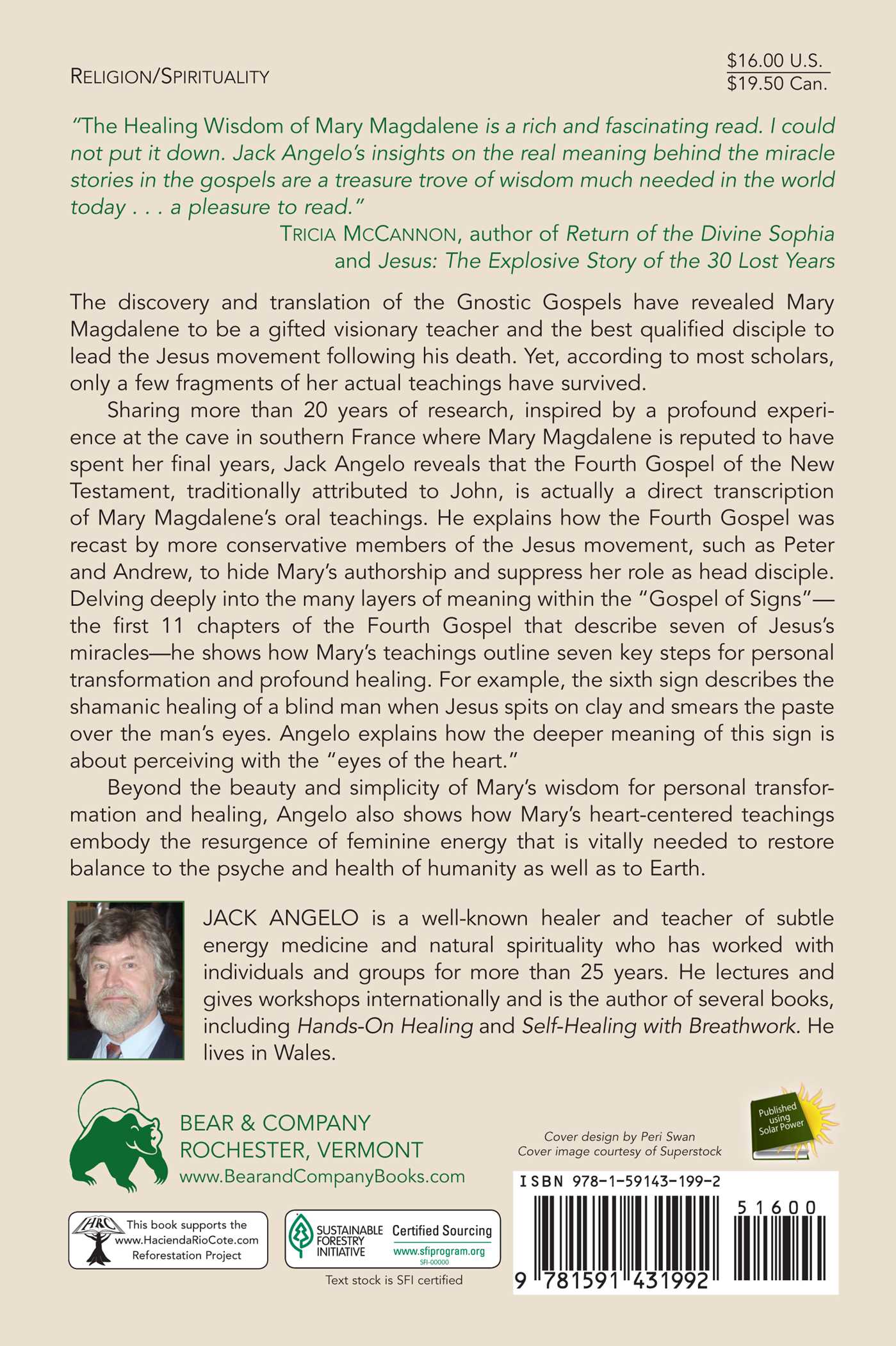 The Healing Wisdom of Mary Magdalene

Esoteric Secrets of the Fourth Gospel

The discovery and translation of the Gnostic Gospels have revealed Mary Magdalene to be a gifted visionary teacher and the best qualified disciple to lead the Jesus movement following his death. Yet, according to most scholars, only a few fragments of her actual teachings have survived.

Sharing more than 20 years of research, inspired by a profound experience at the cave in southern France where Mary Magdalene is reputed to have spent her final years, Jack Angelo reveals that the Fourth Gospel of the New Testament, traditionally attributed to John, is actually a direct transcription of Mary Magdalene's oral teachings. He explains how the Fourth Gospel was recast by more conservative members of the Jesus movement, such as Peter and Andrew, to hide Mary's authorship and suppress her role as head disciple. Delving deeply into the many layers of meaning within the "Gospel of Signs"--the first 11 chapters of the Fourth Gospel which describe seven of Jesus' miracles--he shows how Mary's teachings outline seven key steps for personal transformation and profound healing. For example, the sixth sign describes the shamanic healing of a blind man when Jesus spits on clay and smears the paste over the man's eyes. Angelo explains how the deeper meaning of this sign is about perceiving with the "eyes of the heart."

Beyond the beauty and simplicity of Mary's wisdom for personal transformation and healing, Angelo also shows how Mary's heart-centered teachings embody the resurgence of feminine energy that is vitally needed to restore balance to the psyche and health of humanity as well as to Earth.

Our dreams are often like riddles, in the same way that illness and distress of the body, mind, or emotions can seem like riddles. The riddle cannot be solved by thinking alone. We need to somehow “think” with the heart and call upon the wisdom of the soul for a solution. Connection with the soul draws the core affliction into our consciousness, bringing both the affliction and the encounter with the sacred out of the darkness of the unconscious into the light of awareness. This is what is going to happen in the next episode of Maryam’s story.

(John 4:43–54) When the two days were over, he went from that place to Galilee (for Jesus himself had testified that a prophet has no honor in the prophet’s own country). When he came to Galilee, the Galileans welcomed him, since they had seen all that he had done in Jerusalem at the festival; for they too had gone to the festival. Then he came again to Cana in Galilee where he had changed the water into wine. Now there was a royal official whose son lay ill in Capernaum. When he heard that Jesus had come from Judea to Galilee, he went and begged him to come down and heal his son, for he was at the point of death. Then Jesus said to him, “Unless you see signs and wonders you will not believe.” The official said to him, “Sir, come down before my little boy dies.” Jesus said to him, “Go; your son will live.” The man believed the word that Jesus spoke to him and started on his way. As he was going down, his slaves met him and told him that his child was alive. So he asked them the hour when he began to recover, and they said to him, “Yesterday at one in the afternoon the fever left him.” The father realized that this was the hour when Jesus had said to him, “Your son will live.” So he himself believed, along with his whole household. Now this was the second sign that Jesus did after coming from Judea to Galilee.

Like many traveling healers of the time, Yeshua can heal at a distance. But he is sorry that some people only turn to him for help when they are in trouble. They want the healing but they do not want the spiritual message that healing conveys. Yeshua knows that healing is always possible because we are all One. He also shows the followers that their healing ministry can include working at a distance. The healer never discriminates and, in this healing modality, time and distance are no objects. The love of the Holy One falls, like rain, on everyone, no matter what their role in life might be. Maryam has alerted us with her signal, the word sign. It is time to ponder why this dream of distant healing occurs at this place on our journey.

You, the Distant Healer

Perhaps you may be asked to heal at a distance. You know that it is possible. Traditionally, the apprentice must learn about and practice distant healing before attempting “hands-on” work. Mastery of this form develops confidence as well as demonstrating profound truths about the nature of healing energies. The state of nonduality, as discovered in Sign One, means that you and the person needing your help are one. This is what makes the power of healing possible, and it is why distance, in either time or space, no longer affects the outcome.

You as healer are never alone. In the Semitic healing tradition, there are four angelic presences--four aspects of El. The angels are with you, the healer, whenever you request their presence. The angel Uriel shows both healer, and the person needing help, what is in front of them; Rafael presides over the act of healing; Mikhael embodies the wisdom, the energetic consciousness, of healing; and Gavriel offers post-healing support. Healing consciousness is consciousness of this reality. Maryam had this consciousness. You may recall that knowledge of the All was one of the later Gnostic ways of describing such a consciousness. Maryam has this gnosis and she can initiate you into the power of distant healing.

Healing Our Childhood Past

From early childhood most of us begin to lose spiritual consciousness as we become more and more immersed in physical life and conditioned by the words and behaviors of others as well as our own reactions to them. Healing is often needed from childhood onward, for this is when the illusion of separation from our spiritual origins--delivered to children by their parents, caregivers, and the world--begins to take hold and where the separation may already be manifesting as illness.

Healing childhood trauma involves returning to and healing the original wound. To reach this deep wound, we are dealing with the spiritual realities behind what has happened to us in our individual lives. Healing can take a person back to the time frame of the original trauma, to the time when disconnection from the sacred began to occur, or was caused by some event.

Sometimes a life-threatening condition suffered during our early years may in fact be a shamanic initiation that can stimulate the activity of the subtle energy centers (chakras) to enhance access to spiritual reality. At any age, illness or other trauma may be the catalyst for making life changes and to start really living. Illness gives us the opportunity to consider what is important in our lives, to follow our dreams, to heal old wounds, and perhaps to say good-bye. Illness or trauma empowers the soul to be heard and show us the way to a more fulfilling life. When we can see that everything is a form of love, we become happy with our life and everything in it. Then true healing has occurred, regardless of whether our physical bodies are ill or even dying.
Jack Angelo

Jack Angelo runs a healing and counseling practice in Gwent, South Wales. He is also a national trainer for the National Federation of Spiritual Healers and conducts his own workshops internationally. He is the author of Spiritual Healing: Energy Medicine for Today.

“Thank you! This book is a welcome gift for disciples of Mary Magdalene and Jesus. Illuminating texts from the Fourth Gospel, Jack Angelo reveals the perspective of ‘the woman who knew the All’--Mary Magdalene herself. Here at last, flowing from Jesus’s seven miracles, are Magdalene’s wisdom teachings to guide the pilgrim soul on the Way of the Heart.”

– Margaret Starbird, author of The Woman with the Alabaster Jar and Mary Magdalene, Bride in Exile

“Jack Angelo has discovered a treasure chest to which the key has been lost for 2,000 years. In this important and fascinating book Mary Magdalene takes us into the eternal, living stream of her own consciousness and decodes for us the healing wisdom, hidden until now, in the part of the Fourth Gospel called ‘The Book of Signs.’ Angelo shows us how seven miracles of Jesus are intended to be a roadmap to transformation as the blessed couple both teach and model the way of total one-ness and heart-centered knowledge. Patriarchal blindness caused the message to be lost in part, but it still carries dynamic power to heal our planet and end the existential sickness that distorts much of Christian thinking. We come to realize that ‘the beginning is right now’ and creation is happening as we awaken to the words of Maryam, master teacher, beloved disciple, wife, and companion of Yeshua.”

– Mary T. Beben, author of The Pleiadian House of Initiation

“The Healing Wisdom of Mary Magdalene is a rich and fascinating read. I could not put it down. Jack Angelo’s insights on the real meaning behind the miracle stories in the gospels are a treasure trove of wisdom much needed in the world today . . . a pleasure to read.”

– Tricia McCannon, author of Return of the Divine Sophia and Jesus: The Explosive Story of the 30 Lost

The Healing Wisdom of Mary Magdalene

Esoteric Secrets of the Fourth Gospel