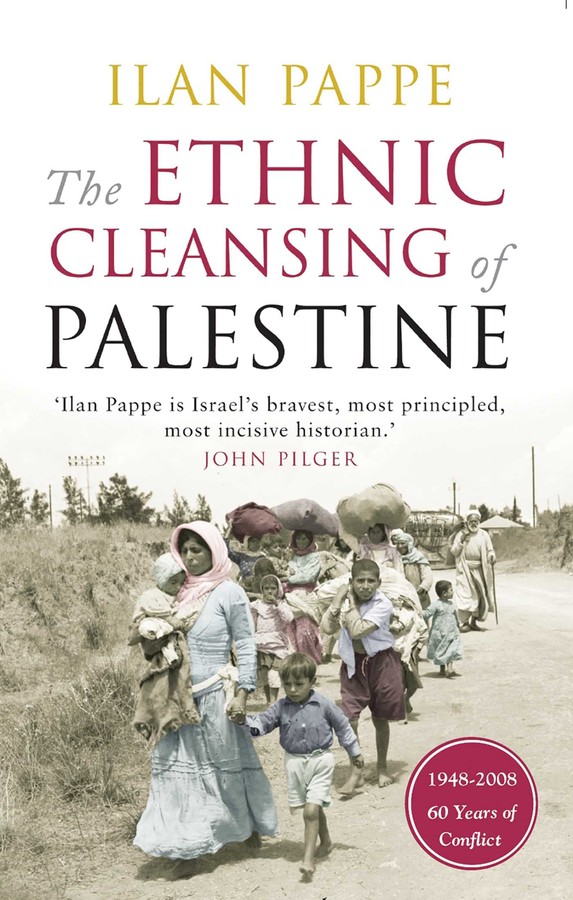 The Ethnic Cleansing of Palestine

The book that is providing a storm of controversy, from ‘Israel’s bravest historian’ (John Pilger)

Renowned Israeli historian, Ilan Pappe's groundbreaking book revisits the formation of the State of Israel. Between 1947 and 1949, over 400 Palestinian villages were deliberately destroyed, civilians were massacred and around a million men, women, and children were expelled from their homes at gunpoint.

Denied for almost six decades, had it happened today it could only have been called "ethnic cleansing". Decisively debunking the myth that the Palestinian population left of their own accord in the course of this war, Ilan Pappe offers impressive archival evidence to demonstrate that, from its very inception, a central plank in Israel’s founding ideology was the forcible removal of the indigenous population. Indispensable for anyone interested in the current crisis in the Middle East.

Ilan Pappe is an Israeli historian and socialist activist. He is a professor of history at the College of Social Sciences and International Studies at the University of Exeter in the United Kingdom, director of the university's European Centre for Palestine Studies, and co-director of the Exeter Centre for Ethno-Political Studies. He is also the author of the bestselling The Ethnic Cleansing of Palestine (Oneworld), A History of Modern Palestine (Cambridge), The Modern Middle East (Routledge), The Israel/Palestine Question (Routledge), The Forgotten Palestinians: A History of the Palestinians in Israel (Yale), The Idea of Israel: A History of Power and Knowledge (Verso) and with Noam Chomsky, Gaza in Crisis: Reflections on Israel's War Against the Palestinians (Penguin). He writes for, among others, the Guardian and the London Review of Books.

'A major intervention in an argument that will, and must, continue. There's no hope of lasting Middle East peace while the ghosts of 1948 still walk.'

'Along with the late Edward Said, Ilan Pappe is the most eloquent writer of Palestinian history.'

'Pappe has opened up an important new line of inquiry into the vast and fateful subject of the Palestinian refugees. His book is rewarding in other ways. It has at times an elegiac, even sentimental, character, recalling the lost, obliterated life of the Palestinian Arabs and imagining or regretting what Pappe believes could have been a better land of Palestine.'

'Ilan Pappe is Israel's bravest, most principled, most incisive historian.'

'Superb account of how, and why, Palestinians were driven out of their homes.'

'Pappe’s book is an essential read for anyone trying to understand the politics and history of the Middle East.'

'Leading Israeli historian Ilan Pappe delves into his country's bloodied past in search of answers in the present.'

'Pappe is one of the brave few voices to stand up and be counted in the oppressive atmosphere of Israeli society. Pappe's book is a searing account of the horrific brutality perpetrated during the birth of the state of Israel.'

'Pappe is well positioned to lob a grenade such as this one into the twin worlds of Middle Eastern studies and politics. Pappe's book should shock and shame the academic world'

'Pappe offers a scorching indictment of Israel's treatment of the Palestinian people in The Ethnic Cleansing of Palestine.'

'A bold expose of Israel's purge of its Arab population in the early years of its existence. It should be read by anyone wanting to grasp the seemingly unfathomable background to the Israel-Palestine conflict. Pappe himself should be supported and applauded.'

'Ilan Pappe's The Ethnic Cleansing of Palestine is a vital contribution to the scholarship from these new historians… Pappe forever puts to rest any doubt that Palestinians were systematically and brutally expelled from their homeland.'

– Against the Current (An independent socialist organisation)

'Superb account of how, and why, Palestinians were driven out of their homes. Pappe explains why there can be no peace until this crime has been acknowledged and redressed.'

'The organization of the material in this book leaves almost nothing to be desired. The twelve sections substantially challenge and considerably undermine the ostensibly convincing Israeli discourse on the refugees question and the 1984 events.'

'Groundbreaking research into a well-kept Israeli secret. A classic of historical scholarship on a taboo subject by one of Israel's foremost New Historians.'

The Ethnic Cleansing of Palestine