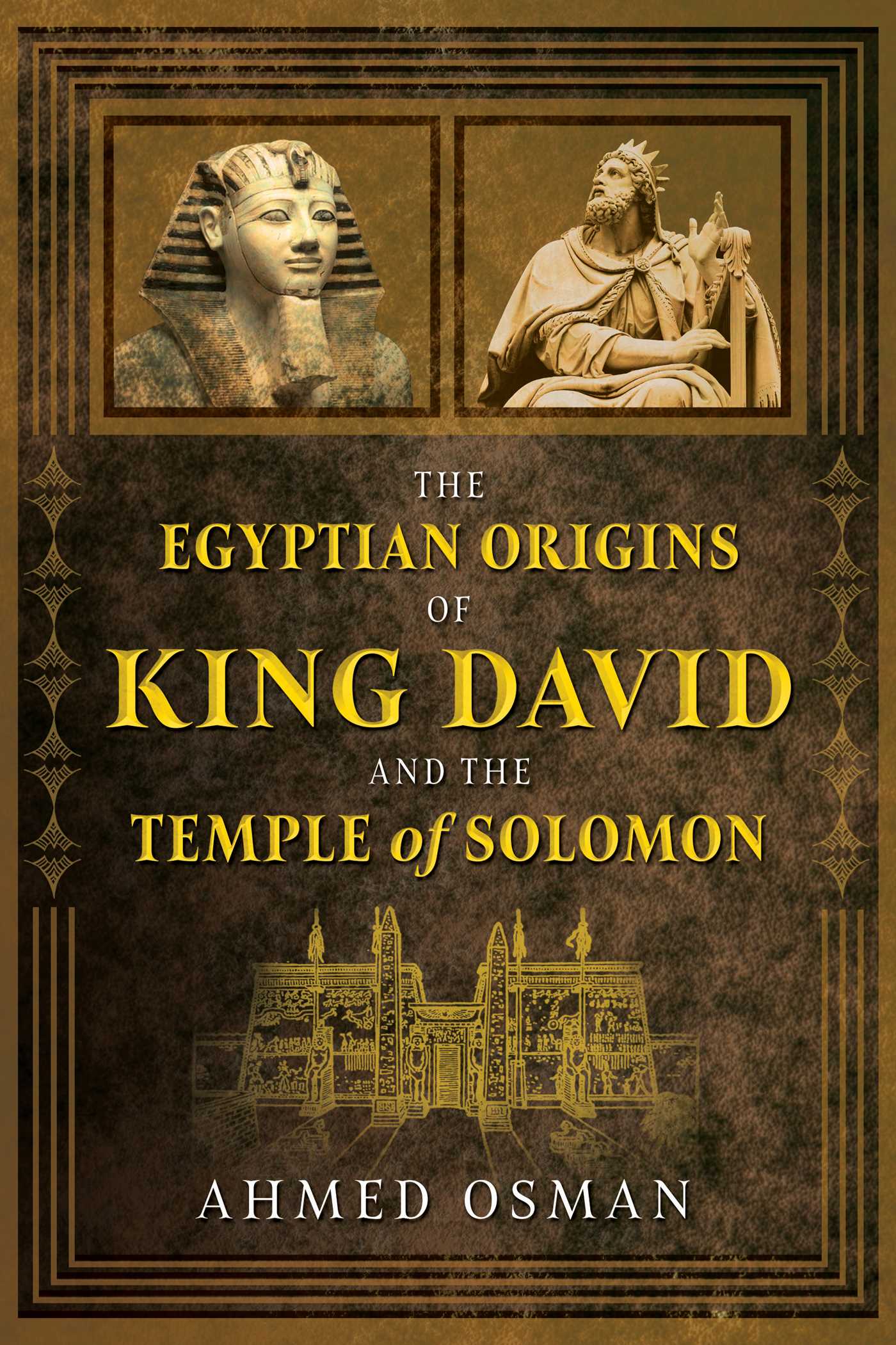 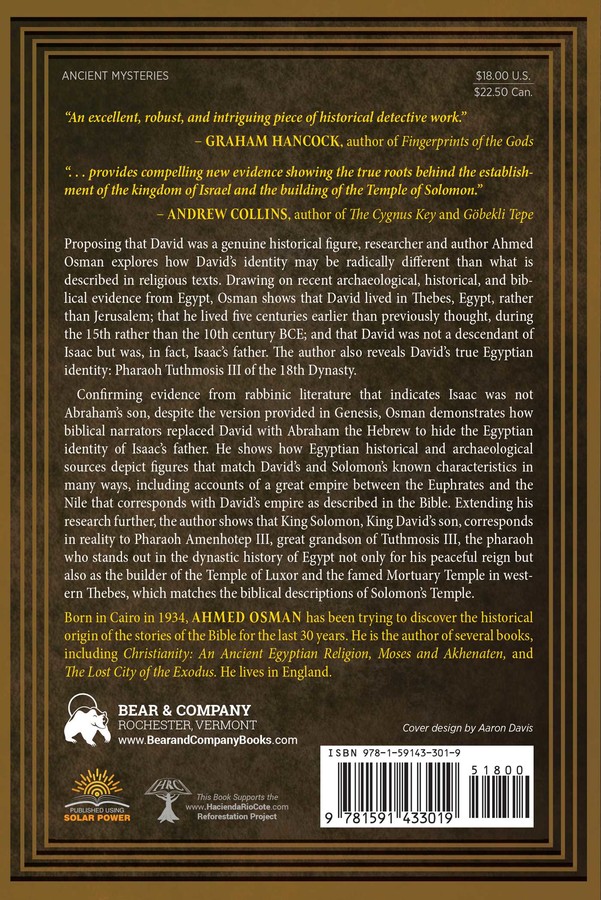 The Egyptian Origins of King David and the Temple of Solomon

During the last two centuries, thousands of ancient documents from different sites in the Middle East have been uncovered. However, no archaeological discovery speaks of King David or Solomon, his son and successor, directly or in directly. Was King David a real person or a legend like King Arthur? Proposing that David was a genuine historical figure, Ahmed Osman explores how his identity may be radically different than what is described in religious texts.

Drawing on recent archaeological, historical, and biblical evidence from Egypt, Osman shows that David lived in Thebes, Egypt, rather than Jerusalem; that he lived five centuries earlier than previously thought, during the 15th rather than the 10th century B.C.; and that David was not a descendant of Isaac but was, in fact, Isaac’s father. The author also reveals David’s true Egyptian identity: Pharaoh Tuthmosis III of the 18th Dynasty.

Confirming evidence from rabbinic literature that indicates Isaac was not Abraham’s son, despite the version provided in Genesis, Osman demonstrates how biblical narrators replaced David with Abraham the Hebrew to hide the Egyptian identity of Isaac’s father. He shows how Egyptian historical and archaeological sources depict figures that match David’s and Solomon’s known characteristics in many ways, including accounts of a great empire between the Euphrates and the Nile that corresponds with David’s empire as described in the Bible.

Unveiling the real history behind the biblical story of King David, Osman reveals that the great ancestor of the Israelites was, in fact, Egyptian.
Chapter 6

How did the account of Tuthmosis III and his Egyptian empire become part of the biblical sources used by the scribes for the story of David?

When we think of the Israelites’ connection with Egypt, we always talk about Joseph the Patriach, of the coat of many colors. It was he who brought Jacob, Israel, and his Hebrew tribe from Canaan to Egypt. Nevertheless, the Bible itself gives us an account of an earlier Hebrew contact with Egypt’s Pharaonic family, by Abraham and his wife Sarah. Abraham the Hebrew, who made his first appearance in history in the 15th century BC, has been regarded by Jews, Christians, and Muslims alike, as the founding father of the 12 tribes of Israel.

In this chapter, however, I am going to show that Abraham’s patriarchy is by no means actual: rather it is of symbolic importance.

Abram and his wife Sarai (to give them their original names found in the Bible) began their journey into history, according to the biblical account, at Ur. The party, led by Terah, Abraham’s father, also included Lot, Terah’s grand-son and Abram’s nephew. The Book of Genesis gives no explanation of the reasons which prompted Terah and his family to set out on the great trade route to Canaan. Nor, as is usual in the Bible, is there any indication of the date when this migratory journey began.

For anyone trying to make a living from the soil, the hills of Canaan posed an intimidating challenge. Times of famine were common--and it was at a time of famine that Abram and Sarai are said to have set out on their travels again from Haran, making their way south, a journey that was to forge the first links between this Hebrew Semitic tribe and the royal house of Egypt, and ensured for Abram’s family an enduring place in world history.

Compared with Canaan, Egypt was a rich and sophisticated country. Although Abram and Sarai are said by the Bible to have set out for Egypt at a time of famine, it may have been some other motive--trade, perhaps--that caused them to make the journey. Certainly, they did not stay in the Eastern Delta of the Nile--which one might have expected had they simply been seeking food--but made their way to wherever the Pharaoh of the time was holding court.

Wherever Abram and Sarai went, and for whatever purpose, we are simply told that Sarai was “a fair woman to look upon” and, as they approached Egypt, Abram, fearing that he might be killed if it were known that Sarai was his wife and Pharaoh took a fancy to her, said: “Say you are my sister, so that I will be treated well for your sake and my life will be spared because of you” (12:13). This, according the Book of Genesis, proved a wise precaution. Courtiers advised Pharaoh of the beautiful woman who appeared in their midst, and “she was taken into his palace. He treated Abram well for her sake, and Abram acquired sheep and cattle, male and female donkeys . . . But the Lord inflicted serious diseases on Pharaoh and his household because of Abram’s wife Sarai. So Pharaoh summoned Abram. ‘What have you done to me?’ he said. ‘Why didn’t you tell me she was your wife? Why did you say, She is my sister, so that I took her to be my wife? Now then, have your wife. Take her and go!’ Then Pharaoh gave orders about Abram to his men, and they sent him on his way, with his wife and everything he had.” (Genesis 12: 15-20).

Abram and Sarai were sent back to Canaan with generous gifts. Pharaoh also provided Sarai with an Egyptian maid, Hagar, and, after they had returned safely to Canaan, Sarai gave birth to a son, Isaac. The essence of the biblical account of the journey to Egypt is that Sarai, the wife of Abram, also became the wife of the ruling Pharaoh. This, in the custom of the time, would not only have involved the paying of the bride-price to Abram for the hand of his “sister,” but sexual intercourse on the same day as the actual marriage ceremony. The question therefore arises: Who was the real father of Isaac, Abram or Pharaoh?

The available evidence--the marriage; Abram’s pose as Sarai’s brother; Sarai being seen by princes of Pharaoh who commended her beauty; her being taken into the royal palace; the king’s marriage to her and his generous treatment of Abram (presents of sheep, oxen, etc.); the gift to Sarai of the maid Hagar; the elaborate efforts of the biblical narrator to put as many years as possible between the couple’s return to Canaan and Isaac’s birth; textual reference in the Talmud (the most important work of religious law in post-biblical Judaism), regarded as next in authority to the Old Testament in its account of the early history of the Israelites, and in the Qur'an, sacred book of Islam; the history of Isaac’s immediate descendants--points to the Pharaoh, not Abram, as Isaac’s father.

The efforts of the biblical narrator to disguise the truth about Isaac’s parenthood have, I believe, historical roots that go beyond the fact that he was the son of a second, “sinful” marriage. In the course of the years that followed, the Israelites were to return to their ancestor’s land in Egypt, where they remained for four generations until the Exodus when, burdened by harsh treatment and persecution by their Egyptian taskmasters, they were led out of the country by Moses on the first stage of their journey to the Promised Land, back in Canaan. Many more centuries passed before an account of these events was put down in writing, by which time Egypt and its Pharaoh had become a symbol of hatred for the Israelites. The biblical narrator was therefore at pains to conceal any family connections between Israel and Egypt.
Ahmed Osman

Ahmed Osman was born in Cairo in 1934 and is the author of The Hebrew Pharaohs of Egypt, Moses and Akhenaten, and Jesus in the House of the Pharaohs. He lives in England.

"Ahmed Osman single-handedly moves the goal posts of biblical scholarship . . . . This is a 'must read' for all alternative history buffs and scholars alike."

– Rand Flem-Alth, coauthor of When the Sky Fell and The Atlantis Blueprint

“An excellent, robust, and intriguing piece of historical detective work.”

– Graham Hancock author of Fingerprints of the Gods

“No one since Sigmund Freud has done more to show the connection between ancient Egypt’s Amarna period and the biblical stories of Joseph, Moses, and the Exodus. Ahmed Osman now provides compelling new evidence showing the true roots behind the establishment of the kingdom of Israel and the building of the Temple of Solomon.”

– Andrew Collins, author of The Cygnus Key and Göbekli Tepe:Genesis of the Gods

“Ahmed Osman has discovered an intriguing back door into biblical history. Walking the tightrope between skeptical archaeologists and true believers of the Bible, the author asks a compelling question: Did Hebrew scribes attribute the military victories of an Egyptian pharaoh to David, the famous slayer of Goliath?”

– Rand and Rose Flem-Ath, authors of The Murder of Moses

The Egyptian Origins of King David and the Temple of Solomon