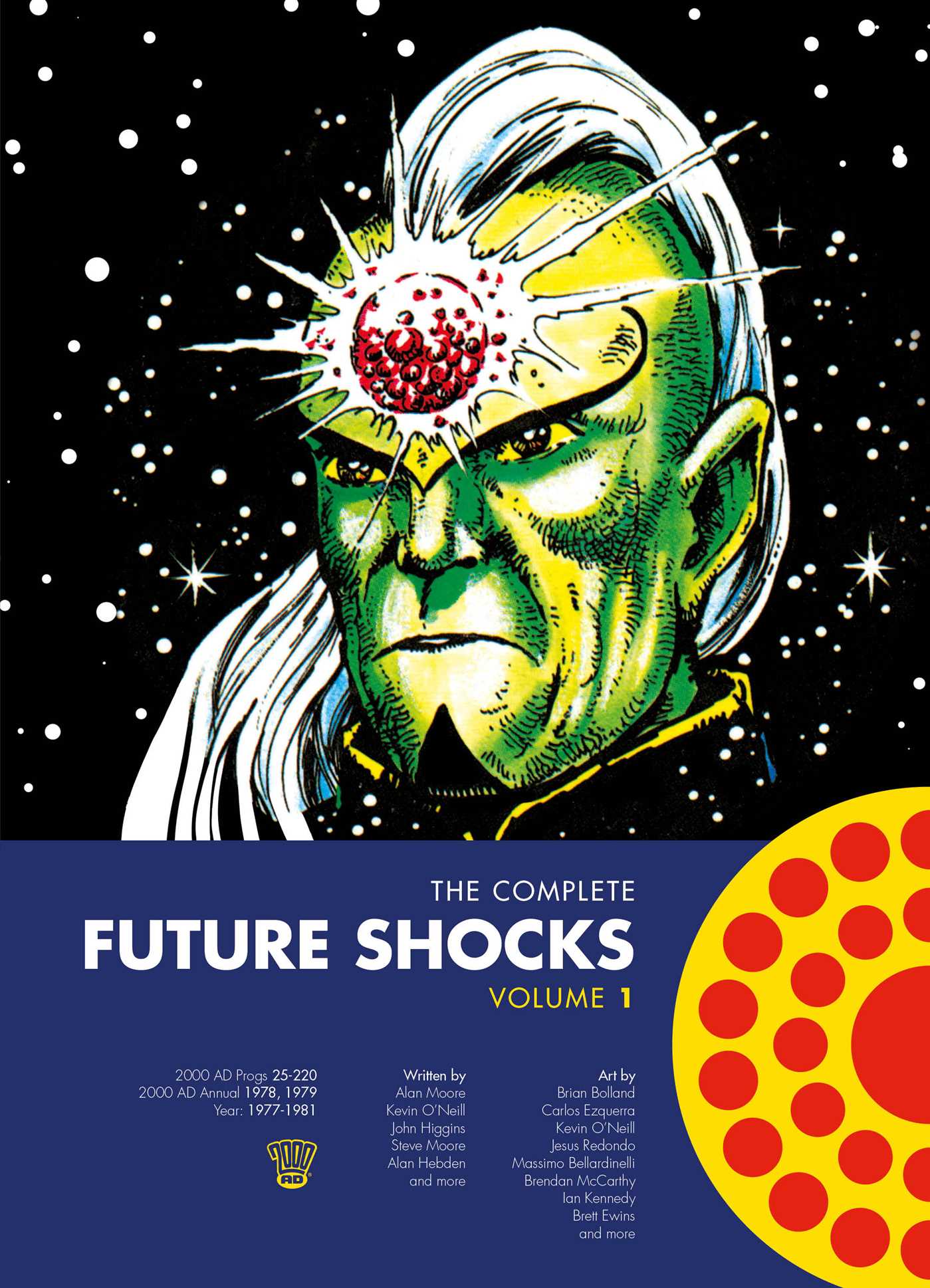 The Complete Future Shocks, Volume One

Tharg's Future Shocks are one-off, twist ending, sci-fi thrills that have introduced many of the biggest names in the comic book industry through the pages of 2000 AD. THE ULTIMATE VISION OF THE FUTURE! From Alan Moore to Al Ewing, Kevin O'Neill to Jon Davis-Hunt, Future Shocks have been a staple of the UK's best-selling comic 2000 AD! This exciting first volume takes us back to the earliest days of the strip and showcases the burgeoning, immense talents of such luminaries as Steve Moore, Alan Moore, Brett Ewins, Brian Bolland, Dave Gibbons, John Cooper, Carlos Pino, Jesus Redondo, Steve Dillon, Peter Milligan and many, many more.

Perhaps the most widely respected comic writer of the modern era, Alan Moore’s contribution to the comics world is incalculable. Creator of some of 2000 AD’s most popular series, including Abelard Snazz, The Ballad of Halo Jones, D.R. & Quinch and Skizz, he has also worked on A.B.C. Warriors, Ro-Busters, Rogue Trooper, Ro-Jaws’ Robo-Tales, Tharg the Mighty, Time Twisters and several one-off strips. Outside of the Galaxy’s Greatest Comic, Moore is best known for his work on the classic Watchmen, which redefined the superhero genre in 1986, but this is simply touching the surface of a career which has included 1963, A1’s Warpsmiths, Bojeffries Saga and Maxwell the Magic Cat, AARGH!, Batman, Big Numbers, Brought to Light, Captain Britain, Deathblow, Flesh and Bones, From Hell, Glory, Green Lantern Corps, Lost Girls, Miracleman, A Small Killing, Snakes and Ladders, Spawn, Supreme, Swamp Thing, Superman , V For Vendetta, WildC.A.T.S. and Youngblood. Moore is now owner and chief writer of the America’s Best Comics line, distributed by WildStorm, and including Promethea, Tom Strong, Tomorrow Stories, Top Ten and The League of Extraordinary Gentlemen, which has been made into a major Hollywood movie.

Dave Gibbons is one of 2000 AD’s most popular artists, having co-created Harlem Heroes and Rogue Trooper. He has also pencilled A.B.C. Warriors, Dan Dare, Judge Dredd, Mega-City One, Ro-Busters, Tharg the Mighty, Tharg’s Future Shocks and Time Twisters, as well as having scripted several Rogue Trooper stories – making Gibbons one of the few 2000 AD creators to have served as writer, artist and letterer! Beyond 2000 AD, Gibbons is unquestionably best known for his work on the award-winning classic Watchmen (with Alan Moore), but he has also drawn Batman, Doctor Who, Give Me Liberty, Green Lantern, Superman, Star Wars and his graphic novel, The Originals.

Steve Dillon is a fan-favourite 2000 AD writer and artist, and the creator of both Hap Hazzard and the Irish Judge Joyce. His writing for the Galaxy’s Greatest Comic includes Future Shocks and Rogue Trooper, while Dillon’s pencils have graced A.B.C. Warriors, Bad Company, Judge Dredd, Harlem Heroes, Ro-Busters, Rogue Trooper and Tyranny Rex. Dillon shot to international superstardom as a result of his work on DC/Vertigo’s Preacher, co-created with 2000 AD’s Garth Ennis.

Perhaps the most popular 2000 AD artist of all time, Brian Bolland’s clean-line style and meticulous attention to detail ensure that his artwork on strips including Dan Dare, Future Shocks, Judge Dredd and Walter the Wobot looks as fresh today as it did when first published. Co-creator of both Judge Anderson and The Kleggs, Bolland’s highly detailed style unfortunately precluded him from doing many sequential strips — although he found the time to pencil both Camelot 3000 and Batman: The Killing Joke for DC Comics.

The Complete Future Shocks, Volume One

More books in this series: The Complete Future Shocks