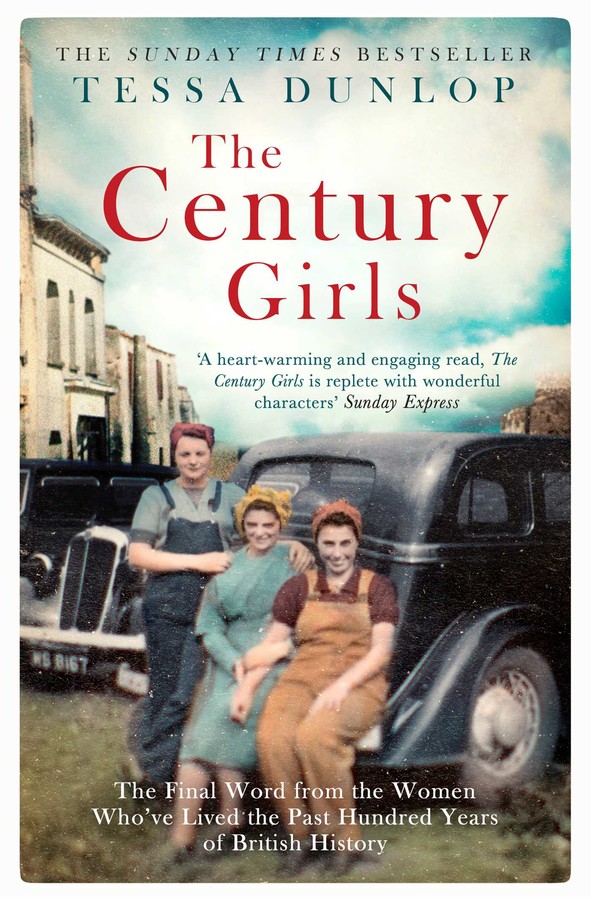 By Tessa Dunlop
LIST PRICE £8.99
PRICE MAY VARY BY RETAILER

'Tessa Dunlop made pains to select women from broad walks of life and succeeds in weaving a rich tapestry of experiences.'The Independent
‘A warm-hearted and engaging read, The Century Girls is replete with wonderful characters.’ Sunday Express
'Dunlop has pulled off an impressive feat of oral history...creating a moving portrait of a world that is now lost forever.' Who Do You Think You Are?​

A celebration of the one-hundred years since British women got the vote, told, in their own voices, by six centenarians: Helena, Olive, Edna, Joyce, Ann and Phyllis – The Century Girls​

In 2018 Britain celebrates the centenary of some women getting the vote. The intervening ten decades have witnessed staggering change, and The Century Girls features six women born in 1918 or before who haven’t just witnessed that change, they’ve lived it. Empire shrank, war came and went, and modern society demanded continual readjustment.... the Century Girls lasted the course, and this book weaves together their lifetime’s adventures – what they were taught, how they were treated, who they loved, what they did and where they are now.

With stories that are intimately knitted into the history of the British Isles, this is a time-travel epic featuring our oldest, most precious national treasures. Edna, 102, was a domestic servant born in Lincolnshire. Helena is 101 years old and the eldest of eight born into a Welsh farming family. Olive, 102, began life as a child of empire in British Guiana and was one of the first women to migrate to London after the war. There’s Ann, a 103-year-London bohemian; 100-year-old Phyllis, daughter of the British Raj, who has called Edinburgh home for nearly eighty years; and finally ‘young’ Joyce – a 99-year-old Cambridge classicist who’s still at work. It is through the prism of these women’s very long lives that The Century Girls provides a deeply personal account of British history over the past one hundred years. Their story is our story too.

Further praise for The Century Girls

'The book's atmosphere of intimacy, enhanced by a generous selection of evocative photographs, is compelling and Dunlop's attention to her subjects' day-to-day lives renders this an absorbing alternative to grander views of recent history.' TLS

'Fascinating . . . a deeply personal account of British history over the past 100 years.' Countryside Magazine, Book of the Month

‘A warm-hearted and engaging read, The Century Girls is replete with wonderful characters.’ Sunday Express

Tessa Dunlop
Tessa Dunlop is a broadcaster, writer and historian. She is best known for her work on BBC2’s Bafta award-winning series Coast and has just been selected by the channel to double-head a new Coast Archive series with Neil Oliver to celebrate the programme’s tenth anniversary. She is also the author of The Bletchley Girls (Hodder, 2014).

'Tessa Dunlop made pains to select women from broad walks of life and succeeds in weaving a rich tapestry of experiences. Dunlop is playful and probing in her questioning, covering everything from sex and relationships to feminism – and it’s clear she formed a lasting friendship with each of the women they interviewed.'

'A delightful book... all about women and women's lives.'

'It features among others my teacher and mate, 99 year old Joyce Reynolds, going super strong and still a stern and helpful critic.'

‘A deeply personal and moving account of the last 100 years of British history.’

‘A warm-hearted and engaging read, The Century Girls is replete with wonderful characters.’

'The book offers a highly personal insight into British society over the past century... The frank, probing style of Dunlop’s interview technique allows us access to a series of revealing and enlightening stories which would otherwise have been lost... Dunlop manages to capture these unique personalities in her book with a touching intimacy that never strays into sentimentality.'

'Tessa Dunlop has found a uniquely personal touch… Dunlop has pulled off an impressive feat of oral history, weaving the women’s memories of their long lives into a coherent narrative and setting it in the context of events at the time… They recount their memories in incredible detail, creating a moving portrait of a world that is now lost forever. If you have older female relatives this book will inspire you to capture their stories.'

– Who Do You Think You Are?

‘This year is the centenary of women getting the vote in Britain... Tessa Dunlop has had one of those ideas that belong firmly in the ‘simple-but-brilliant’ category: speaking to six women who’ve been alive for all those hundred years... The result is a wonderful blend of British history with individual stories – and for any reader under about 90, an often startling reminder of how much things have changed.’

‘What better way to mark the centenary of some British women getting the vote than to read about inspirational women who witness revolutionary changes? Six centenarians reminisce on their incredible century. A history lesson to savour.’

'The book's atmosphere of intimacy, enhanced by a generous selection of evocative photographs, is compelling and Dunlop's attention to her subjects' day-to-day lives renders this an absorbing alternative to grander views of recent history.'

'Fascinating... a deeply personal account of British history over the past 100 years.'

– Countryside Magazine, BOOK of the MONTH

By Tessa Dunlop
LIST PRICE £8.99
PRICE MAY VARY BY RETAILER