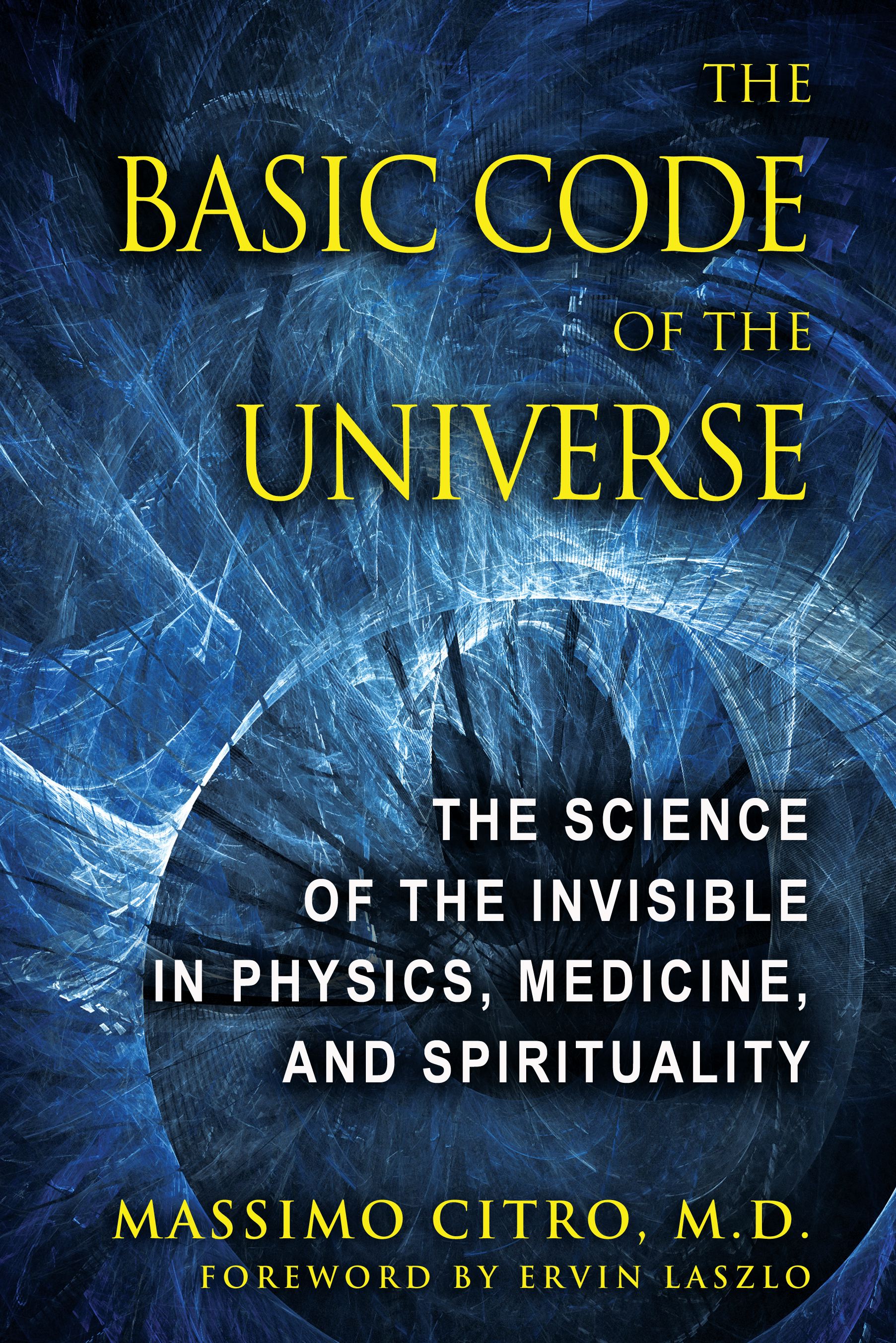 The Basic Code of the Universe

The Science of the Invisible in Physics, Medicine, and Spirituality

DNA dictates the physical features of an organism. But what dictates howsomething grows--from the division of cells in a human being to the fractal patterns of a crystal? Massimo Citro reveals that behind the complex world of Nature lies a basic code, a universal information field--also known as the Akashic field, which records all that was, is, and will be--that directs not only physical development and behavior but also energetic communication and interactions among all living and non-living things. The author examines research on consciousness, quantum physics, animal and plant intelligence, the power of intention, emotional fields, Kirlian photography, and the effects of thoughts, emotions, and music on water. Linking the work of Ervin Laszlo on the Akashic field, Rupert Sheldrake on morphogenetic fields, Richard Gerber on vibrational medicine, and Masaru Emoto on the memory of water, Citro shows how the universal information field connects every person, plant, animal, and mineral--a concept long known by shamans and expounded by perennial wisdom. Putting this science of the invisible to practical use, he explains his revolutionary system of vibrational medicine, known as TFF, which uses the information field to obtain the benefits of natural substances and medications in their &#8220;pure&#8221; informational form, offering side-effect-free remedies for health and well-being.

What is the basic code made of? Informed matter, an intermediate state between pure matter and combined matter. Pure matter is a still ocean. Each body is like a wave made of combined matter (the crest of the wave) and informed matter (the unseen part under the water, from which the crest derives). While it is not yet possible to measure the code, we can catch some of the interactions and communications in which information is exchanged. And what is information? Whatever its nature, information expresses rhythms, vibrations, and disturbances of the field. These spatial areas where the field is disrupted are what we call informed fields.

I won’t start by defining information. I will start with an image: the god Hermes with winged ankles who runs on the waves of the sea. He is agile, light, fast as lightning. In his hand he carries the golden rod with which he enchants the eyes of humans. A gust of wind, and he is in the cave of Calypso, the goddess who holds Odysseus but who will be forced by Zeus to release him. Homer portrays Hermes as the divine messenger, in one of the first representations of information.

There is a god in information, a god that is the essence of life itself. This god operates everywhere: in science, linguistics, cybernetics, communications, computing, genetics, in all moments of our lives where there are signals that provide elements of knowledge. To inform comes from the Latin in-formare, meaning “provide a form,” to mold according to a shape. Nothing is created without information. Every creator informs the creatures after him (as it says in the Bible, “And He created Man in his image and likeness”). From “intellectually inform” the meaning moves on to “keep informed and give the chance to operate.”

Information affects the behavior or form. An example is a driver at a set of traffic lights, or the hormones that change the body of an adolescent. Everything takes place in three phases: the signal must be emitted, then transmitted and received, and finally understood. The object of the signal must be able to receive it (the distracted driver may not see the traffic lights) and to understand it (a wild creature in the forest doesn’t understand traffic lights). Everything changes according to the information. As Heraclitus of Ephesus put it: everything flows and nothing is repeated. Even the river is never the same, though it may appear to be so.

Everything is information: the melody that makes you dream or the molecule that activates a receptor. The universe is a net whose knots are the bodies and whose threads are the waves and radiations. The knots may be perceived by the senses, but the threads are not, though they inform, exchange, and organize life. Everything exchanges information with everything in the communication network of the world. Every being sends messages that contain history, conditions, and properties, almost in eagerness to reassert identity and communicate it. Everything gets repeated this way, to construct the network of information and exchange operating invisibly in the emptiness, in the apparent void. Everyone knows that our senses are limited, yet we continue to ignore what we cannot perceive. And we lose the faculty to know.

The largest parts of events are not perceivable. Think about how many experiments appear not to work just because we are unable to record the infinitesimal variations produced! In the world of emptiness, things could be different from the world of solids and thus require other paradigms. The history of physics is full of precedents, such as Heisenberg’s discovery that space and time behave differently in the infinitively small. Even the vacuum has characteristics, laws, and physiology to investigate.

Although it seems still, matter is in constant motion. Vibrating atoms and dashing particles are confined in narrow spaces. As with a bullet in the barrel of a gun, the narrower the space, the faster the movement. Electrons travel at hundreds of miles per second, protons and neutrons ten times faster. The rotations of protons reach speeds of 3 x 10 to the twenty-second power, thirty thousand billion billion times per second. Because electric charges in motion produce magnetic fields, such fields constantly permeate everything.

If we travel up in the ladder of dimensions, molecules are not static either, because they are subjected to multiple movements (called “stretching,” “bending,” and so on) responsible for vibrations. “What kind?” you may ask. “Electromagnetic,” you might reply. Correct, but not solely. Take an object, any object, and start to move it. Shake it hard and think about what is happening in the surrounding air. That moving body is moving small masses of air, and so is adversely affecting its field with elastic types of waves. Never thought about it? The same happens in the microscopic world: by vibrating at a very high speed, molecules generate an electromagnetic elastic field because they disturb the nearby environment. Herein lies the secret: electromagnetic waves, which are also elastic.

If the superstrings theory is true then it fits well with our theory. The bricks of the world would be microscopic strings, each vibrating in its own way. Think about a violin string: how many possibilities of oscillation--the so-called resonances--how many different types of waves, with peaks and dips equidistant from one another! The string is the same, but different vibrations give rise to different notes. Similarly, the same microscopic strings would be vibrating in different ways to give the feeling of different masses. The properties of an elementary particle would be determined by the vibration mode of its internal string. Mass is the energy with which the string vibrates, and the “matter” of which the forces and particles are made is always the same. Everything corresponds: the universe is an extraordinary immense symphony!
Massimo Citro

Massimo Citro, M.D., is a medical doctor specializing in psychotherapy and the discoverer of pharmacological frequency transfer (TFF). He is a member of the Club of Budapest, is the founder and director of the Alberto Sorti Research Institute (IDRAS), and also has a degree in literature. He lives in Torino, Italy.

“By crystallizing the theories of such thinkers as Aristotle, Newton, Einstein, and Böhm and covering such diverse topics as homeopathy, DNA, and information theory, the fundamental structure of matter and energy, the curious properties of water, and holographic paradigms, Dr. Citro has penned a profound work that teaches the reader about both the limits of perception and its vast possibilities. This is the kind of book that gets the mental wheels to spin--a fine accomplishment, indeed!”

– Marc J. Seifer, Ph.D., author of Transcending the Speed of Light and Wizard: The Life & Times of Nik

“The Basic Code of the Universe is ‘two books in one’ and contains important and in some respects essential knowledge. On the one hand it demonstrates that the neglected ‘submerged’ side of things can be experimentally verified in ways that can make a significant contribution to our health and well-being. And on the other hand it provides a cogent exposition of the new scientific paradigm that can account for the observed facts, a paradigm that changes our most basic understanding of the fundamental nature of the universe, and of all things in it. In both respects the book is detailed and remarkably complete; hardly anything remains to be added. Recommendation: read this book, read it carefully, and note the key assertions.”

– Ervin Laszlo, author of Science and the Akashic Field and Quantum Shift in the Global Brain

“...Citro’s research is immensely interesting, and if you want to stay current on what’s happening in the world of the “memory of water” research and of imprinting information onto water for healing effect, you will want to read this book.”

“Linking the work of Ervin Laszlo on the Akashic field, Rupert Sheldrake on morphogenetic fields, Richard Gerber on vibrational medicine, and Masaru Emoto on the memory of water, Citro shows how the universal information field connects every person, plant, animal, and mineral – a concept long known by shamans and expounded by perennial wisdom.”

The Basic Code of the Universe

The Science of the Invisible in Physics, Medicine, and Spirituality