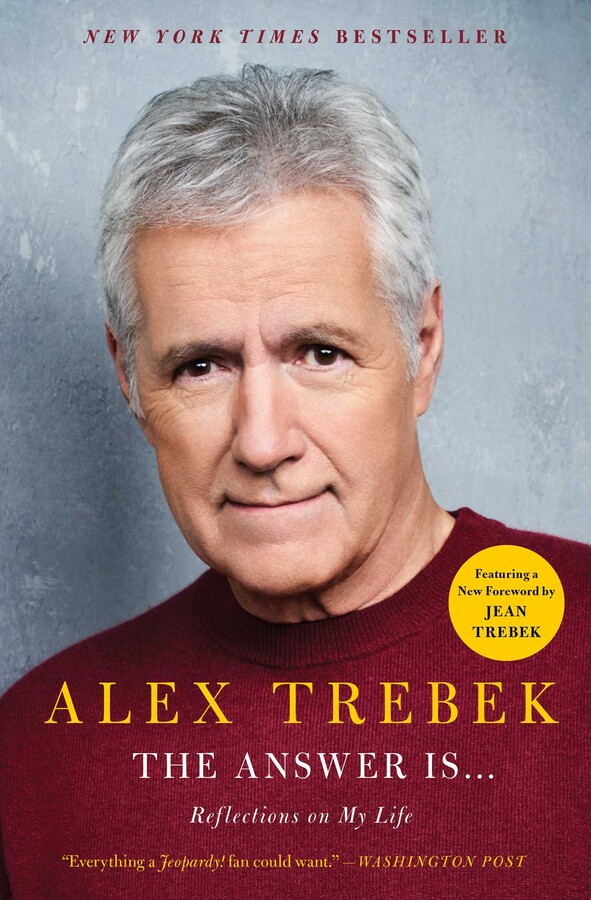 Reflections on My Life

By Alex Trebek
LIST PRICE £11.99
PRICE MAY VARY BY RETAILER

Since debuting as the host of Jeopardy! in 1984, Alex Trebek has been something like a family member to millions of television viewers, bringing entertainment and education into their homes five nights a week. Last year, he made the stunning announcement that he had been diagnosed with stage four pancreatic cancer. What followed was an incredible outpouring of love and kindness. Social media was flooded with messages of support, and the Jeopardy! studio received boxes of cards and letters offering guidance, encouragement, and prayers.

For over three decades, Trebek had resisted countless appeals to write a book about his life. Yet he was moved so much by all the goodwill, he felt compelled to finally share his story. “I want people to know a little more about the person they have been cheering on for the past year,” he writes in The Answer Is…: Reflections on My Life.

The book combines illuminating personal anecdotes with Trebek’s thoughts on a range of topics, including marriage, parenthood, education, success, spirituality, and philanthropy. Trebek also addresses the questions he gets asked most often by Jeopardy! fans, such as what prompted him to shave his signature mustache, his insights on legendary players like Ken Jennings and James Holzhauer, and his opinion of Will Ferrell’s Saturday Night Live impersonation. The book uses a novel structure inspired by Jeopardy!, with each chapter title in the form of a question, and features dozens of never-before-seen photos that candidly capture Trebek over the years.

This wise, charming, and inspiring book is further evidence why Trebek has long been considered one of the most beloved and respected figures in entertainment. 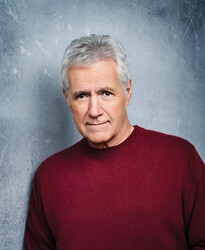 Alex Trebek has hosted the syndicated quiz show Jeopardy! for thirty-six seasons, earning him seven Daytime Emmy Awards—including a Lifetime Achievement Award—and the Guinness World Record for most episodes of a game show hosted by the same presenter. Prior to Jeopardy!, he hosted various other quiz shows including The Wizard of Odds and High Rollers. He began his career with the Canadian Broadcasting Corporation, working there for more than a decade. He graduated from the University of Ottawa and holds honorary doctorates from the University of Ottawa and Fordham University. He has worked with the humanitarian organization World Vision since the early 1980s, and has contributed to various other philanthropic organizations, including the USO, UNCF, National Geographic Society, and the Hope of the Valley Rescue Mission. Originally from Sudbury, Ontario, he resides in Los Angeles with his wife, Jean.

"[A] moving memoir…[a] friendly, often funny account marked by a reluctance so deep that it confers a curious integrity upon the celebrity tell-all...In the autumn of the media patriarchs, [Trebek] stands practically alone, untinged by scandal. His authority derives from his defense of facts, not their distortion." —Parul Sehgal, The New York Times

"Alex Trebek's memoir is everything a Jeopardy! fan could want...It’s an amusing and at times sobering series of vignettes—a quickly inhaled highlights reel of Trebek’s life...[He] quotes Mark Twain, Malcolm Gladwell and Chinese proverbs, and he shows off a quick wit and reverence for intellect...The behind-the-scenes intel is fun, especially for longtime fans of the show. But the rare insights into Trebek’s personal life are far more revealing...After nearly four decades at the lectern, Trebek is more than the face of Jeopardy!—he’s its heart. He’s so synonymous with the show, and the charm that’s made it an evening ritual, that even after a satisfying memoir, at least one question remains. How does the show continue without him? Give a ‘daily double’ to whomever has the answer for that one." —Angela Haupt, The Washington Post

“[Trebek’s] story reads less like the typical name-dropping, vice-fueled celebrity memoir and more like one of a warmhearted, down-to-earth guy who feels lucky to have touched lots of lives as the host of a wildly popular quiz show for the past 36 years…The fact that he's undergoing chemotherapy for his stage 4 pancreatic cancer, a painful experience that has taken a serious emotional and physical toll, adds a bittersweet and poignant note to his tale. That said, Trebek, who has a great sense of humor, also offers a lighthearted look at many parts of his long life…And fans will eat up his memories of show legends such as Ken Jennings and James Holzhauer.” —Christina Ianzito, AARP

"As a piece of writing, The Answer Is… goes down easy...But for all its breeziness, the memoir does the work of fleshing out a character with whom millions of Americans have spent their evenings with since the 1980s...Trebek had brushed off previous opportunities to write a memoir, but his diagnosis last year with stage IV pancreatic cancer changed the calculus. He received an outpouring of public support, which nudged him into opening up. But opening up doesn’t mean conjuring angst where it doesn’t exist. ‘I don’t have a lot of ghosts,’ he writes—believably, somehow. ‘I don’t have any bad memories that affect my life. It’s all good.’ Trebek writes frankly about the darkness he’s facing: the side effects from chemotherapy, and the conversations with his family about when to stop treatment. But he also seems uncommonly prepared for the end of the game."—Ruth Graham, Slate

"For anyone who enjoys watching Jeopardy!—or has ever wondered about the sincere, mustachioed man at its helm—The Answer Is... is an illuminating look at the life and philosophy of Trebek." —Patrick Ryan, USA Today

“Alex Trebek is the one providing the answers and questions in a new memoir that should reinforce his admirers' expectations about the ever-steady Jeopardy! host. The concise chapters, with titles including ‘What is a Mentor?’ and ‘The Answer is Family’ and ranging from a few paragraphs to a few pages, make for a readable but not slapdash approach...Trebek’s philosophical bent emerges clearly in the memoir, as he shares his perspective on human nature, spirituality and the value of knowledge." —Lynn Elber, Associated Press

“Trebek is well aware of what he has come to represent to viewers over his 36 years as the host of Jeopardy! He’s the reliable figure you can count on to appear on your television each weeknight, ‘not so much as a showbiz personality but as an uncle,’ he writes. He’s not intimidating. He’s a ‘second-tier celebrity.’ Part of the family. He leans into this persona in the book, offering up wholesome tidbits about how he’s happiest sitting on the swing in his backyard or eating fried chicken and broccoli for dinner…Trebek is candid in writing about the toll cancer has taken on his body. In one particularly moving section, he reveals that one day on set his stomach cramps were so excruciating that he collapsed on the floor of his dressing room, crying and writhing in pain. Producers suggested they cancel the taping, but he insisted he continue working—something that has, inexplicably, helped to ease his physical ailments.” —Amy Kaufman, The Los Angeles Times

“[H]ow did this French Canadian son of a Ukrainian immigrant become the authoritative voice of American knowledge? Trebek’s charming memoir, The Answer Is…: Reflections On My Life, offers these answers, phrased, of course, in the form of a question.” —Rien Fertel, The A.V. Club

“It probably won't surprise you to learn that Alex Trebek’s new memoir doesn't contain any particularly scandalous revelations or explosive confessions. The Answer Is… is a look back through the life of a man who, by his own admission, thinks his life is ‘not particularly exciting.’ But in 80 years on this earth and 36 years hosting Jeopardy!, you're bound to have a few interesting stories to tell, and Trebek has more than a few.” —Tyler Aquilina, Entertainment Weekly

"Alex Trebek has been in the spotlight for more than 30 years but has never been more candid than in his new book, The Answer Is…: Reflections on My Life...[An] eye-opening memoir.” —Meredith Nardino, US Weekly

“We’ll take great stories for $1,000 please. The iconic Jeopardy! host is out with his first memoir. It’s filled with revealing anecdotes about his personal life, his battle with cancer, and his experience working on everyone’s favorite quiz show. The answer is…a weekend spent glued to this book.” —The Skimm

Reflections on My Life

By Alex Trebek
LIST PRICE £11.99
PRICE MAY VARY BY RETAILER