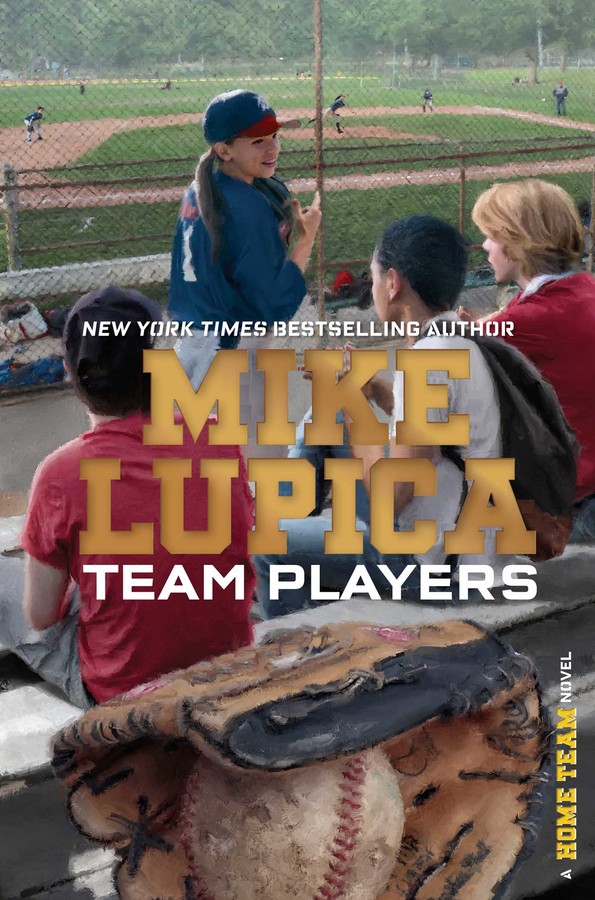 Cassie must learn that you can’t “fix” someone else after a girl with Aspergers joins her softball team in the fourth and final book of the Home Team series from New York Times bestselling author and sports-writing legend Mike Lupica.

Cassie Bennett is great at being in charge. She always knows what to do to lead her teams to victory, keep her many groups of friends together, or fix any problem that comes her way. So when Sarah Milligan, an autistic girl with unreal softball skills, joins Cassie’s team, Cassie’s sure she can help her fit in with the team.

But before long it’s obvious that being around so many people is really hard for Sarah, and the more Cassie tries to reach out and involve her, the more Sarah pushes her away, sometimes literally. It doesn’t help that Cassie’s teammates aren’t as interested in helping Sarah as they are in making sure they make it to the new softball All-Star Tournament that’ll be televised just like the Little League World Series.

Soon no one besides Cassie seems to even want Sarah on the team anymore, and the harder Cassie tries to bring everyone together, the worse things seem to get. Cassie Bennett never backs down from a challenge, but can she realize that maybe the challenge isn’t fixing a problem in someone else, but in herself? Or will her stubbornness lead her to lose more than just softball games?

As an outstanding athlete and leader, Cassie has always had lots of friends. She’s felt right at home on her softball team where the other girls like and respect her. But everything changes the summer before high school when Cassie tries to befriend Sarah, a talented new teammate who has autism. Others on the team reject Sarah as odd and awkward, and they shun Cassie after she stands up for the new girl. Fortunately, Cassie can still count on her trio of close friends: Jack, Teddy, and Gus. She’s there for them when their baseball coach proves to be disastrous, and they have her back when Cassie finds herself, for the first time ever, as a lonely outsider in the sport she loves best.

1. Why does the author open with such a short chapter? What does the chapter foreshadow about the rest of the book? Analyze why the book is divided into three sections: Before the Season, During the Season, and After the Season.

2. What’s Cassie like as a person? What’s she like as an athlete? Describe her best friends and their friendships with Cassie. How do they help her through her difficulties?

3. Cassie’s father is the coach of her softball team. What’s their relationship like? Explain why he tells her, “‘I’ve never been prouder of you than I have this season.’”

4. Describe Sarah and how she interacts with the rest of the softball team. Why don’t the other girls like her? Why are they upset with Cassie for being friendly toward Sarah? Discuss the roles of Cassie’s father and Sarah’s parents in this situation.

5. Describe Cassie’s experience with Peter Rizzo, the boy in fifth grade who had autism. Why does Cassie now feel like she “hadn’t done enough” to make things easier for him? How does that influence her attitude toward Sarah?

6. After Sarah shoves Cassie, Cassie resolves to “fix this.” What does she want to fix? Why do you think she is so intent on fixing things in general? What does Cassie learn about herself from her interactions with Sarah?

7. Why does Kathleen lie about the incident in center field when she misses the ball? Why is Kathleen angry when Cassie believes Sarah? Describe the practice of “shunning” and why so many girls on the team start to shun Cassie. Why does the shunning finally end?

8. Cassie doesn’t speak up at first to say she believes Sarah about the incident with Kathleen in center field. Why does Cassie hesitate? How does Sarah feel about Cassie’s hesitation? How does Cassie try to make up for it?

9. Cassie’s parents have told her that “character was character even if you were alone in a room. It was about making the right choice, even when the right choice was the hardest.” What do her parents mean? How do their words influence Cassie’s choice to say she believes Sarah and thinks Kathleen lied? Do you think Cassie made the right decision in this scene? Name other instances when she or other characters make hard choices.

10. What issues does Sarah have with the way Cassie treats her? Give specific examples. Discuss whether you think Sarah’s criticisms are justified. Why doesn’t Sarah trust Cassie?

12. Why does Teddy want to quit his team? Why does Jack say that if Teddy quits, then Coach Anthony wins? Cassie’s advice to Teddy is that it’s about him being better than Coach Anthony and Sam. What does she mean? Discuss whether you agree with Jack and Cassie.

13. How does Jack become the coach of his own team? How do different people react to the idea? Do you think he does a good job as coach? What are some of the challenges to leading a team?

14. Teddy tells Cassie, “‘You found out what it’s like to be on the outside.’” What does he mean by that? Jack predicts that things will return to normal when they’re back at school, to which Cassie replies, “‘Yes, but do I want them to?’” Why does she say that? Why might change be a good thing? Name other scenarios in your life where this might be the case.

15. Discuss the conversation Cassie has with Sarah’s mother as they wait for Sarah to come home. What are Mrs. Milligan’s insights into Sarah’s mind and how to treat her? What does Mrs. Milligan see as the difference between sympathy and empathy? How does that apply to Cassie and Sarah?

16. Both Cassie and Jack are referred to as leaders throughout the book. How do they both show their leadership skills? In what ways can a leader influence other members of his or her team?

17. In the game where Kathleen is injured, Sarah chooses to help Kathleen rather than catch a ball; this leads to their team’s loss. Discuss why Cassie assures Sarah that “‘we did not lose.’” Relate this to Coach Bennett’s comment that “‘There’s all sorts of ways to win in sports.’”

18. Describe the scene during the second game with the Hollis Hills Yankees in which the ump incorrectly calls Sarah out. What does the scene show about Cassie and Sarah, and about how each of them has changed during the story?

What makes a great coach? Students should create ads for a middle school baseball or softball coach. The ad should describe a coach’s duties, list required experience, and emphasize what personal qualities are most important in a good coach.

What Autistic Kids Wish You Knew

Cassie goes online to find information on autism, including this ten-point article from Autism Speaks, the website she consulted. Have students read this article and then meet in small groups to discuss its content. They should talk about how the information relates to Sarah’s character and how having the information might have helped those around Sarah, including her teammates. (https://www.autismspeaks.org/blog/2016/04/02/10-things-people-autism-want-you-know)

Identifying with a Character

Have each student create a Venn diagram depicting the ways they are alike and different from one of the characters in the story. The diagram can show a variety of factors: personality traits, physical characteristics, likes and dislikes, family situations, and so on.

Hold a class discussion about the differences between sympathy and empathy. Then have students work in groups of three to create a fictional scene about a child facing a problem. The scene should show two characters who react differently, one with sympathy and one with empathy. The groups should act out the scenes for each other and talk about what they’ve learned.

In 2012, a California Little League team of twelve- to fourteen-year-olds was coached by two boys, one fourteen and one fifteen, as described in the newspaper article below. Should this phenomenon be more widespread? In your classroom, hold debates about whether kids should be able to coach teams made up of players of their own ages. Assign or have students choose sides to defend, and then marshal their arguments. Each side should talk about the possible advantages and disadvantages of kids coaching others, including the effects on the players and the league. (www.ocregister.com/2012/05/22/little-league-team-coached-by-kids-a-winner/)

This guide was prepared by Kathleen Odean. Kathleen, a school librarian for more than fifteen years, now presents professional development workshops on new books for young people. She chaired the 2002 Newbery Award Committee and is the author of guides to children’s books including Great Books for Girls, Great Books for Boys, and Great Books about Things Kids Love.