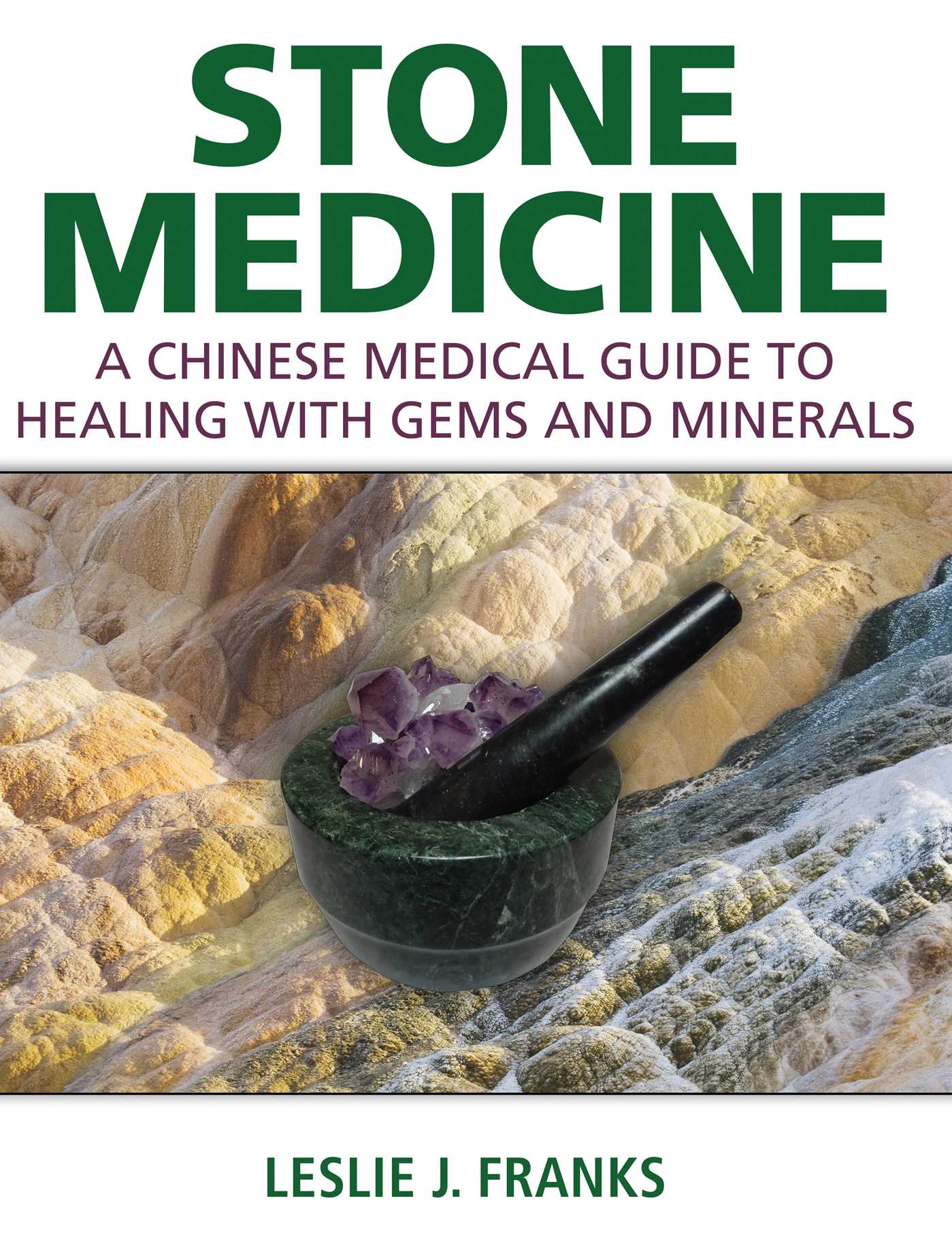 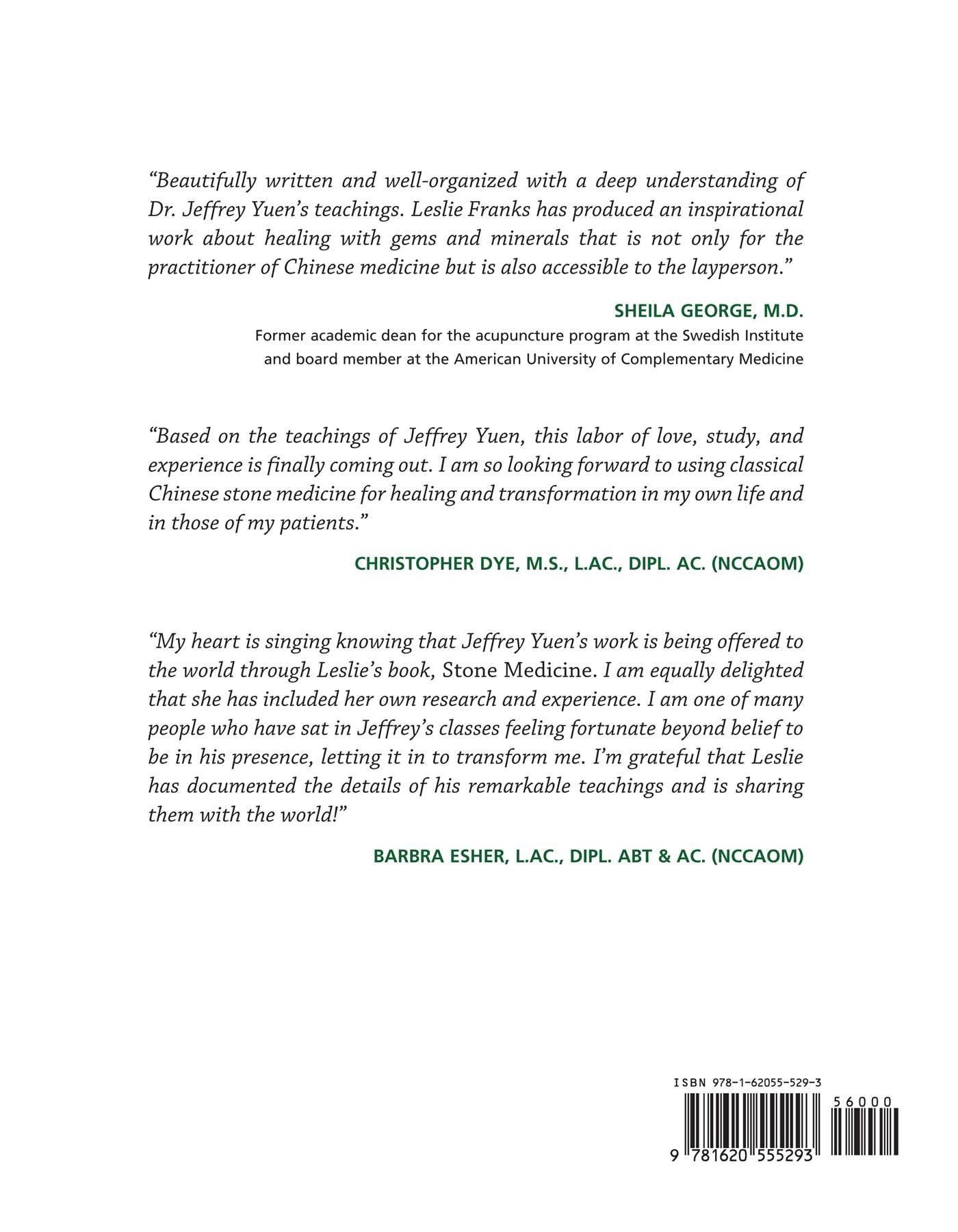 A Chinese Medical Guide to Healing with Gems and Minerals

In addition to herbalism and acupuncture, Chinese Medicine has a rich tradition of using stones as medicine, passed from generation to generation for thousands of years. In this comprehensive guide and extensive Materia Medica, Leslie J. Franks presents the Stone Medicine teachings of Dr. Jeffrey C. Yuen, an 88th generation Taoist priest from the ancient lineage of the Jade Purity School, which dates to the Han dynasty, 206 BCE. Detailing the therapeutic properties of 200 gems, stones, minerals, and crystals, Franks explains the physical, emotional, and spiritual conditions each stone can treat and how their color, form, hardness, and energetic qualities affect us according to Chinese Medicine. She examines the chemistry and sacred geometry of crystal structure, revealing how the minerals contained in the stones affect our physiology by supporting our Jing (Essence); by nourishing Qi (energy), blood, and fluids; and by clearing Wind, Cold, Damp, and Heat conditions that can lead to disease. Including a thorough primer on Traditional Chinese Medicine and backed by modern scientific research, this book explains how stones access our deepest layers, vibrating ever so slowly, to initiate deep lasting change.
Chapter 14

If quartz crystals represent perfection in the world of minerals, the transformative stones demonstrate the process by which perfection is accomplished. In Western terminology, this large group of stones is called chalcedony. It includes agate, chalcedony, jasper, and onyx. The stones are fundamentally the same--that is, a fibrous subcategory of quartz, all with similar hardness and all with a chemical composition of silicon dioxide. For the ancient Chinese, however, who saw consciousness and spirit in the natural world, the patterns, colors, and configurations these stones presented were indications of a process of refinement and evolution.

Most of the transformative stones form at the Source/Yuan, or igneous level, but their appearance shows a process of metamorphosis. The stones are quartz, but they do not form perfect crystals. They demonstrate a slow evolutionary process as the Earth adapts to change. They also represent a core tension of human life--the relationship between Water, our Essence, and its requirement to discover and express our deepest self, and Earth, with its requirements of living in society. Looking at the agates, with their banded, speckled, or patchy appearances, we can imagine the struggles and conflicts the stones experience during their creation--as they melt and solidify, compress and release, fuse and separate. Eventually the stones refine to become the strong, definitive colors of the jaspers; the translucent, homogenous colors of the chalcedonies; or the shining, intensely black onyx, which represents our deepest Essence: the Water energy of the Kidneys. The group as a whole matures to its ultimate perfection in the subtlety and elegance of jade, a stone held in the highest regard since the earliest history of the Chinese.

The use of jade in Chinese culture dates to the Neolithic period, when ancient populations considered the nephrite jade they were able to mine locally to be inherently more valuable than gold or silver. They used the stone to shape ritual objects and tools, and the quality of the carving gives evidence to a highly sophisticated civilization. Nephrite jade is extremely durable, as demonstrated by the many jade artifacts unearthed that date back to more than 1,000 years before the Common Era.

In the nineteenth century, a beautiful jade from Burma became popular among the royalty and Confucian scholars. It had clearer and bolder colors than the indigenous nephrite jade, and the bright emerald-green color, called imperial green, was much sought after. This is jadeite. It has a different chemical composition than nephrite jade, but this difference was unknown until later in the century.

Jade is associated with the upper dan tian. We use agates, jasper, and chalcedony for treating illness, but jade is an aspirational stone. It represents the possibility to ascend out of petty, selfish concerns and to exhibit qualities of behavior that benefit all humans.
Leslie J. Franks

“Beautifully written and well-organized with a deep understanding of Dr. Jeffrey Yuen’s teachings. Leslie Franks has produced an inspirational work about healing with gems and minerals that is not only for the practitioner of Chinese medicine but is also accessible to the layperson.”

– Sheila George, M.D., Former academic dean for the acupuncture program at the Swedish Institute and b

“Based on the teachings of Jeffrey Yuen, this labor of love, study, and experience is finally coming out. I am so looking forward to using classical Chinese stone medicine for healing and transformation in my own life and in those of my patients.”

“My heart is singing knowing that Jeffrey Yuen’s work is being offered to the world through Leslie’s book, Stone Medicine. I am equally delighted that she has included her own research and experience. I am one of many people who have sat in Jeffrey’s classes feeling fortunate beyond belief to be in his presence, letting it in to transform me. I’m grateful that Leslie has documented the details of his remarkable teachings and is sharing them with the world!”

“In addition to herbalism and acupuncture, Chinese Medicine has a rich tradition of using stones as medicine, passed from generation to generation for thousands of years. In this comprehensive guide and extensive Materia Medica, Leslie J. Franks presents the Stone Medicine teachings of Dr. Jeffrey C. Yuen, an 88th generation Taoist priest from the ancient lineage of the Jade Purity School, which dates to the Han dynasty, 206 BCE. Detailing the therapeutic properties of 200 gems, stones, minerals, and crystals, Franks begins with an extensive look at 15 different forms of quartz, followed by chapters on transformative stones, protective stones, nourishing stones, source energy stones, and alchemical stones.… this book explains how stones access our deepest layers, vibrating ever so slowly, to initiate deep lasting change.”

“This is a comprehensive manual for using crystals, gems and stones to address physical, emotional and spiritual health conditions. In addition to herbalism and acupuncture, Chinese medicine has rich traditions of using stones as medicine, passed from generation to generation for thousands of years. A thorough primer on Traditional Chinese Medicine that is backed by modern scientific research is included. ”

A Chinese Medical Guide to Healing with Gems and Minerals