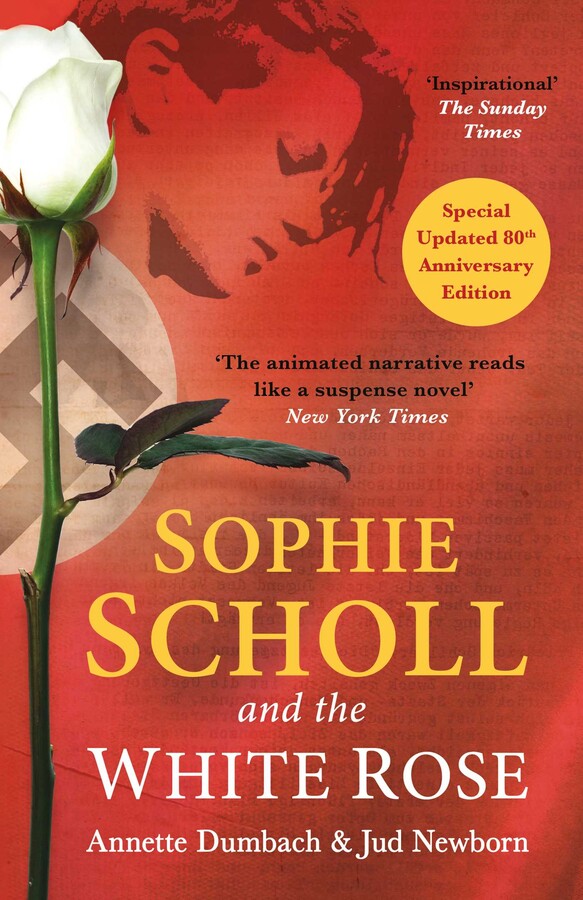 Sophie Scholl and the White Rose

By Annette Dumbach and Jud Newborn
LIST PRICE £4.99
PRICE MAY VARY BY RETAILER

This is the gripping story of the five Munich university students who set up an underground resistance movement in World War II, featured in the award-winning Oscar-nominated film, Sophie Scholl - The Final Days. This 75th anniversary edition commemorates the 75 years since their arrest & execution in 1943. This updated edition includes a new preface and more photos.

Annette Dumbach, is an author, journalist, and University lecturer who currently resides in Munich.

'Powerful and compelling... Among the indispensable literature of modern political culture.'

'Sophie Scholl and the White Rose is among the most compelling books to focus on such exemplary role models. This 75th Anniversary edition deserves to be read and read again.'

'This is a wonderful book. The story of the White Rose is so important.'

'As this compelling account makes clear, the White Rose students still have the power to inspire people from all walks of life to speak out against injustice.'

'A dramatic story of courage during the darkest period of the 20th Century... And it's a story with new chapters unfolding. This book is a fundamental resource and a memorable read.'

'Regrettably, it's time to remember the rise of Nazism and what brave people did to stand up to it, only to find out they stood up too late. It's all there in Sophie Scholl and the White Rose.'

'Illuminating, intellectually stimulating, deeply moving - not only concerning the brave actions of the White Rose resistors, but each listener's own consciousness.'

'You are making a huge intellectual impact with this book.'

'The 75th anniversary edition of this invaluable book and the dynamic lecture program by Dr. Jud Newborn that goes with it vibrantly bring to life the riveting story of The White Rose students…. I consider it Indispensable for college course assignments. It has the power to positively transform hearts, minds and lives.'

'Your book and lectures on the White Rose awakened and inspired me as I have not been in years. I want the whole world to hear this message.'

'I've been so inspired reading [this] splendid book... The 75th Anniversary edition obviously calls out for a Hollywood feature film, and will remind new generations how important it is to speak out against hatred and injustice, wherever they may find it.'

'Sophie Scholl and the White Rose... remains relevant in our own time. Whatever medium is used to tell this story - perhaps with this book and Jud Newborn’s new discoveries as the basis for a major motion picture - it needs to be told again and again.'

'Jud Newborn and Annette Dumbach's powerful, co-authored book is even more compelling today. It will remain relevant as long as we need inspiring examples of those who risk themselves in the fight against oppression and bigotry. The White Rose students epitomize the need to be "Upstanders", not "Bystanders."'

'Like my father, the shining example of the White Rose reminds us of the ever-present need for those who dare to speak out against injustice. Had it been available while he was still living, I’m certain my father would have been eager to take a role in a Hollywood film version based on this book.'

'This book tells such an amazing true story, and with such visual power, that now more than ever, it must become the basis for a major Hollywood motion picture about these incredibly courageous heroes.'

'When I read [this] powerful book… I felt grateful to these young anti-Nazis who rejected Hitler’s racism and embraced all of humanity, regardless of background, religion or sexual orientation. We need to be reminded and inspired by this today more than ever, so I welcome wholeheartedly this new 75th Anniversary edition, and the Hollywood motion picture I hope it will generate.'

'I found this book so suspenseful that I couldn’t put it down... All the more reason this book should be read and its story brought to the awareness of the widest public.'

'A subject of the utmost importance.'

'I started your gripping book about the White Rose yesterday and can't put it down.'

'The lessons to be learned from this book and Dr. Newborn’s lectures are invaluable, especially in light of current world events and the need for new heroes to step forward.'

'Riveting and incredibly moving. Absolutely and most highly recommended!'

'Winning the return of Gustav Klimt's 'Portrait of Adele Bloch-Bauer' to its rightful Jewish owner was one of the most profound events in my life. Another was the unforgettable experience of attending a performance in Vienna of a chamber opera about the White Rose... Their message is never to remain silent, but to stand defiant, even to overwhelming power.'

'Masterful… This revised edition contains a ton of new information, a reworked introduction, a foreword by Studs Terkel, additional photos, and much more, expanding this remarkable tale. Essential.'

'Newborn and Dumbach weave the personal story of each resistance member into a thrilling narrative rich in historical details. The White Rose members prove that one can resist even when the opportunities to do so are extremely limited.'

'The White Rose was the only German resistance group to protest 'The Final Solution to the Jewish Problem.' Sophie Scholl, Hans Scholl and their colleagues demonstrated courage and conviction, morality and decency in a world bereft of such qualities. They also gave lie to the myth that 'we did not know' or 'nothing could be done' or 'protest was futile.’ Their deeds were exemplary then, and have only grown in significance. Sadly they seem more urgent, more compelling at this moment in time, three quarters of a century later.'

'We welcome the 75th Anniversary edition of Sophie Scholl and the White Rose. During the Nazi era itself, these student risked their lives to awaken their own slumbering countrymen to the truth - calling the mass murder of Jews, for the first time and even before the Nuremberg Trials, 'a crime unparalleled in history, a crime against the dignity of man.’ The words of these German students resound ever more strongly, helping us to fight anti-Semitism and other hatreds today and, if need be, tomorrow. When people ask what could have been done? How could Hitler have been opposed? Given them Sophie Scholl and the White Rose. That will answer their question.'

'The White Rose stands for freedom of thought, moral courage, tolerance and the political responsibility of every individual. Remembering the resistance group also means standing up against racism, antisemitism and authoritarian regimes. Sophie Scholl and the White Rose is an important contribution to this. The White Rose Foundation would like to thank you for your outstanding work!'

'The valiant students of the White Rose anti-Nazi resistance risked all odds to ‘speak truth to power' while so many others who might have protested chose to remain silent about the destruction of their own civil rights as well as the annihilation of Europe’s Jews. As this compelling account makes clear, the White Rose students still have the power to inspire people from all walks of life to speak out against injustice, reminding us in these troubled times that this is the American Way.'

'This book, chapter by chapter, builds an incontestable argument for the power and possibilities of action over passive acceptance and apathy.'

'This is a story that commands our attention.'

Sophie Scholl and the White Rose

By Annette Dumbach and Jud Newborn
LIST PRICE £4.99
PRICE MAY VARY BY RETAILER