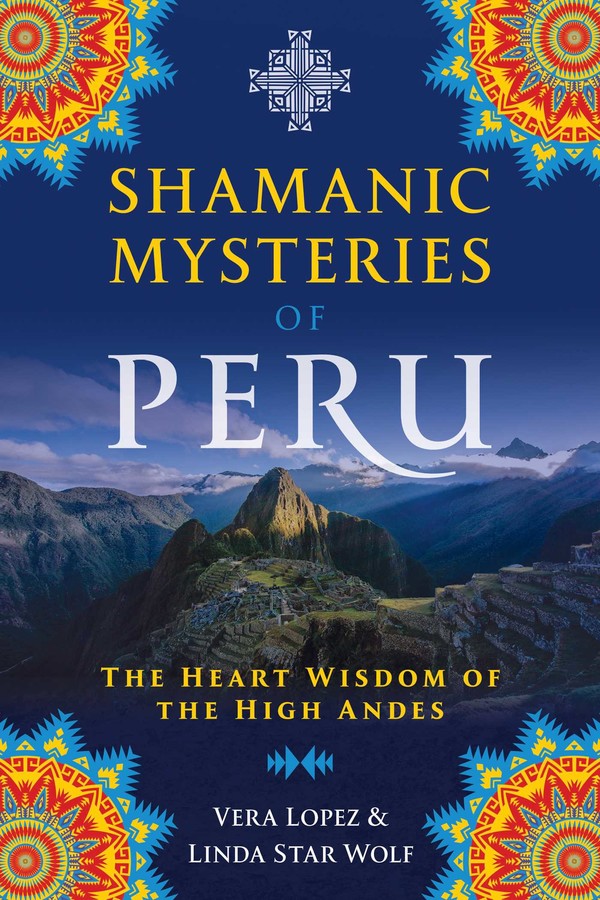 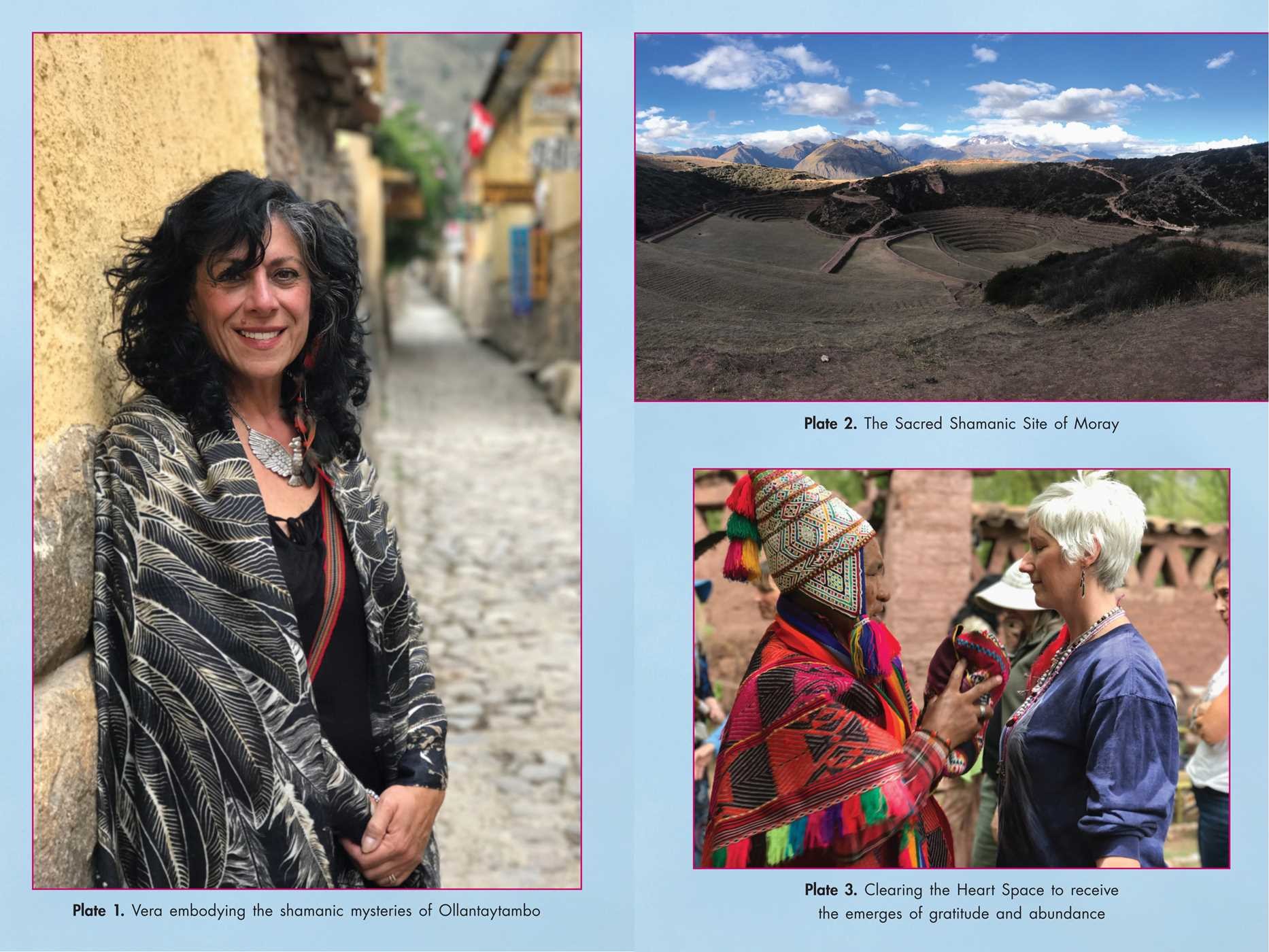 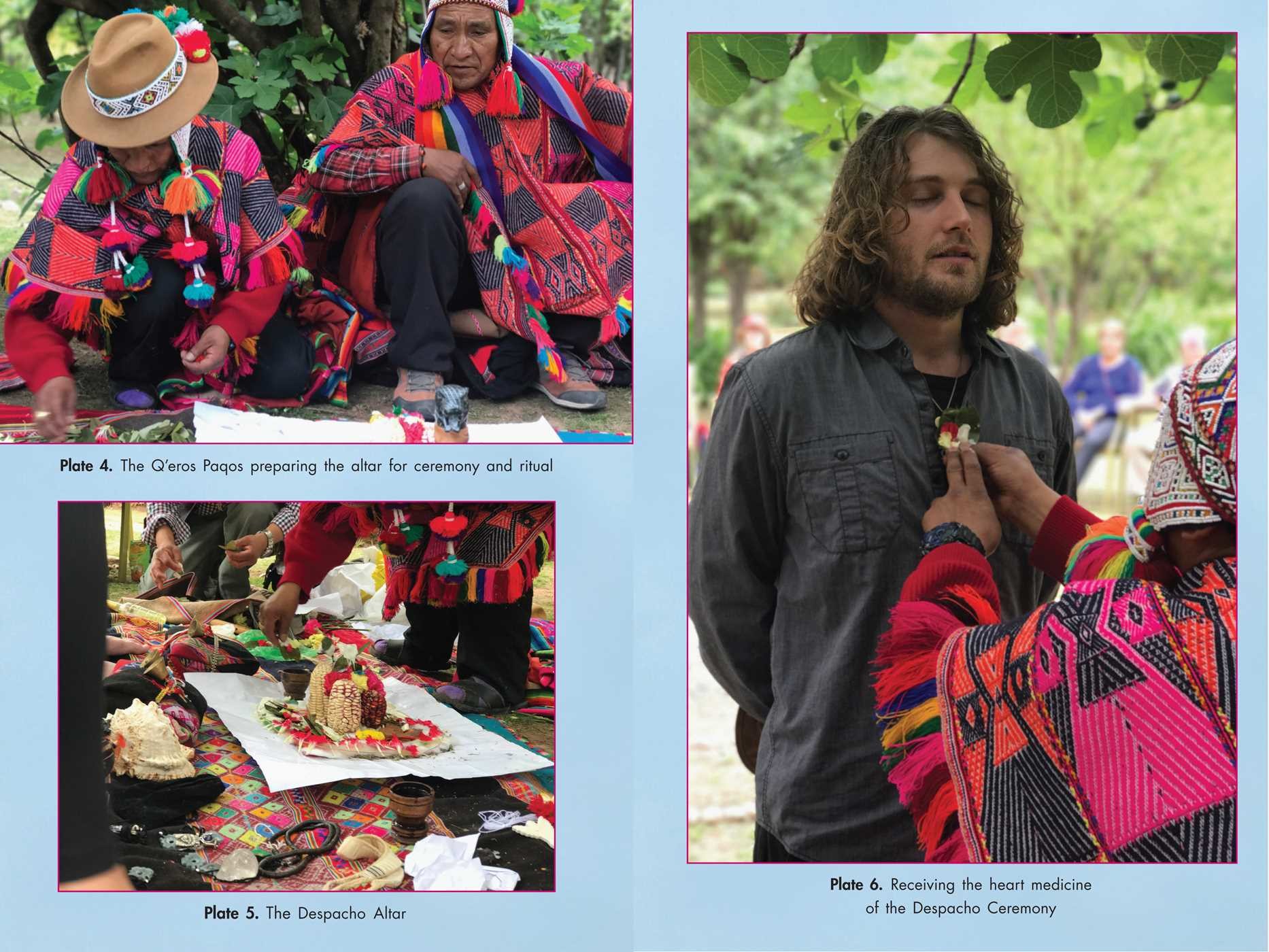 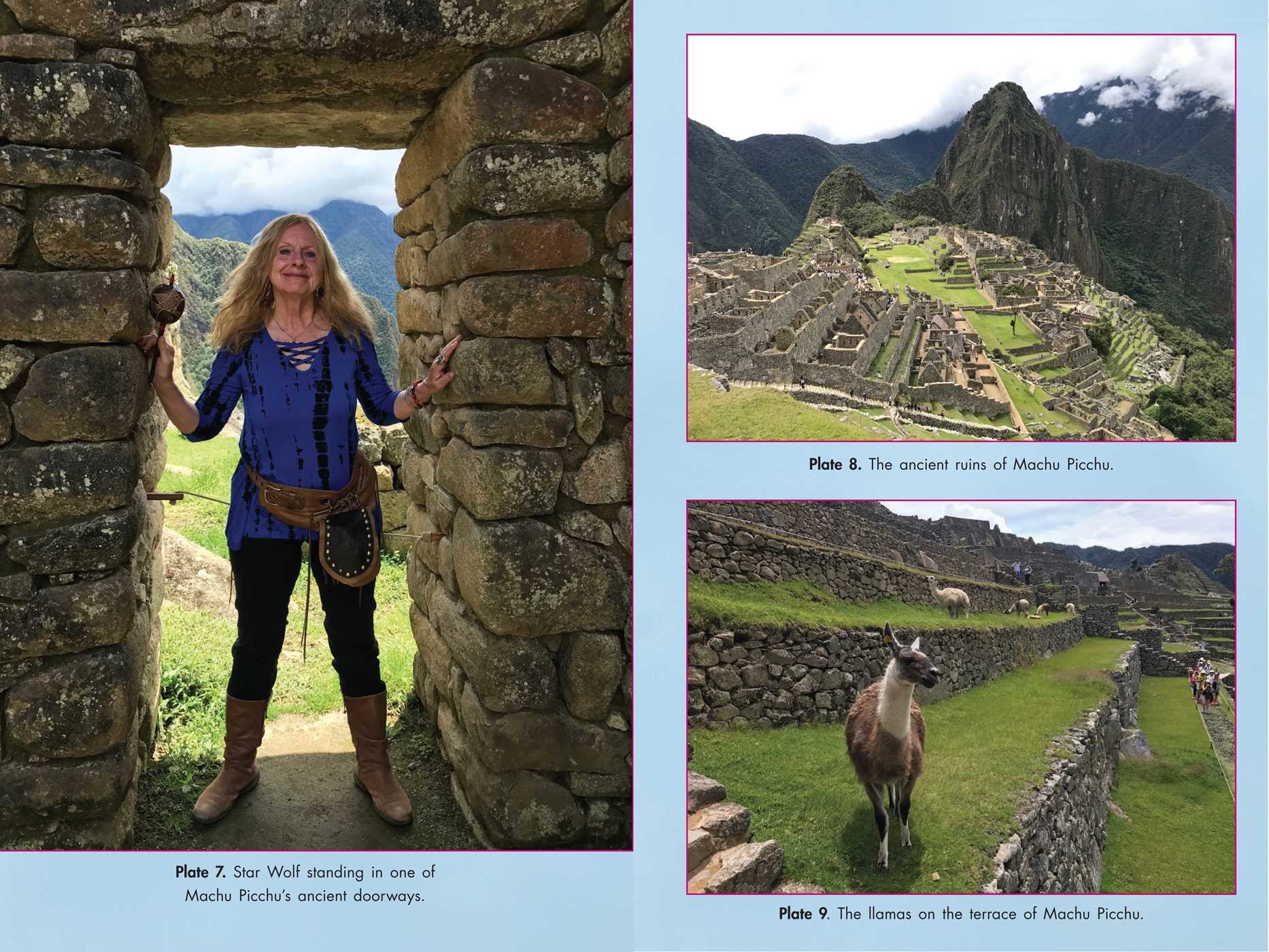 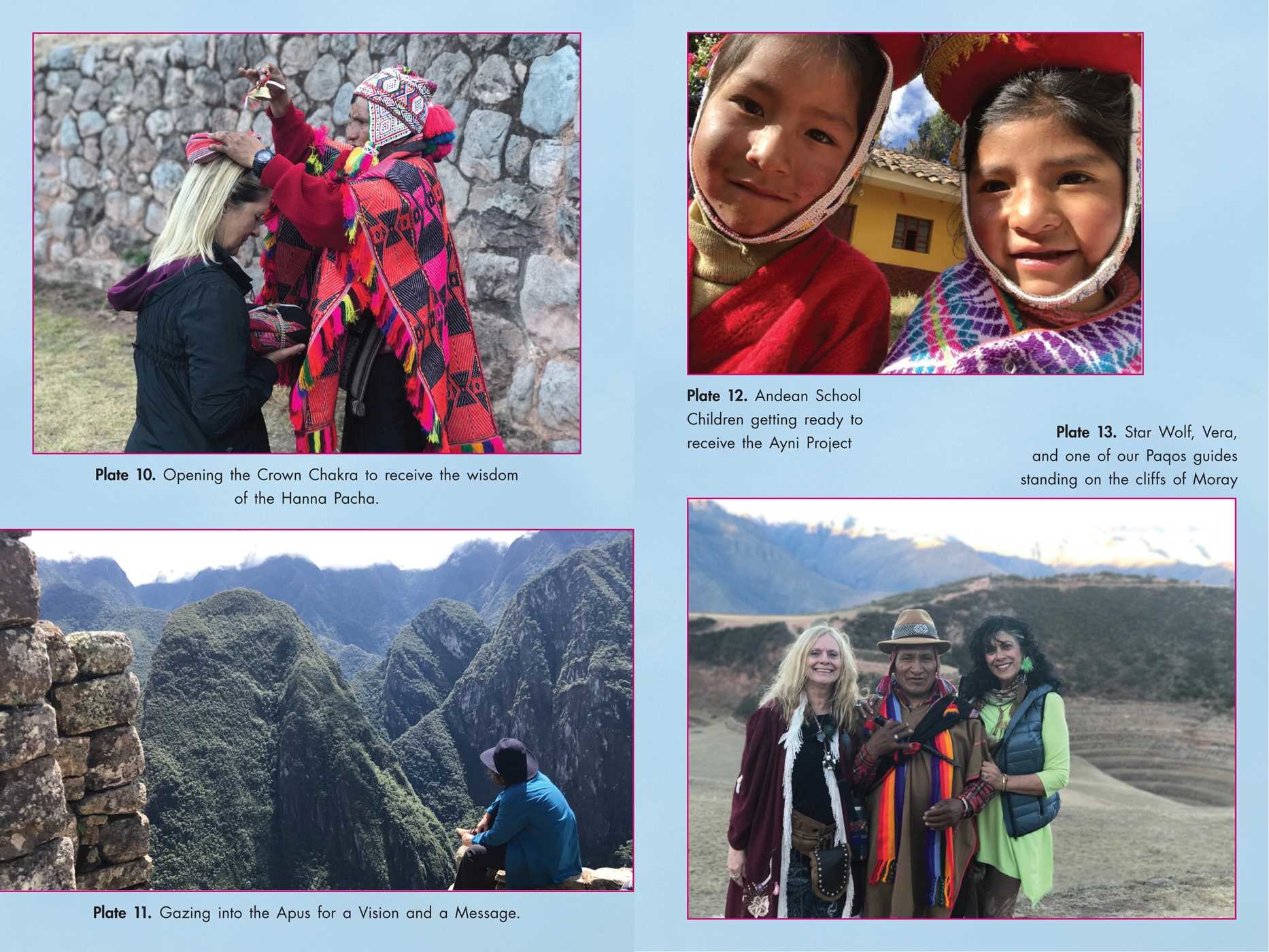 The Heart Wisdom of the High Andes

• Explores the cosmology and core shamanic beliefs of the Andean people, including Pachamama and power animals such as condors, snakes, hummingbirds, and pumas

• Takes you on an intimate journey through the sacred sites, temples, and power places of Peru, including Machu Picchu, Cuzco, Ollantaytambo, Sacsayhuamán, Písac, Lake Titicaca, and more

The Andes Mountains of Peru are rich with ancient shamanic traditions, sacred places, and heart wisdom passed down from the Inca and safeguarded for generations by the Q’eros nation. In this experiential guide to the wisdom and practices of the Andean people and their sacred land, Vera Lopez and Linda Star Wolf take you on an intimate journey through the sacred sites, temples, and power places of Peru, including Machu Picchu, Cuzco, Ollantaytambo, Sacsayhuamán, Písac, Lake Titicaca, and more. They show how each of these powerful sites holds an ancient wisdom--an initiation left behind by the Inca--and they share initiatory rites and shamanic journeying practices to allow you to integrate and embody the wisdom of each sacred place.

The authors explore the cosmology and core shamanic beliefs of the Andean people, including Pachamama, the Sacred Law of Reciprocity, the Serpent of Light, the Chakannah, and power animals such as condors, snakes, hummingbirds, and pumas. They examine healing practices and sacred plants of this tradition, including a look at the shamanic use of ayahuasca and San Pedro.

Offering direct access to the gentle heart of wisdom found within the ancient shamanic land of Peru, the authors show how the Andean shamanic tradition offers an antidote to the modern epidemic of Soul Loss by connecting us back to our authentic self and the universal principles of love, reciprocity, and gratitude.

From Chapter 4: The Three Worlds of the Andean Cosmology

In shamanic traditions all around the world, we see shamans viewing the Universe separated into three different levels of existence--an Upper World, a Middle World, and a Lower World. In each shamanic culture and society, the role of the Shaman is to walk between these different worlds, connect with the spirits and energies that reside within each of these realms, and bring the multidimensional wisdom and medicine that they find in these other worlds back to their tribes and communities.

In the shamanic tradition of the Andes, the shamans believe that the Universe is comprised of three different pachas. “Pacha” is the Quechua word for “earth” or “world.”

The three pachas of the Andean cosmology are:

The Hanna Pacha and the Upper World

The Guardian of the Hanna Pacha is the Condor.

Similar to the Eagle in the North American Shamanic Traditions, the Condor embodies a majesty and regality to the Andes people. Because the Andes people witnessed the Condor flying to great heights within the skies, and swiftly disappearing in the mists of the tallest mountains, they believed that the Condor was the only creature that could journey between this world and the world of the Gods, the Hanna Pacha.

Medicine Journey to the Hanna Pacha

In your Mind’s Eye, envision yourself high up within the Andes mountains, sitting upon a rock ledge that has been there for millennia. Looking out in front of you, you can see an ocean of mountains extending out as far as your eyes can see them. Carefully looking down below, you can make out the Urubamba River moving throughout the base of these mountains. From high up this ancient powerful river snakes through the mountains, looking like a silver snake winding its way through the Andes Jungle. Above you the mists and clouds gently descend down from the skies above.

As you breathe and take in the surroundings upon this high mountain ledge, you notice a condor flying off in the distance. You watch this majestic bird fly through the clouds and mountain tops, gliding through the currents of the wind. Moving with such grace and ease, you notice the condor is getting closer and closer to your ledge. You stand up and the condor flies in closer and lands upon your ledge. You and the condor exchange glances. Looking deep into the eyes of the Condor, you feel and know that you are in the presence of a divine being. This condor is large. Spreading out its wings, you realize that this condor is large enough to hold and carry you--a mythical creature from the other world.

The Condor turns back to look at you, welcoming you too jump upon its back. You approach and climb upon the giant condor and once you are settled and comfortable the condor leaps off the ledge and flies into the mists and into the ocean of mountains.

Flying high above the mountains and soaring through the mists, the condor shows you the portals and doorways to the hidden realms of the Great Above--the Hanna Pacha. The Condor takes you to the first door way, the door way of your Past. You and the Condor both fly through the portal and enter a scene from your past--perhaps this is a memory or experience from your childhood, or a series of events from a past life. Take note of where you are, what you are experiencing, what are you witnessing? Are there any feelings associated with this past memory? Take some time to drop into this past experience.

Vera Lopez is the founder of Spirits of the Earth, a travel company specializing in spiritual journeys to sacred sites. She is a transformation teacher, shamanic minister, and Andean priestess, who has received direct initiation from shamanic elders in several traditions, including the Q’eros of Peru. She lives in Sedona, Arizona.

Linda Star Wolf, Ph.D., has been a visionary teacher and shamanic guide for more than 35 years. The founder and codirector of Venus Rising Association for Transformation and the founder and president of Venus Rising University for Shamanic Psychospiritual Studies, she is the creator of the Shamanic Breathwork Process as well as the Shamanic Ministers Global Network and the Wise Wolf Councils. A spiritual granddaughter of Seneca Wolf Clan Grandmother Twylah Nitsch, Star Wolf is the author of Shamanic Breathwork and co-author of Visionary Shamanism, Shamanic Egyptian Astrology, Shamanic Mysteries of Egypt, and The Anubis Oracle. She lives at Isis Cove Retreat Center near Asheville, North Carolina.

The Heart Wisdom of the High Andes