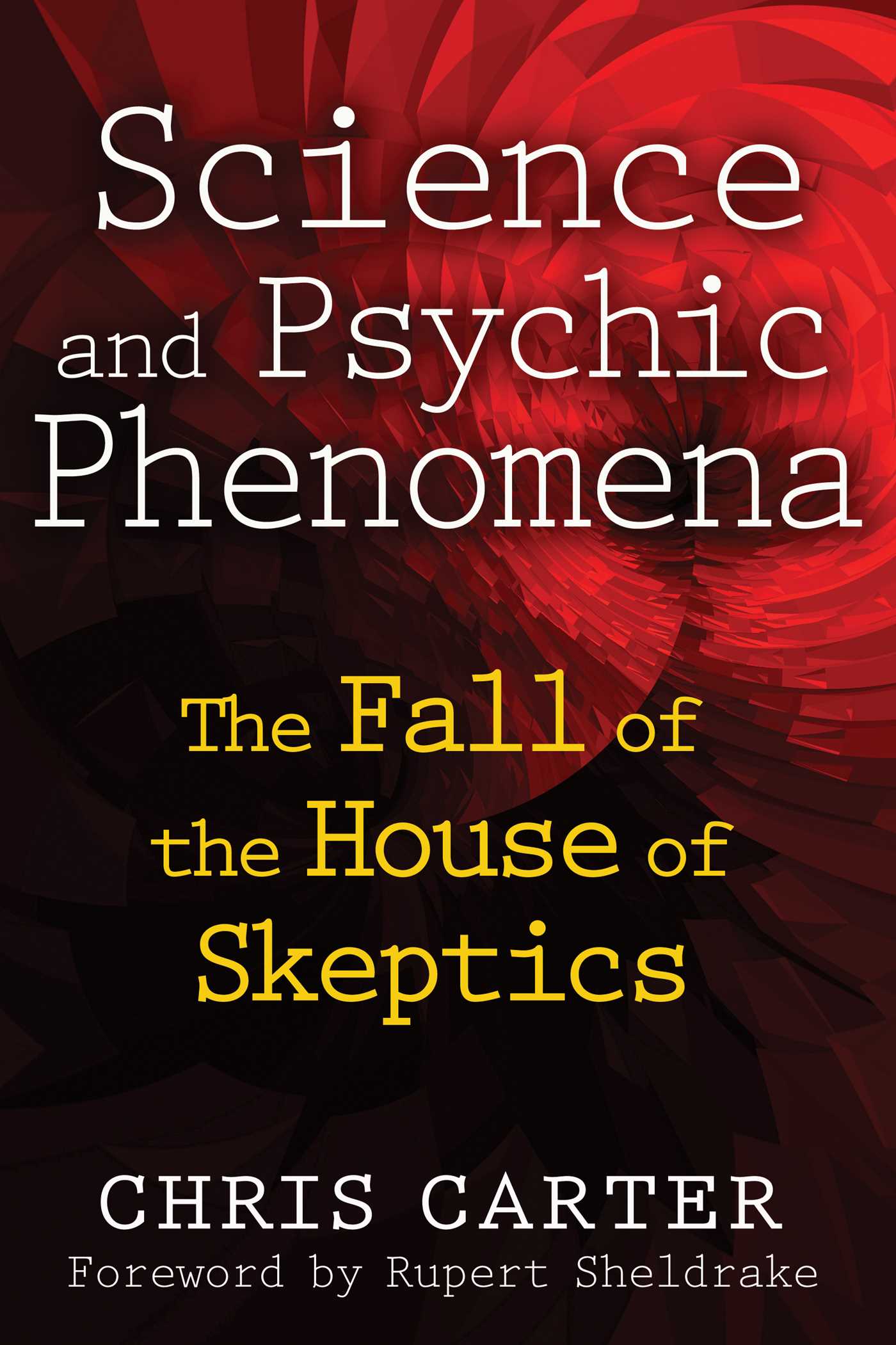 The Fall of the House of Skeptics

Reports of psychic abilities, such as telepathy, clairvoyance, precognition, and psychokinesis, date back to the beginning of recorded human history in all cultures. Documented, reproducible evidence exists that these abilities are real, yet the mainstream scientific community has vehemently denied the existence of psi phenomena for centuries. The battle over the reality of psi has carried on in scientific academies, courtrooms, scholarly journals, newspapers, and radio stations and has included scandals, wild accusations, ruined reputations, as well as bizarre characters on both sides of the debate. If true evidence exists, why then is the study of psi phenomena--parapsychology--so controversial? And why has the controversy lasted for centuries?

Exploring the scandalous history of parapsychology and citing decades of research, Chris Carter shows that, contrary to mainstream belief, replicable evidence of psi phenomena exists. The controversy over parapsychology continues not because ESP and other abilities cannot be verified but because their existence challenges deeply held worldviews more strongly rooted in religious and philosophical beliefs than in hard science. Carter reveals how the doctrine of materialism--in which nothing matters but matter--has become an infallible article of faith for many scientists and philosophers, much like the convictions of religious fundamentalists. Consequently, the possibility of psychic abilities cannot be tolerated because their existence would refute materialism and contradict a deeply ingrained ideology. By outlining the origin of this passionate debate, Carter calls on all open-minded individuals to disregard the church of skepticism and reach their own conclusions by looking at the vast body of evidence.

Chapter Nine
The Roots of Disbelief

Say this about assertions that aliens have been, are or will soon be landing on Earth: at least a scenario like that of “Independence Day” would not violate any laws of nature. In contrast, claims in other fringe realms, such as telepathy and psychokinesis, are credible only if you ignore a couple or three centuries of established science.
--Sharon Begely, “Science on the Fringe,” Newsweek, July 1996

Remarks such as the one from Sharon Begely’s article are common in the skeptical literature. Such remarks are based on the assumption that the existence of psi phenomena is somehow incompatible with fundamental, well-established scientific principles. So, no matter what evidence the parapsychologists produce, the skeptics stoically maintain their denial and doggedly search for any possible counterexplanation. As we have seen, Ray Hyman has simply run out of plausible counterexplanations, yet he refuses to accept the latest results from a long line of experiments as conclusive. He seemed to consider himself the spokesperson for mainstream scientists when he wrote recently in the Skeptical Inquirer: “What seems clear is that the scientific community is not going to abandon its fundamental ideas about causality, time and other principles on the basis of a handful of experiments whose findings have yet to be shown to be replicable and lawful.” (At the time Hyman wrote this article [1996] the “handful of experiments” included 61 independent Ganzfeld experiments, 2,094 PK experiments using random event generators, and hundreds of other experiments involving tossing dice, dream research, and remote viewing.) Although surveys consistently show that most people either accept the reality of ESP or have had psychic experiences themselves, remarks such as this in the skeptical literature can give one the impression that all such phenomena are “scientifically impossible.”

But many mainstream scientists do not hold this opinion. Two surveys of more than 500 scientists in one case and more than 1,000 in another were made in the 1970s. Both surveys found that the majority of respondents considered ESP “an established fact” or “a likely possibility”: 56 percent in one and 67 percent in the other. Yet if most scientists are open to the possibility of psi, how can we account for the following story?

Robert Jahn was dean of the School of Engineering and Applied Science at Princeton University and a noted authority on aerospace engineering with a long record of work for NASA and the Department of Defense when he decided that certain parapsychological problems were worth investigating. Did his colleagues applaud his pioneering spirit? Not exactly. They as much as said he was crazy and a disgrace to science and the university. The university even convened an ad hoc committee to oversee his research--something unheard of for a scientist of his stature.

And yet not all scientists reacted this way, as Jahn pointed out in a 1983 address to the Parapsychology Association. Referring to his Princeton Engineering Anomalies Research program, he said, “We have had commentary on our program from no less than six Nobel laureates, two of whom categorically reject the topic, two of whom encouraged us to push on, and two of whom were categorically evasive. So much for unanimity of high scientific opinion.”

However, despite the willingness of many scientists to express favorable opinions toward psi research, parapsychology courses are not routinely taught at universities; there are only two labs conducting full-time psi research in the United States, and only a handful of such labs in the entire world. One explanation for this (and for Robert Jahn’s experience) is that skeptical opinions of psi seem more common among the administrative elite than among ordinary working scientists. Sociologist Dr. James McClenon surveyed the council and selected section committees of the American Association for the Advancement of Science (AAAS) in 1981. He found that these scientists were more skeptical of ESP than scientists in general, with just under 30 percent believing that ESP was “an established fact” or “a likely possibility.” Surveyed members in the social sciences (where parapsychology courses would normally be categorized) were even more skeptical (20 percent believers) than those in the natural sciences (30 percent believers). Worried about the reputation of their schools and labs, administrators seem far more reluctant to express favorable opinions of psi research than ordinary working scientists.

The skepticism of those who run the scientific establishment is surely one reason why, throughout its history, the resources devoted to psi research have been extremely meager. Psychologist Sybo Schouten compared the funding directed toward parapsychology over the one hundred years spanning 1882 to 1982 and found that it was approximately equal to the expenditures of two months of conventional psychological research in the United States in 1983. The other reason funding is difficult to come by is that many private and public funding agencies have no wish to be associated with what the skeptics call “pseudoscience.” Is it any wonder they feel this way? Not when scientific journals continue to publish hostile attacks on the scientific validity of parapsychology. For instance, the prominent journal Nature published the following in a commentary by skeptical psychologist David Marks:

Parascience has all the qualities of a magical system while wearing the mantle of science. Until any significant discoveries are made, science can justifiably ignore it, but it is important to say why: parascience is a pseudo-scientific system of untested beliefs steeped in illusion, error, and fraud.

Clearly then, many scientists find the claims of parapsychology disturbing. The existence of psi implies that the minds of people can sometimes communicate, perceive events, and influence objects without the use of the five ordinary senses or their limbs. Science in its present state cannot explain these phenomena. This in itself should not be a problem: there are plenty of other phenomena that science cannot currently explain, such as consciousness, the placebo effect, and the fact that the expansion of the universe appears to be accelerating. But is the existence of psi in conflict with well-established scientific principles?
Chris Carter

Chris Carter received his undergraduate and master’s degrees from the University of Oxford. He is the author of Science and Psychic Phenomena and Science and the Near-Death Experience. Originally from Canada, Carter currently teaches internationally.

“Chris Carter is a one-man wrecking crew for the time-worn, tedious, petulant, and often flimsy complaints of the die-hard skeptics. A science of consciousness is doomed to be incomplete without taking Carter’s keen insights into account.”

– Larry Dossey, M.D., author of Healing Words and The Power of Premonitions

“Carter confronts legitimate criticism with solid scientific evidence and deftly exposes the anti-science stand of the dogmatic skeptics. He makes a compelling case for taking the science of parapsychology seriously. . . . A must-read for anyone interested in the true state of this important debate.”

– Richard Broughton, Ph.D., author of Parapsychology: The Controversial Science and senior lecturer in

“The controversy surrounding psychic phenomena (psi) is both long and complicated. Chris Carter reviews the many elements of the controversy in great detail, but in a manner that is also readable and entertaining--a difficult feat. I found his explanation of quantum theories of psi, for example, exceptionally clear, and it resolved some confusion I had about these theories from reading other sources. Carter adheres strictly to valid scientific and philosophical principles in arguing for the reality of psi and the legitimacy of parapsychology as a science--no retreat into New Age metaphysical mumbo jumbo--and he doesn’t overstate his case. Any reader who can approach this controversial subject with an open mind will find Carter’s book immensely rewarding.”

“I highly recommend this book to anyone who is truly open-minded about whether or not psychic abilities exist. Chris Carter takes the reader on an insightful journey that weaves together history, scientific data, modern physics, psychology, and philosophy of science. He convincingly shows that it’s now possible to replace belief-based opinion with solid science when discussing the possible reality of psychic phenomena.”

– Jessica Utts, Ph.D., professor of statistics, University of California, Davis, and author of An Asse

“Chris Carter has put together quite a treatise. In thoroughly readable, engaging, and clear prose, he provides an erudite and comprehensive review of the skeptical and scientific studies of events that don’t fit present paradigms. Despite having researched the subject extensively myself, I found a deep well of new information. Carter’s book is both scholarly and entertaining.”

“This book is a must have for any serious paranormal researcher and I would recommend it to anyone to open their eyes and learn about why the paranormal always seems to be getting such a bad wrap. It was an eye opener of education and wisdom and knowledge and I could easily read it again and again...”

“[Chris Carter's] review of the debate and its outcome makes for a fine, passionate survey recommended for science and new age holdings alike!”

“Carter methodically and masterfully reveals that the skeptic’s position is increasingly untenable. . . . A refreshingly rational and well written investigation of the science of psi.”

“Chris Carter’s Science and Psychic Phenomena is a must read for anyone who wishes to penetrate the distortions and lies of the skeptics regarding psychic phenomena. Clearly written, and a pleasure to read!”

The Fall of the House of Skeptics