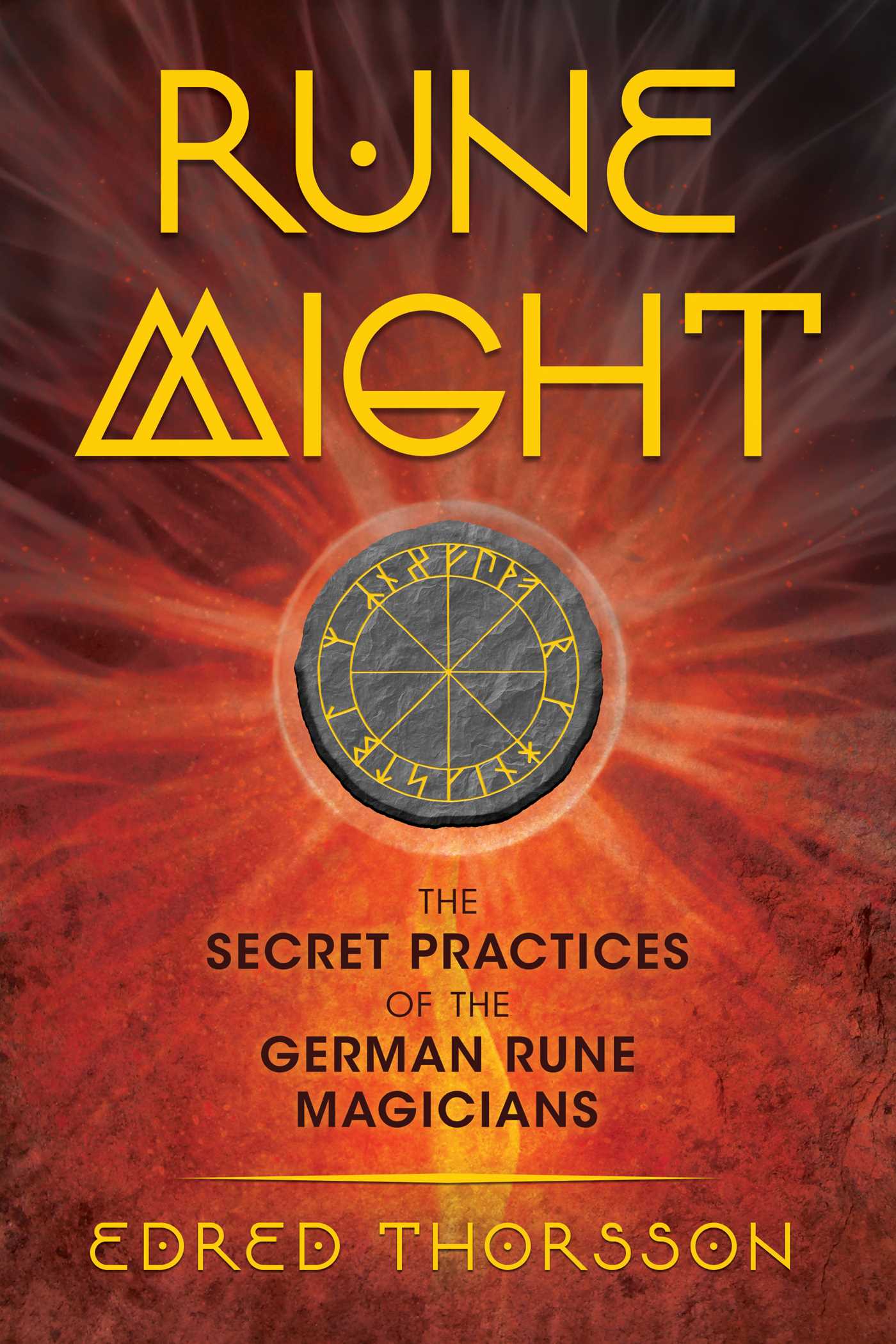 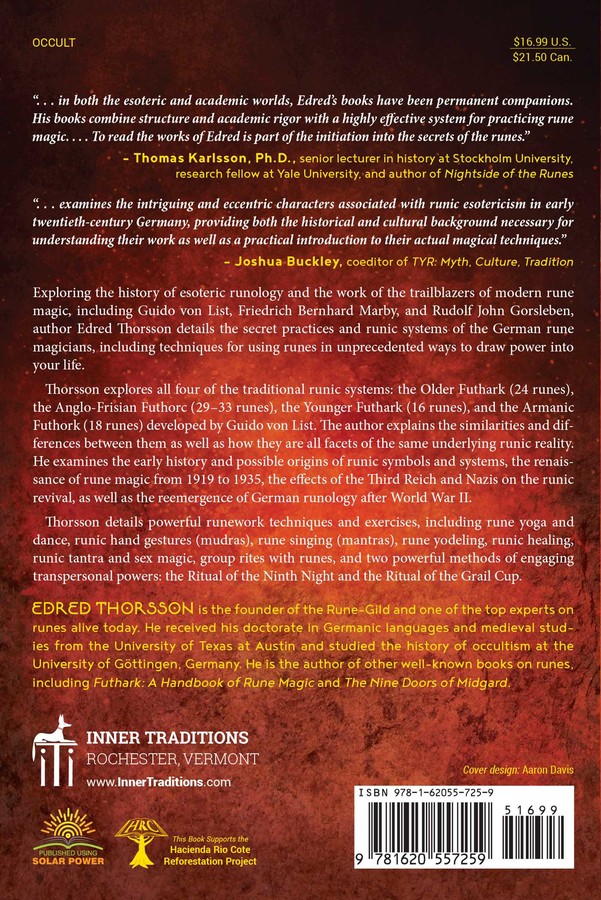 The Secret Practices of the German Rune Magicians

By Edred Thorsson
LIST PRICE £12.99
PRICE MAY VARY BY RETAILER

A practical handbook to the history, exercises, and techniques of German rune work

Although the rune renaissance began blossoming in Anglo-American occult circles in the 1970s, the runes have been part of the occult revival in Germany since its beginning in the late 19th century, with roots that go back centuries further. Exploring the history of esoteric runology and the work of the trailblazers of modern rune magic, including Guido von List, Friedrich Bernhard Marby, and Rudolf John Gorsleben, author Edred Thorsson details the secret practices and runic systems of the German rune magicians, including techniques for using runes in unprecedented ways to draw power into your life.

By immersing yourself in the world of the runic pioneers and the practices they designed, you will emerge with a deeper understanding of runes as well as the magical world from which they emanate.
Part I

The chief mission of the runes, in the view of many of the German rune magicians, is to help reawaken the vital essence that was lost in times past. The runes are the mysteries and the key to the mysteries at the same time. They have existed eternally within the folk-soul of the Germanics and await only their full awakening.

Guido von List claims, based on the scriptural authority of the poem “Hávamál” that the 18-rune futhork is the original form of the runic system and that all others are derived from it by adding extra symbols. However, according to Friedrich Bernhard Marby the runes originated in the Mother-Land, which sank below the waves of the North Sea some 12,000 years ago. For Marby it was the 33-rune Anglo-Frisian Futhorc that came closest to the original form of the rune-row, although he thought that the original system must have contained even more signs.

The esoteric German traditions concerning the history of Germanic religion and magic (especially that of the runes) are based very much on the idea that the ancient ways were taken underground into the structure, myth, and ritual of the medieval Christian Church. At first these concealments were quite intentional and conscious on the part of the Armanen. These Armanen, or priests, “converted” to Catholicism and infused their religious symbolism and wisdom into that of the Church. But with time the keys to the hidden meanings of the original Armanic customs and practices were lost. However, the forms remained, and it is these forms that can now be unlocked with the knowledge provided by the runes and by the remanifestation of the Germanic folk-soul.

Long before the runic spring of the early part of this century, there was an earlier flowering of an esoteric runic tradition. This was essentially the work of the much neglected Swedish scholar and mystic Johannes Bureus (1568-1652). Bureus was one of the very first scholarly runologists. He collected many runic texts from Swedish runestones and began to interpret them in a well-informed manner. He also had a mystical side. Bureus was a Paracelsist and Rosicrucian, well-versed in the lore of the Cabala and magical techniques of Agrippa von Nettesheim. This was also the age of storgoticism--Great-Gothicism--the esoteric doctrine that the Goths (wrongly assumed to the same as the Swedes) were the once and future master-race. Bureus has become the “high priest” of this movement from his chair at the University of Uppsala. To Bureus the runes were the primeval script containing great mysteries that could be read from an initiated perspective. This he did through a system called “adalrunes,” which was in part a variation of the Cabalistic method known as temura. In recent years the Swedish scholar Thomas Karlsson has devoted two important studies to the work of Bureus.

German rune magic was revived not in the tradition of Johannes Bureus but through a synthesis of the school of German Romanticism and the occult revival of the late nineteenth and early twentieth centuries. Throughout the 1800s there was a growing interest in the ancient traditions of the North. This was in large part a reflection of the Romantic (some might call it “Germantic” or “Gothick”) urge to turn inward, into the depths of the self, in a quest for ultimate reality. In a way, this urge in the individual was reflected in the next highest organic unity--the nation, or folk. Thus the folk began to turn inward and seek within their own traditions and lore for that which they had formerly looked in vain outside themselves. Christianity and the traditions of the south of Europe had been found wanting--the truth was to be found within--and northward.

Traditional knowledge, as preserved within the folk itself, was quite decayed by this time. Centuries of ignorance and lack of training had left what remained of the folk traditions rather empty. The only possible exception to this would be the preservation of the family traditions of the German “occult nobility,” as represented by such claimants as Tamhari (Ernst Lauterer) and Lobesam (Karl Maria Wiligut). These men claimed to be the repositories of ancient initiatory family traditions, and if this were true they would be remarkable examples of how the ancient traditions were handed down along family lines. The traditions of Wiligut have been well explored in the book The Secret King. Similar traditions were, of course, often later to be claimed among early revivers of the “Wiccan” way in England in the 1940s and 1950s.

It is more usual, however, for men such as Guido von List to claim extraordinary powers of insight and vision, which enabled them to reconstruct the past through a combination of clairvoyance (insight) and research into the folk ways and ancient customs. An essential component in this idea is that these men were looking into their own national past, and hence to a past which was organically linked to their present reality. The late nineteenth century saw the coming of the occult revival to Germany. German-speaking central Europe (Germany, Austria, Switzerland, etc.) had long been a breeding ground for esoteric and magical schools. Agrippa, Paracelsus, Albertus Magnus, and Jakob Böhme had all been Germans, and the schools of Rosicrucianism and Illuminism had originated there as well. So the occult was certainly no stranger to the land when it bloomed forth in the late 1880s and 1890s, largely as an immediate by-product of the introduction of Theosophy to the region. This brought out into the open what had been much more secret up to that time. Magical and esoteric ideas later became something that could be openly espoused and promoted, and thus the foundations were laid for the “runic spring.”
Edred Thorsson

Edred Thorsson is the founder of the Rune Gild and one of the top experts on runes alive today. He received his doctorate in Germanic languages and medieval studies from the University of Texas at Austin and studied the history of occultism at the University of Göttingen, Germany. He is the author of other well-known books on runes, including Futhark: A Handbook of Rune Magic and The Nine Doors of Midgard.

“Throughout my adult life, in both the esoteric and academic worlds, Edred’s books have been permanent companions. His books combine structure and academic rigor with a highly effective system for practicing rune magic. He knows all the Nordic languages, runes, and Old Norse and has a strong background as a practicing magician. No runic system is unknown to him, and it is always happy news when new books appear by him or newer editions of his classic works are released. To read the works of Edred is part of the initiation into the secrets of the runes.”

– Thomas Karlsson, Ph.D., author of Nightside of the Runes

“Edred’s Rune Might examines the intriguing and eccentric characters associated with runic esotericism in early twentieth-century Germany, providing both the historical and cultural background necessary for understanding their work as well as a practical introduction to their actual magical techniques. It is a job for which he is uniquely qualified. Up until now, most Anglophone readers have likely caught only fleeting glimpses of this material in the tawdry (and mostly fictional) mass-market paperbacks and midnight movie-style documentaries devoted to ‘Nazi occultism.’ With Rune Might, the first wave of serious modern rune magicians can finally take their place within the more meaningful context of the European esoteric tradition and the history of Western ritual magic. It is a treatment that is long overdue, and one that will be appreciated both by scholarly minded students of the occult and by those intrepid souls who are attempting to revive the runic tradition today.”

“No form of the runes is more controversial--and misunderstood--than the Armanen runes, originally arranged and interpreted by Guido von List and later co-opted by the Nazis, who ignored and undermined their true intent and meaning. Edred Thorsson delves into this fascinating area of rune-work while demonstrating his skill as the foremost figure in speculative runology. He is a scholar-magician who can interpret these runes and the practices associated with them in their true context, and with a careful eye for the legitimate and relevant facts about their sometimes outré associations. Ever mindful that an effective neo-tradition must have deep roots in the true tradition, Thorsson places the Armanen runes in their proper place in relation to the three primary historic rows, while suggesting fascinating practices that lead to a true synthesis of the eternal mysteries behind these runic systems.”

– Toby Chappell, author of Infernal Geometry and the Left-Hand Path

“. . . an instant classic. Edred takes us to the depths of the Armanic runic renaissance and beyond. This is truly a complete and comprehensive edition of Rune Might, one that will stand the test of time. It is required reading for all second degree members of the Knights of Runes.”

– Siegfried, grand rune master of the Knights of Runes

“A welcome development within occult publishing is the increased emphasis on the cultural and historical context of significant traditions, organizations, and individuals. Edred Thorsson has been providing such needed context for years in his many works, and this revised edition of Rune Might is more vital now than ever. Whether one is a historian of the occult in general or someone who specifically wants to understand the relationship between the ancient runic tradition and the recreations of the early twentieth-century rune magicians, Rune Might is essential reading.”

– Lothar Tuppan, writer and producer of audio dramas and master in the Rune-Gild

The Secret Practices of the German Rune Magicians

By Edred Thorsson
LIST PRICE £12.99
PRICE MAY VARY BY RETAILER