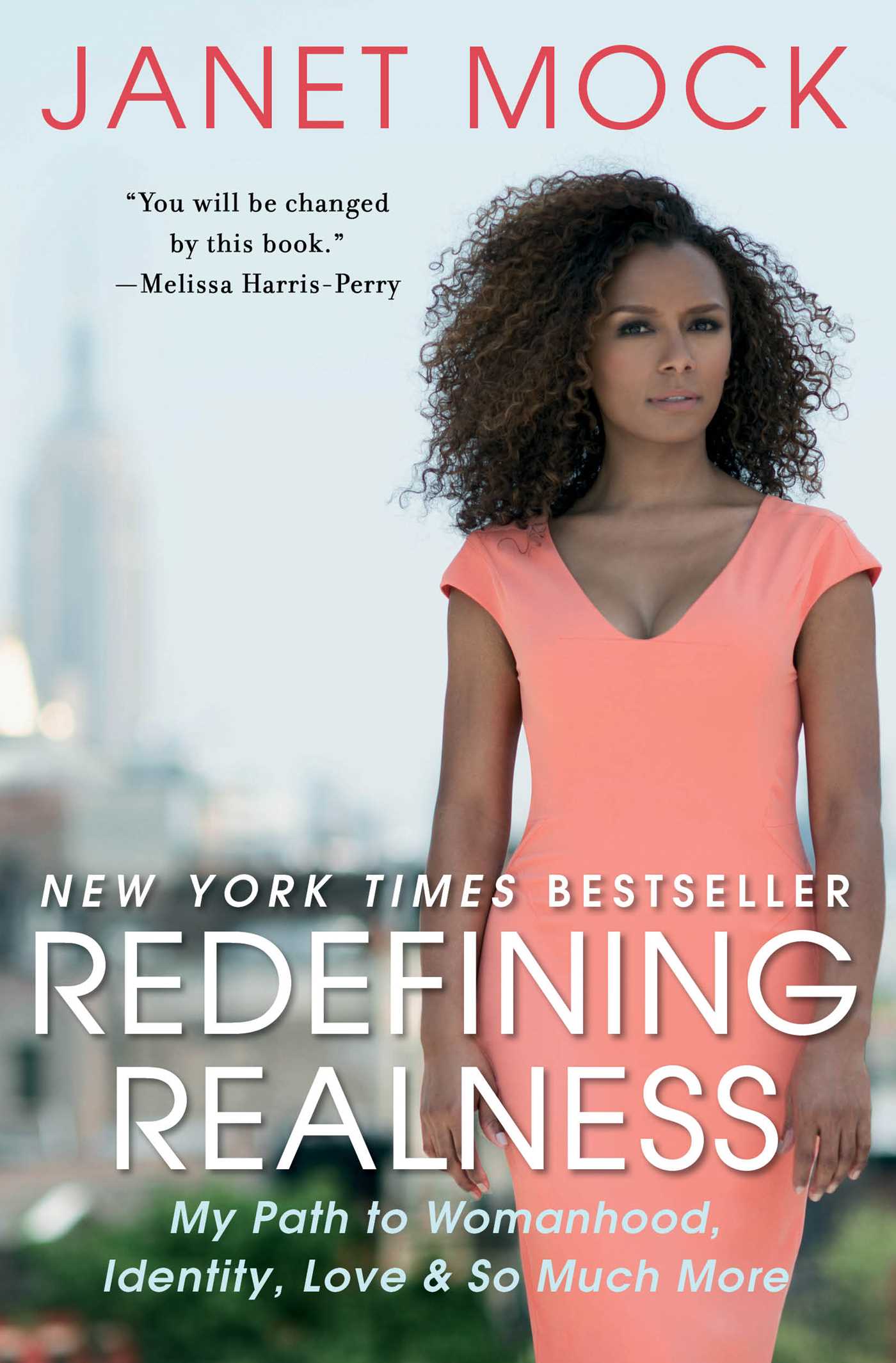 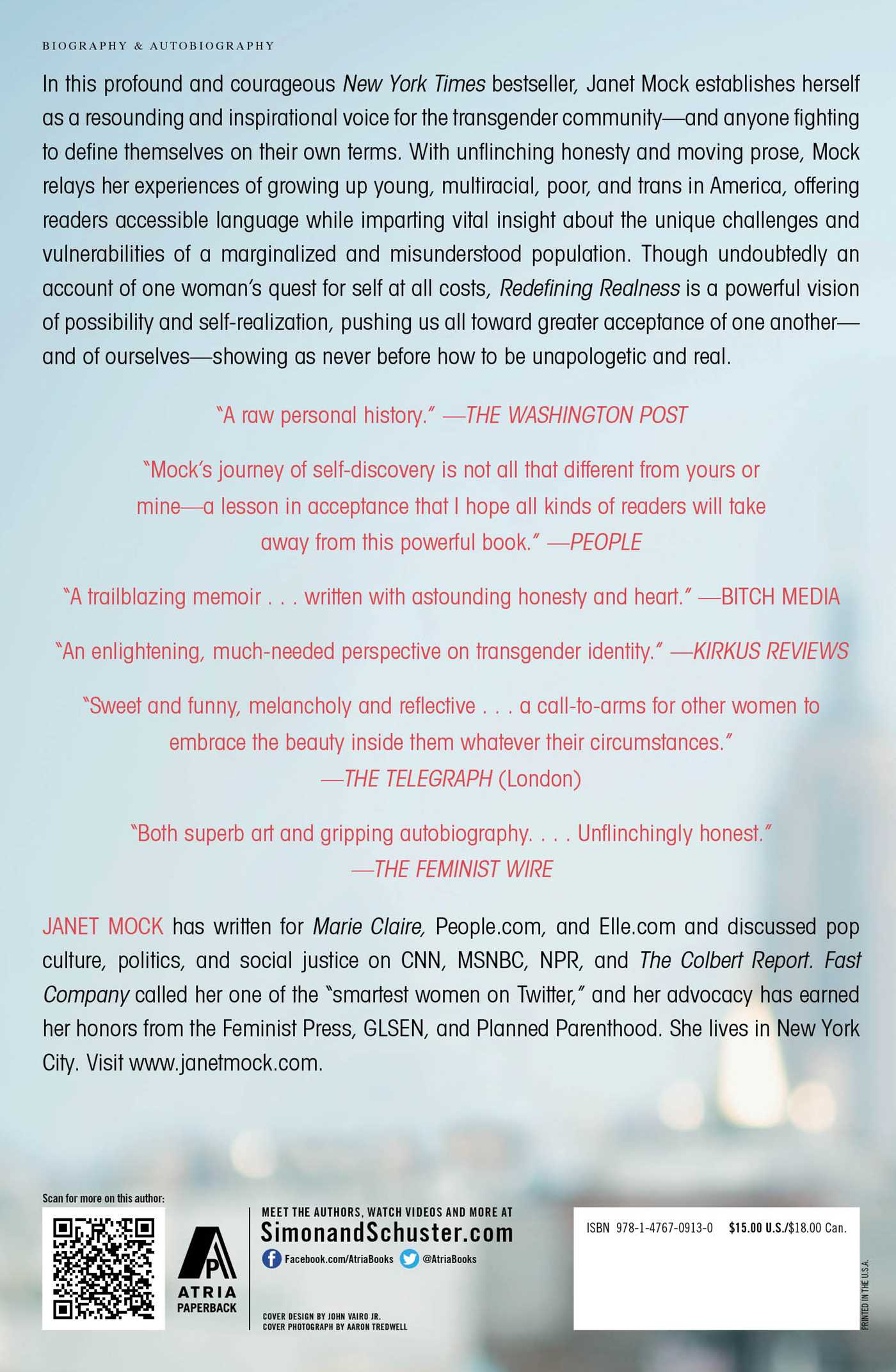 My Path to Womanhood, Identity, Love & So Much More

By Janet Mock
LIST PRICE £10.99
PRICE MAY VARY BY RETAILER

In her profound and courageous New York Times bestseller, Janet Mock establishes herself as a resounding and inspirational voice for the transgender community—and anyone fighting to define themselves on their own terms.
With unflinching honesty and moving prose, Janet Mock relays her experiences of growing up young, multiracial, poor, and trans in America, offering readers accessible language while imparting vital insight about the unique challenges and vulnerabilities of a marginalized and misunderstood population. Though undoubtedly an account of one woman’s quest for self at all costs, Redefining Realness is a powerful vision of possibility and self-realization, pushing us all toward greater acceptance of one another—and of ourselves—showing as never before how to be unapologetic and real.
Author’s Note

This book is my truth and personal history. I have recalled facts, from events to people, to the best of my ability. When memory failed me, I did not seek answers in imagination. I sought clarity through conversations with those who’ve shared experiences with me. When my recollection of events varied from theirs, I sided with my memory and used their voice, often direct quotes, to contextualize events.
Many people featured in the book gave me permission to use their names; others I changed or labeled with an initial to protect their privacy, whether they were guilty, innocent, indifferent, or somewhere in between.
As for terminology, I prefer to use trans over transgender or transsexual when identifying myself, although I don’t find either offensive.I do not use real or genetic or biological or natural to describe the sex,body, or gender of those who are not trans. Instead, I’ve used cis, aterm applied to those who are not trans and therefore less likely toexperience the misalignment of their gender identity and assigned sex at birth—a matter we do not control, yet one that continues to frame who is normalized or stigmatized.
Finally, though I highlight some of the shared experiences of trans women and women of color throughout this book, it was not written with the intent of representation. There is no universal women’s experience. We all have stories, and this is one personal narrative out of untold thousands, and I am aware of the privilege I hold in telling my story. Visit JanetMock.com for more information, resources, and writings. 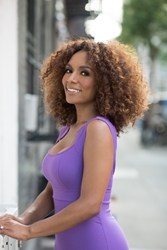 Janet Mock is a writer, TV host, and advocate tackling stigma through storytelling. With a Master’s in journalism from New York University, the Honolulu native began her career as an editor at People.com and went on to write cover stories for Marie Claire, Interview, and The Advocate as well as essays for The New Yorker, The New York Times, and Lenny. She produced HBO’s The Trans List, hosts the podcast Never Before, and serves as a columnist for Allure. Called a “fearless new voice” and “trailblazing leader” who “changed my way of thinking” by Oprah Winfrey, Janet was a featured speaker at the historic Women’s March on Washington. She is the author of Surpassing Certainty and the New York Times bestseller Redefining Realness. Find out more at JanetMock.com.

“Far too many assume that Janet Mock's story is primarily about her body. This book is irrefutable evidence that Janet must be understood through her intellect, spirit, and wit. Janet does what only great writers of autobiography accomplish—she tells a story of the self, which turns out to be a reflection of all humanity. You will be changed by this book.”

“Janet Mock is a glamorous, smarty-pants writer and activist…. Her book about her life as a transwoman, Redefining Realness, isn’t just a service to the trans community but to every woman – hell, person – who has struggled with identity.”

– Lena Dunham, actress and author of Not That Kind of Girl

“Courageous! Told with a spirit of raw honesty that moves beyond confession to redemptive revelation, this book is a life map for transformation—for changing minds. A heart-rending autobiography of love, longing, and fulfillment.”

– bell hooks, feminist, social activist, and author of All About Love

“Redefining Realness is a classic American autobiography. Like Richard Wright and Maya Angelou, Janet Mock brings us into a world we may not know and with breathtaking insight, courage, and masterful craft makes her story universal.”

– Barbara Smith, author of the Truth That Never Hurts: Writings on Race, Gender, and Freedom, co-founder of Kitchen Table: Women of Color Press

"Janet Mock’s groundbreaking book is testimony to the remarkable progress trans people have achieved over the last decade-- and shines a bright light on the work that still needs to be done. Mock’s clear, lucid prose will open hearts and minds, and further the goals of equality and justice--not just for trans people, but for everyone. Redefining Realness is loving, searing, and true."

– Jennifer Finney Boylan, author of She’s Not There and Stuck in the Middle With You

“Redefining Realness is a riveting, emotional, crisply written testimony. I couldn't put it down. I aspire to be as unflinchingly brave! Janet Mock's story simultaneously embodies, complicates, and subverts the concept of American exceptionalism and self-creation.”

– Laverne Cox, actress, advocate, and star of Orange Is the New Black

“Defining oneself is a revolutionary act, and, as described in her memoir, Janet Mock fiercely fought to free herself with exquisite bravery and sensitivity. Redefining Realness is full of hope, dreams, and determination. It is a true American girl story.”

“Every Cinderella story has its problematic step-parents to maneuver around, and its metaphorical fireplaces to clean, before the heroine is whisked off to the ball. Janet Mock’s is no exception. But the real magic here is not of the fairy-tale kind. Redefining Realness overflows with the everyday magic of survival and resiliency in low income communities of color, of loving kindness bursting through the cracks of a hard reality, and of the life-sustaining bonds of family, friendships, and a powerful trans sisterhood.”

– Susan Stryker, author of Transgender History and Associate Professor of Gender and Women’s Studies and Director of the Institute for LGBT, University of Arizona

"Janet Mock's honest and sometimes searing journey is a rare and important look into la vida liminal, one that she manages to negotiate remarkably well, with grace, humor, and fierce grit. Mock doesn't only redefine what realness means to her, but challenges us to rethink our own perceptions of gender and sexuality, feminism and sisterhood, making this book a transcendent piece of American literature."

– Raquel Cepeda, author of Bird of Paradise: How I Became Latina

“An eye-opening and unapologetic story that is much greater than mere disclosure.... An enlightening, much-needed perspective on transgender identity.”

“Mock defies the historically apolitical confines of the transgender memoir, and draws bright lines connecting her experiences to the larger realm of social justice, with a keen political eye that uses her individual experience to elucidate the wider condition of trans women of color in the U.S. Her vivid prose arouses every sense.... Although the book is ostensibly one woman’s coming-of-age story, Mock fulfills grander purposes here; in coming to terms with her own difficult journey she also uses that experience didactically, as if to take the uninitiated, non-transgender reader with her, most certainly achieving 'realness.'”

“...intelligent and educational…. Recommended for lovers of memoirs and for readers with sincere interest in the subject matter.”

“A classic feminist coming-of-age story that’s worthy of your mantel. . . . Her memoir recounts a life that is both hardscrabble and hard-fought, making for a must-read book that is at turns riveting and wonderfully emotionally nuanced.”

“Pardon the hyperbole, but Janet Mock may be the best person ever. . . . A beautiful, powerful memoir.”

“The beauty of Mock’s memoir is that it is both personal and universal; her story is her own, but it also transcends the specificity of her life narrative to touch all of us.”

“Redefining Realness is a rare autobiography in that it reads less like a memoir and more like a conversation with a homegirl. . . . [It] made me feel like I was on my couch with a friend sharing secrets rather than reading a carefully constructed narrative. That, I think, is a gift.”

“Mock’s grace in handling complexity is matched by her frankness, and she talks race, class, and intersectional politics without ever sounding polemical.”

“Mock’s compelling memoir entrancingly chronicles the story of a multiracial trans woman’s becoming within a society that is still widely antagonistic to the non-White, non-male, transgender, and economically challenged among us. . . . Mock has written herself into herstory. And she has done so with clarity and poetic brilliance.”

“Janet Mock shares that which society tells us to keep secret . . . and uses it not only to strengthen herself, and empower other girls but also to educate.”

“Here’s the short version of my review: go buy it and read it now. . . . Mock brings the same bravery and fierce determination that is evident in her history to the writing of the book, claiming her own story and making sure experiences that have often been used to dehumanize trans women and reduce us to our transition status instead serve to give the reader a more full and honest glimpse of her humanity.”

“A memoir that takes the coming-of-age narrative to both a higher and deeper level.”

“It's fully intersectional, deliciously activist, wonderfully unapologetic, brazen, and beautiful. I love Mock's book because, like the best feminist reads, it’s really about the insight that telling stories can be a revolutionary act.”

– Laura Ciolkowski, Associate Director of the Center for the Study of Social Difference and Adjunct Associate Professor of English and Comparative Literature at Columbia University

My Path to Womanhood, Identity, Love & So Much More

By Janet Mock
LIST PRICE £10.99
PRICE MAY VARY BY RETAILER