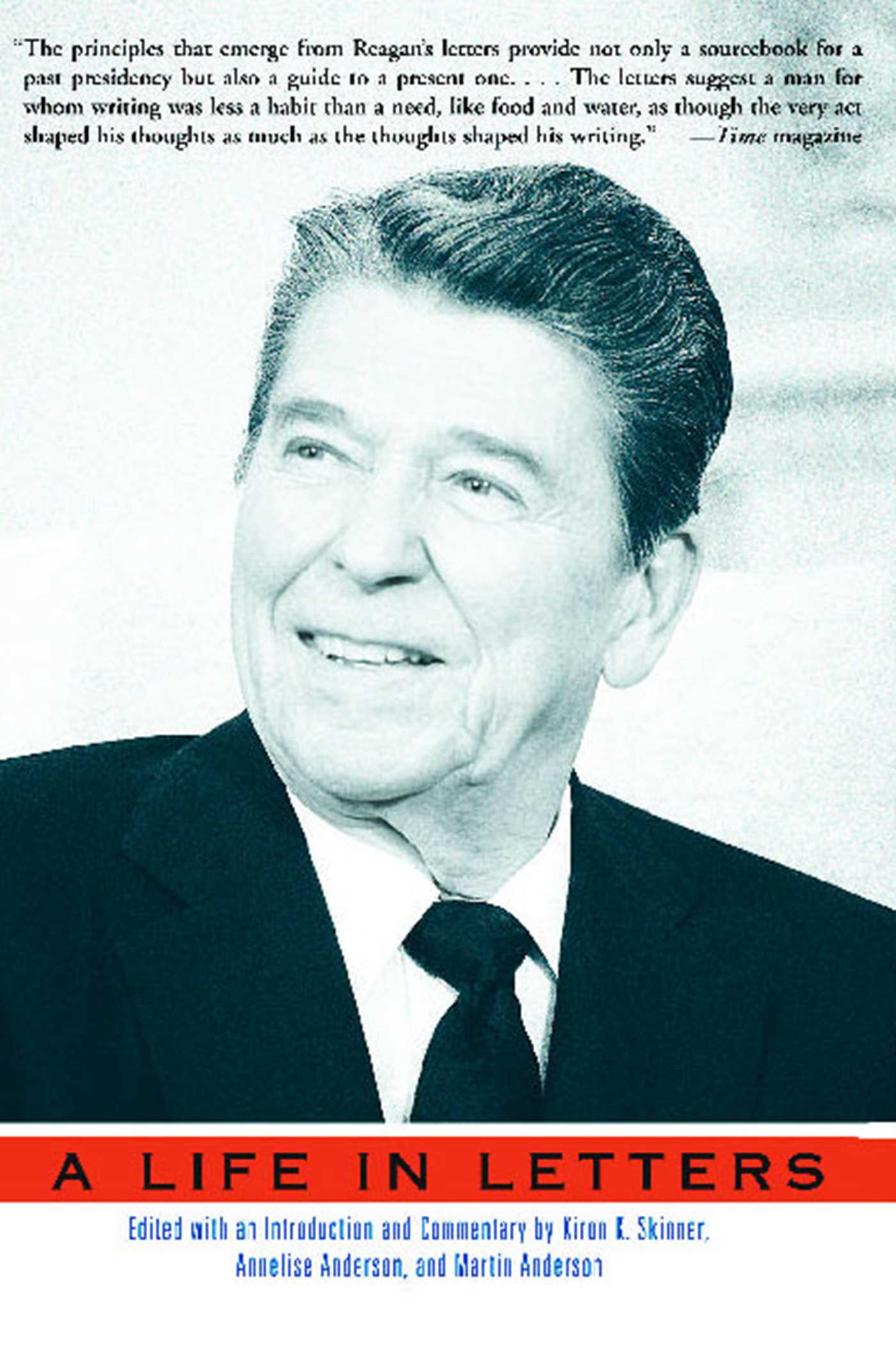 A Life In Letters

Ronald Reagan may have been the most prolific correspondent of any American president since Thomas Jefferson. The total number of letters written over his lifetime probably exceeds 10,000. Their breadth is equally astonishing -- with friends and family, with politicians, children, and other private citizens, Reagan was as dazzling a communicator in letters as he was in person. Collectively, his letters reveal his character and thinking like no other source. He made candid, considerate, and tough statements that he rarely made in a public speech or open forum. He enjoyed responding to citizens, and comforting or giving advice or encouragement to friends. Now, the most astonishing of his writings, culled in Reagan: A Portrait in Letters, finally and fully reveal the true Ronald Reagan.
Many of Reagan's handwritten letters are among the most thoughtful, charming, and moving documents he produced. Long letters to his daughter Patti, applauding her honesty, and son Ron Jr., urging him to be the best student he can be, reveal Reagan as a caring parent. Long-running correspondence with old friends, carried on for many decades, reveals the importance of his hometown and college networks. Heartfelt advice on love and marriage, fond memories of famous friends from Hollywood, and rare letters about his early career allow Reagan to tell his own full biography as never before. Running correspondence with young African-American student Ruddy Hines reveals a little-known presidential pen pal. The editors also reveal that another long-running pen-pal relationship, with fan club leader Lorraine Wagner, was initially ghostwritten by his mother, until Reagan began to write to Wagner himself some years later.
Reagan's letters are a political and historical treasure trove. Revealed here for the first time is a running correspondence with Richard Nixon, begun in 1959 and continuing until shortly before Nixon's death. Letters to key supporters reveal that Reagan was thinking of the presidency from the mid-1960s; that missile defense was of interest to him as early as the 1970s; and that few details of his campaigns or policies escaped his notice. Dozens of letters to constituents reveal Reagan to have been most comfortable and natural with pen in hand, a man who reached out to friend and foe alike throughout his life. Reagan: A Life in Letters is as important as it is astonishing and moving.

You specified that you wanted to hear from me personally, so here I am," Ronald Reagan wrote to a citizen in 1981. And here he is, in his own words, in over 1,000 letters -- to family, friends, colleagues, and often to people he had never met.

This book presents letters by Ronald Reagan written during 72 years of his life, from 1922 to 1994. Reagan revealed himself -- his beliefs, his values, his character, and his policies -- through these private letters. He made candid, considerate, and tough statements that he rarely made in a public speech or an open forum. He enjoyed responding to citizens, and comforting or giving advice or encouragement to friends. Throughout some periods of his life, there are many thousands of surviving letters written in his own hand. We created a database of over 5,000 letters of interest for which we have a hand-written draft or which he dictated. We have found thousands of others of lesser interest, and we believe that there are still scores more in private collections. Over the course of his life, Reagan may have written upwards of 10,000 letters.

Reagan wrote to many people. He wrote to members of his family; to old friends from high school and college; to old friends from his years as a radio announcer, an actor, and a spokesman for General Electric. He wrote to Californians he came to know when he ran for and served as governor. He wrote to people who supported him financially, politically, and philosophically when he was running for president. He wrote to members of the media, some of whom were also friends; to movie fans who became friends and supporters; to heads of government; to civic and intellectual leaders; and to children and young people. Among Reagan's most unguarded correspondents were old friends such as Walter Annenberg, Laurence Beilenson, George Murphy, William F. Buckley Jr., Victor Krulak, and Barney Oldfield.

He also wrote to "uncommon" people, as he called them -- typical Americans who wrote to him about his policies or their problems. Nancy Clark Reynolds, one of Reagan's secretaries during his governorship, reports that "Reagan was willing to talk to anybody. He was willing to write to anybody."

Reagan reached out to people, including his critics, through letters. During the second year of Reagan's presidency, Deputy Chief of Staff Michael K. Deaver put it this way: "I don't think there's a day goes by that he doesn't appear with that yellow pad and say, 'Boy, did I let this guy know what I think.' " Reagan also wrote many letters of sympathy and support. Lindy Fekety (then Lindy St. Cyr), a secretarial assistant at the White House, remembers that she would "sometimes tear up listening to the tapes [on the Dictaphone] and typing up the letters. They were heartwarming and gallant." Chuck Donovan, deputy chief of the Correspondence Unit, saw thousands of Reagan's letters during his eight years at the White House. As he remembers, "It was emotion for emotion....He could be sympathetic for someone who needed it."

Reagan especially seemed to enjoy correspondence with children. At the beginning of his governorship, Reynolds took responsiblity for letters that came from children. Later, she began giving these letters to Reagan, and he continued corresponding with children who wrote to him even during his presidency. "Even though he had tough days," she recalls, "he had an optimistic view of life. I saved children's letters for tough days."

It was not until 1967 when Reagan became governor of California that much of his correspondence was systematically saved. Many early letters survive, however, offering fascinating glimpses into his life.

During his years as governor, from 1967 to 1975, Reagan wrote letters in his office in the state capitol as well as in his home in Pacific Palisades, which he often visited on the weekend. He dictated some of them. It was in these years that Helene von Damm began a practice of giving Reagan a sample of letters drawn from the large pool of incoming correspondence so that he could have a sense of what people thought about his policies and what was happening in their lives -- and he would often respond.

After his governorship and before his presidency, between 1975 and 1980, Reagan's offices were in Los Angeles, California, at the public relations firm started by Michael K. Deaver and Peter Hannaford, both of whom had worked for him as governor. Some of Reagan's letters were written by members of his staff (and therefore have been excluded from this volume). Reagan personally wrote a substantial number of letters during these years. As was the case in his governorship, he both dictated and wrote letters by hand. Between 1979 and 1980, for example, Reagan dictated over 800 letters.

When a president assumes office, he inherits the Correspondence Unit, a White House department that assists with all facets of presidential correspondence. The Correspondence Unit has many sections, totaling some 60 people in the 1980s, but the office of the Director of Correspondence is the section that is most directly involved with the Oval Office. President Reagan appointed Anne Higgins to the directorship.

Only a small number of the 10,000 to 12,000 pieces of mail sent to President Reagan each day ever reached his desk, and through several means. One was a special code. Family and friends were instructed to write on their envelope a sequence of numbers chosen by President Reagan. These letters bypassed normal White House channels. Letters from the public reached President Reagan through Higgins's office. Following the process established during Reagan's governorship, Higgins and her staff passed along letters that were "representative...of a large number of opinions." Every few weeks, Higgins would provide the president with between twenty and thirty of them. A cover sheet would be attached to the sample, and it would give a tally of positions on policy issues from the larger pool of letters being received.

President Reagan also had extensive correspondence with American and foreign leaders. Even if some of these letters were sent to the Correspondence Unit, they were not typically answered by staff. Letters from leaders of closely allied countries, such as Canada, Great Britain, or Japan, might go to the National Security Council for review, but letters to leaders for whom President Reagan had developed a close personal relationship were sent to his office. Many of these replies were written by President Reagan himself.

President Reagan wrote wherever he was and whenever he had time to write. He wrote letters in the Oval Office, in his study at the White House, at Camp David, on the helicopter ride to Camp David, and on long trips on Air Force One. Some of these locations were listed on his stationery.

President Reagan often wrote letters during weekends at Camp David on yellow legal-size paper, ready for typing on official stationery. Higgins recalls that "he was a secretary's dream because he had all the information on the top [of the letter]: the name, the address, the zip code, and the telephone number if there was one....[Reagan] didn't need editing. They [his letters] were fine. Everything was usually perfect." Higgins adds that President Reagan "would write on both sides of the yellow pad. He didn't waste the paper."10 Reagan dictated 265 letters during his presidency, but discontinued the method in February 1982 because he preferred writing by hand.

It became immediately apparent to the Correspondence Unit staff that writing letters was important to President Reagan. A few days into his administration, the White House Post Office called Higgins to report that someone was using the president's stationery because sealed letters on his distinctive pale green stationery were arriving in the post office. It was discovered that President Reagan was writing letters and sealing them so that they could be mailed.

After President Reagan left the White House in January 1989, the number of letters he wrote declined substantially. His methods, however, remained the same. He continued to write to family, friends, colleagues, and well-wishers by hand, though many were typed and some were written by staff. He wrote letters in his office in Los Angeles, at his home in nearby Bel Air, and at his ranch in the mountains near Santa Barbara.

In a letter dated November 5, 1994, Ronald Reagan informed his "fellow Americans" that he had Alzheimer's disease. Attention was focused on the message, but the medium was itself something of a statement. He might have used television or radio, but instead he said goodbye in a letter.

Kiron Skinner is an assistant professor of history and political science at Carnegie Mellon University. Her articles have appeared in the Wall Street Journal. Annelise Anderson was an advisor to Ronald Reagan's 1980 presidential campaign and associate director of the Budget Office, 1981-1983. Martin Anderson served as a special assistant under Richard Nixon and as chief domestic and economic policy adviser to Ronald Reagan.

A Life In Letters